Brunch comes in all shapes and sizes. We are open to all that the brunch world has to offer: the fancy, the cheap, and the casual alike. At Jaco Juice and Taco Bar in Georgetown, the brunch isn’t big on formalities, but it’s pretty big on flavor.

The space kind of resembles a surf shack you’d find in LA (LA natives please refrain from any angst for the non-Cali-swagged-out smoothie/Mexican concept you’re about to read about). It has bright colors everywhere, cucumber water as you enter, and laminated menus that remain by the counter where you order. 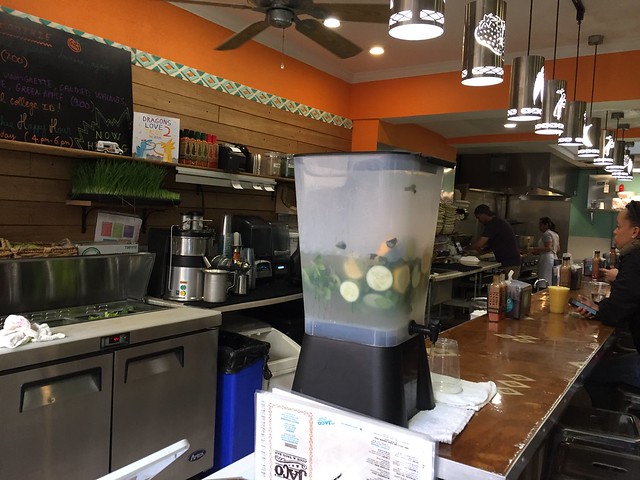 Jaco also has an awesome patio to enjoy when the weather warms up. I came in on a cold Saturday morning with a friend before a day of some Georgetown shopping. The only place to sit inside is along the bar, but the vibes are good and it’s definitely comfortable (if you can get a seat).

I always prefer to start my day with something sweet and my friend, Katie, likes the savory stuff, so it worked out perfectly that this Mexican inspired meal was filled with both savory and sweet options.

We got a classic acai bowl, a peanut butter acai bowl, the raging bull burrito, the Hot Mess Burrito, chips and guac, and the Island In the Sun smoothie, which was made with banana, mango, and pineapple. It was probably too cold out to order an acai bowl, but that didn’t stop me. 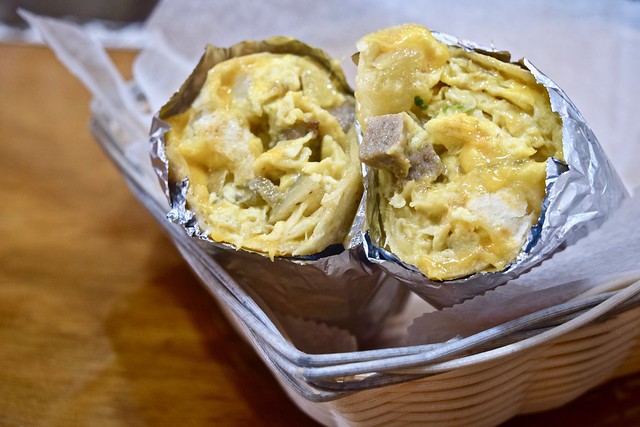 Katie’s burritos came out first, which I thought was weird considering a smoothie bowl doesn’t require any cooking. The burrito was a great size and came with some acidic and tangy salsa. Inside was sausage, a cheese blend, and onions. 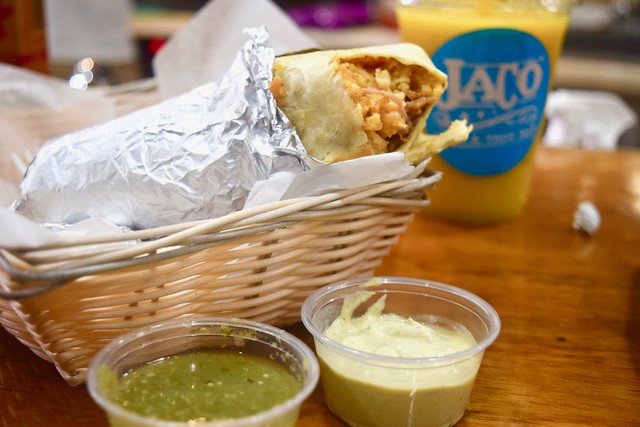 The sausage was slightly spicy, but balanced well with the fatty cheddar cheeses. We do wish it came with some sour cream or other dipping sauces, but the taste was generally what you’d want out of a breakfast burrito. The Raging Bull burrito had way more flavor, as it included rice and pork, but it was also seasoned more heavily.

We definitely preferred the Raging Bull to the breakfast style burrito. This one did come with sour cream and salsa verde. Both were great savory options and we would recommend either. 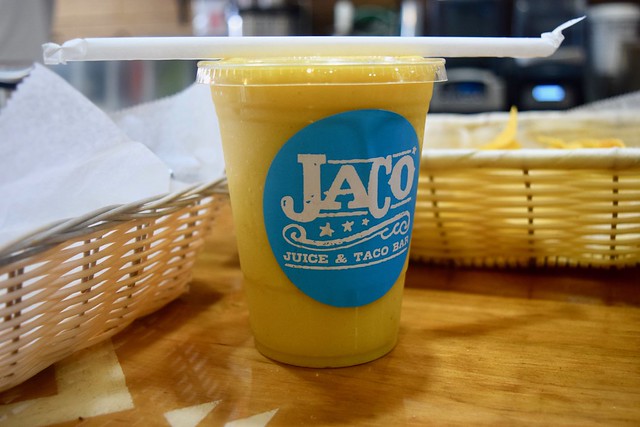 The smoothie arrived shortly after. Although it was the smaller of the two smoothie sizes available, it was still pretty substantial. The Island In the Sun was super sweet, but not syrupy, and you could really taste both the mango and pineapple (sometimes banana can overpower a smoothie). The smoothies are also under $7.00, which is pretty good considering the pricier options out there. 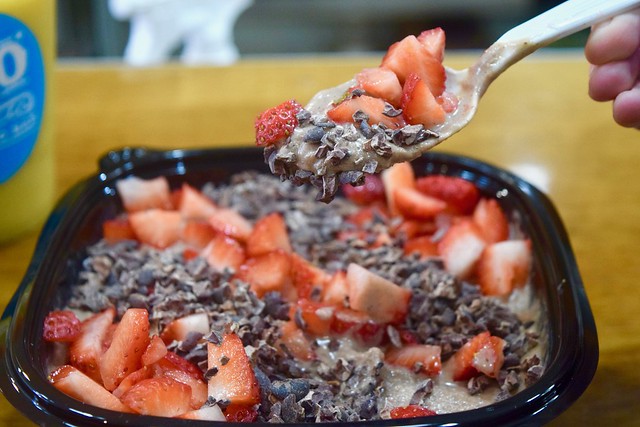 Next came the acai bowls. There must have been at least 7 servings of peanut butter in this pb acai bowl, but we aren’t complaining at all. We had both eaten many acai bowls in our day, and this one, despite it not being the most elegant, was definitely one of the most delicious.

The acai was not overly acidic, it was really thick, and was not icy at all. Their homemade granola is perfectly crunchy and crumbly and they don’t hold back on the portions of  it (or any of the toppings for that matter). 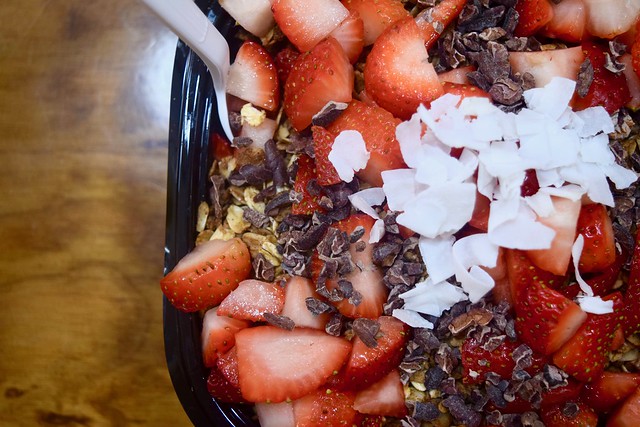 The classic acai was also delicious, just less heavy and less decadent. The bowl was really refreshing, but still comforting with the cinnamon granola, crispy coconut, and chocolatey cacao nibs. These bowls, dare I say, may be better than the famous ones South Block serves just down the street. 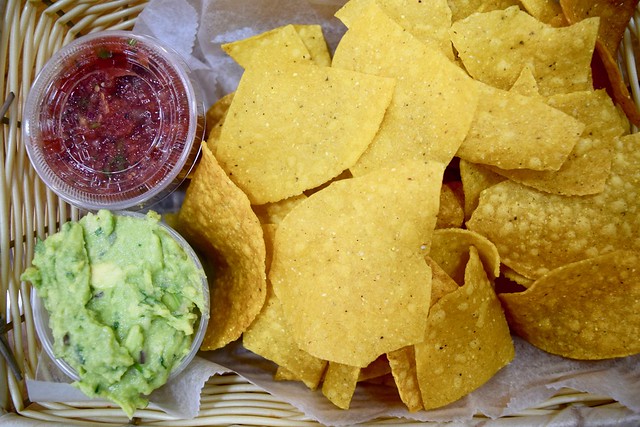 Last, but certainly not least, came the chips and guacamole. This guac was awesome. The chips came in a huge basket and the guac was perfectly garnished with citrus and not overly consumed by onion or cilantro. The salsa was also incredibly fresh and chunky, with visible cuts of tomatoes and onions. We would come back just for this creamy, vibrant guac.

Since we sat at the bar, we were rather engaged with the cooks, bar tenders, cashier, and servers. While they were for the most part accommodating, one was pretty sassy and made snarky remarks about customers modifying their orders too much. We agree that’s probably an inconvenience, but the customer is always right, right?

We were super delighted with the large flavors coming out of this tiny juice bar and taco joint. If we weren’t so inclined to try so much food, Jaco could be a great option for a healthy brunch with the gals, yet it could easily also be a place for a greasy, hangover indulgence; really, it’s a win-win.

The Bitches say: B+. We can look past the salty cashier, and the fact that our food came in a weird order because the vibe at Jaco is super chill and the food is super fuego.