There’s nothing like a good neighborhood restaurant. It’s familiar, cozy, and—most importantly—you never have to wait for a table. I’m constantly in search of these local gems, though they are seemingly few and far between in Washington’s booming see-and-be-seen culinary scene.

With this notion in mind, my brunch date and I headed to Brookland’s Finest, just on the other side of Rhode Island Avenue, to try our luck at said neighborhood spot. It’s too bad it wasn’t a nicer day, because the wrap-around patio looked delightful. We shrugged and agreed it was reason enough to return. 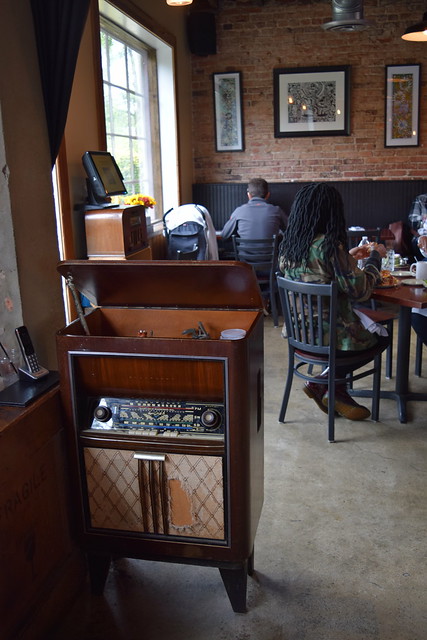 Brookland’s Finest was bustling with families, graduates, and couples alike. A charming vintage record player served as the hostess stand and immediately set the tone for the laid-back, gastropub vibe. 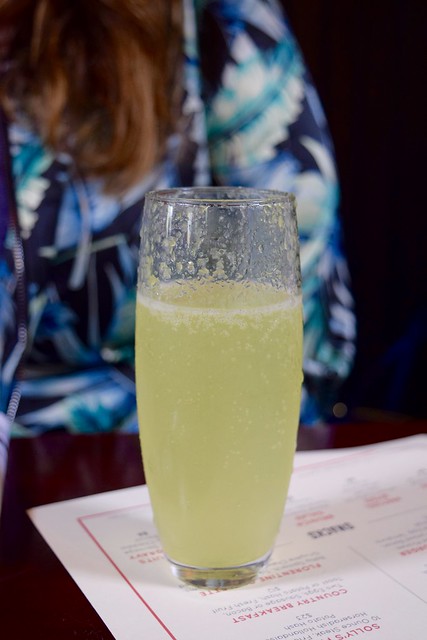 We were quoted a 10-minute wait, so we huddled at the bar and browsed the brunch cocktail menu. We were pleased to see that many of the brunch cocktails were made with local spirits from Right Proper and One Eight Distilling, to name a few. I went with the cucumber Brookland’s special. It tasted like a light, green juice—it even had pulp!—that was spiked with Prosecco. My date went with an Irish coffee, as she was trying to be productive later that afternoon. Good for her. 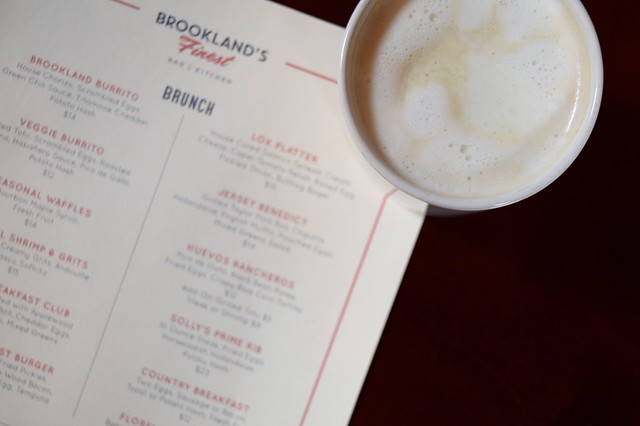 Once we were seated—in less than our quoted time, I might add—we were rearing to go. The menu is essentially upscale bar food, with a burger that looked out of this world. (We eyed several on our way to our table.) 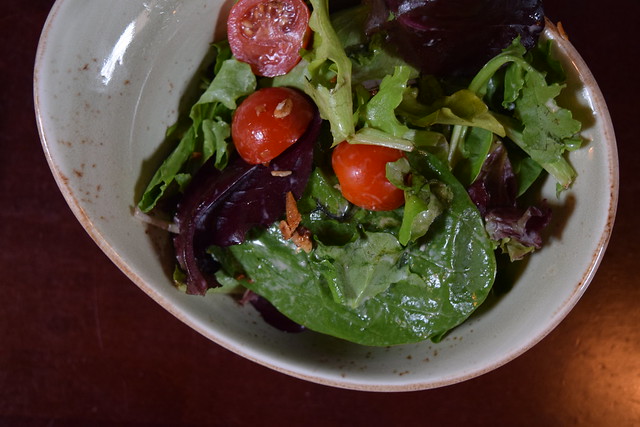 Yearning for some veggies in our lives, we were intrigued by the house salad on the menu, as it came topped with pears, apples, and house granola. We were right to be skeptical because it tasted as odd as it sounded. And there were no pears or apples to be found. 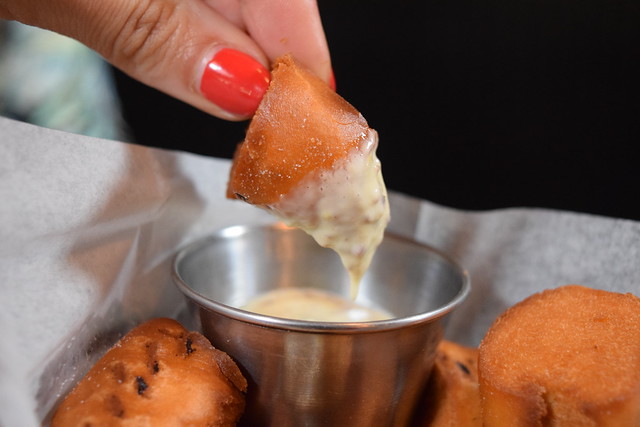 The pretzel bites, however, were next level. They were made with truffle oil and served with whole grain mustard. Salty with a crispy shell and a warm soft center, they weren’t on the table for long. 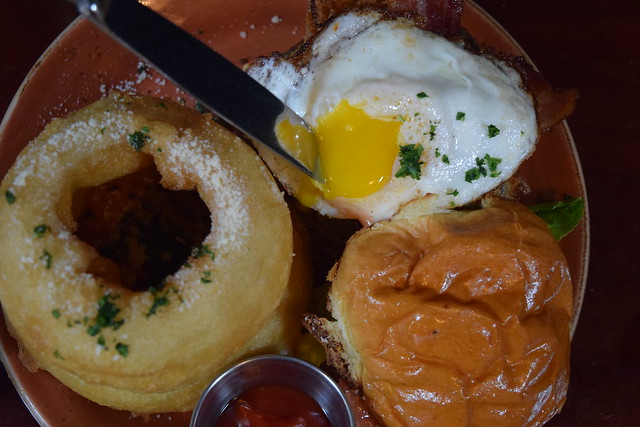 Our entrees came out before we were done with our appetizers, so we shuffled our plates around, making room for the enormous burger. The burger was top notch. It was not only a solid helping of meat, a fried egg, bacon, and pickles, but the brioche bun held its integrity and didn’t saturate in a way that made it a messy undertaking. The proportions were spot on. Although, the onion rings were aggressive. Maybe we’re just not onion ring girls? Give us the fries, please. 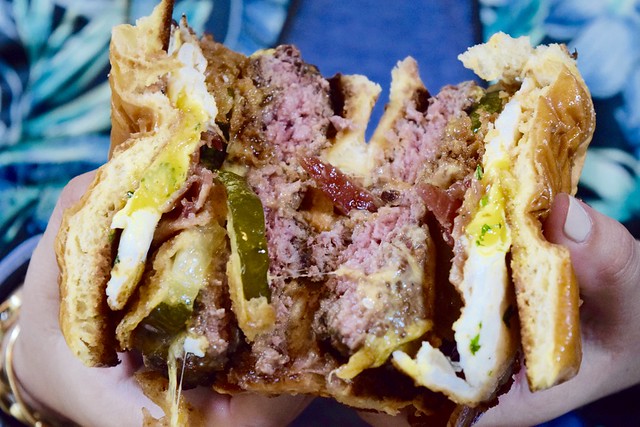 Debating between the seasonal peach pancakes with whipped cream and Bourbon maple syrup, the Jersey Benedict, and the country breakfast, I opted for the latter, mainly because I prefer savory dishes to sweet. (And, I knew we were making Benedicts for Mother’s Day the following morning.)

The country breakfast came with two eggs, any style, bacon or sausage, a fruit salad, and hash browns. In comparison to the burger, the country breakfast definitely felt a little skimpy, but for me it was the perfect portion. The hash browns were more like a latke, and a bit tough to cut through. The eggs were cooked perfectly, as was the bacon. 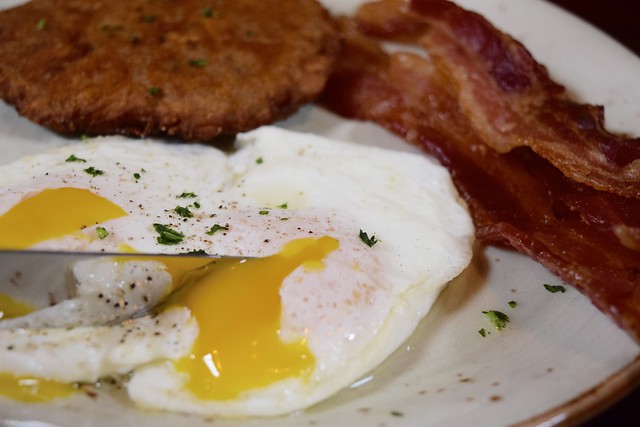 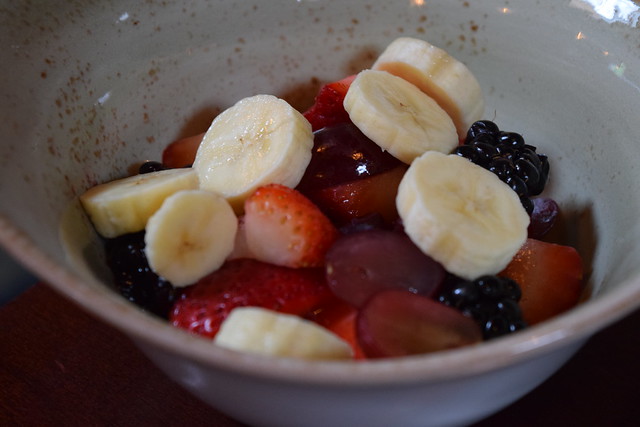 By the end of our meal, we were surrounded by recent Howard University grads, making us nostalgic for those carefree, post-college summers. So, we threw back another one and proceeded to attempt to adult for the remainder of our Saturday.

The Bitches say: B-. A cozy, neighborhood bar serving better-than-average bar food, for brunch. We’ve heard they serve a solid dinner, so we’ll be back to try our luck, hopefully on the patio.