With so many new restaurants opening in and around the DMV area, we often forget about the tried and true establishments that remind us how far the food scene in our nation’s capital has come. After all, those are the eateries that likely inspired a sea of others. With that in mind, I wanted to introduce my out-of-town guest Andrea to a longstanding spot I’m sure most of our readers have visited: Brasserie Beck. 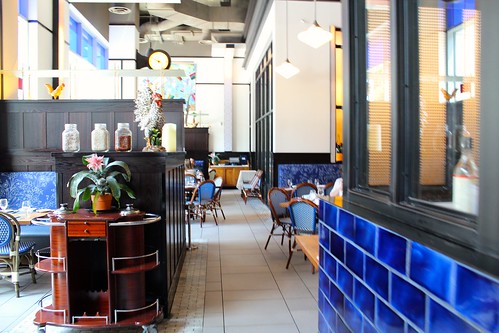 Open since 2007, you can find this contemporary European restaurant on K St., near the Mt. Vernon area of town. Hues of blue catch your eye upon entering, complete with wine bottles of various sizes along the counters. The bar is reminiscent of one you’d find in a Belgian bistro across the pond. The staff was especially gracious and treated us to a delightful array food and drinks before we set out on an afternoon of sightseeing. We’ve reviewed this classic establishment once before – all the way back in 2011. Eight years later, we wanted to see if it still lived up to our delicious memories. 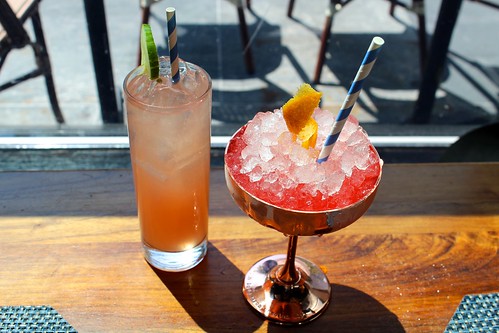 We perused the menu in search of a cocktail that could help us cool off from the blistering summer heat. I ordered the “pear ginger fizz” while Andrea opted for the “Casablanca.” You won’t find your standard brunch libations here. The spirits pair nicely with their mixers, and after one – you’ll want to sample their entire spread. 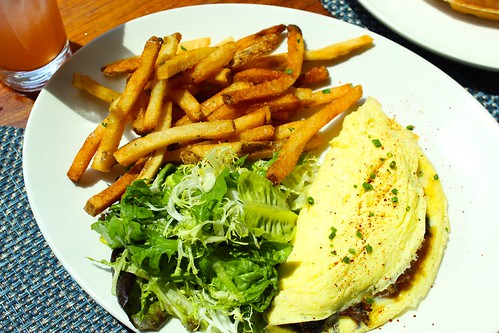 I’ve been on a savory kick for brunch these days, and on this particular day, I wanted something hearty with a little grease and green on the side. You know… balance. Eventually I settled on the wild mushroom and Gruyère omelet, and Andrea went the opposite route with the Belgian waffle. Light, fluffy and seasoned to perfection, the omelet seemed large at first but ended up being the perfect portion alongside both its accompaniments. Mushroom fans, you won’t be disappointed if you order this. The crispy frites were just as described: crackly and super satisfying sans condiments. 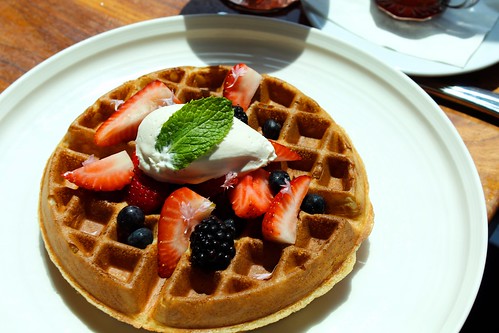 The bourbon maple syrup was the highlight of the Belgian waffle order. A slightly bitter aftertaste complements the sweetness of the pastry, whipped cream, and fruit. We also ordered a side of thick, applewood bacon. After one bite, we both determined they were somewhat reminiscent of a bacon platter you can find in our suburban hometown in Missouri. 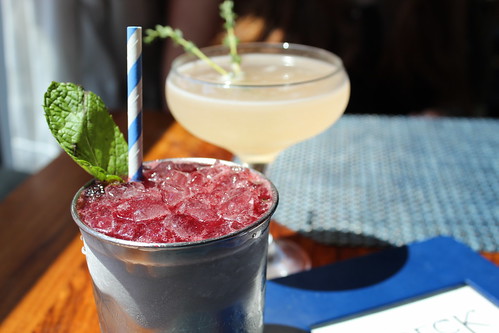 We couldn’t leave without tasting one more drink. This time we went with the blackberry julep and the necromancer. We remarked our favorite authors Ernest Hemingway and F. Scott Fitzgerald would probably drink both libations in the midst of writing their literary classics. The julep doesn’t have that strong minty taste that often deters people from this festive cocktail. Instead, our tastebuds were met with tartness from the blackberry, bringing a flavorful balance to the bourbon. Honey lovers will enjoy the sweet aftertaste of the necromancer, but will appreciate that the smoky notes in the Johnny Walker Black were understated, blending well with the other flavors. If you’re looking for an escape from mimosas and Bellinis, consider opting for an afternoon at Brasserie Beck.

In a city with ever-changing food trends, Brasserie Beck remains a staple to D.C.’s eclectic food culture. This place remains intimate enough to satisfy any occasion – from a date to a girls’ outing.