The interior is dark and accented with wood and leather furniture, exactly what one would expect from a bourbon-focused restaurant. Looking for the best lighting for photos and anxious to enjoy the beautiful weather, Chris and I decided to sit outside, with our one regret being that we didn’t bring our dog Buster along for brunch. What were we thinking?! 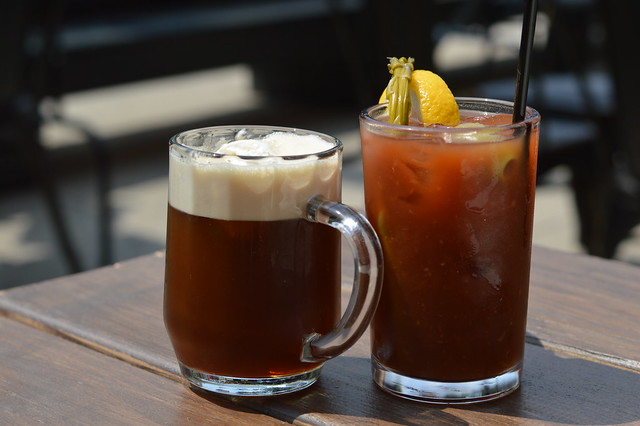 Bourbon on Division was not very busy considering that it was Lollapalooza weekend, or it might just have been that it isn’t well known yet for brunch. The restaurant is new and in an area that is filled with brunch spots. Either way, we were happy to have the patio almost to ourselves. Hot and thirsty, we ordered libations from the cocktail menu, which was heavily bourbon focused, unsurprisingly.

At the recommendation of our kind and enthusiastic server, Chris ordered the “Helluva Way to Wake Up,” an iced coffee concoction made with Old Forester, a honey rosemary syrup, and a delicious and unique whipped bourbon cream. Chris absolutely loved this drink, which says a lot as he normally wouldn’t go for something like this.  I went with the “Bloody Widow,” a Bloody Mary made with bourbon. It was just okay, but that may be because I am partial to Bloodys with vodka. Or, maybe it was just too early for bourbon for me. 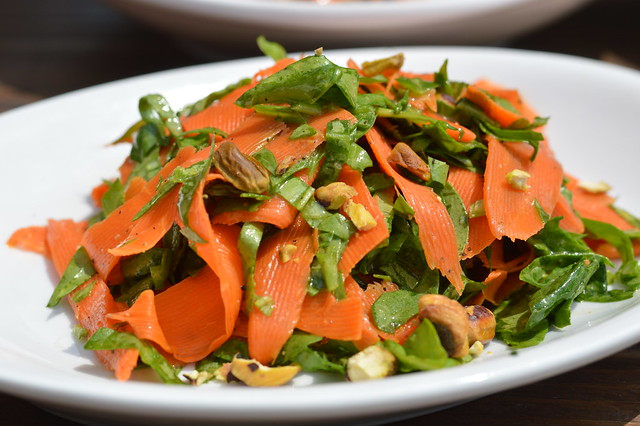 We decided to order a few plates to share. The restaurant offers elevated Southern dining, so I was looking to try some dishes with Southern flair. We decided to start with the carrot salad, something I can never resist on a menu. Made with smoked shaved carrots, spinach, pistachios, pickled mustard seeds, and topped with a honey-lemon vinaigrette, this salad sounded like it was right up my alley.

Upon presentation, the carrot salad looked colorful and beautiful. Unfortunately, after tasting it, I didn’t experience the intense flavors I had expected from the dish. While it was still delicious, it just tasted like crisped carrots and spinach to me. Neither the mustard seeds nor the pistachios added much flavor to the dish; and the lemon vinaigrette was just average. 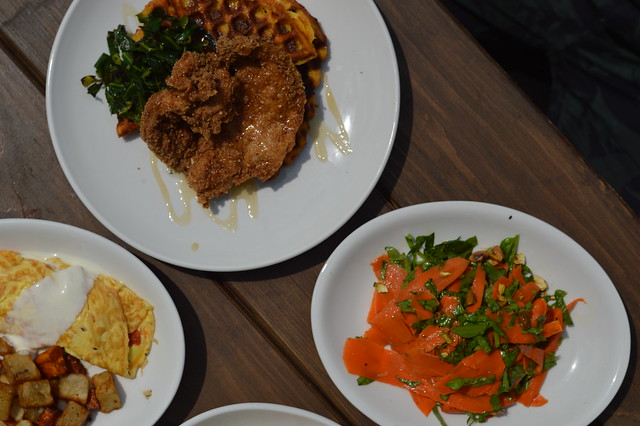 We ordered the house omelet to have a breakfast dish in the mix.  It was stuffed with corn, freshly smoked tomatoes, arugula, and it came topped with crème fraîche and served with a side of house potatoes. 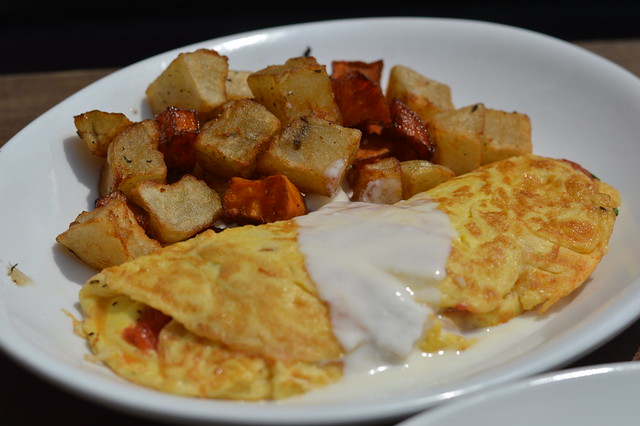 This omelet was light, fluffy, and delicious. Although, because of the heat, the crème fraîche quickly melted, making the omelet a little soggy. Nonetheless, this was a perfectly portioned dish and we enjoyed it. The potatoes were yummy, too. 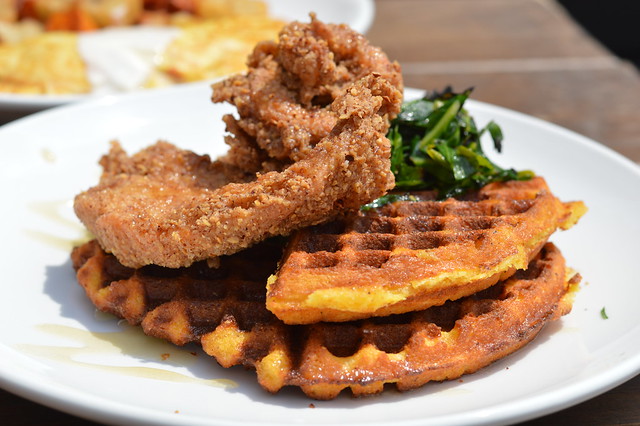 For a little added Southern comfort to our meal, we decided to be gluttonous and go for both the spicy pecan fried chicken atop a corn waffle, and the grilled shrimp and white cheddar grits. The fried chicken looked awesome, and it was. A hint of paprika added to the smokiness of the fried chicken, and an apple honey butter complemented the pecan crust perfectly, for a hint of sweetness.

The corn cake was served with grilled greens that brought together the dish nicely. It was the perfect combination of sweet and savory, and it tasted like the South in your mouth. One bite of the chicken, corn cake, and the greens together was heaven, and hit the nail on the head when it comes to elevated Southern comfort food. 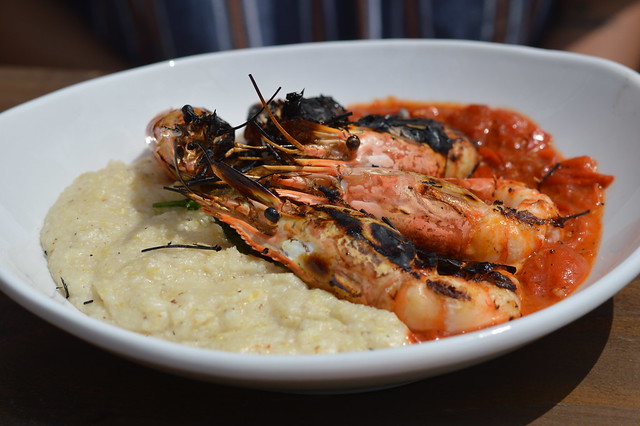 The shrimp and grits came presented to the table with a bed of cheddar grits surrounded by fresh and whole Gulf shrimp, complete with their heads on. Now Chris is not much of a shellfish eater, but he can get down with some shrimp and grits. Surprisingly, he had never seen the shrimp with heads. I explained to him that he shouldn’t be intimidated; the heads provide lots of flavor, and can actually be really delicious to suck on after removing them!  When cooking with shrimp, it is often recommended that you add the heads or tails to pasta water or to the sauce to add more flavor; they really are fantastic. 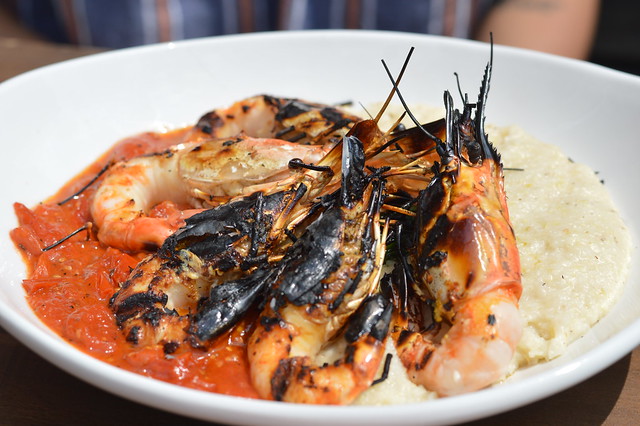 Unfortunately, these had been grilled, and in my opinion too much so. The heads were crispy and blackened, to the point that they were neither aesthetically pleasing nor edible. Additionally, upon removing the heads, the charred shells proceeded to break all over the dish and got into the grits, adding a burnt flavor to them. Had the shrimp been pan fried, I think they would have been perfect, but for myself and Chris, the burnt, whole shrimp were just not appealing. Additionally, the bulging blacked eyes of the shrimp were just a little too much for us.

Ultimately this was our least favorite dish. Despite our disdain for the shrimp, though, the grits were delicious. And, the smoked tomato gravy was flavorful, adding a delicious acidic component to the dish. Again, had the shrimp been prepared differently, we would have had a far different opinion of the dish. 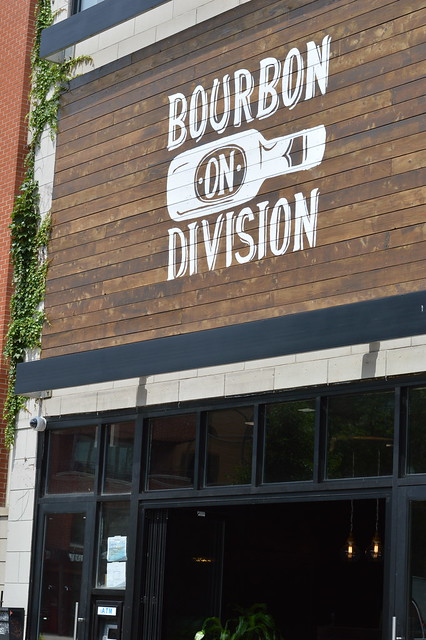 Overall, Bourbon on Division is a great addition to the neighborhood. I think that they do respect Southern cooking and will provide a fresh take on classic dishes. We attended brunch the second or third week since its debut, so I believe they just have a few kinks to work out. The staff is friendly, and the cocktails are fun. The food had both hits and misses, but it won’t deter us from returning for dinner and checking out the evening menu offerings. I hope that Bourbon on Division is not just another restaurant that is thrown in to the mix of the many spots already present on Division in Wicker Park, and that it doesn’t get lost in the chaos of its surrounding competitors. The restaurant will have to perfect the dishes and continue to incorporate exciting bourbon elements into the menu for it to be successful, and I hope it does just that!

The Bitches Say: C+. IT has room for improvement, but Bourbon on Division is a new and adventurous addition to the restaurant scene on Division Street in Wicker Park. With Southern cuisine and unique cocktails, this spot is great for a Southern patio brunch on the weekends, or a place to get buzzed off of bourbon libations.

Bourbon on Division serves weekend brunch on Saturdays and Sundays from 11 a.m. until 5 p.m.