“That’s quite a lot of food,” the South African waitress said to me, wide-eyed.

“It’s work, you see,” I replied as she looked at me skeptically and walked away.

I had ordered three entrees for one person—but only after begging her to extend brunch 20 minutes beyond the 11 a.m. conclusion time. It had taken me quite awhile to get my suitcase, stuffed with new purchases, closed, you see.

The kind waitress had obliged, once I explained this was our last meal before flying home to America, and that I lived for brunch. I’m so glad she did. 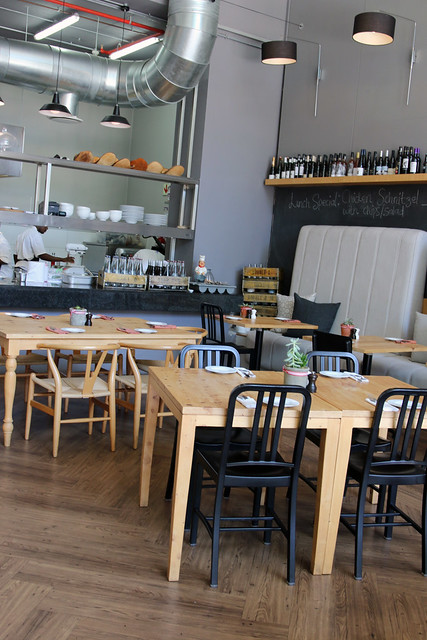 Borage was touted as one of the better spots for breakfast and brunch in Cape Town. The high-end restaurant is located in the lobby of one of Cape Town’s only skyscrapers, in the downtown district. Outside, there’s a spacious patio. Inside, it’s high ceilings, wooden tables, chalkboard specials, and padded booths on one wall of the restaurant. 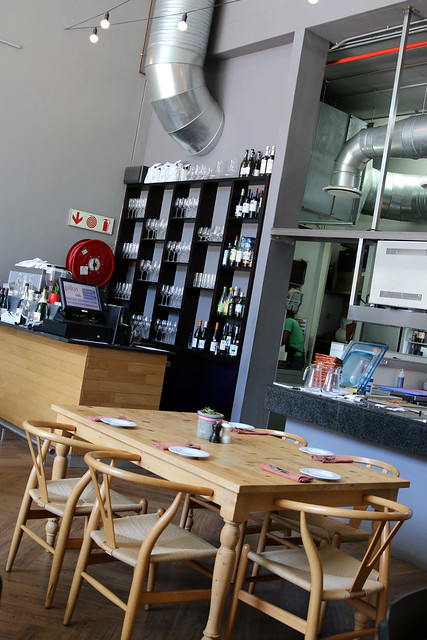 We sat down and watched the kitchen staff preparing the last plates of brunch in the open kitchen. We discovered that brunch was about to finish, and I proceeded to beg the waitress to allow us to order this most important meal. 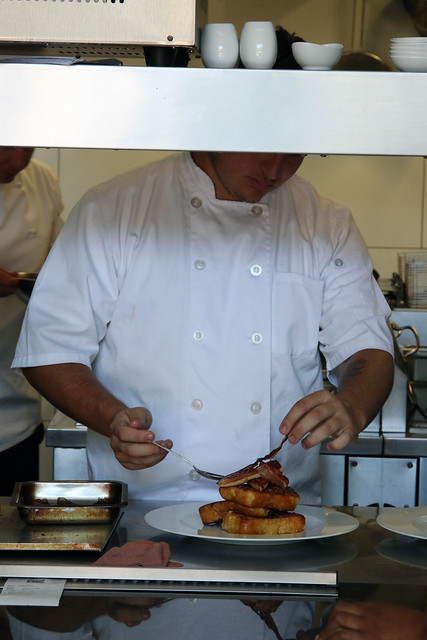 We ordered right away—and the coffees arrived at our table quite quickly. Lauren had a flat white which arrived with a beautiful latte art heart, and I ordered an Americano, the way you’ll receive a coffee if you order black coffee abroad, i.e. espresso with water. Both were delicious, as Borage sources its coffee from Truth Coffee Cult, one of the many local coffee roasters in Cape Town. 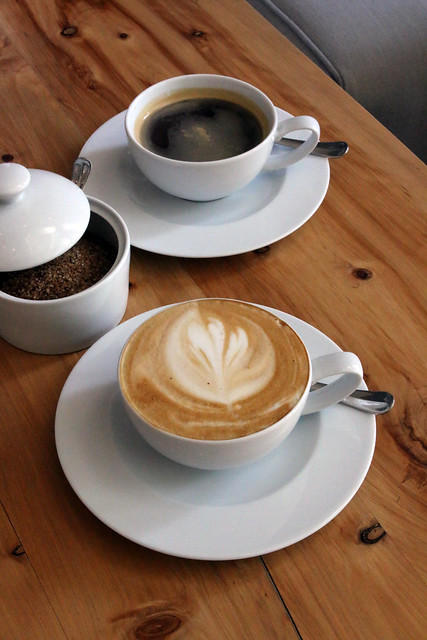 In the name of brunch, I worked my way through three entrees: yogurt and fruit, Eggs Benedict, and French toast. All in the name of research and fueling up before an 18-hour flight. (By the way, the breakfast on South African airlines is not that bad!) 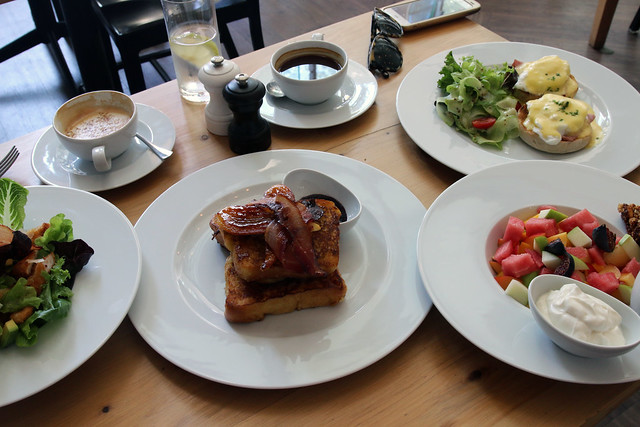 The Eggs Benedict at Borage was traditional in the best possible way. The English muffins were fluffy, warm, moist, and lightly toasted. Atop the muffins was a folded slice of ham, a softly poached egg, and the perfect amount of Hollandaise. The Hollandaise was light and smooth with a strong taste of lemon. I loved it, as did Lauren. The dish was served with a side salad of beautiful, large leaves of Bibb lettuce and cherry tomatoes dressed in a light vinaigrette. 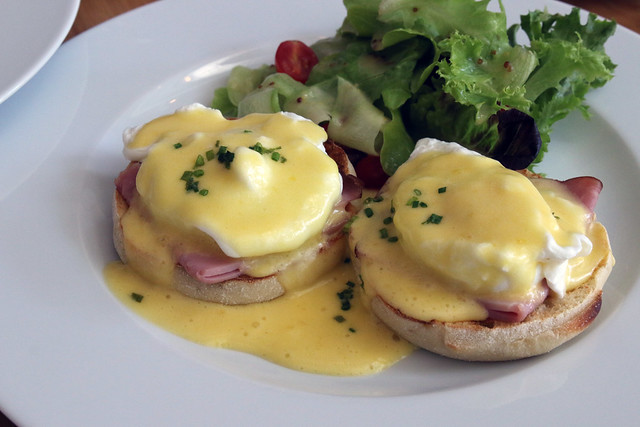 At our first brunch spot, Athol Place in Johannesburg, I had discovered that South Africa likes its savory French toast, and that was fine by me. The French toast on the menu at Borage was a sweet-and-savory combo that sounded delightful and the caramelized bananas were the reason for the game-time decision.

The dish arrived with Texas toast style bread: three thick, toasted slices of white bread stacked atop one another. Atop the pile of bread were large slices of caramelized bananas and crispy pancetta. Alongside was a house-made berry compote. I disassembled the plate and slathered a piece of bread with berry compote before restacking the bananas and pancetta, enjoying each perfectly composed bite immensely. 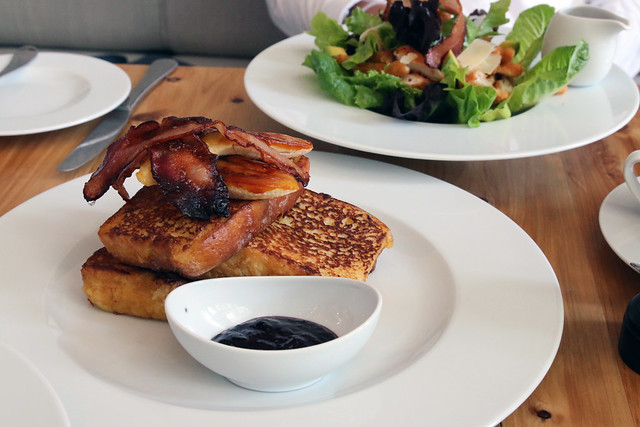 “I’d already had my heart set on lunch,” Lauren said apologetically in her own defense for ordering a salad. No problem, I had us covered. The chicken schnitzel salad was delectable. The enormous bowl was filled with large, fresh greens and topped with pancetta, tomato and avocado, and dressed lightly in a honey mustard. 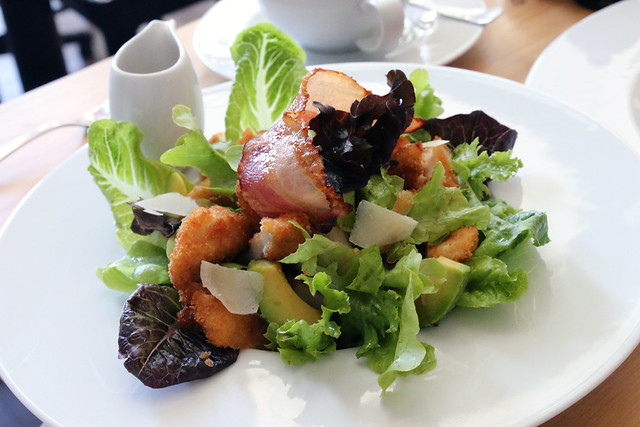 Lastly, the fruit salads in South Africa were absolutely killer. I’m quite the Bitch about my fruit plates and I have to say I enjoyed them across the country. The fruit plate at Borage was a large bowl filled with diced mangos, nectarines, oranges, cantaloupe, green apples, and strawberries. Alongside the bowl was a little trivet of yogurt and a bar of of house-made granola. I also loved the granola, which is served everywhere, in South Africa. It’s heavy on the nuts, dried berries, and cocoa, and low on the oats, unlike American granolas which seem to me to be all oats these days, which is cheaper.

This bar of granola was sticky, crunchy and crumbly—filled with nuts and berries and tasting strongly of chocolate. I ate it on the plane with the rest of the fruit and I was so happy I made time for a doggy bag. 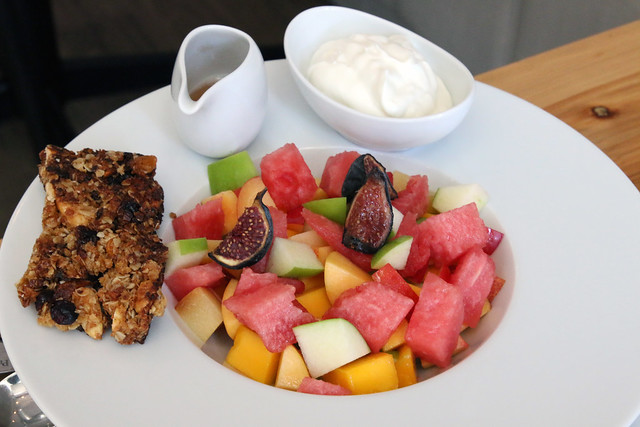 The Bitches say: A. Borage is one of Cape Town’s many brunch gems, which is no surprise as it comes from the former chef of Test Kitchen. The charming downtown spot is a great place for brunch any day of the week and worth a visit if you’re in Cape Town.