My boyfriend and I headed to Navy Yard for brunch at our favorite brewery, Bluejacket. We kicked off the day with the brewery tour and couldn’t wait for our brunch. In full disclosure, brunch was on the house today.

Bluejacket is a functioning brewery, bar, and restaurant. Since the Nats aren’t in season, there weren’t too many rowdy sports fans crowding the bar and the restaurant was relatively quiet and calm. On the flip side, this is great spot to head to the bar for any major sporting event and sip on the craft beer–it’s a great time, we promise. 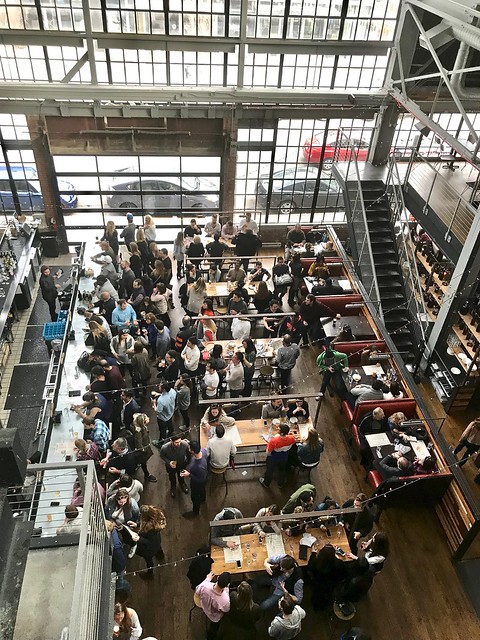 Instead of flippant fans, this Sunday morning the restaurant was swarming with babies. I don’t mean one or two–by the end of our meal there were seven babies at the surrounding tables. Not one cried or fussed though–it was shocking. The wonderful manager, Alex, said that the recent crop of babies is new for them. This can only mean one thing–it’s officially springtime and the babies and puppies are here to stay.

We started off with drinks and cinnamon buns. I selfishly ordered Andres an Island in the Sun because I couldn’t decide between it and the Winter Berry Sangria. The joke was on me though when he loved it and drank most of it before I could steal it back. His cocktail was made with pineapple infused rum, coconut cream, and lime. It was simple and #basic, but incredibly delicious and refreshing. We loved how the coconut cream made it frothy.

My Winter Berry Sangria was also a hit. It was made with Burgundy, vodka, strawberry, blackberry, cranberry, pomegranate, lemon juices, and a variety of fruits. It wasn’t too sweet or syrupy. It’s refreshing to know that a brewery can nail a sangria as well. 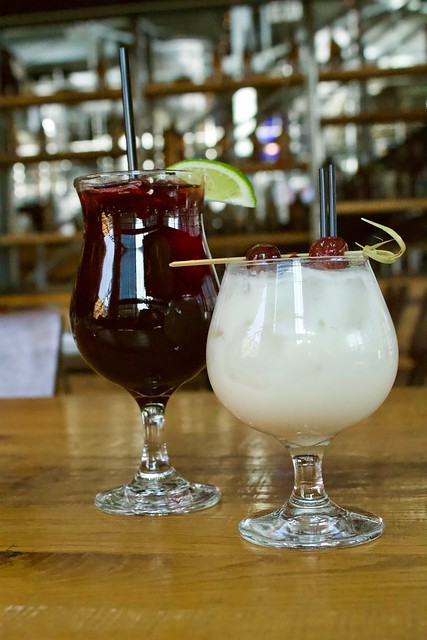 The cinnamon buns came out piping hot and slathered in frosting. While the frosting was sugary and thick, the actual buns were crispy on the outside. We wished they were softer. There was definitely enough cinnamon and frosting to balance out the crispiness of these buns. 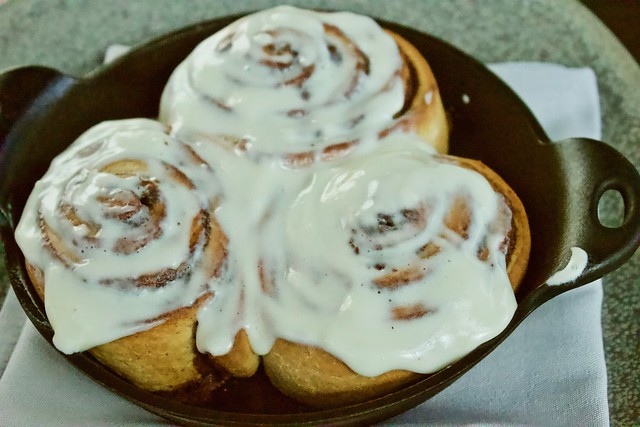 We moved onto our entrees and were treated with a few snifters of beer. Our waiter Michael surprised us with some personal selections. He was not only a fantastic waiter, but also picked some delicious beer. We absolutely loved their sour beer. It was my favorite beer I’ve ever tasted. 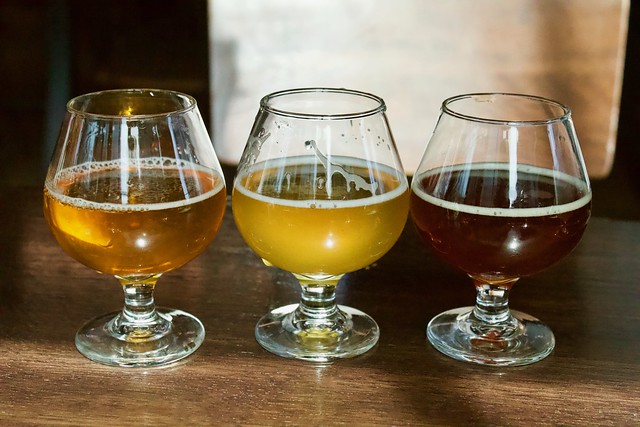 Andres ordered the pulled pork hash. This dish was made with caramelized onions, pickled peppers, eggs over easy, and sour cream. The pulled pork and veggies were all mixed together and topped off with the eggs and sour cream. The meat hash was flavorful and well cooked. It was bursting with flavor from the pickled peppers. The eggs were cooked perfectly and oozed yolk all over the pulled pork. My lovely date devoured this dish and I almost missed stealing a bite before his plate with completely clean. 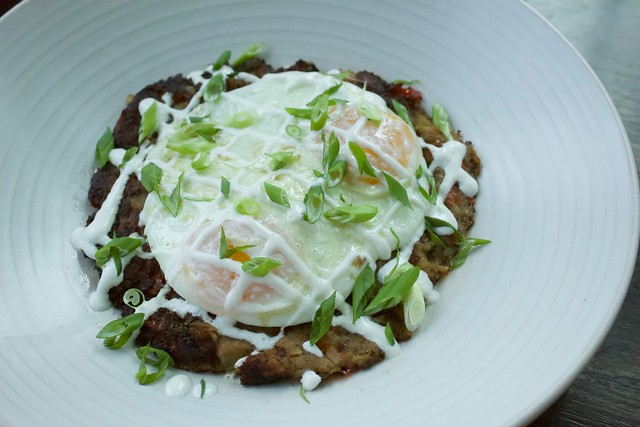 I couldn’t decide what I wanted and was feeling indecisive. I had been eyeing our neighbor’s rare roast beef sammie and Michael confirmed it was a great dish. It was made with horseradish mayo, beer cheese, and fried shallots on a poppy seed bun. I loved the roast beef. You could tell that it was a high quality beef and served rare and salty. The fried shallots and horseradish mayo complemented one another very well and were the perfect additions to the roast beef. I didn’t love the beer cheese which was slathered all over. I don’t think I’ve ever had beer cheese–so, this was a risky move on my part. However, my date loved the beer cheese. It’s definitely a hit or miss ingredient. Just be mentally prepared to love beer cheese before you order this dish. 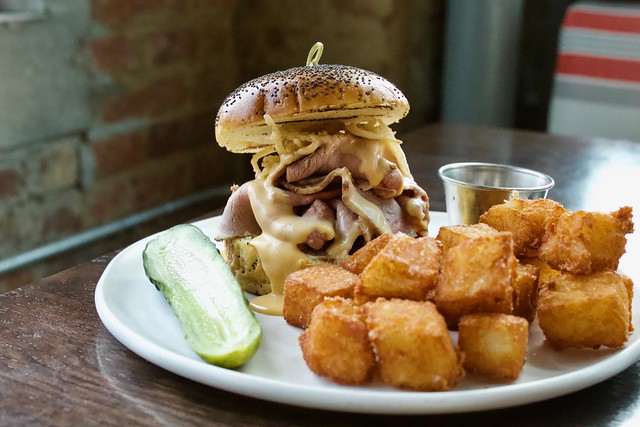 The pickle spear on the side of my sandwich was so good that I asked Michael if it was made in-house or not. He explained that they pickle everything in-house and offered to bring out the pickle board they serve on the dinner menu. I was in true pickled heaven. They serve six different varieties of pickled items. They offer three mainstay pickles and three funky, seasonal pickled items. This time of year they’re offering pickled blackberries, green beans, and tomatillos.

These pickles were all out of this world. Each one was better than the last. We especially loved the bread and butter, green beans, and original varieties. If you like pickles, this is an absolute must order. We’re so happy that Michael told us about it and served it to us at brunch. 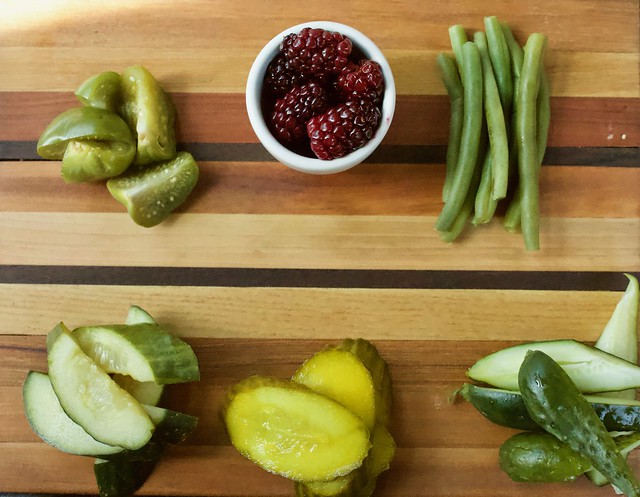 We ended our meal with pretzel French toast. This dish is served with strawberry coulis, cola-candied pecans, and whipped cream. We weren’t sure what to expect with this French toast dish, but we were pleasantly surprised. It was thick, dense, and very savory. There wasn’t an overwhelming pretzel taste, which we think was a good thing. It was just salty and savory enough. 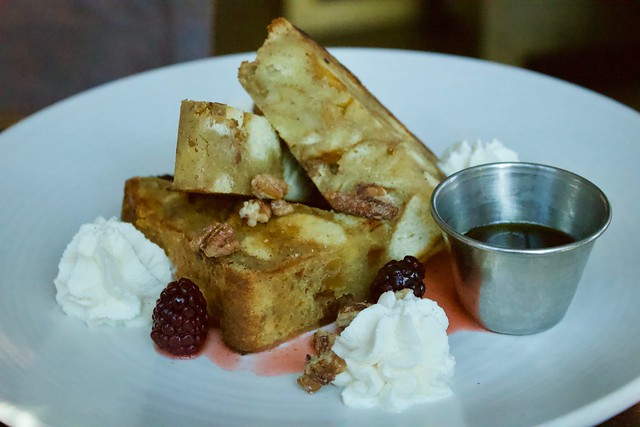 On our way out, the manager Alex sent us home with their brand new canned beers. They are hand-sealing each can individually upstairs in the brewery. It’s certainly a unique and thoughtful hostess gift or party favor. We can’t wait to crack open our four pack and enjoy the springtime. We will surely be back to stock up on more cans and brunch. 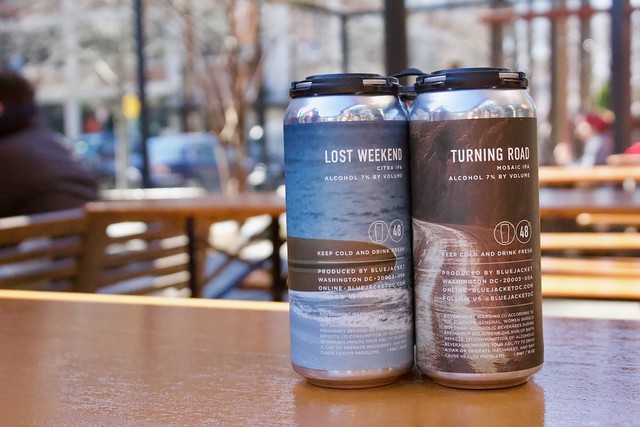 The Bitches say: A-. The food was of the highest quality and the service was flawless. We loved the elevated bar food and pickles galore.

Bluejacket serves brunch on Sunday from 11 a.m. until 3p.m.