It was a dreary day in the Meatpacking District as we made our way along the cobblestone streets, running late for our brunch reservations (as usual). We finally arrived at Bill’s Bar & Burger, where we had recently been invited in to try their newly launched Hangover Brunch, and sat ourselves at one of the may high tops, decked out in old school checkered tablecloths underneath the galaxy-spray-painted ceiling. 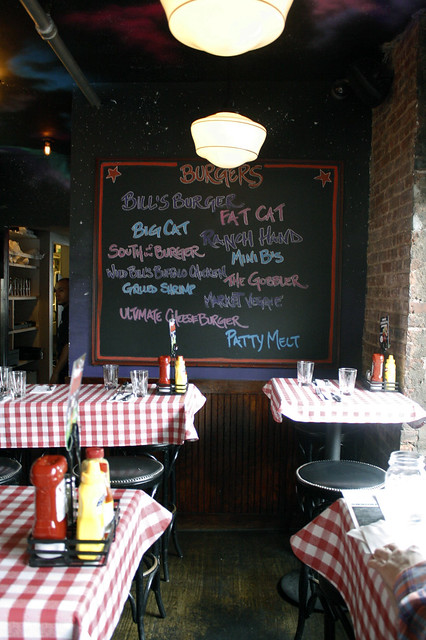 The Hangover Brunch menu offered a fair amount of your traditional breakfast items, from omelets to pancakes, and of course a Benedict Burger. If you were craving more savory dishes, ordering from the lunch menu was an option as well. 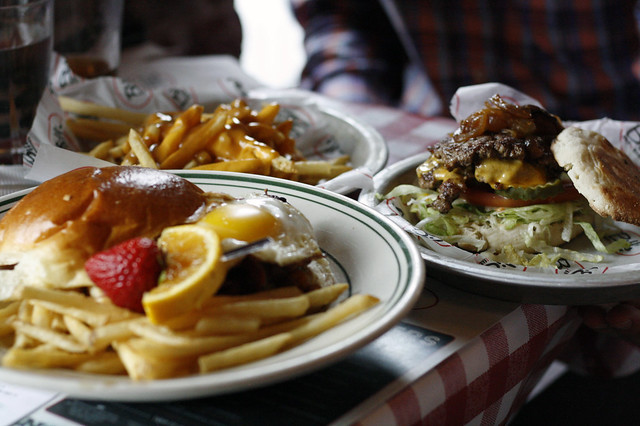 The beau kicked things off with a special craft beer, dubbed the Bill’s Brew ESB. It’s brewed just for Bill’s by Sixpoint Brewing, a local brewery in Brooklyn.  Naturally, I was drawn to the Build-Your-Own Bloody Mary bar, which featured everything from bacon to shrimp to pearl onions and pickles. I personally was too apprehensive to try the shrimp, but you can bet I filled my Bloody to the brim with most of the other accoutrements. 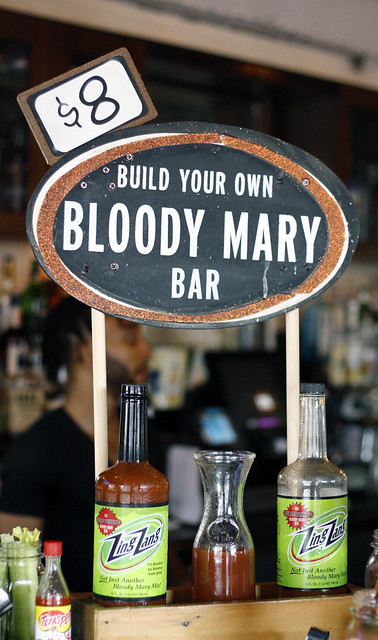 I’m always appreciative of Build-Your-Own cocktails, particularly for Bloodies, as you can control your spice level and make them as hot or as mild as you’d like. This one wasn’t super out of the ordinary, but was set up nicely and offered a fair amount of options for just $8–a solid bang for your buck. 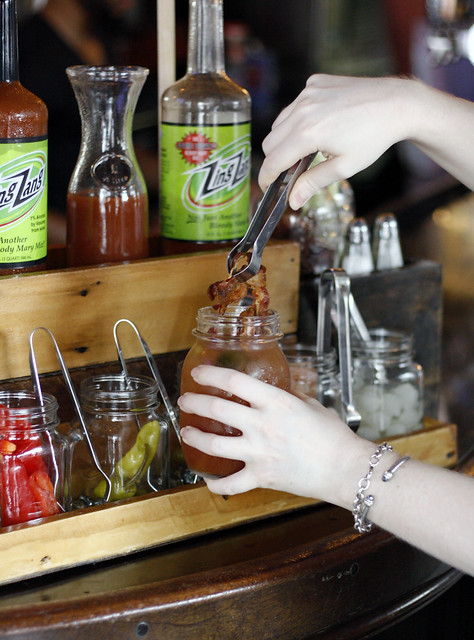 As is customary when we go to brunch, we opted to share a few things off the menu. First up: breakfast tacos. Scrambled eggs, bacon, salsa, and pico were tucked inside a soft tortilla, dusted with some kind of cheese that we think was cojita, but it wasn’t specified on the menu. 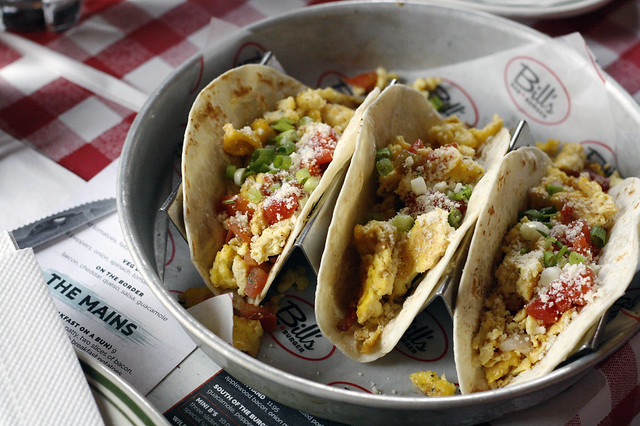 The tacos could have used a few more red onions, as they lacked crunch. While overall, the flavors were good together, it tasted like something was missing. Perhaps a chipotle aioli or a specialty hot sauce to spice things up a bit. But we were impressed with the amount of filling in each taco–sometimes restaurants can skimp. 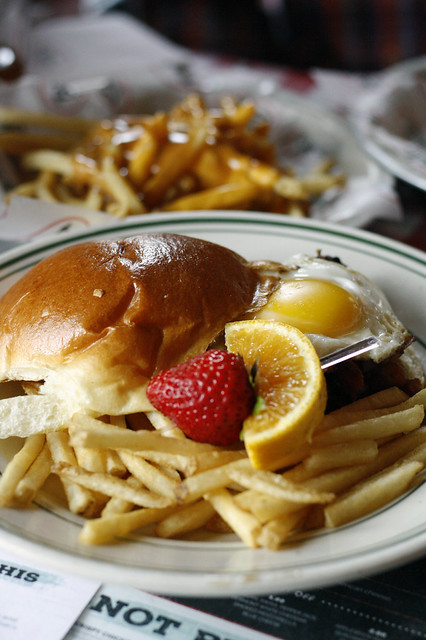 Next up was the BOB (Breakfast on a Bun), Bill’s version of a breakfast sandwich. A sunny-side-up egg, sausage patty, two slices of bacon, and sliced cheddar cheese were served on a potato bun, along with a side of breakfast potatoes.

Usually, sunny-side-up eggs are served either overcooked or too runny. But this was one of the most well-cooked eggs we’d encountered in a while. However, the sausage and bacon were a little too salty for my taste, and I could only muster a few bites of this sandwich. We were also both stumped by the skewer of orange and strawberry slice that accompanied our fries–they didn’t serve a purpose. 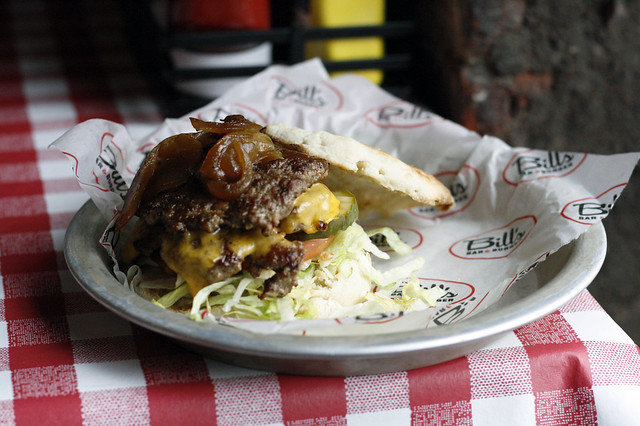 We had originally wanted to try the Benedict Burger but had consumed a fair amount of eggs at this point, so we opted to order a specialty burger off the lunch menu instead. The Fat Cat Burger, dubbed winner of a CNN Top 10 Burger Award, was topped with American cheese, special sauce, caramelized onion—all served on an English muffin. 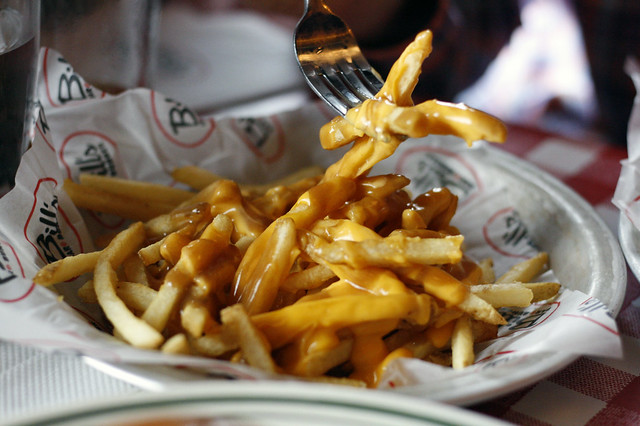 This burger was decent. Not amazing, but definitely not bad. The caramelized onions were a nice touch, but the special sauce got lost underneath and didn’t stand out at all. The real star of this dish was the disco fries–basically cheese fries. Just something about crispy fries doused in melted cheese cures your hangover, and everything just feels just about right in the world.

The Bitches say: Three Flutes. Bill’s has decent burgers and your average brunch selections, but their brunch game was just that–average. Aside from the well-cooked egg, we weren’t blown away by anything we tried.

Bill’s Bar & Burger serves their Hangover Brunch on Saturdays and Sundays from 10 a.m. until 2 p.m.