Ok, I’ll admit it. While I love a fancypants brunch just like the next Bitch, or dining at the latest number one spot on Eater’s Heat Map, sometimes I just need a casual brunch–preferably with a bottomless bevvie option.  So when my boyfriend suggested a group brunch at BarKogi, a fast-casual Korean fusion restaurant in Midtown East, I jumped at the opportunity. 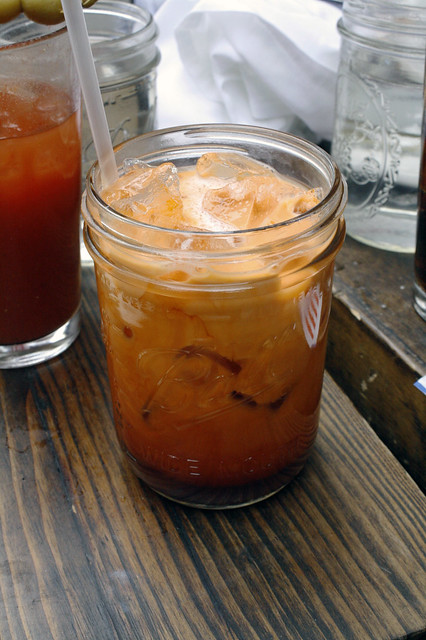 We don’t venture to 2nd Ave. often, so it was nice to take in the neighborhood on our stroll over. A lot of pubs and local restaurants line the street, and it’s a bit more quiet and family-oriented, as the East side tends to be.

The interior of BarKogi is dimly-lit and appears very small and narrow at first. But the closer you get to the back, the more the space opens up and the more it feels like a sports bar, with basketball games being projected onto one of the walls.

We weren’t really feeling the bar-like atmosphere this early on a Sunday, so we opted for a table outside. Luckily, this was one of the warmer days we’ve had so far this spring. We knew some of us wanted to participate in the bottomless brunch option. It was what we came to BarKogi for, after all. $23 gets you one brunch entree and your choice of unlimited brunch cocktails. Can’t beat that deal!

One thing to note is that you can’t switch up your cocktails during your meal–you have to stick with your choice the entire time. I ordered the Sriracha Bloody Mary, while Ed and Simina both went with Lychee Mimosas. The beau sat this one out, as he was still feeling a bit hungover from the night before. 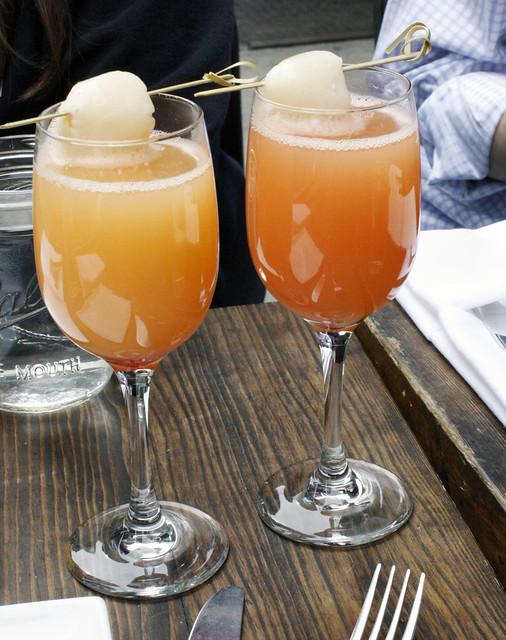 While the mimosas were tasty, they were a bit inconsistent with their ingredients. Some came with more lychee syrup which led to them being much sweeter, while others were heavier on the bubbly. The bartender had a heavy hand with the Sriracha portion of my Bloody Mary, and I couldn’t drink more than two. Next time, I’d go with a different cocktail, like the spiked V8 or the soju orange kamikaze. 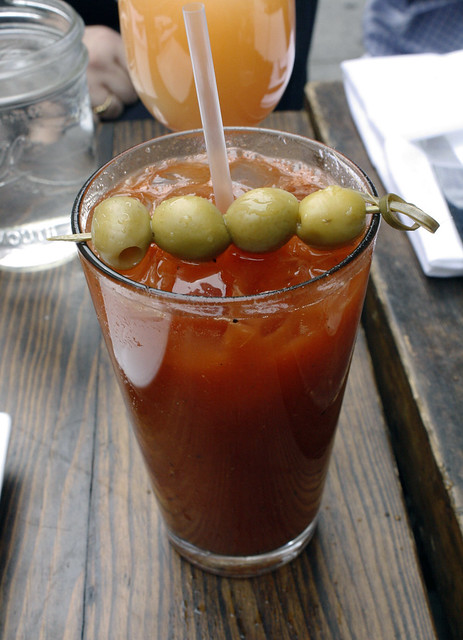 When we went to place our orders, our server informed us that they were out of waffles, so we wouldn’t be able to try Belgian waffle Eggs Benedict with bacon and spam, or the Korean fried chicken and Belgian waffles.

These were both options we had been eyeing, so this threw a bit of a kink into our plan. While we understood that things like this happen and restaurants can run out of ingredients, we wish they had offered us a substitute for the waffles, like a pancake or a biscuit.

After we reexamined the menu, we were finally ready to order our food. Ed and Simina both got the stuffed pancakes with bacon, hash, and poached eggs. 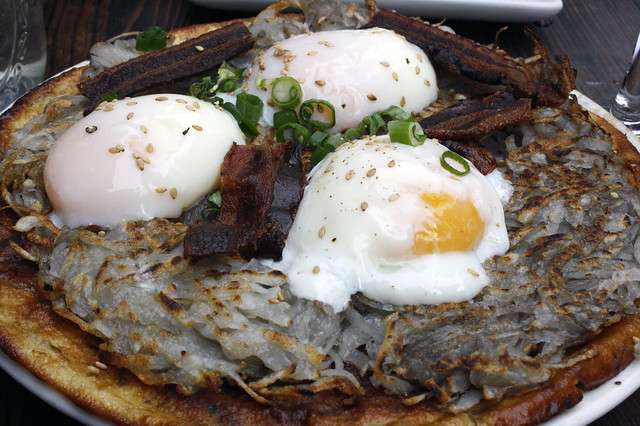 In our minds, we envisioned an extra thick, sweet pancake, stuffed in the middle with the other fixings. However, being that BarKogi is a Korean fusion restaurant, this was actually a thin and savory Asian pancake, topped with a layer of hashbrowns, strips of bacon, and perfectly poached eggs.

While it may not have been exactly what they were expecting, our friends had zero complaints about their entrees and kept commenting on how tasty they were, and how different this dish was from anything they’d had at brunch before. 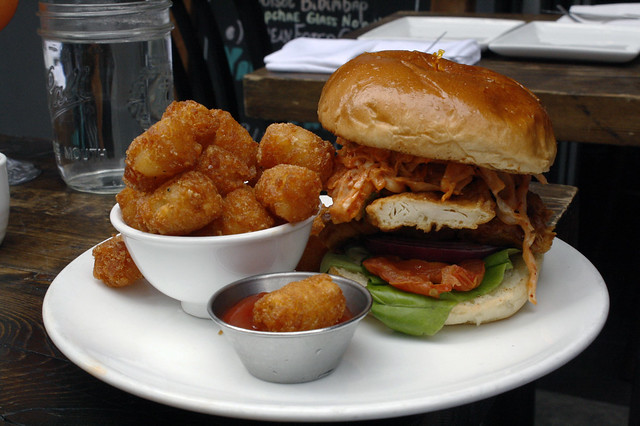 Fields ordered the fried chicken burger. It was basically a fried chicken sandwich, served on a toasted bun and topped with pickles, tomatoes, lettuce, and a kimchi slaw. It was delicious, and the chicken was perfectly fried. The kimchi slaw added a kick and provided a nice crunch that contrasted nicely with the rest of the sandwich. 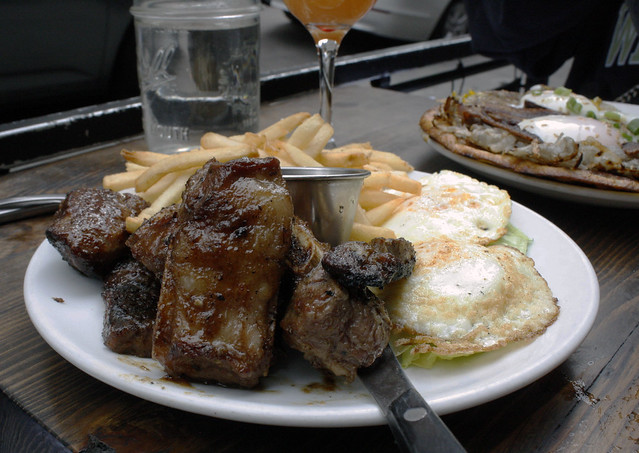 I went with the kalbi steak and eggs with shoestring fries. The eggs were served fried and were a tad overdone, but the flavor of the steak was amazing. It was so tender and juicy. However, this was more like shortribs than steak, as each piece of meat was served still attached to small, thick bones. So there wasn’t that much actual meat to be had. 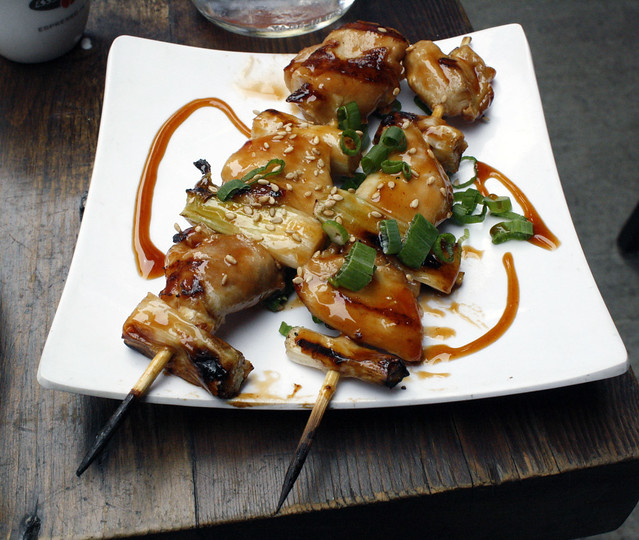 We also tried to split the tempura honey bacon, but were told they were out of that dish as well. So, we split two Yakitori BBQ skewers instead. Yakitori literally translates into “grilled chicken,” and it’s a popular Japanese street food where bite-size pieces of veggies and meat are skewered and grilled over charcoal. We kept it simple and ordered the chicken thigh and scallion Yakitori, as well as the shishito peppers with lime salt. 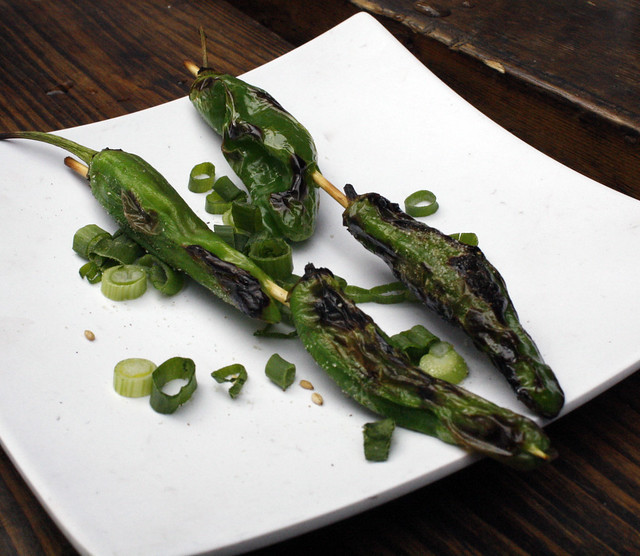 While the sweetness of the sauce drizzled on the chicken thigh nicely complimented the savory aspect of the meat, this particular Yakitori wasn’t very memorable. I much preferred the shishito peppers, which had a crispy char and a hint of citrus from the lime salt.

I can never say no to a Thai iced tea when it’s on the menu, so we opted to close our meal out with a round of those instead of trying dessert. It was sweet, milky, and creamy, and had me wishing I was sunning myself on a remote Thai beach rather than a cluttered New York City sidewalk.

The Bitches say: C+. While the bottomless brunch deal at BarKogi is a steal price-wise, the food and cocktails are just above average. We left disappointed that they were out of a third of their brunch menu, and that we weren’t offered any alternatives or substitutes.

BarKogi serves brunch on Saturdays and Sundays from 11 a.m. until 4 p.m.