Disclaimer: I write this review with a very heavy heart.

I love my neighborhood, and am always excited when I find restaurants that I love within walking distance of my apartment. When I first moved to Chicago in February 2015, I found a favorite go-to restaurant: Barcocina. 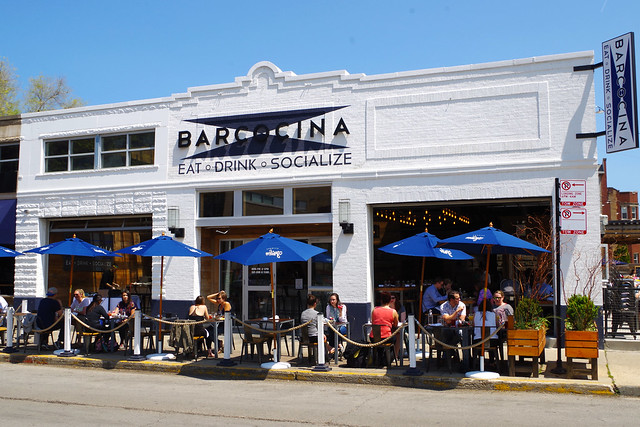 Barcocina is an open-air, bright, and beautiful restaurant in Lakeview that is known for its tacos, large patios, and smoky margaritas. I had been to Barcocina many, many times — literally, I have a card that says “Barcocina Neighborhood V.I.P.” — and have only ever had fantastic food, and great service at Barcocina.

So, when I heard that Barcocina was offering brunch, I had to go! 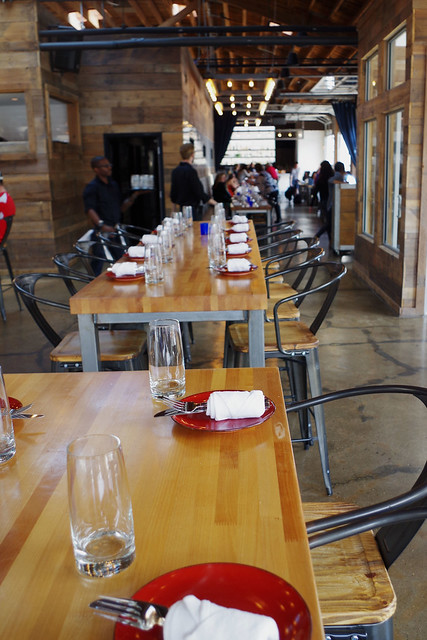 It was a perfect, sunny day in May, and Cameron, Ashley, and I chose seats outside on the crowded patio for brunch at Barcocina. After all, it was finally starting to feel like summer, and who doesn’t love a patio brunch?

As we sat down, I saw that there were papers on the table that explained the brunch menu and options at Barcocina. It said “$44.95 per person — includes bottomless beverages, an entree, and chef brunch stations” — OK, tell me more. There was also an option for “$29.95 without drinks”—since the chef stations are included in both deals, they should be worthwhile, right?

Our server came and greeted us and we asked some questions about the brunch options. I specifically inquired as to the prices of each of the entrees listed on the flyer—there were no prices listed so it made it hard to discern if the $45 was worth it or not. Also, conveniently, there were no prices on the beverages either, making it impossible to decide if you would actually spend $45 on brunch or not, even if you got everything you wanted.

Ultimately, I didn’t feel as if I could adequately review Barcocina and see everything it had to offer if I didn’t go for the $45 option. So, reluctantly I opted for all-inclusive option, and put in my first drink order.

I went to go check out these “chef stations”—if they were part of the deal, then one would assume they were good.

I walked right by the first chef station, without even knowing it. The “station” was an unmanned table with a bowl of chips, a nearly empty bowl of guacamole, a couple different types of salsas, a fruit plate in desperate need of refilling, and mini boxes of Kellogg’s cereal—think Lucky Charms, Fruit Loops, etc. This can’t be what’s included for $45? Oh, but it was.

The second station was a bit more of what I was expecting: a chef with a pan and a hot plate making omelettes, and hot containers with bacon, breakfast potatoes, and sausage. I did not see any cured meats, seasonal salads, or hand-carved meats at either station, which were listed as part of these so-called “stations.”

This brunch was not off to a good start. 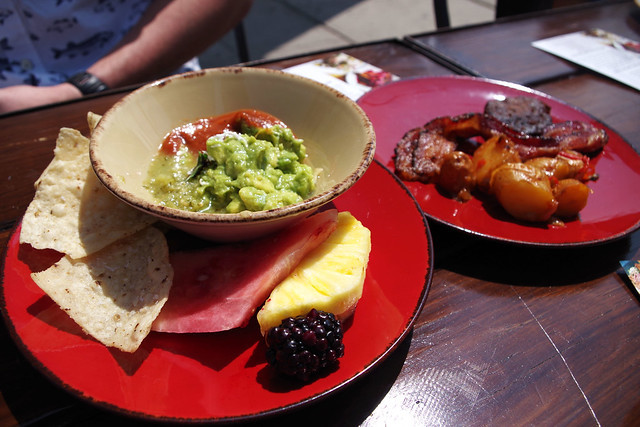 Ashley, Cameron, and I arrived back at our table with the spoils we selected from the first chef station, and Cameron went onto get bacon and sausage from the second table. 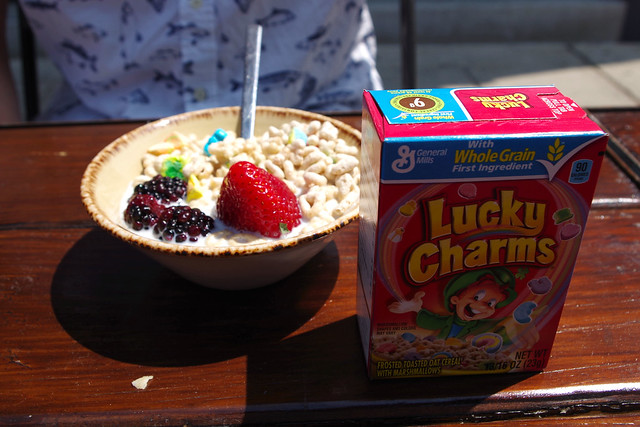 I ate some fruit and some chips and guacamole. The fruit was subpar in freshness, and the chips and guacamole seemed as if they had been sitting out for awhile. Cameron enjoyed the Lucky Charm’s cereal, but agreed that it was peculiar that Barcocina decided to make that an option.

As we were eating, our drinks finally arrived at the table: I chose a prickly pear mimosa, and Ashley chose the white sangria. 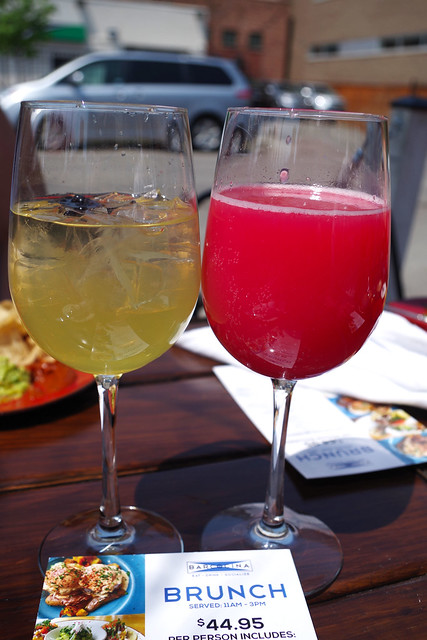 My cocktail was OK, but the most impressive part was the color—a pretty fuchsia pink. I certainly wouldn’t order it again, as it was far more juice than bubbles. Ashley liked her white sangria, stating it was fruity, light, and enjoyed the berries submerged in the mix. 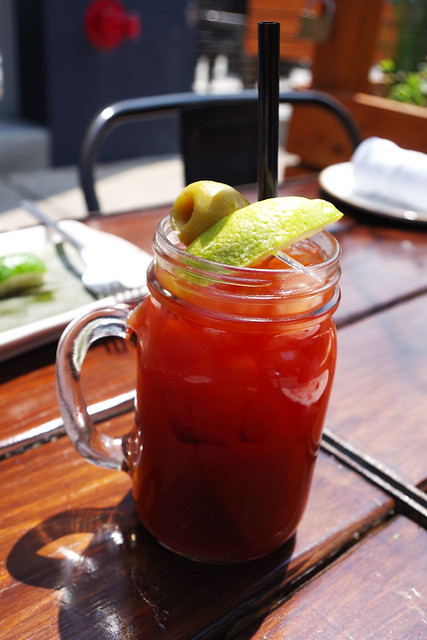 Because it was bottomless, and I wasn’t too happy with my first cocktail, I ordered a Bloody Mary. The Bloody was not the strongest, but it was at the very least a cocktail with some kick. It did have a bit of spice to it, but fell short on presentation, and I’ve had my fair share of Bloody Marys.

Next up were the entrees, and I was hoping for them to be the saving grace for this brunch. 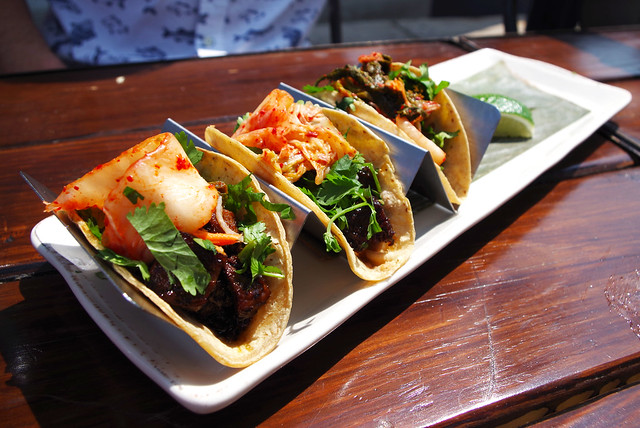 Cameron chose the Korean short ribs tacos for his entree. The dish included short ribs, kimchi, sambal sauce, and onions. The portion of the entree was small, and they were overly sauced making them more sweet than savory. The other qualm Cam had with the dish was that the size of the tortilla wasn’t big enough to hold all of the contents. He was not too pleased with his entree; thankfully he paid the least of the three of us. 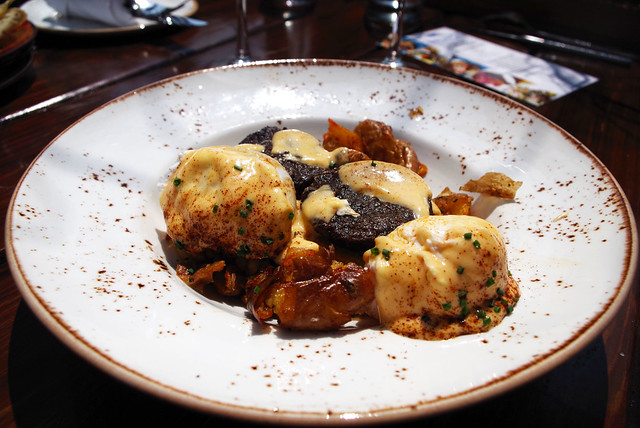 Ashley went for the eggs Benedict with chorizo and chipotle Hollandaise sauce. Ashley liked her entree saying it was filling, and flavorful. Note: She was the only one who liked her entree. 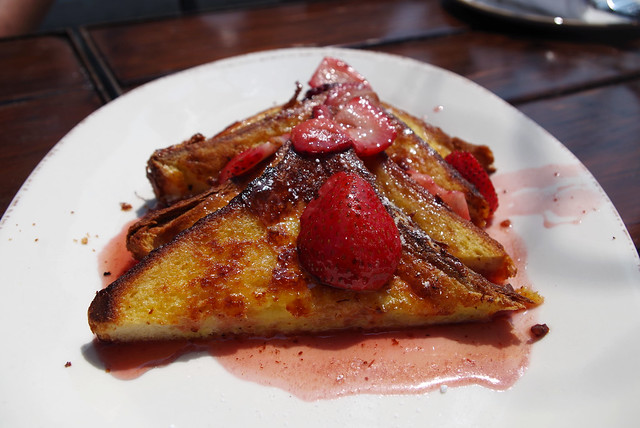 I went for something sweet, and got the Brioche French toast. To be honest, it reminded me of the kind of French toast you have as a kid—the frozen kind that your mom or dad would heat up in a pan or in a toaster oven. According to the menu, there was some rum caramel and some seasonal fruit; sadly, it did not taste that way at all. And, this was not Brioche bread, no matter how you slice it.

At the end of it all, I was beside myself and decided to order some coffee to help put some pep back in my step. Ashley also opted for a cup of coffee so we placed our order with our waiter and he informed us that they were making a fresh, piping hot pot for us. 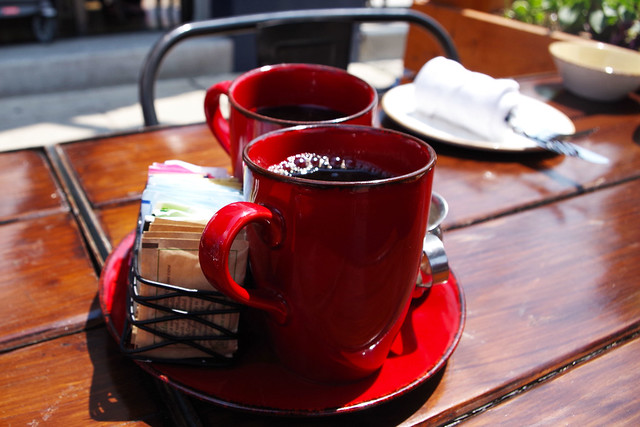 About 20 minutes went by, and as our waiter was buzzing by, I inquired as to whether or not our coffee was finished brewing. He immediately went and fetched us two cups with cream and sugar.

I picked one of the two coffees, added my usual cream, and sugar, and took a sip—it was cold. Not “you just put cream in it so it cooled down a bit” cold—it was cold coffee, when it should have been hot. I asked Ashley if her’s was cold too, as she also added cream, and hers was piping hot. I was more then baffled, I was miffed—how is this possible?

I immediately flagged down our server, and he took my cup stating “that’s so weird, because both coffees came from the same pot”—forgive me sir, but that just can’t be.

My second cup of coffee came back hot, as it should have been the first time, and we asked for our checks—I was done.

This was by far, the most I have spent on brunch, even when I have had multiple beverages without a bottomless option. I was beyond underwhelmed and disappointed by the brunch at Barcocina. I wanted to love this brunch, and expected to only be able to rave about it. But, this brunch does not offer anything worth its hefty price tag.

Barcocina was one of my favorite places to go to in Lakeview—the ambiance and open air design is amazing, the smoky margaritas are to die for, but this brunch was overpriced and underwhelming, to say the least.

The Bitches say: F. Barcocina’s brunch was underwhelming, and we wouldn’t recommend it to any of our beloved brunch-goers. The “stations” should be removed from the brunch, and instead offer guests an appetizer from the kitchen as part of the deal, or offer some more luxurious, and worthwhile options at the stations—I didn’t even photograph them because they were so unappealing. The only good news is that this brunch at Barcocina can only get better.