Sometimes brunch can be a difficult conversation to have on a Saturday or Sunday morning. But, the conversation always seems to go better when the suggested brunch spot is a short walk away.

One very slow Saturday morning, Cam and I decided to walk up his street and go to a local spot on Division Street in Wicker Park. 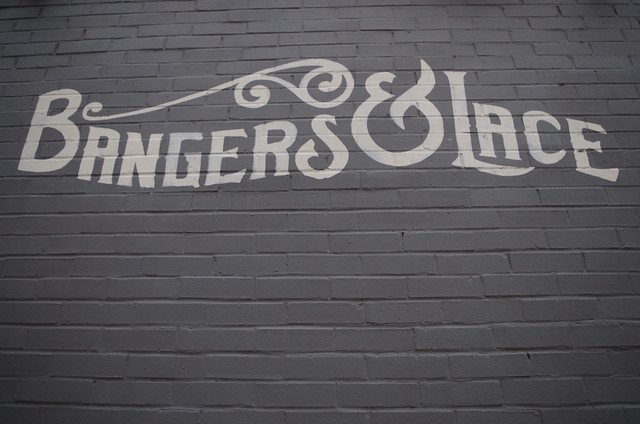 Bangers & Lace is a spot Cameron and I have frequented on late nights, but seeing the spot during the day certainly brought a new perspective. The restaurant is narrow and deep, with large windows at the front that affords the space a lot of light, but it gets quite dim as you move further back.

After surveying the brunch menu, I thought Cam and I should give it a try! And, since it has just started to get chilly, neither of us wanted to have to go far for brunch.

To ensure I had enough light for photos, Cam and I decided to sit at the bar, which is near the floor to ceiling windows at the front of the restaurant. While sitting at the bar was better for photos, it proved to be worse for service. Cam and I sat at the bar for a solid fifteen minutes before the bartender made his way over to us to even ask if we wanted water—that’s pretty dismal service if you ask me! Unfortunately, the service proved to be slow throughout the meal.

The menu at Bangers & Lace is a simple one, but being that it’s first and foremost a bar, there were several different versions of Bloody Marys on the menu. Cam and I decided to try two signature ones: the meat and potatoes Bloody Mary and the Hawaiian Bloody Mary. 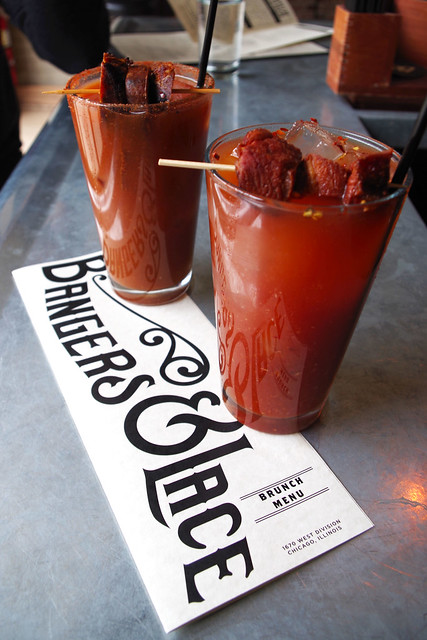 The meat and potatoes Bloody was a combination of vodka, house Bloody mix, veal demi, and garnished with Andouille sausage. The sausage on the skewer was delicious but it’s always a bad sign when the garnishes outdo the beverage. My Hawaiian Bloody Mary was vodka, house bloody mix, pineapple, rauchbier, crushed red pepper, and garnished with bacon. I unfortunately didn’t enjoy this beverage at all, and could barely stomach half of it. The combination of the salty Bloody mix and pineapple left my stomach feeling sour—not a great start to a brunch to say the least!

Next up were choices for entrees, and several dishes sounded interesting on the menu. 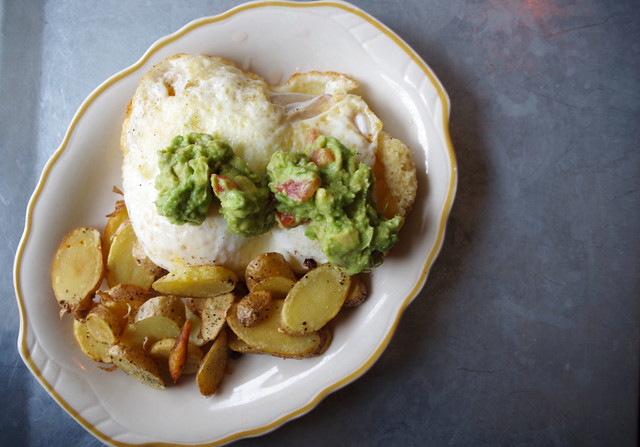 I decided to try the Biscuit #2 for my entree. It was a biscuit with avocado-tomato relish, smoked gouda, an omelet egg, and roasted fingerling potatoes on the side. The crispy potatoes stole the show, and were the best part to the dish. All in all, it was a glorified biscuit with guacamole, and while the biscuit was fluffy, it was a lazy execution and was not satisfying. 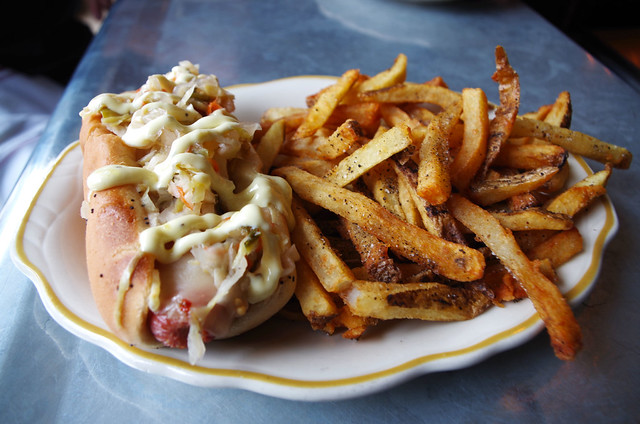 To share, Cam and I decided to try the slaw hot dog with homemade Carolina slaw, Pepper Jack cheese, and aioli atop a Vienna beef hot dog and fries on the side. The slaw was a nice and definitely added a vinegar component that worked well with the salty Vienna beef hot dog. It was a creative way to present the hot dog, and was quite satisfying. 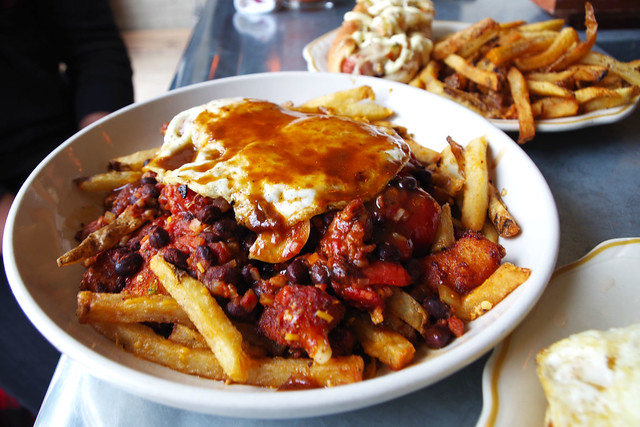 Cam decided to try the A.M. poutine, which turned out to the best the best entree we tried. The poutine was a plate full of fries topped with cheese curds, crumbled Andouille sausage, black beans, tomatoes, brown gravy, and two fried eggs. It was an ooey, gooey, flavorful dish that was a bit hard to eat, since every bite was teetering on a fork-full of fries. The sausage offered a bit of spice to the dish, but it was not overwhelming.

The poutine was by far the best entree, but it’s not to be forgotten, this was a glorified bar food brunch. Bangers & Lace attempted to compete in the brunch game, but perhaps should stick to the beer and beverages.

The Bitches say: D. The slow service, lazy entrees, and unsatisfying Bloody Marys are what land Bangers & Lace such a low grade for us.

Bangers & Lace serves brunch on Saturday and Sunday from 11 a.m. to 3 p.m.