Ah Babu Ji, how I love thee. Actually all of the New York Bitches love the flavorful Indian cuisine at this East Village hotspot; I believe Becca dines here weekly. Babu Ji just launched brunch this weekend so I beat everyone to the punch to try out their menu, which features signature dinner menu items with a breakfast twist.

For the past month, I’ve experimented with vegetarianism as an effort to undo all of my culinary sins after living in Southeast Asia for two and a half months. New York is a pretty easy place to avoid meat with trendy and delicious vegetarian and vegan joints opening every day (cue the much-needed By Chloe expansions). Indian cuisine has been a go-to when I’ve dined out lately since vegetables are typically treated like the stars of the show. 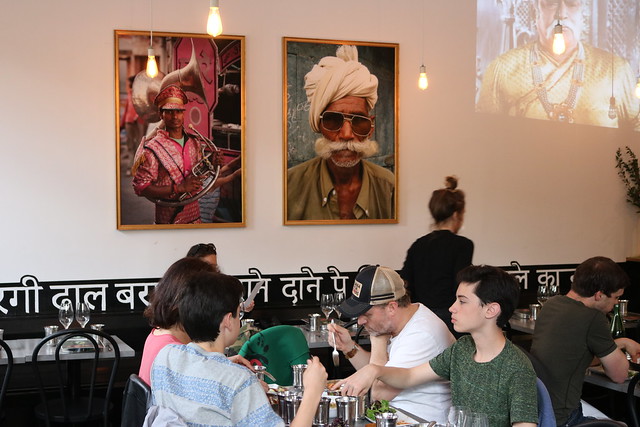 Chef Jessi Singh graciously invited us in the try the newly launched brunch and I was joined by my girlfriend Jaime, who lives nearby in Alphabet City. At 12:30 on a Sunday, the restaurant was about half-full, which is the most empty you’ll ever see Babu Ji, with it’s infamous two+ hour-long dinner wait times. We were surrounded by a few large Indian families with small children (that’s how you know it’s authentic) and a few hipster couples in the know. The restaurant was surprisingly full for just beginning brunch service the day prior. 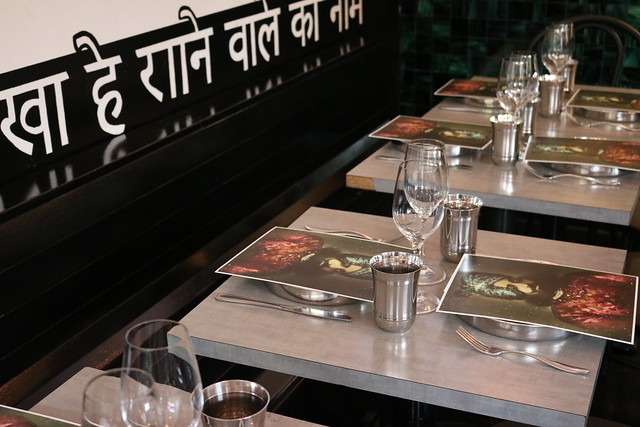 The ambiance at Babu Ji reminds me of a Wes Anderson flick. There’s quirky art pieces like oversized photographs and a stuffed peacock perched on top of the “serve yourself” beer fridge with 40+ types of craft brews, and classic Bollywood films are projected onto the walls. Even the backsides of the menus are artistic and align with the modern Indian theme. 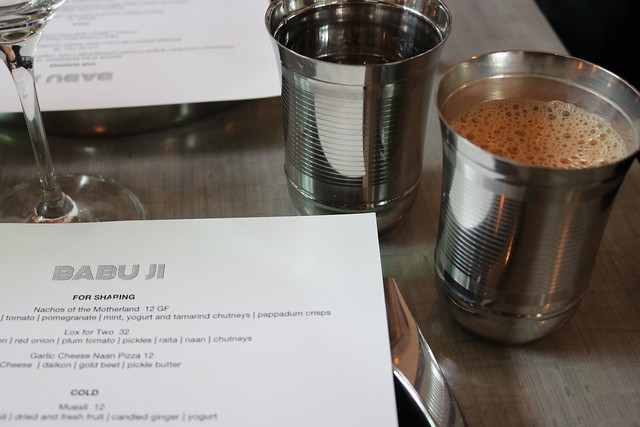 Jaime and I had a productive afternoon of work, yoga, and grocery shopping planned so we forwent on the booze. Jaime had a fresh lemonade and loved that they poured it in a wine glass–keeping it classy. I had a Punjabi ginger and fennel chai drink, which was served piping hot. Since it came in the signature Babu Ji metal cups, I had to wait awhile before the vessel was cool enough to drink from. After my drink had cooled enough to grab ahold of, I savored the zippy ginger flavor; it was a refreshing departure from my typical latte. 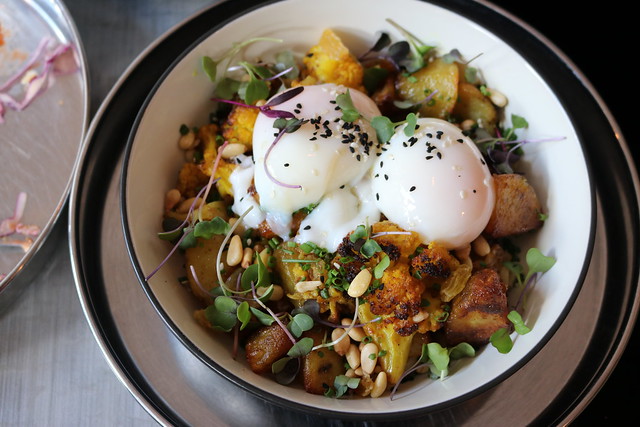 With menu offerings such as “Nachos from the Motherland” and a lox plate for two, Jaime and I had a tough time narrowing down our noshes. We ended up ordering our friendly server’s top recommendations, skewing heavily vegetarian for my current dietary preferences.

We started with the Aloo Gobi salad, from the “cold” part of the menu. I recognized the spiced cauliflower from the dinner menu, which is a fan favorite, this time for brunch paired with potatoes, toasted pine nuts, golden raisins, and poached eggs. It was light yet savory, and unexpected for a brunch menu. The pine nuts provided a satisfying crunch, while the golden raisins satiated my ever-present sweet tooth. I do recommend eating this quickly since it was less palatable once the eggs got cold. 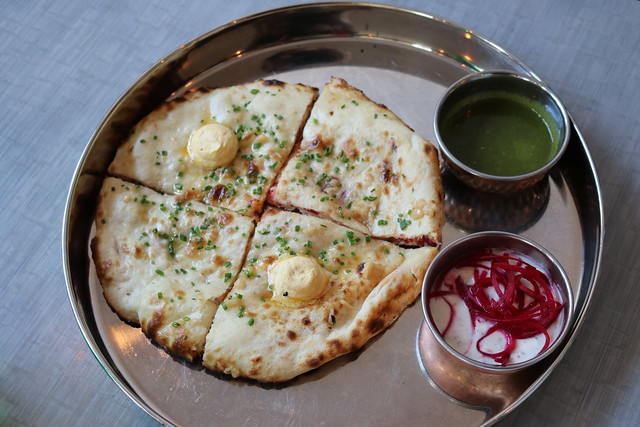 When you see an item like garlic cheese naan pizza, you know you have to order it. Pretty much everyone else at brunch had an order of this on their table too. It was every bit of the classic, melt in your mouth, carby goodness typical of traditional naan, but taken to the next level as it was stuffed with cheese and spices. This dish was perfect for sharing and equally perfect to sop over a hangover, I’d imagine. I particularly enjoyed the yogurt-based dipping sauce with sweet beet ribbons. 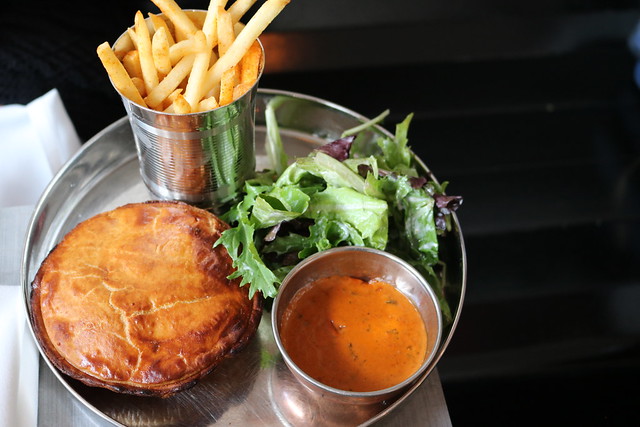 Jaime’s Indian restaurant mainstay is butter chicken so she knew the butter chicken pie was a must-order. She reported that the dish was savory and balanced; she particularly loved the light, flakey pie crust. This was one of the better butter chicken entrees she’s had and she wholeheartedly gave it two thumbs up. 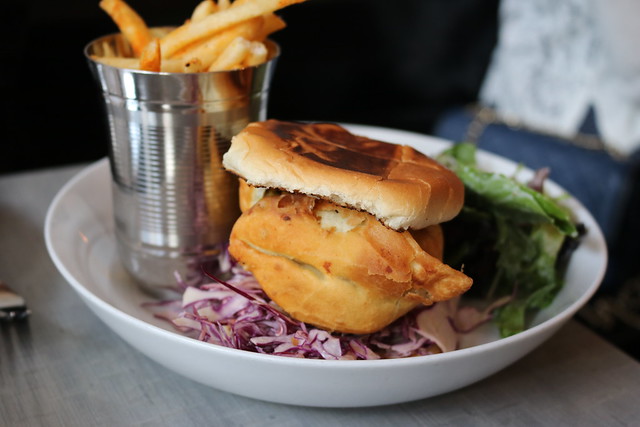 Two words: samosa burger. Drop the mic. I was delighted to find that this “burger” was vegetarian friendly. One large samosa stuffed with potatoes, veggies, and spices was nestled in between a buttery grilled bun, slaw, and aioli. This decadent dish was an outstanding replacement for the carnivorous version and gave any veggie burger a run for its money. We didn’t even touch the side salad since we had much more appetizing options, but munched on the masala fries throughout our meal. My one criticism was the fries weren’t served with any dipping sauce, but they were perfect once we paired them with the curry sauce that came with Jaime’s butter chicken pie. 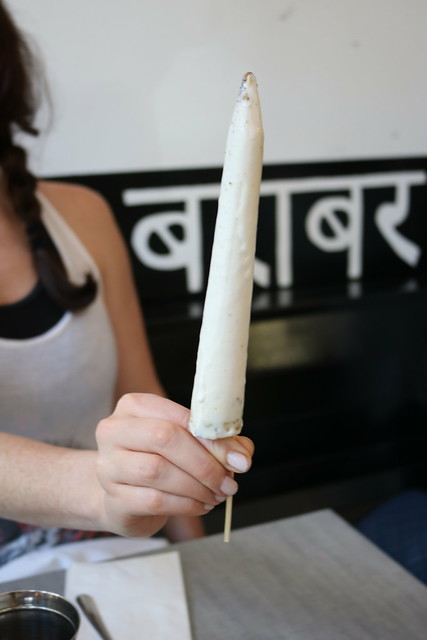 To end our brunch on a sweet note, we tried the housemade cardamom, pistachio, and honey ice cream. The ice cream is served in a skinny metal cone and you pop it out on a stick when you’re ready to dig in. I’m normally a chocolate-or-nothing gal, but I loved the warm, comforting flavors that blended perfectly together. There was something familiar about this combination and we polished off every last bite. One complaint is that it’s a bit messy to share, so all the more reason to order one a piece.

The Bitches say: A. We’re ecstatic that one of our favorite dinner spots now serves brunch. We weren’t disappointed by the creative, flavorful Indian fare and lively ambiance in the East Village.