Jan 2019: Update from the Bitches: Chef Gaurav Anand is no longer with aRoqa
Nothing goes together as well as brunch and your besties. It’s a pairing I’m quite fond of. A brunch combining Eastern and Western flavors, even better. I was beyond ecstatic to bring my best friend, Jeannie, and her husband, Rob, along with me on one of my brunch adventures as I rediscover the city. Jeannie is one of my favorite people, and our friendship goes back nearly two decades, some of those years even spent as roommates at Rutgers. I can always rely on her for sound advice and a side of gossip from our hometown.

Over the last few years, Jeannie and Rob have grown to appreciate Indian food. It only seemed fitting to try a new contemporary Indian brunch with their favorite Indian person. I had heard wonderful things about aRoqa along with  chef/owner Gaurav Anand’s other establishments, so the stakes were high. 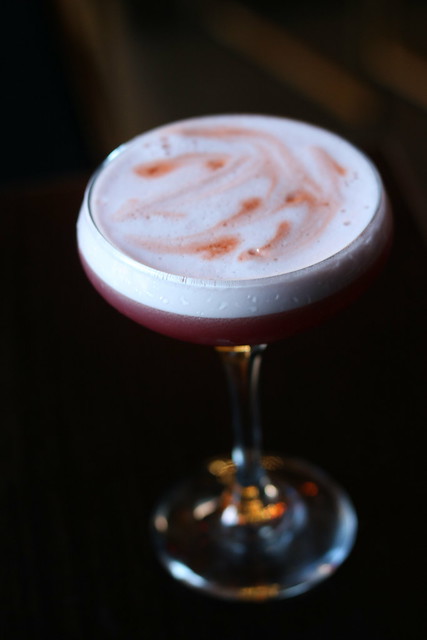 We began with a round of brunch cocktails. I opted for the Third Eye cocktail with strawberry hibiscus–infused gin, orange basil cordial, Cherry Heering, and lemon. The cocktail is served beautifully and tastes even more delightful. 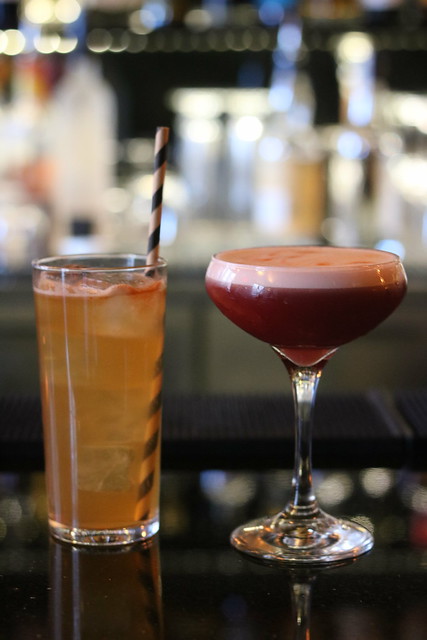 The sleek modern restaurant takes all-black everything to heart, with pops of gold to brighten up the space.  As someone that appreciates a good old-fashioned, Rob was drawn to the Season of Luck. The chamomile-infused bourbon cocktail combines bitters, Bénédictine, Doc’s Cider, and spiced syrup. Rob was in luck as the playful cocktail was just what he wanted. 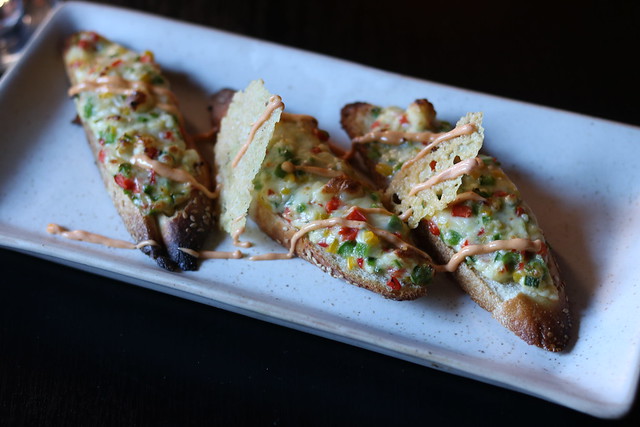 The menu had so many appealing options, we were at a loss on where to begin. Chef Anand greeted us and offered his suggestions. The habanero cheese toast was an absolute must for me. The trio of toasts was satisfying with a spicy kick. I recognized the Amul cheese at first bite from indulging in a plethora of chili cheese toast during family vacations in Mumbai. The toast includes an array of peppers with habanero chili and aioli. It was the perfect start to an excellent meal. 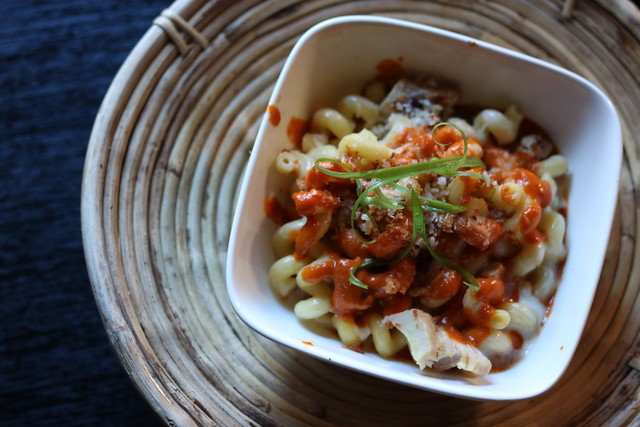 Jeannie and Rob shared the chili chicken dumplings. The two piece dumpling was steaming and packed a punch in terms of spiciness.  Next the butter chicken mac and cheese came out. The cavatappi looked incredible, especially for a cold winter day. I had to remind myself I was a vegetarian as not to dig in. Jeannie and Rob both raved about the creamy mac and cheese with habanero chicken. I was especially impressed with the execution of a contemporary take on a classic Indian dish. 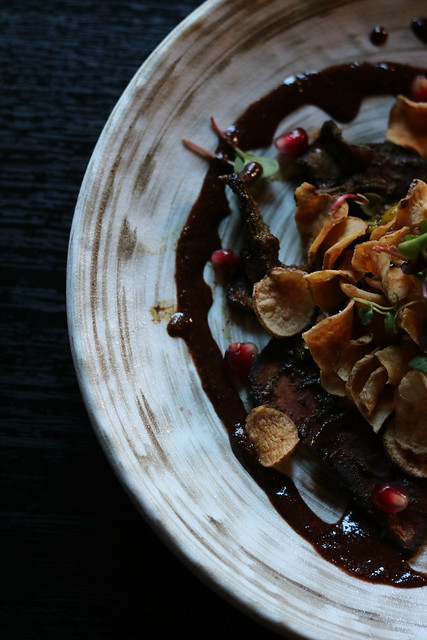 I’ve never been a fan of sweet vegetables or sunchokes, but I do have an affinity for chaats. The crispy sunchokes chaat looked stunning upon arrival. The pomegranate emulsion combined with koshimbir brought the flavors together and made me rethink sunchokes and sweet potato. 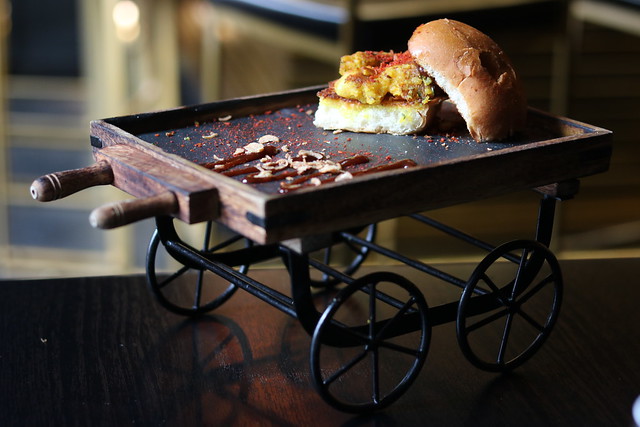 Pav baji and vada pav are some of my favorite things to eat. It reminds me of Sunday afternoons growing up. There’s nothing as comforting as these delicious Indian sliders. The vada pav makes quite an entrance. The slider is served atop a mini cart. It was almost too beautiful to eat—almost. The spiced potatoes were seasoned just right and the pav was perfect. Anand not only focuses on reinventing Indian dishes but really takes his creations to the next level by adding playful and dramatic elements to how they’re served. 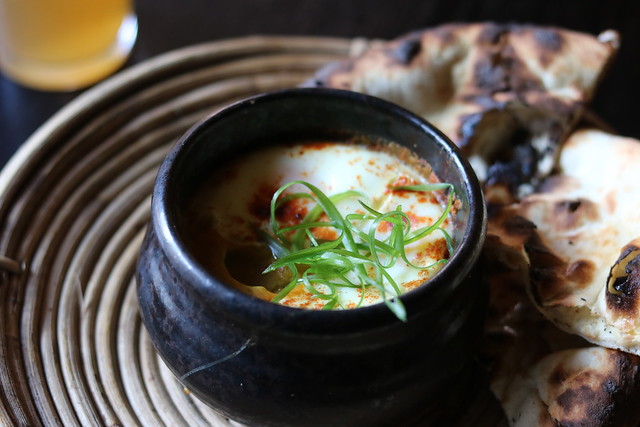 Jeannie was craving naan, and whatever an expecting lady desires, she should get. The naan went together well with the baked eggs and lentil stew. The portion is rather small but worth it. Pickled eggplant is the base with a green lentil porridge garnished with millet grain. The lentil stew was an unusual but surprisingly pleasant take on baked eggs. 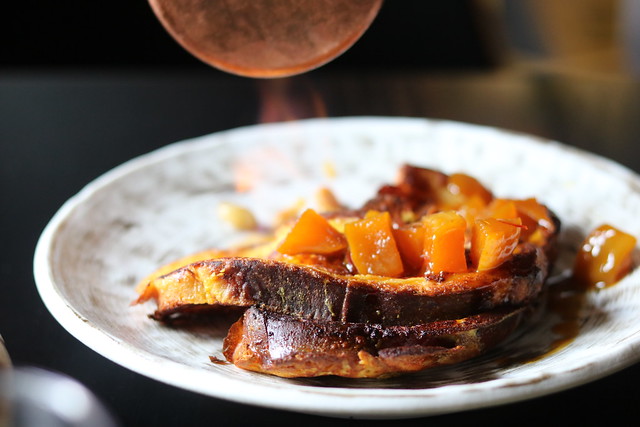 We can’t call this a brunch unless there’s French toast or waffles. The snap-dragon French toast plays a nod to an old English game in which kids pluck raisins from a fire before they get burned. While that’s a scary and totally unsafe game, we appreciated the backstory and inspiration behind this item. The French toast was flambéed as it arrived tableside, and it was incredibly rich and had more going on than most people’s social lives. With challah bread and jaggery topped with saffron caramel cream, pear, and rum raisins, what’s not to love? We’ll certainly be back for more at the Chelsea-based restaurant.

The Bitches Say: A for a contemporary Indian brunch with flavorful dishes prepared with high-quality ingredients and a playful presentation.