Between rushing around town to get ready for the holidays, we made sure to squeeze in brunch. We are professionals, after all. We were invited in to try Aperto, an Italian dining room and market in between Foggy Bottom and Farragut Square, a part of town that is rather dull on the weekends. And, despite the buzzing holiday season, this particular Sunday morning was no different. 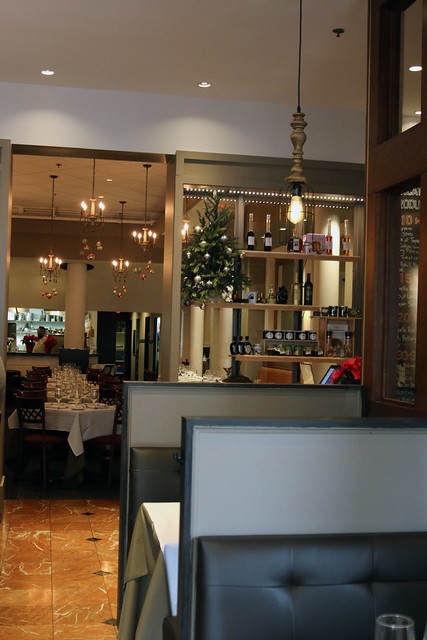 While the back of the market is adorable, we were seated at the front, near the window, where the lighting was nice and we were near the live jazz duo. The duo was playing festive Christmas tunes, which really amplified the experience. Unfortunately, they were playing in front of this atrocious, bright and utterly out-of-place mural, which really ruined the previously acceptable decor. 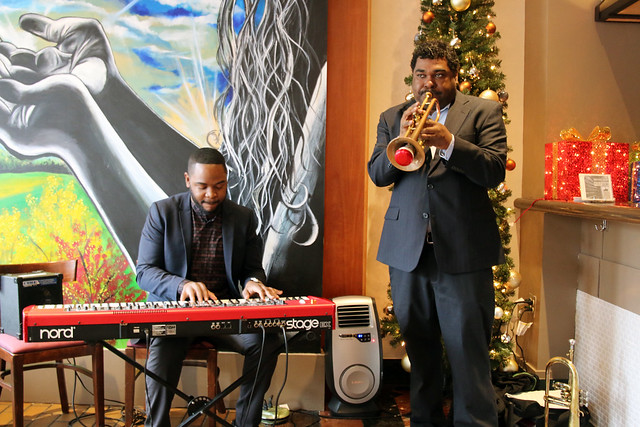 Rounds of mimosas, peach Bellinis, and coffees were ordered first. The Bellini had a nice peach puree mixed in, but the promised grilled peach was nowhere to be found at first; only in refills of the drink did the puree appear on the rim. The mimosas were strong and not quite as sweet as the Bellinis, so Annie switched over. 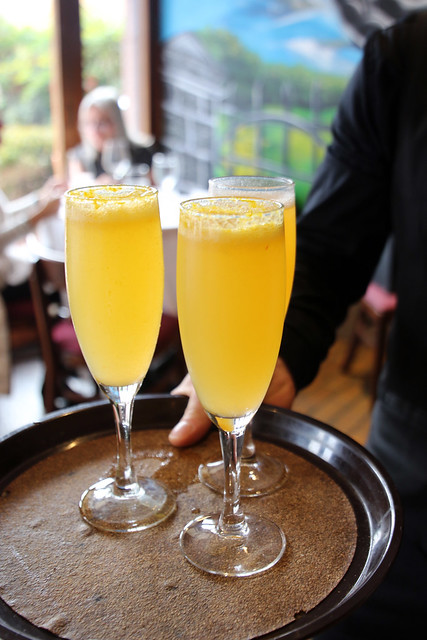 We started with a plate of cheese and charcuterie, in which we chose from a selection of meats and cheeses. Naturally, we went with the prosciutto di parma, caciocavallo podolico dop (a semi-firm cheese from cow’s milk) and pecorino di moliterno (a semi-hard sheep’s milk cheese). All were delightful and the plate helped subside our hunger so we could choose entrees. 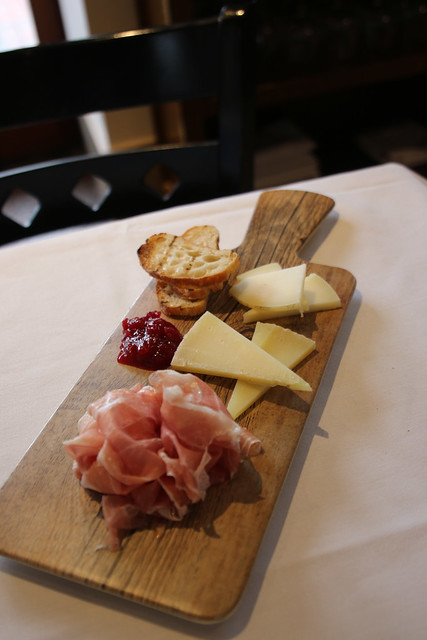 HBIC Cori Sue’s steak and eggs was startlingly lackluster. The steak, ordered medium rare, was overcooked to a rubbery medium, with a tell tale thinness and grill marks of a steak served at a chain restaurant. The eggs were dry and dull—unsurprisingly given the steak’s quality. She did appreciate that the plate came with helping of fresh arugula, lightly dressed in olive oil. 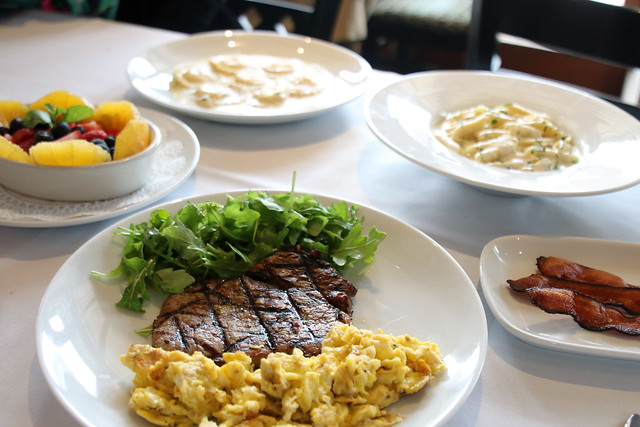 Social Bitch Annie is a mac n’ cheese girl through and though, so she couldn’t resist penne quattro formaggi. It wasn’t much of a brunch-y dish, but she enjoyed it nonetheless. The cheeses blended together nicely for a filling portion. 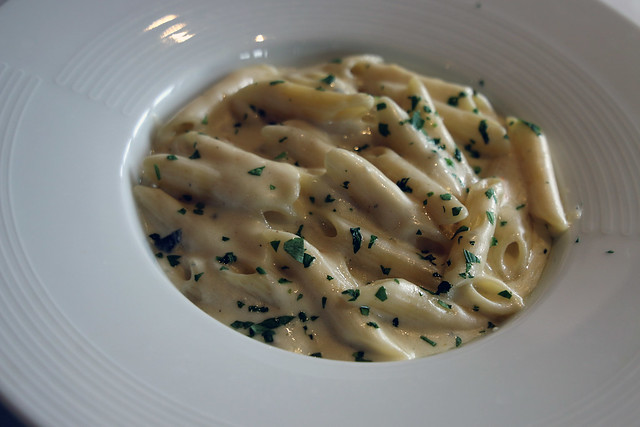 Following in the pasta tradition, Baby Bitch Tess ordered the ravioli. The sauce was delightful and creamy. However, the dish was was pretty chilly by the time pictures were over. We weren’t sure if the timing threw off this dish or if it was just too al dente. The outside of the raviolis were hard, but the filling inside had a nice flavor. 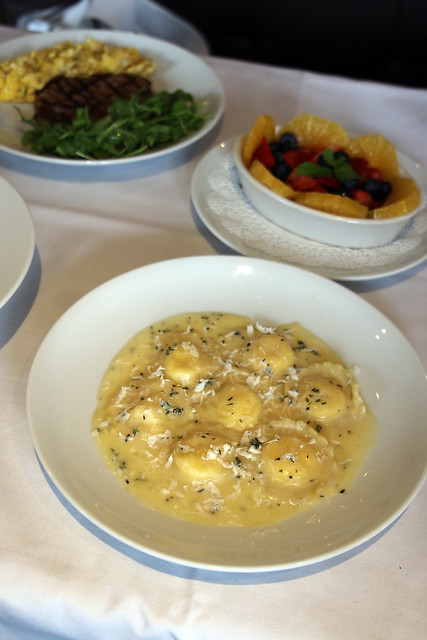 We also knew we’d need a few sides, so we ordered the bacon and a plate of seasonal fruits. The bacon was underwhelming; three lone pieces came out on a plate and we weren’t particularly impressed. The fruit bowl was delightful however, filled to the brim with oranges, strawberries and blueberries. 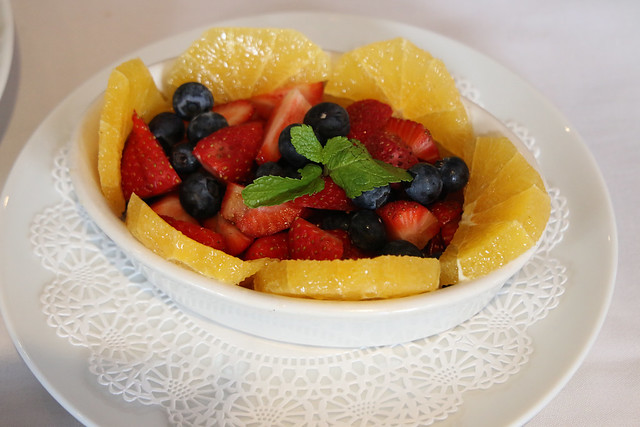 Unfortunately, the service was our least favorite style of service: overly attentive at the front—and then nowhere to be found once you need your check. At brunch, we want to catch up with our friends, so after our coffee, water and mimosas arrive, we’d like to chat, not receive three inquiries for our orders. Then, the waiters did not communicate with one another, so they stopped by to take the same orders. Then, after our meal was concluded, our waiter was out back chatting with the band, so we were left waiting for quite some time. 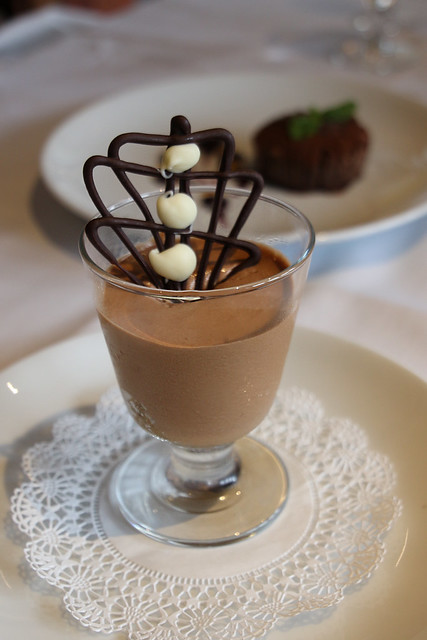 Meanwhile, the tartufo was as dull as it looked—we so would have preferred the tiramisu.

The Bitches say: C-. An average spot in a lackluster part of downtown. While the jazz is delightful and parts of the ambiance are nice, Aperto will need to innovate beyond a bottomless mimosa deal in order to keep up with the competition.