Mondays can be rough. But if Monday happens to be a holiday, you live in a city that serves brunch on said holiday, and it’s 75 degrees in February, then Monday is where it’s at. 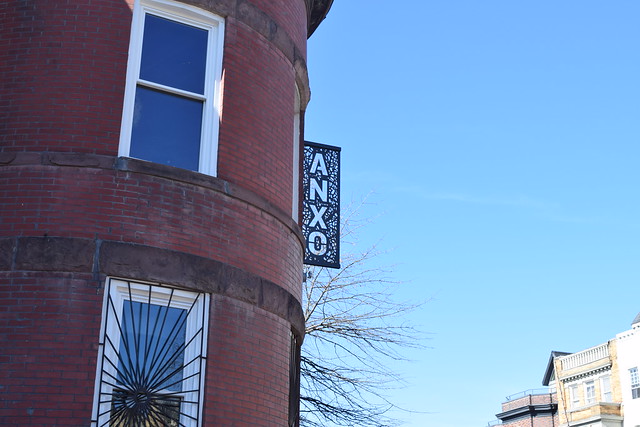 I took full advantage of the unseasonably warm weather on a recent off-day, which resulted in a sea of Ray Bans and bare legs on outdoor patios, to catch up with a friend and fellow female entrepreneur, Tali of Welcome and Wishes. Her job is to shop for a living, curating adorable items for bespoke gift boxes. Naturally, we always have a lot to talk about. 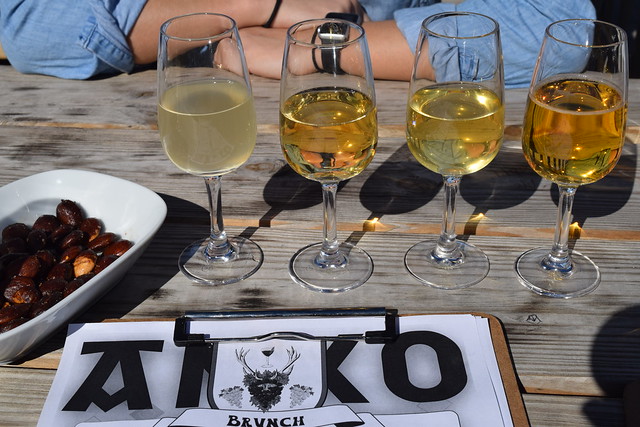 Tali is a fellow New Yorker, which means she’s always down for a good time. Her easy-going attitude came in handy as our waiter took our drink order. When we inquired about how the porrons, traditional Spanish wine pitchers, work, he said “you literally hold it above your mouth and drink it like a beer bong.” We exchanged “We really shouldn’t” looks, shrugged our shoulders, and responded, “OK, sold!”

The Clara porron is a lager mixed with lemon soda, and tastes a lot like a light beer with a fresh squeeze of lemon. This cocktail was delicious and served in the porron, which looks like a glass watering can. We each made a graceful attempt to imbibe the traditional Spanish way. But, after nearly chipping a tooth and spilling lager down our shirts, we agreed that our beer bong college days were far behind us. We decided to play it safe and polish off the rest of the porron in two glasses, with a side of Marcona almonds to nosh on while we perused the adventurous menu. 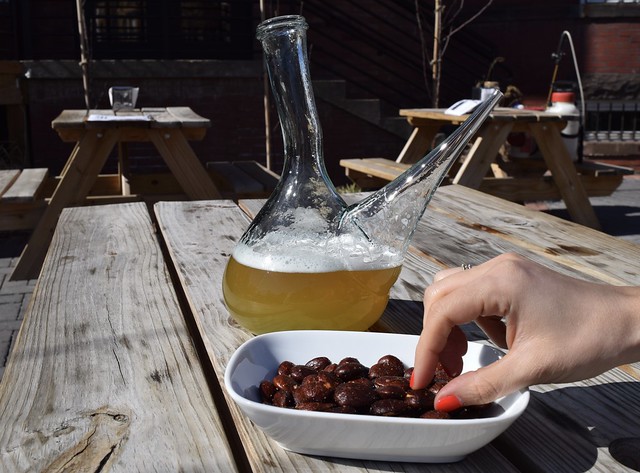 As one does at a Spanish restaurant, we began with the cheese plate and the escalivada montadito, roasted eggplant with sweet peppers and anchovy on a sliced baguette. The tortilla de patatas montadito also caught our interest. The tortilla was served at room temperature, with the square, potato patty sandwiched between pan con tomate, a humble Catalonian dish and one of my absolute favorite tapas. The roasted eggplant was just alright—we would have preferred the stems to be removed from the sweet peppers. And, although I don’t mind them, anchovies are polarizing accouterments to any dish. Meanwhile, our porron ran dry, so we each sampled the cider flight of the day, per my recommendation, after my experience earlier in the week at the first floor bar. 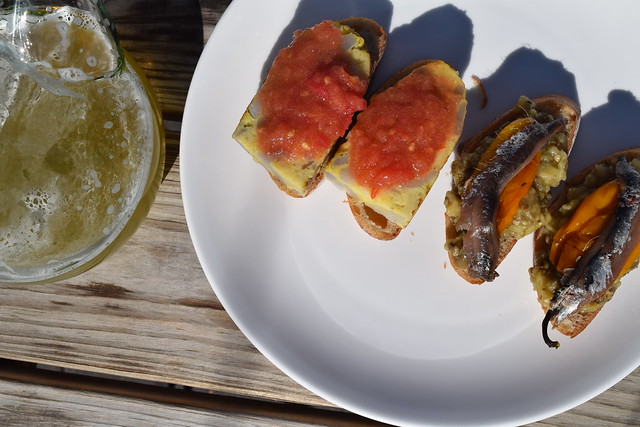 When the cheese plate arrived, we noticed it was haphazardly arranged. We don’t judge a book by its cover, but we do eat with our eyes. Nevertheless, we delved into the cheese and quince paste, crafting mini sandwiches with the charcuterie fixings. We were disappointed that most of the cheese wedges were severed close to the rind, so there was very little substance to each piece. We sighed and moved on. 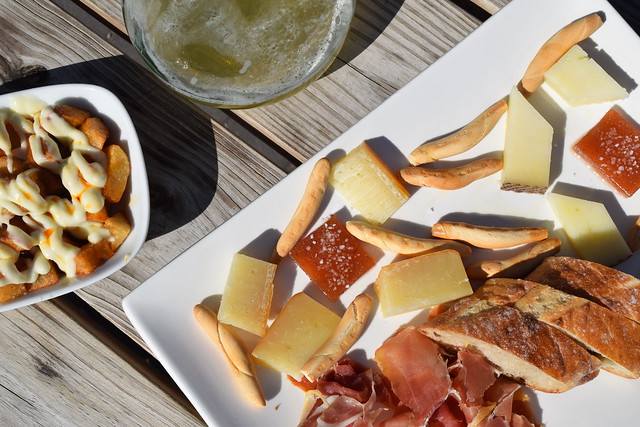 The menu didn’t offer a ton of traditional brunch items. In fact, the only dishes reminiscent of brunch were the poached egg with chorizo, and the Basque French toast. We chose the latter, which arrived in a nice portion for sharing, and was topped with a dollop of whipped cream, walnuts, and an ice cider reduction. We liked how the sweet dish incorporated the restaurant’s dedication to cider. And, the walnuts added a welcome, crunchy texture to the dish. 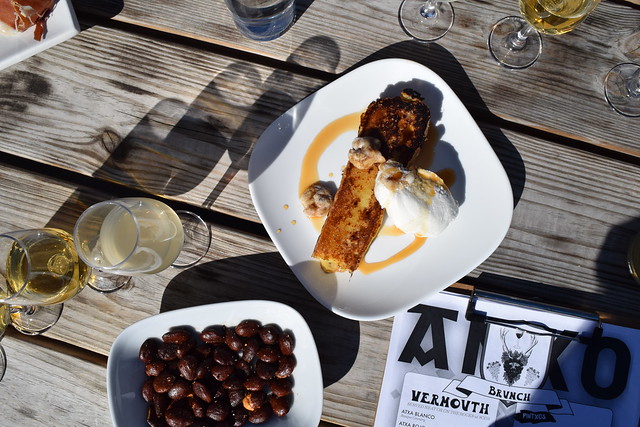 The patatas bravas were good, but weren’t as flavorful as we’ve had on other dining experiences. The potatoes were served in small chunks, similar to what you would find in a breakfast hash. It was a solid take on the traditional Spanish tapas and anything doused in aioli is usually addicting. 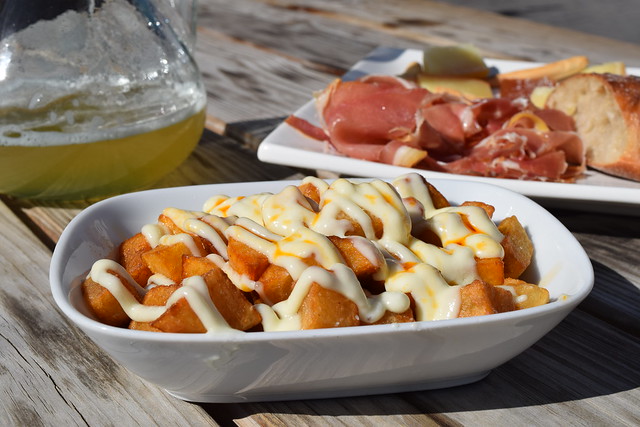 We finished our cider flights and basked in the sun noting how it was nice not to feel crammed on a patio in the city, before realizing we should have put on sunscreen–in February. While the brunch could have been better, we agreed that Mondays aren’t so bad, after all.

The Bitches say: B-. The outdoor patio is spacious and the porrons are Instagram gold, but the brunch menu and presentation leave much to be desired.