When deciding where to uncork their next location, the team from Brooklyn Winery deliberated on 20 U.S. cities before ultimately choosing Washington, D.C. According to co-founder Brian Leventhal, D.C. won by a landslide based on the urban demographic and sheer number of events that take place in our fair city. This September, District Winery opened its doors as the first commercial winery in D.C. 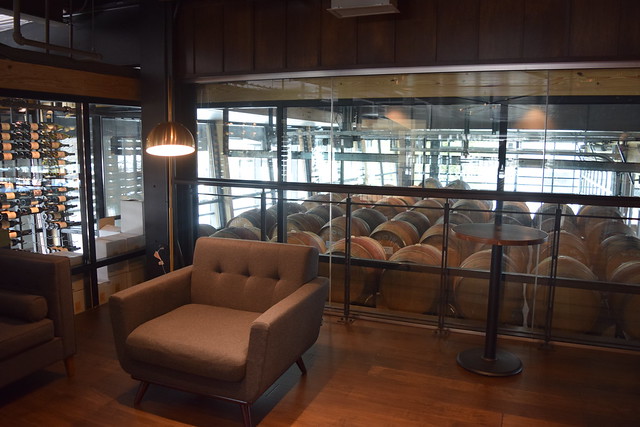 The multi-level space residing in Navy Yard is certainly multi-functional. You are greeted with a long tasting bar upon entering the glass encased building. Steph lives in the neighborhood and will often swing by on her way home from work to purchase a bottle of wine to bring home for dinner. It’s nice that the winery affords you the option to hang out for a tasting or grab a bottle of wine to go. To the right is the entrance to the industrial, light filled restaurant, Ana, named for the sweeping views of the Anacostia river. If you follow the staircase next to the tasting bar, you’re led to a cocktail space with aerial views of both the barrel room and the restaurant. 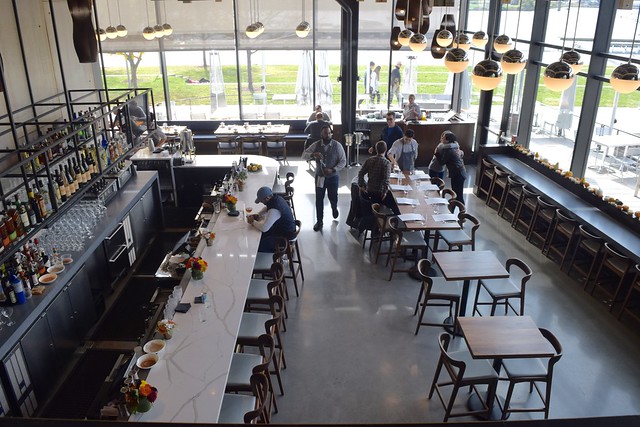 One more flight of stairs and you’ve entered the beautiful event space covered in dark wood and lined with mid-century wall sconces. They were prepping for a wedding the day we toured the space and we can see why. The gorgeous terrace has unmatched views of Navy Yard and the Anacostia River. Bistro lights, a retractable roof, and heat lamps make the space a year-round attraction. 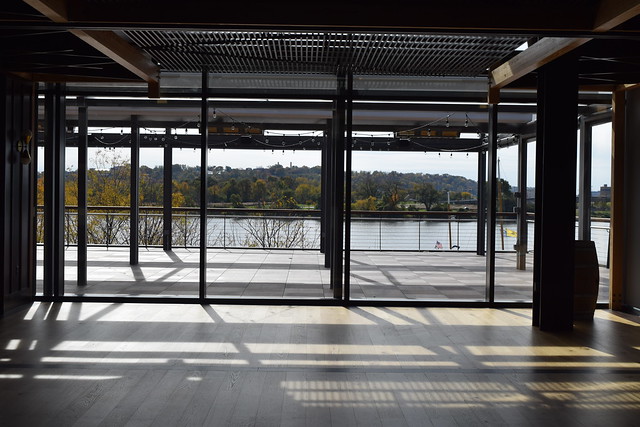 After sampling a small flight of wines, which use grapes sourced from New York, California, Washington state, and Virginia, we headed into Ana for brunch. 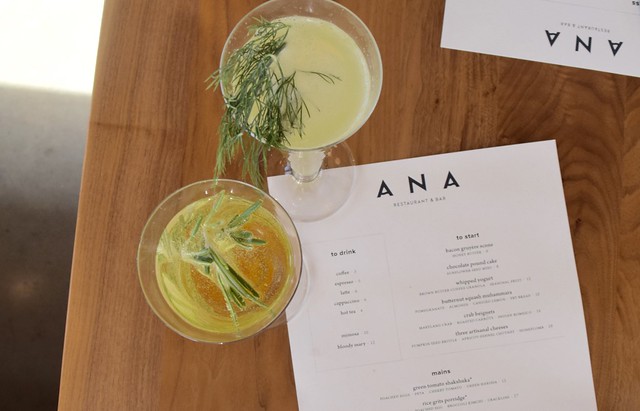 Intrigued by the name, Annie order the “In a Pickle” cocktail. With cucumber, dill syrup, and sparkling wine, it tasted like luxurious, spiked spa water. We realized it would be a great cocktail to nurse a hangover.

Steph’s cocktail choice, “Sounds Like an Apology,” combined rosemary, elderflower, sparkling wine, and a bitter sugar cube. This is one of those cocktails that should be consumed quickly, or else the cube dissolves and the drink becomes too sugary. 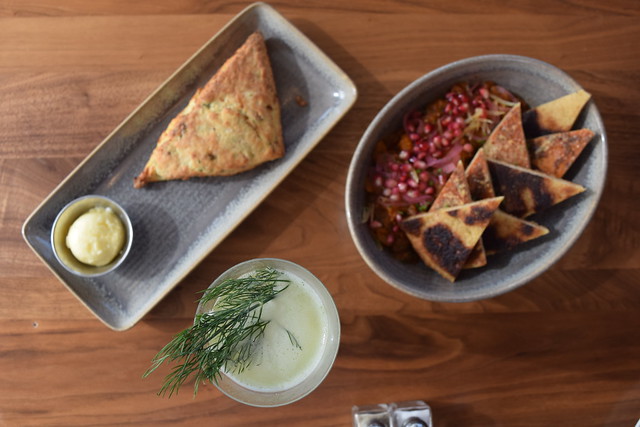 The Bacon Gruyere Scone with honey butter was beckoning us. It ended up being the most delicious savory scone we’ve had in awhile. Seriously, not a crumb was left of this perfectly moist, umami quick bread savory treat. 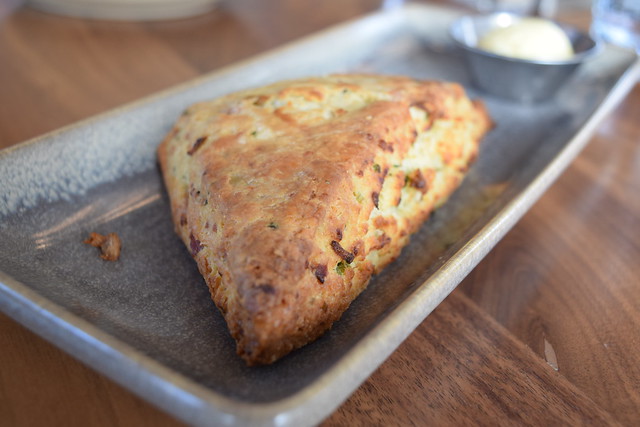 To accompany our scone, we ordered the Butternut Squash Muhammara which was reminiscent of chunky hummus made from butternut squash, topped with pomegranate, almonds, and candied lemon and served with fry bread. The spread was delicious, but Steph almost broke a tooth biting into the burnt bread. We didn’t love that. But the butternut squash and pomegranate was an unexpected combo that feels very seasonally appropriate. We’d eat it again, but with a different tool for consumption. 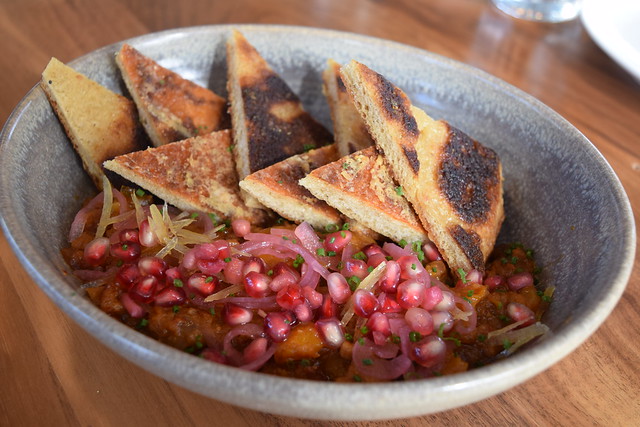 At this point in the meal, we switched to mimosas, which were fresh and bubbling – just how we like ‘em.

We decided to order two more entrees with the intention of sharing them. The Potato Pancake was not what we expected. We were looking for a latke, but instead got a stack of thin cornmeal pancakes, topped with smoked salmon mousse, chunks of pomme paillasson (basically high end tater tots), and everything spice. The dish was still tasty, albeit it dry, but we couldn’t help but feel a little let down. 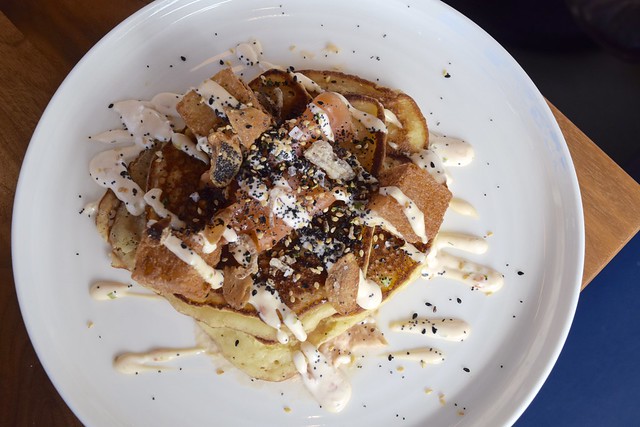 The wild mushroom tartine was already cut into thirds, which made it perfect for sharing. The mushroom “faux gras” was rich with flavor and the hazelnuts gave it an unexpected earthy flavor and crunch. The fried egg and parmesan took this dish to a brunch level without making it too heavy. 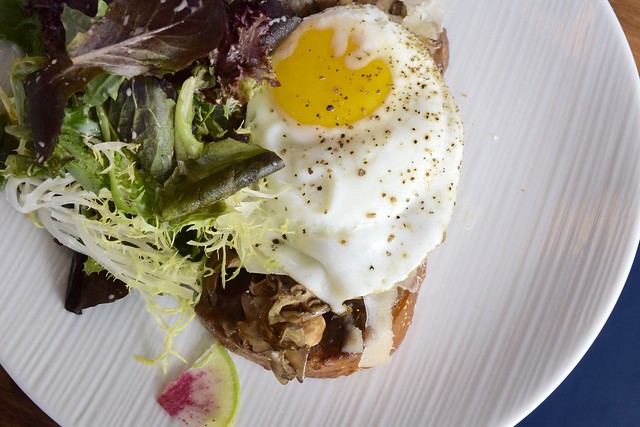 We are excited to welcome District Winery to the booming Navy Yard neighborhood. While there are still some kinks to work out in the kitchen, the service and the space make up for any early shortcomings.

The Bitches say: B+. The beautiful views and homemade wine are reason enough to make a visit to District Winery. Take a winery tour and then head to Ana for inventive cocktails and a dynamite scone.