The Wharf’s splashy new rooftop lounge 12 Stories is everything you’d expect from the latest spot to debut in southwest waterfront. With more than 3,000 square feet of lounge chairs, high top tables and breathtaking city views from the deck, the rain was not going to stop me from being one of the first Washingtonians to sample their small but mighty brunch menu.

Cinco de Mayo marked seven years since I graduated college, so I wanted to commiserate on adult life with none other than my trusty brunch pal Adam, who also happens to be one of the first people I met on campus freshman year. We were greet by Jessica, the general manager of 12 Stories. It’s as if she had done her homework prior to meeting us. As we perused the menu, she informed us she would just send out an array of cocktails from the bar for us to sample. Okay, we were already fans.

The first three to come out were the Oliver Spritz, Lucy’s Diamond and Golden Compass. If you haven’t leaned into the trendy turmeric fad, start your journey with the Golden Compass at 12 Stories. This was nothing like the cocktails I’ve had in the past and I’m certain there won’t be anything better I’ll taste for quite some time. Both powerful on the palate by themselves, the ginger and turmeric perfectly complimented the rum without taking away from the liquor’s smooth flavor. Jessica noted this was one of her favorite drinks, and now it’s without a doubt mine. 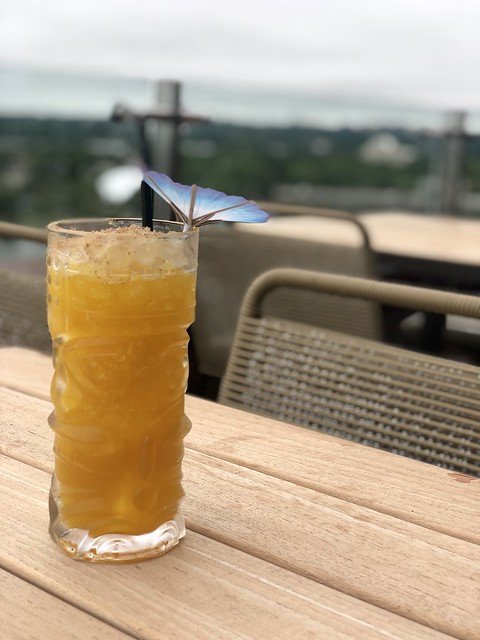 One admirable feature about 12 Stories is their commitment to making everything in-house. As you continue reading this review, you’ll soon recognize how greatly it separates them from the competition. Adam was a huge fan of his spritz, remarking how they perfectly understood the proportions between the vodka and St. Germain.

We quickly categorized our brunch to a reminiscent theme. As Adam and I reflected over the last seven years outside of our small liberal arts campus in Missouri, Chef David came prepared with a story for each dish he brought for us to sample.

Chef David is a New Yorker who has firmly solidified his place in the D.C. food scene. 12 Stories marks his third stint spearheading a restaurant in Washington. The Bahama-born chef previously oversaw kitchen operations at The Mandarin Oriental and MGM National Harbor.

His hospitality is unmatched. After getting a feel for our palates and an idea of what we were cravings, the dishes started pouring out. First came a yogurt parfait made with vegan granola and (one of my favorite breakfasts) apple-cinnamon oatmeal. As I previously mentioned, David credited his upbringings feasting on oatmeal as a child as inspiration behind this plate. After one bite, I was transformed back to my childhood as well. Notes of cinnamon rang out with each taste, and the soft apple garnish was a pleasant mix of sweet and slightly tangy. 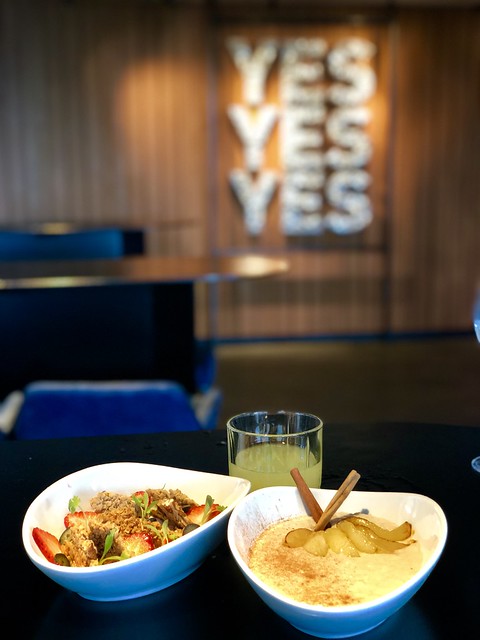 Adam’s parfait was just as delightful. Maybe Chef won’t want me to reveal, but instead of using honey to bind the ingredients, he uses coconut oil and for more depth  adds coconut within the actual granola.

Next up came our entrees. But before that, Jessica presented another delicious cocktail: their signature Bloody Mary. Of course, the mix is done in-house and unlike other restaurants who mass produce their base, you can control the level of spice at 12 stories.

I was adamant on trying the buttermilk chicken sandwich. Adam wasn’t too picky, so they brought out the smoked salmon bagel for him. The cream cheese is whipped, so it makes for an airy bite. The bagel itself is everything flavored, because according to Chef “why not?” and this Bitch agrees. There’s a heaping serving of smoked salmon on top that even alone is worth sending your compliments back to the kitchen.

Chef says his chicken is prepared with a dry rub he can’t really reveal, fried to perfection and then placed over a liberal smear of aioli that sorry — he can’t tell us either. The fries which accompany it are of course cut and prepared inside their kitchens and coated with seasonings aplenty. On the side comes a harissa mayo perfect for dipping both the fries and leftover bagel (at least that’s what I did). 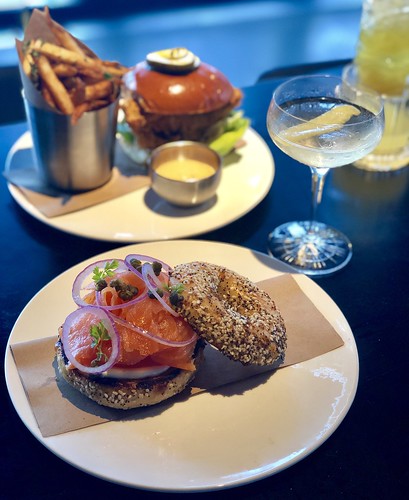 Our afternoon wouldn’t be complete without an egg dish, so Chef brought out the mushroom frittata. By this point, we were arguably stuffed. Then, Jessica emerged with yet another cocktail: the J Street Sprtiz. A refreshing blend of vodka, amaro nonino, lime juice, raspberries, domaine chandon sparkling and soda. Visually, it is stunning. Thankfully, it tastes even better. On those hotter than hell D.C. summers that are approaching, this is the drink you’ll want to sip as you and a date brunch at 12 Stories.

The frittata does not disappoint. Large chunks of mushroom are baked inside a light egg mixture that falls apart with each picking. The roasted pepper puree brightens up the plate, and adds another layer of spice. 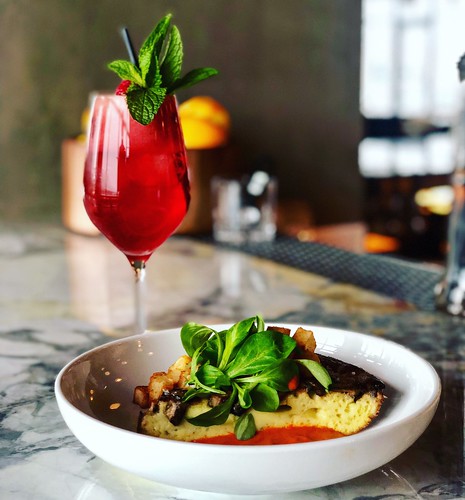 Adam and I looked out the window dreading the thought of going back outside into the rain. Thankfully, we didn’t have to for at least another half hour. Jessica asked us if we wanted more cocktails, to which we enthusiastically replied yes. She undoubtedly saved the best ones for last: the Blue Velvet, Ube-b and the Killroy Gimlet. 12 Stories has a special partnership with Casamigos, so you can expect their tequila-laced cocktails to be made with that brand. The Blue Velvet is a fun way to combine an unusual fruit for cocktails and turn it into one of the most beloved drinks on the menu. I’m not much of a blueberry fan, but drinking this made me consider. 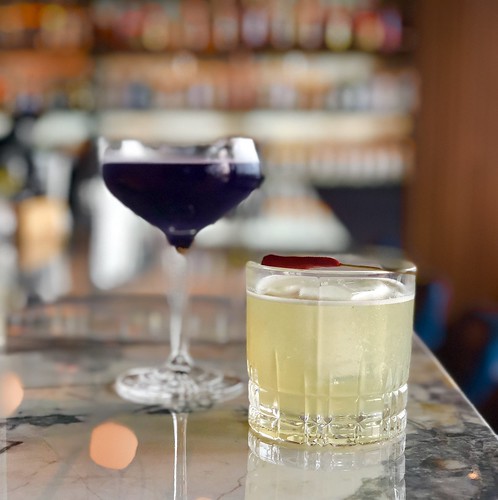 Our trusty bartender Kyle gave us a brief backstory on Ube. For those readers unfamiliar, it’s a Tagalog word for “purple yam.” On the outside, it looks similar to a gray-ish potato, but on the inside, it’s a surprisingly vivid purple. Kyle suggested its vanilla-like taste give off the aromas of sugar cookies. The Ube-b faintly sweet and when combined with peach and orange blossom vodka, renders a floral aftertaste. 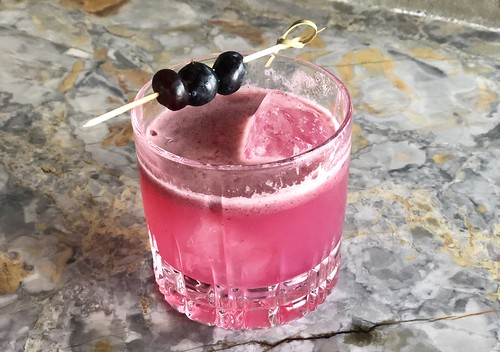 The Bitches say: five Champagne flutes for 12 Stories. Come for the delicious (and we mean delicious) food and drinks, stay for the day party with a live DJ that cranks up the volume once brunch concludes. Chef David, Jessica and their entire staff will surely leave their mark on The Wharf and we’re so excited we were one of the first ones to experience this incredible rooftop lounge. We will be back.