Mediterranean fare with one of my best Bitches? Sign me up. We knew it was time for another visit as soon we were invited to check out the newly revamped brunch menu at Zaytinya. As a vegetarian, I’ve dined at the Greek spot on dates with guys who want to impress me since José Andrés is known to be rather experimental with vegetables. I assumed brunch would be no different. It was Social Bitch Annie’s first time and she was over the moon about tasting everything. 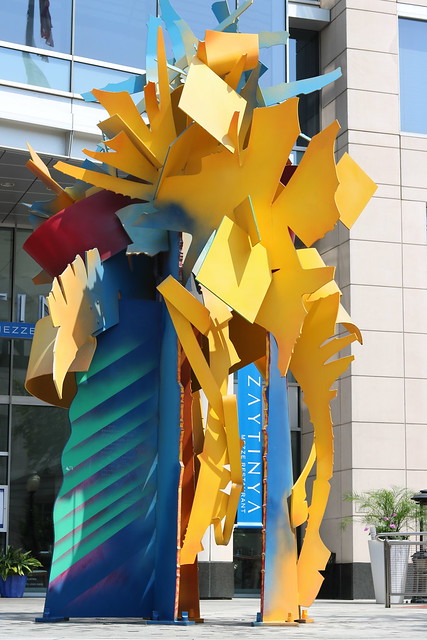 Being semi-responsible young adults, we woke up early on Saturday and got our bearings in order to enjoy a lovely summer afternoon. As I get older, my free weekends are becoming fewer and far between. There’s no way to describe how good it feels to wake up hydrated and functional. This is partly why I’ve been attempting to send myself home at reasonable hours on Fridays. Some nights I stand defeated. But this particular weekend, I was feeling good on Saturday morning.

The high ceilings, peaks of sunshine, and blue hues make for a calming and upscale atmosphere at Zaytinya. If you’ve ever had the pleasure of brunching with me then you know that I need precisely three different beverages during my meal. Caffeine, champagne, and water are necessities. I began with the Turkish coffee while we dug into the flatbread.

Side note: I think it’s genius how the balsamic forms a Z in the olive oil regardless of how many times you mess with it. 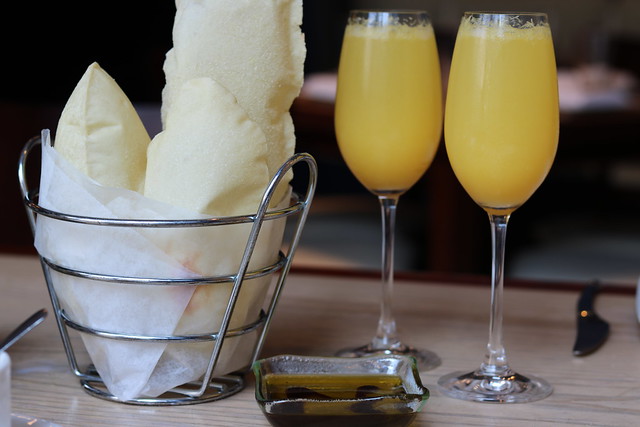 The Turkish coffee is not to be missed. I made a point to enjoy it iced which did not dilute any of the smooth and semi-sweet flavor. Our server Yassine brought us mimosas, which were made to perfection at $10 a glass. He explained that Chef Michael Costa wanted us to experience all of the brunch items. Yassine noted that they were aware that I’m a veggie-centric Bitch and would prepare a veggie version of the items that Annie would be trying. This was music to my ears. I also appreciated how considerate he was in asking if eggs and dairy would be an issue. 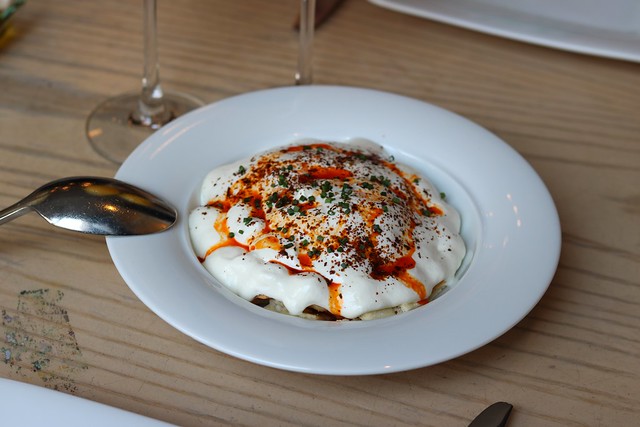 The Cilbir arrived first. Annie and I devoured the poached egg and pita topped with greek yogurt. It was flavorful with the paprika butter. The pita provided for a nice crispiness and we were delighted to find that it wasn’t soggy. 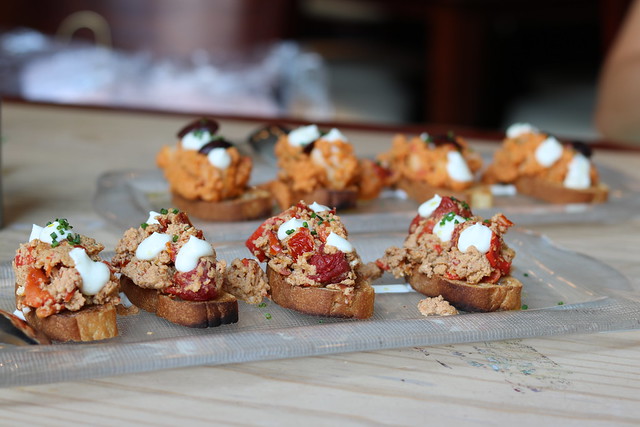 Next up the menemen came out. We were overwhelmed with how beautiful these looked. Annie had the lobster menemen while I enjoyed the traditional vegetarian menemen which came with roasted red pepper instead. Menemen is traditionally served as Turkish style scrambled eggs, tomato and peppers—these came on crostinis. Annie wasn’t a fan of the lobster menemen. She noted that the egg made for a strange texture and the paprika overpowered the flavor of the lobster. She tried the traditional vegetarian version and enjoyed it much more. The menemen was satisfying for me, I didn’t leave a crumb behind! This was an amateur move since I had no idea how many more mezze plates were still to come. 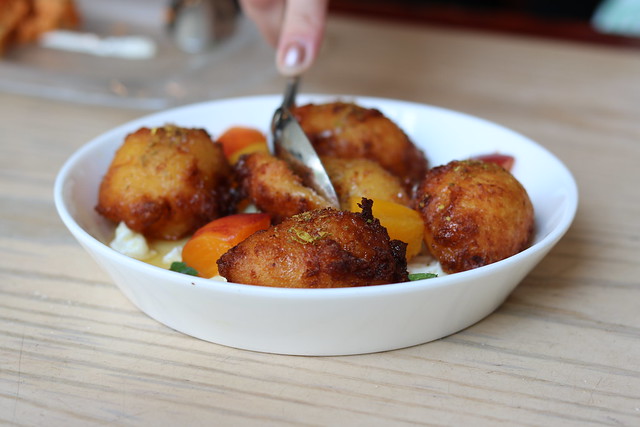 The goat cheese loukoumades came out next—a nice change from the savory items. We were especially looking forward to these. One of the first life lessons I learned as a Bitch is to always order doughnuts when on a menu.  The Greek doughnuts were filled with goat cheese and came out piping hot. The honey and fruit gave them just the right amount of sweetness. We were especially impressed with the flavor combination of goat cheese, peaches, and mint. 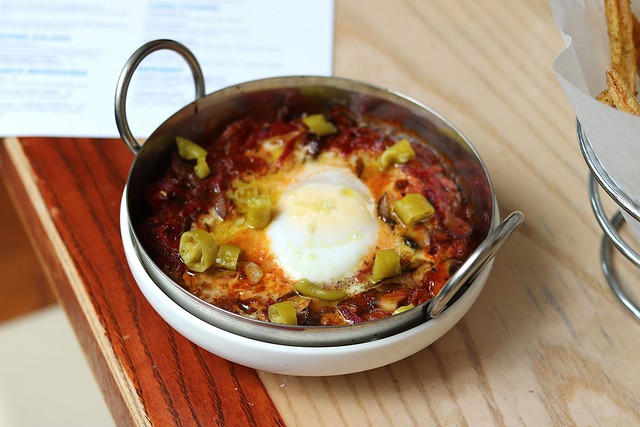 The Shakshuka was served next. Annie had the duck Shakshuka which is one of their newer items. The duck egg was poached in a peppery tomato sauce with pickled chiles. She’s a big fan of Shakshuka in general and this lived up to her expectations. I was beginning to get stuffed, but managed to have a few bites of the veggie Shakshuka and instantly liked it with the mushrooms. The eggs were cooked well and the tomato sauce was flavorful to say the least. 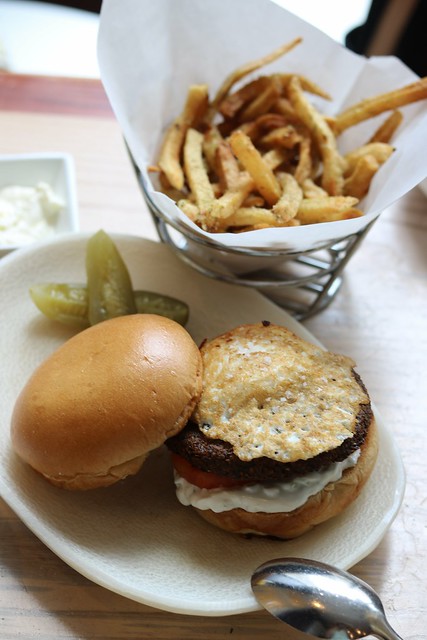 We couldn’t handle any more food at this point and could feel our waistlines expanding. Annie was still eager to try the falafel burger while I wasn’t sure if I was up for the challenge. Regardless, we split the massive burger and fries. The burger was topped with a fried egg and cucumber tzatziki. Annie and I both agreed that the falafel patty tasted great and wasn’t dry at all. The egg and tzatziki were winners too. The fries were unique as they were seasoned with sesame, cumin, and dried mint. The garlic yogurt that accompanied the fries was an inventive condiment. 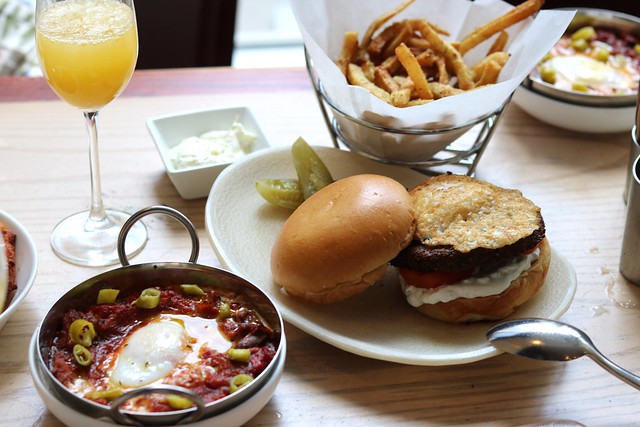 If we weren’t overwhelmed already, the LBLT sandwich came out for Annie. I was secretly glad that this wasn’t for me. She managed to have a bite of the smoked lamb bacon and heirloom tomato sandwich. As a sucker for tzatziki, she loved the addition of the sauce to the iceberg lettuce. It was a huge sandwich though, so she knew she’d be taking it home for later.

Next up, we were tasked with getting through dessert. First to arrive was the Greek yogurt topped with seasonal berries and walnuts. The combination of yogurt and fresh mint leaves for me is reminiscent of many traditional Indian items so this was particularly refreshing. 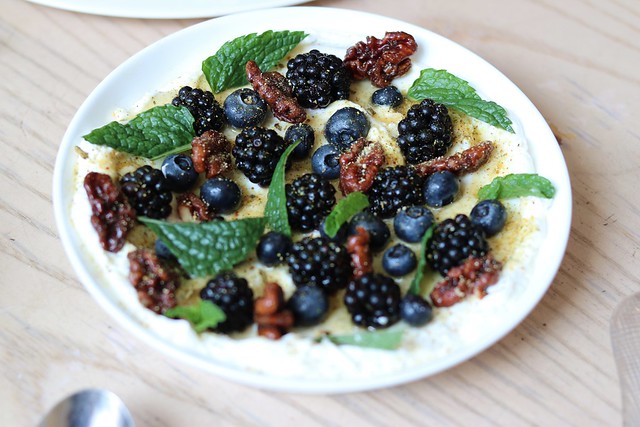 We were in utter shock when we were told French toast was still ahead. Annie and I were relieved when we saw the size of this dish. We wished this came out sooner, but were glad that we were able to try it anyway. The French toast— or as they refer to it, Ashta—is a Lebanese style French toast with banana and orange blossom honey. The Ashta was decent, but became more of an afterthought based on how stuffed we were from all of the other items we had eaten. 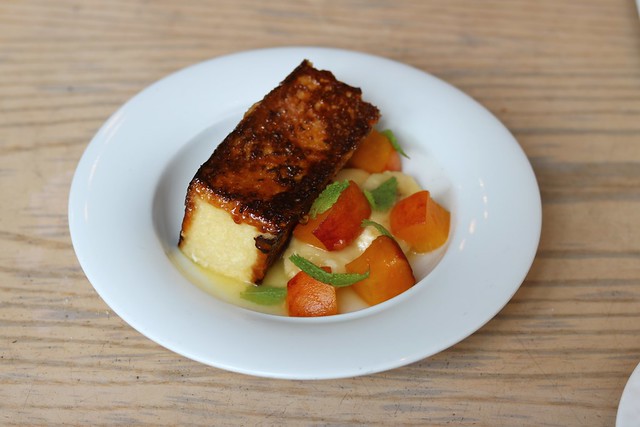 Annie and I were ready for a serious food coma, but still appreciative of being able to taste the whole brunch menu. The wonderful service and experience provided by Yassine and Chef Michael Costa didn’t hurt either. I was especially in awe at how accommodating they were.

The Bitches say: A. A calming and upscale restaurant with impeccable food, flavors, and service. We certainly had our list of favorites that we would come back for.