I love getting brunch spot suggestions from friends. One restaurant that has come up time and time again is Wilde Bar & Restaurant. Everyone quips that the ambiance is cool, and that the brunch menu is enormous. On the one rogue 60 degree Saturday in January, Cameron and I made our way to this Lakeview hotspot to give it a try.

Wilde is a large, upscale Irish pub with an extensive brunch menu and an even larger beer list. There is a strong decorative leaning towards books, as the whole concept behind the restaurant is the celebrating the famous playwright, novelist, and poet, Oscar Wilde. What’s fun are the book nooks throughout the restaurant, adding an element of comfort—I loved everything about the interior of this place.

Cameron and I arrived early for brunch, and were one of the first groups in the restaurant at 10:30 a.m. We were seated near the front windows, which were propped open to let in that 60 degree breeze—you have to soak it up while you can! Wilde is a dark space, and as you make your way further back into the restaurant, it can get quite dark.

Cameron and I were both impressed with the large menu and the array of options. Cameron and I honed in on our choices, even before our waitress greeted us. 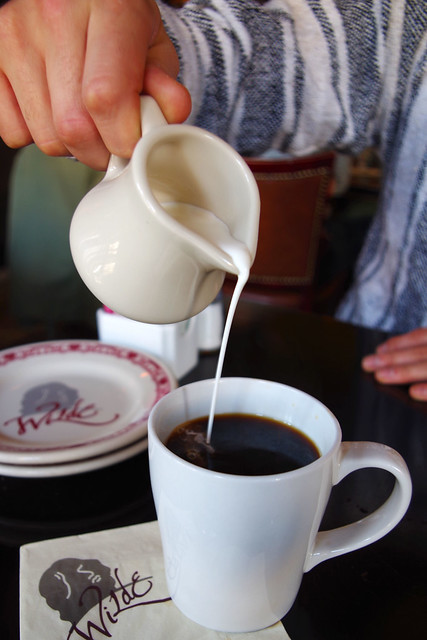 To start, the two of us enjoyed a cup of coffee. Our coffees came with sweeteners, and a tiny pitcher of half and half that both of us used up. The coffee offered just enough caffeine kick to get me through the day.

As the two of us were chatting about our plans for the day, our food was delivered to the table. It was an incredibly quick turnaround from when we ordered our food so I was impressed. Granted, it wasn’t too busy, but it’s always nice to not have to wait too long. 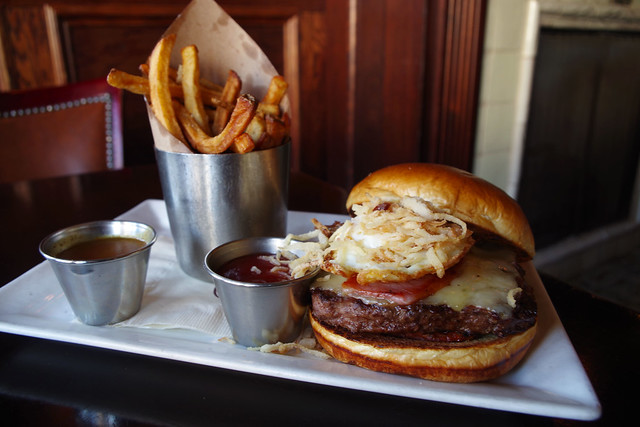 Cameron was eyeing the breakfast burger, which included Angus beef, cheddar cheese, caramelized onions, and rashers of Irish bacon. It also came with a side of fries, and a very interesting curry sauce.

Ultimately, this was not the best burger Cameron had ever tried. The burger was overcooked, creating a dry consistency. The burger itself was also huge and hard to eat in a manageable way. To keep with the overcooked trend, the eggs were overdone the curry sauce for the fries was more like gravy than a dipping sauce. All in all, we wouldn’t recommend the burger. 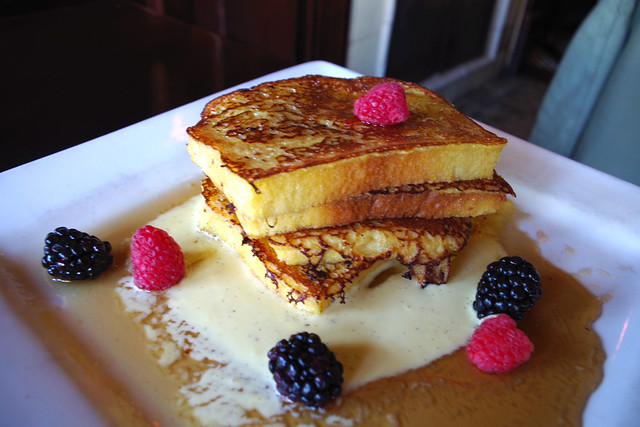 My sweet tooth won me over, and I decided to try the Brioche French toast. It was several pieces of French toast, stacked up in a tower and garnished with raspberries and blueberries. The plate was covered in syrup and a crème anglaise.

Talk about a sweet dish! The French toast itself was well cooked, and I enjoyed the hints of vanilla and cinnamon. The crème anglaise was a nice addition, but it made the dish far heavier and ultimately, sweeter, which it didn’t need the help with. I only ate about a slice and a half of the toast, and was left wishing I had gotten something savory.

As Cameron and I were wrapping up our meal, Wilde had started to fill up. I know this is a popular restaurant, and is a neighborhood favorite, but I was left asking myself if it was worth the hype. Maybe we tried the wrong dishes, but for the coffee to be the only thing we didn’t complain about left me, to say the least, disappointed.

The Bitches say: C-. For all the recommendations and praise Wilde has received, we were left wondering if it’s the theme and décor that leaves the impression, because the food certainly does not.

Wilde Bar & Restaurant serves brunch every Saturday and Sunday from 10 a.m. to 3 p.m.