After a long week of travel and presidential election drama, I couldn’t have been more excited to spend a Sunday brunch celebrating one of my best girls.

I have a pretty good pulse on all of the authentic Italian haunts in Washington. A. Litteri is the best place to get an Italian sub; Centrolina is where I uncover rare Italian wines and pasta; and Via Umbria is where I go for imported extra virgin olive oil. And, now, it’s also one of my favorite places for brunch. 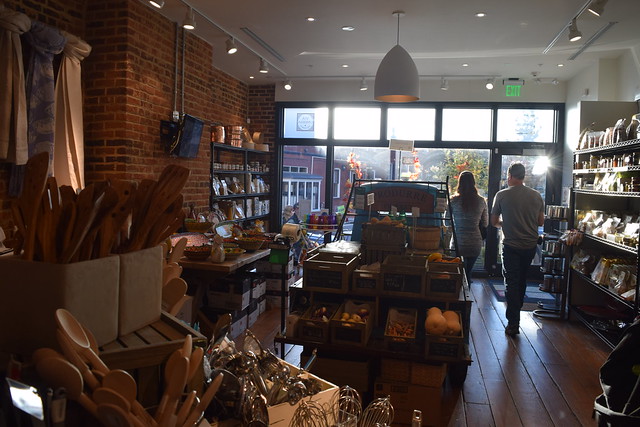 The Georgetown gourmet market sells wine, ceramics, and other imported Italian goods, primarily from the region of Umbria. It’s been one of my best kept secrets for a few years. Via Umbria recently began brunch in an amazing open kitchen on the second level of the market. 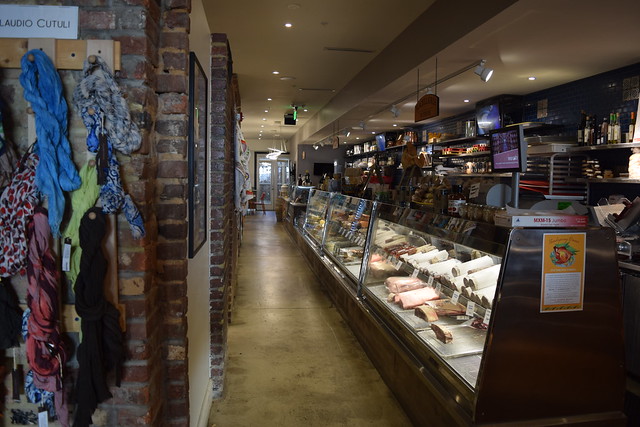 For $38.50 per person you can indulge in bottomless mimosas, Bellinis, or Bloody Marys, several appetizers, a selection of one main course, two family-style sides, and a dessert—all served around a communal table. 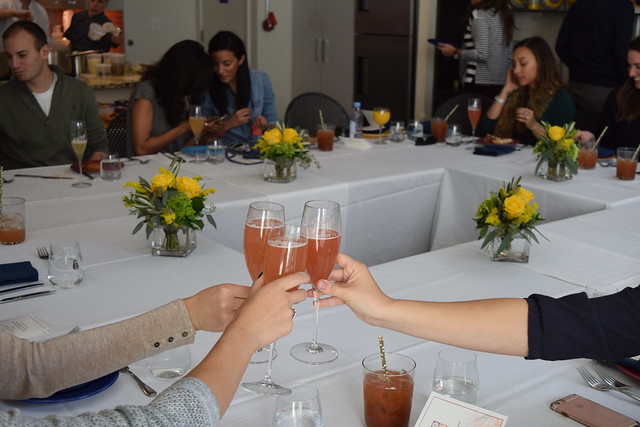 As if the deal could get any better, the brunch also happens to be prepared by a female-led kitchen. We were basking in the girl boss vibes and agreed it was the perfect post-election morale booster. 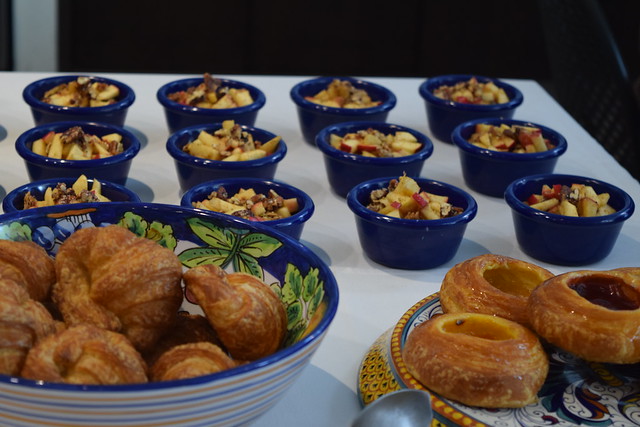 I was late, as is par for the course. After a friendly staff member quickly escorted me upstairs, my jaw dropped. I entered the sun-filled, open air kitchen to find the rest of my group seated and smiling ear to ear. “How cool is this?!” Keara, the birthday girl, mouthed to me as she gestured to a custom sign in the corner that read “Welcome, Bitches! Happy Birthday!” Adorable. 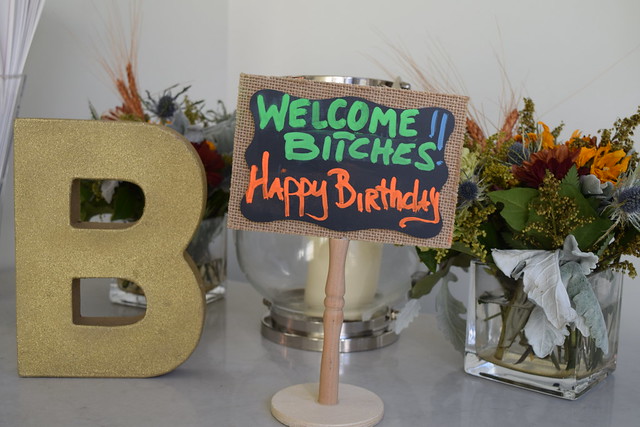 My squad all opted for the Bellinis, so I spiced things up and ordered a Bloody Mary. It was served in a half glass, which I appreciate because Bloodys are hearty and filling, with a cute polka dotted straw. The Bellinis were light and effervescent; they went down easy. 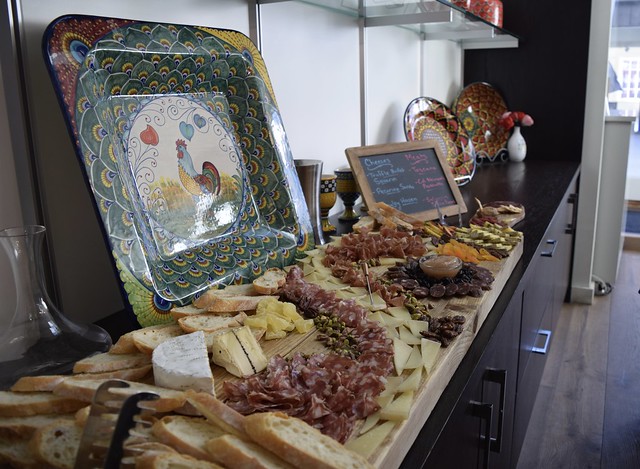 Our culinary adventure kicked-off with assorted pastries, mini apple and granola yogurt parfaits, and a never-ending cheese and charcuterie board from the in-house butcher and cheesemonger. We grabbed our plates and went around the room piling on meats, various cheeses, yogurt, and seasonal grilled veggies. 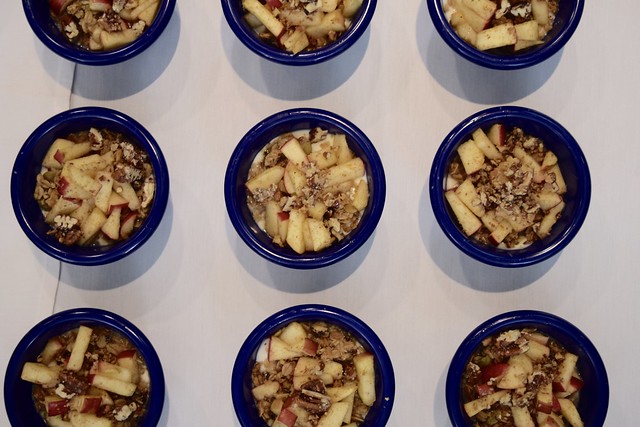 The root vegetables were caramelized, soft, and fresh. We tasted roasted peppers, gorgeous heirloom carrots, squash, and zucchini. Worth noting: all of the food was served on gorgeous Italian ceramic dishes, which we wanted to take home with us by the end of the meal. 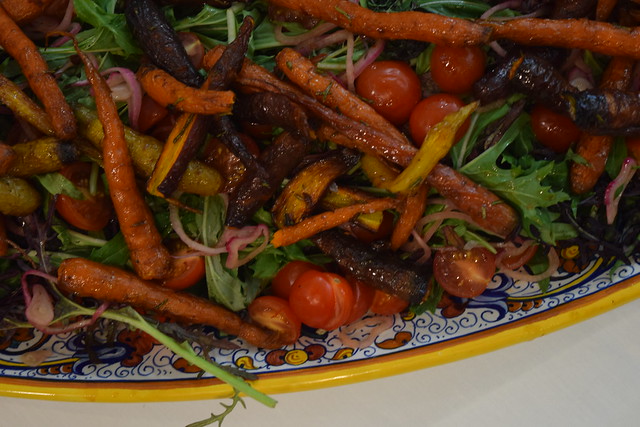 We’re never had pancakes like Via Umbria’s pumpkin mascarpone pancakes. They may not look like anything special, but don’t be fooled. They were seasonal, decadent, and the smoked rosemary sea salt butter was out of this world. The double stack was the perfect portion, as the cakes were dense and each bite flavorful. It was like we were eating a light, gourmet cake for breakfast. 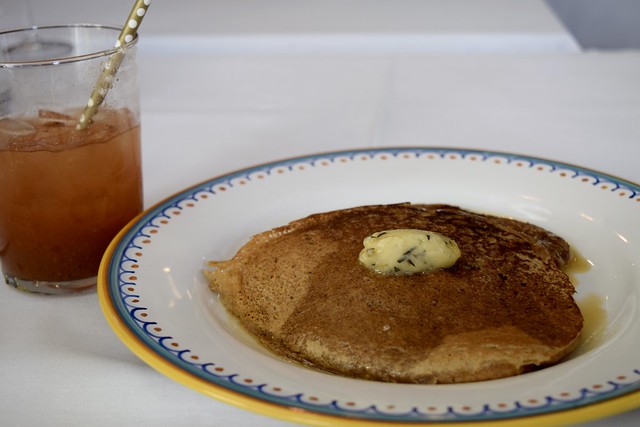 Keara treated herself to the Breakfast Carbonara—it was her birthday after all. The entree was made with bucatini pasta, a crowd favorite for our group, cured egg yolk, and crispy guanciale. It was rich, hearty, and delectable. The crispy pork topping made the dish utterly addicting. I kept eyeing her plate, before eventually migrating my fork over to her bucatini. 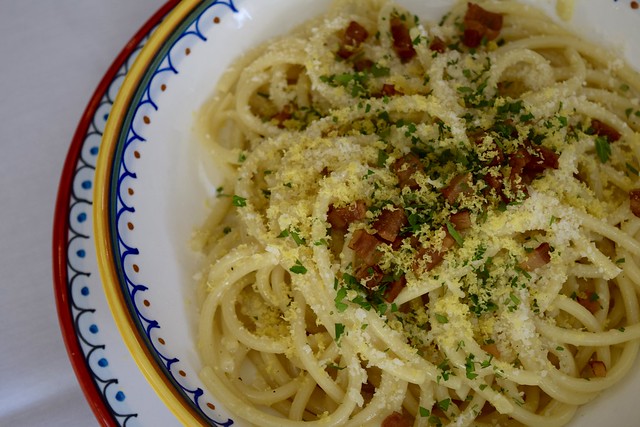 Mara, who is gluten-free, was graciously accommodated by the chef. Perfectly timed with the arrival of the rest of our entrees, she received a plate of Breakfast Carbonara with gluten-free pasta, which we learned is sold in the market. It was lighter, but just as flavorful as the version offered on the menu. 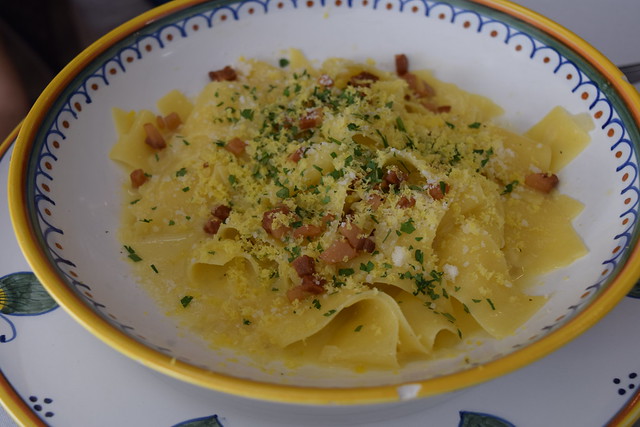 I opted for the breakfast pizzette with tartufata, fontina, and a farm fresh duck egg. I mainly wanted to try a duck egg, which I can report really tastes no different than a chicken egg. However, I did notice the yolk was bigger than your average egg. The oversized yolk was perfect for this dish, because all I wanted to do was rip apart the pizzette and dip it into the egg yolk. The truffle and fontina cheese added a sharp flavor, which was a nice contrast to the fluffy olive oil crust. 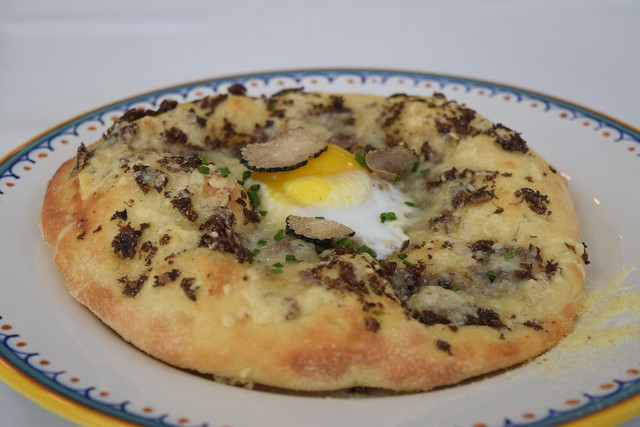 The dessert of the day was Zeppoles, Italian ricotta doughnuts, and chestnut apple fritters. It came with salted caramel chocolate and vanilla mascarpone dipping sauces. The ever-accommodating staff surprised Mara with a gluten-free cardamom ice cream, plated beautifully with edible flower petals. Mara graciously shared and we agreed we would order this dessert, regardless of our dietary restrictions. To make our experience even more special, Keara unexpectedly received a banana cupcake with a birthday candle as she was serenaded by 25 of her new friends. 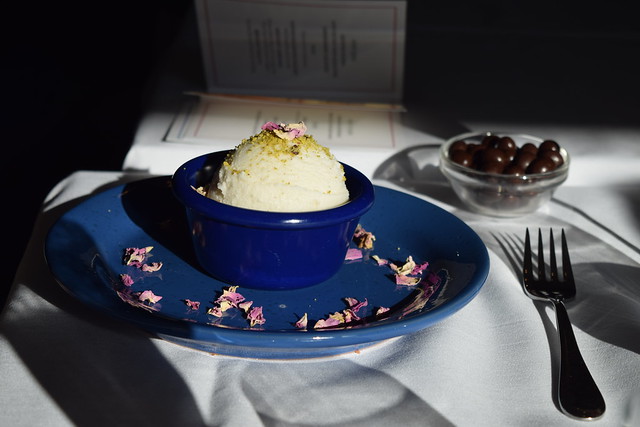 We left happy and content, but not before making our reservations to come back for dinner in a week.

The Bitches say: A-. If you’re looking for a unique, delicious brunch to celebrate a special occasion or simply impress a loved one, treat yourself to brunch at Via Umbria. Space is limited and they only serve brunch on Sunday, but the girl boss staff is talented and accommodating—you won’t be disappointed.