Downtown D.C. – specifically K. Street and the surrounding blocks – isn’t exactly the neighborhood to see and be seen in on weeknights. The same could be said on weekends, as many of those offices aren’t open for business. Via Sophia is looking to change that reputation. 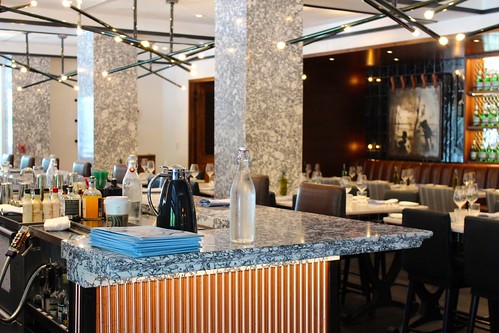 Nestled inside the Hamilton Hotel, this Italian restaurant cooks up Neapolitan pizza and other European classics in a sophisticated, contemporary space. There’s plenty of natural light, ample room, and the decor serves as a perfect backdrop for a first date or meet-the-parents scenario. 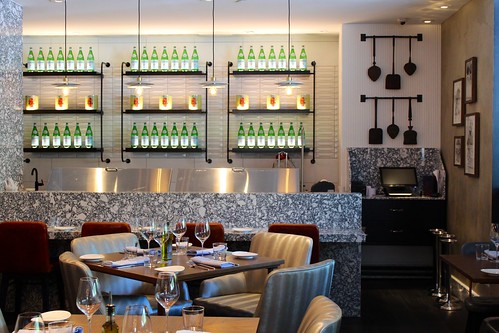 After a long night, my friend Adam and I were looking for a quiet spot away from the party brunch scene. Via Sophia treated us to a pleasant afternoon of doing just that.

One thing you’ll notice about Via Sophia’s brunch menu is the care they’ve put into each cocktail. Adam went with the standard mimosa, which was served in an adorable little glass. I went rogue with a spritzer made with vodka, soda, and topped with a rosemary garnish. 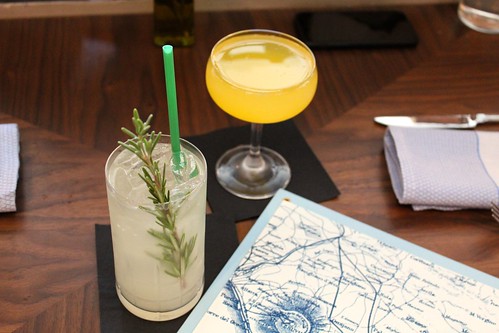 For an oppressively hot day in D.C., this was the exact remedy I needed. It was crisp and the flavors lingered on your lips a little longer than most drinks. The fresh rosemary did not overpower the rest of the ingredients and instead provided a rather woodsy and floral aftertaste.

Our server, Oscar, did an excellent job of guiding us through the menu. Keeping with my recent trend to start brunch with a lighter fare (and avoid gorging on the bread basket before the appetizer arrives), we chose the spring harvest salad as our first course. Composed of favas, strawberries, almonds, asparagus and pecorino on a bed of local greens, we knew that was the perfect starter to our afternoon. Problem is, Via Sophia was out of that particular salad, which dashed all of our brunch appetizer dreams. Oscar suggested an alternative, which was made of local greens, asparagus, shaved radish, edible flowers, goat cheese, and crumbled pistachio all placed on top of a dollop of basil pesto. 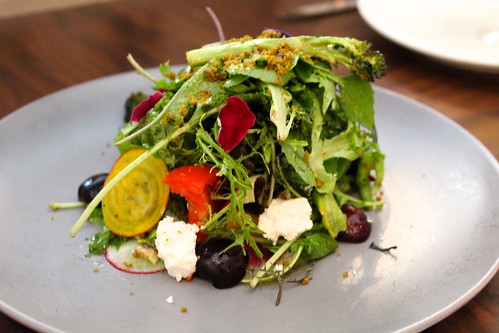 While it wasn’t what out hearts were set on, we were pleasantly surprised with the combination of flavors. Everything tasted fresh and made to order. The goat cheese was thick and crumbly at the same time, and the nutty bite from the pistachio was delightful. We completely blanked on combining everything with the pesto underneath, but we enjoyed the bright flavors of the homemade dressing.

Picking a main dish was easy. My eyes immediately gravitated to the quiche Lorraine. Unfortunately, the chef informed us that also was not available that morning! At this point we were zero for two on our dishes of choice. I went the opposite direction and settled on an Italian dish as my replacement. The bucatini carbonara sounded like a safe choice, and Adam stuck with a classic for his: eggs Benedict. 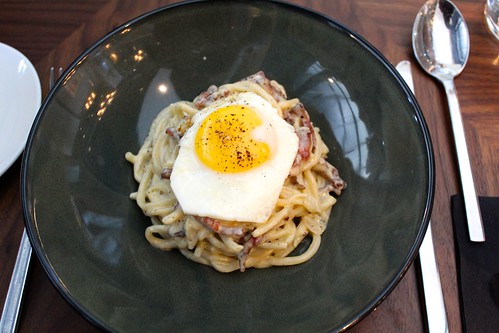 The portion seemed small at first, but it was deceiving. The pasta preparation was the perfectly al dente and was coated in flavor from the creamy sauce. The guanciale added just the right amount of salt – any more would have drowned out the other flavors! 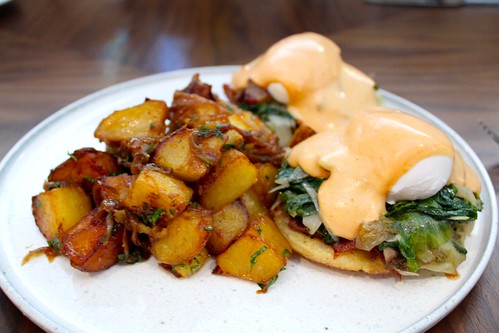 I wish I could give the same praises for the Benedict. The creativity behind infusing tomato in the Hollandaise sauce was clever, but we couldn’t overlook just how salty the entire dish came together. We attributed it to the prosciutto, but we found the potatoes to be doused in more salt than any other flavoring. A few more bites in, we noticed some potatoes were perfectly roasted while others weren’t quite as cooked. For a dish that boasts an Italian variation on such a brunch favorite, there wasn’t much to be desired. 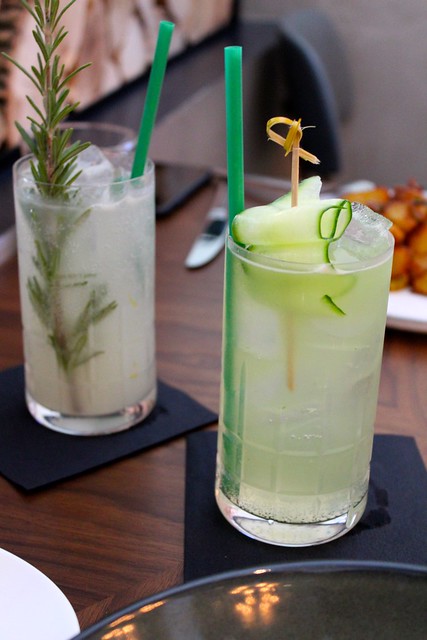 We didn’t want to depart on a salty note, so we went the sweet route and ordered the olive oil cake for dessert. Neither of us had ever tried it, but Oscar twisted our arms with such ease we couldn’t pass it up. With that, we ordered a final cocktail. Adam followed suit with my first drink and I went with the stai fresco: gin, lime juice, cucumber juice and ginger beer. 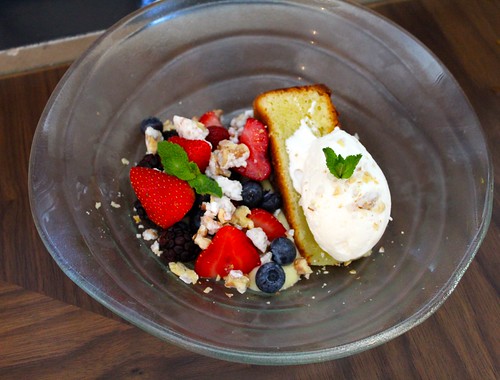 Any underwhelming feelings we had post-entrée dissolved with a few bites of this cake. The faint taste of olive oil made the pastry moist but not dense. The liberal portion of berries and whipped cream made each bite more sensational than the previous one. I’m admittedly new to the trend of olive oil as the main ingredient in dessert. But this has now inspired me to attempt this same loaf at home in my own kitchen. Fingers crossed that it yields similar results.

We loved the ambiance, staff, and the cocktails were heavenly. On our next visit, I hope we can sample our first-choice plates and something more than salt on our Benny.