For weeks prior to my parents’ visit to New York over Easter weekend, my Mom kept nagging me about where we would be going for brunch. “You work for a brunch site now,” she remarked. “You better take us to one of the best places in town!” Feeling the pressure, I racked my brain as to where I could take my parents that would not only be amazing, but also meet all of my mother’s criteria.

I remembered that Danny Meyer-led Union Hospitality Group had recently opened Untitled, a contemporary American restaurant located in the first floor of the new Renzo Piano-designed Whitney Museum building. Having been to both Maialino and Marta—two other Union Hospitality Group (and Bitch-Approved!) spots—I felt confident that I could treat my parents to a nice, upscale brunch at Untitled. Plus, we could check out the Whitney Museum after our meal. Win, win! 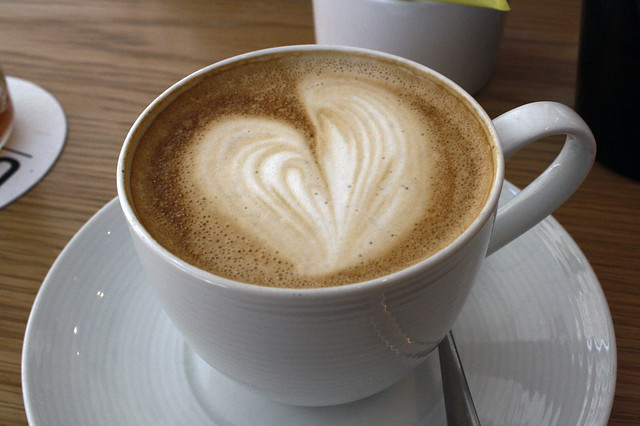 After a chilly walk from the subway, we arrived at Untitled around 11 a.m. We’d made a reservation just in case, but there were a fair amount of open seats and there didn’t appear to be a wait. The space itself is fairly small, nestled into the bottom corner of the museum, but the high ceilings paired with two walls consisting of floor-to-ceiling windows makes the space feel larger than it is. 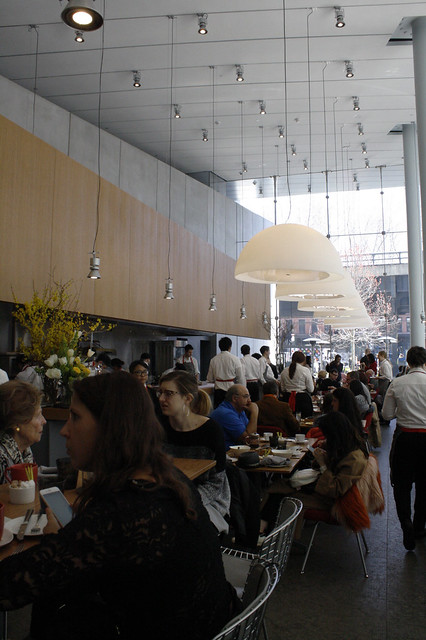 We all loved the contemporary, yet simple decor. The wooden tables were adorned with chic white plates and grey gingham napkins, with bright red, cushy chairs tucked underneath. We were seated at a table right next to the window, and directly across from the open kitchen. It was so fun to watch the chefs work their magic while we waited for our server to arrive. 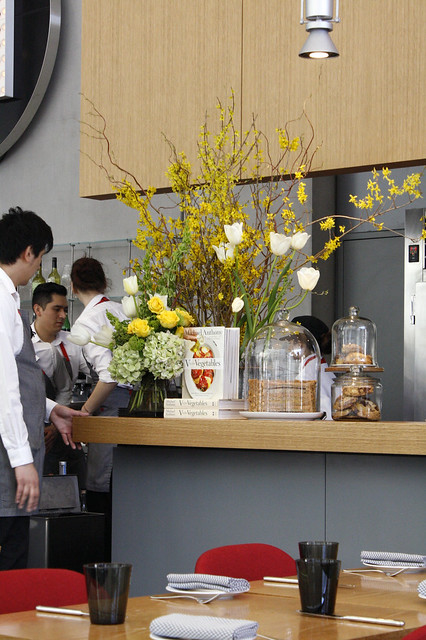 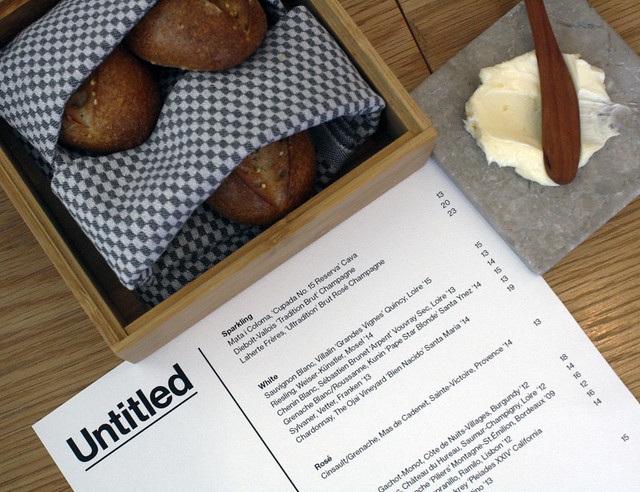 Once we determined who our main server was, I immediately ordered a Bloody Mary. My parents happily followed my lead. We could tell these Bloodys were homemade, with olive juice, fresh horseradish, black pepper, and Old Bay. Normally, I’m not a fan of Old Bay in my cocktails, as it can sometimes be overpowering. But it was on the lighter side in this particular instance, so it didn’t bother me in the slightest. 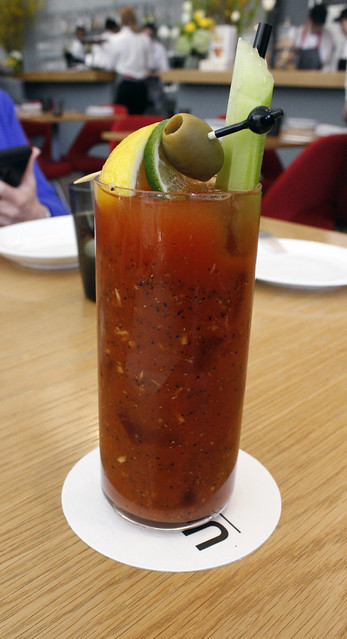 The brunch menu is divided into a few sections: it guides you from smaller, lighter dishes to larger, heavier plates, then ends with dessert options. We ordered a passion fruit cake doughnut and a frittata to start, and decided to split the scallops and pulled pork lettuce wraps for our entrees, plus a side of cauliflower.

To our surprise, the scallops were actually brought to the table first. This dish consisted of seared diver scallops, served atop a leek and almond purée and some sliced grapefruit. 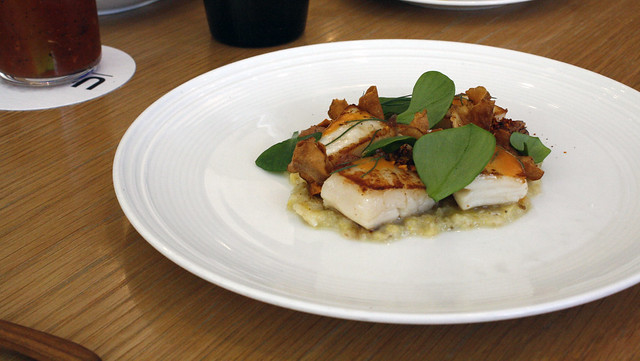 I am a huge fan of scallops, and this dish was absolutely delicious. However, it ended up being the least memorable dish of our brunch, as nothing really made it stand out from your typical seared scallop dish.

The frittata and doughnut arrived at exactly the same time. The doughnut selection at Untitled changes seasonally, but particular day, it was a cake doughnut with a passion fruit glaze, topped with thinly sliced coconut and cocoa nibs. 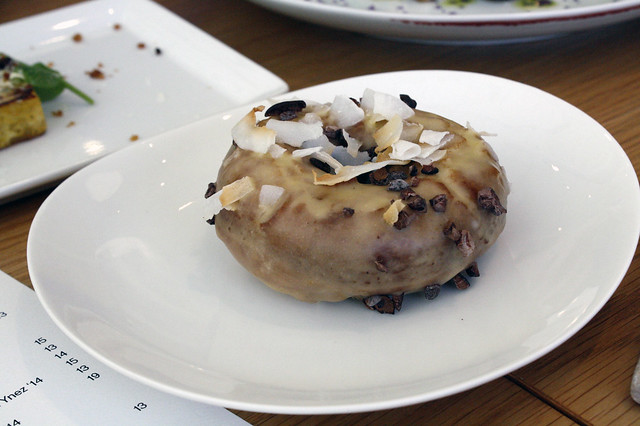 My goodness. Untitled could give some of the most popular doughnut shops in the city a run for their money. This pastry was SO good! The glaze was my favorite part; the citrus undertone perfectly complemented the sweetness of the doughnut itself. 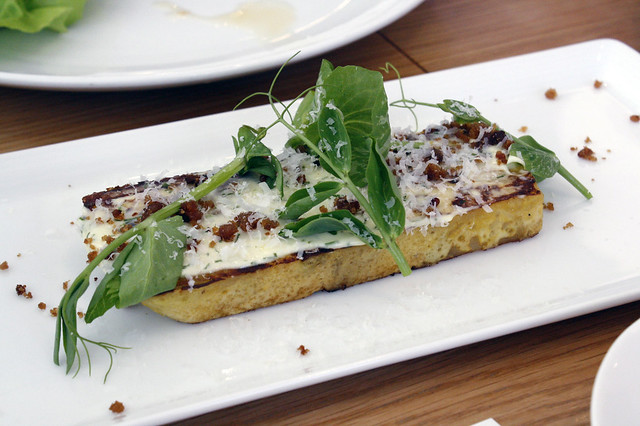 While the frittata, made up of eggs, butterball potatoes, carmelized onion, and bacon, was incredibly tasty, I was a bit disappointed with the portion size. It was maybe a little bigger than the size of my hand, and the three of us were only able to have one bite each. We should have ordered two of these!

The lettuce wraps were my mom and my favorite part of the meal, and also one of the more interesting dishes we tried at Untitled. The pulled pork was tossed in a peanut miso sauce, served inside baby butter lettuce cups, and topped with jumbo fried oysters. 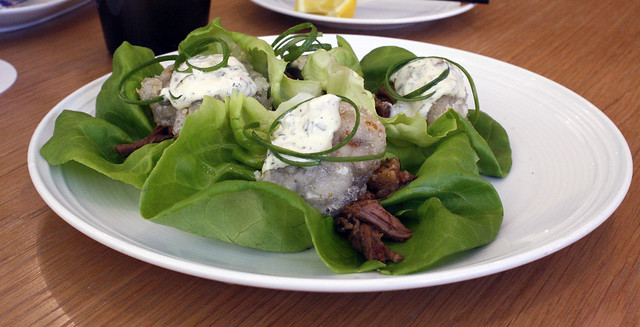 These weren’t your average fried oysters. Rather than being fried to death in your usual buttermilk-based batter, they were only lightly fried to the point where the batter was translucent, and you could see the oyster through the batter. In addition, the batter had an almost-jelly like consistency. The lettuce wraps were drizzled with what tasted like a yogurt-based sauce that provided a hint of heat. They were incredibly tasty! 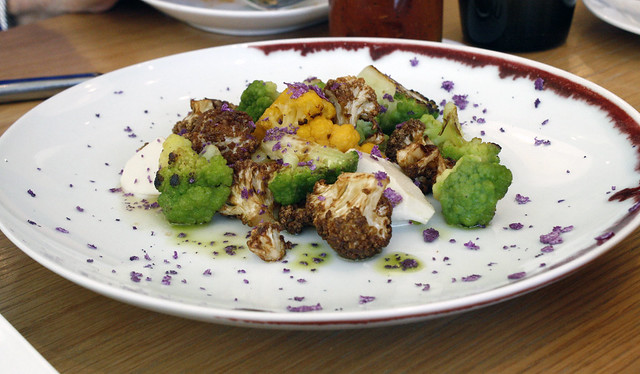 We also shared a side of cauliflower, served with a cardamom custard and drizzled with lemon juice. I loved that this dish featured multi-colored cauliflower, which I rarely see in restaurants. It was so colorful and beautiful to look at, I almost felt bad eating it.

Purple cauliflower had even been minced into incredibly small pieces, and scattered on top of the rest of the vegetables. The cardamom custard was such an innovative addition. I’ve never tasted anything like it! It had such a creamy texture, and looked so plain, but offered such a burst of flavor. 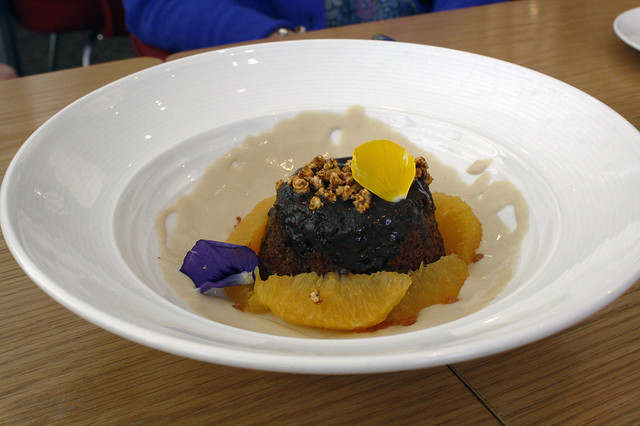 Since we split everything we ordered, we were still kind of hungry and opted to share dessert. We couldn’t decide between the sticky toffee cake and the banana cake with hazelnut brittle and concord grape sauce. Our server mentioned that the sticky toffee cake was her personal favorite, so we went with that. 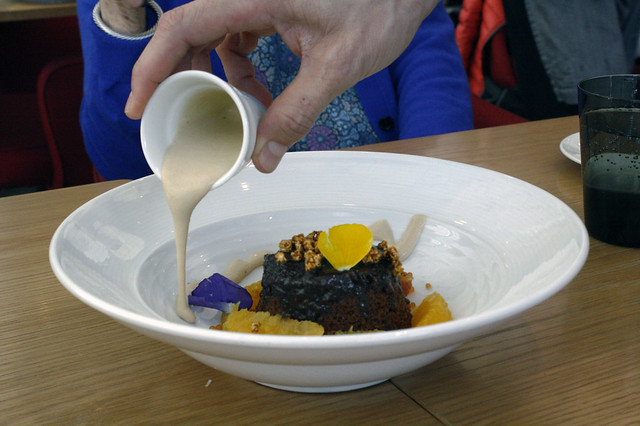 Served with sliced oranges and topped with bits of toffee, this cake was drizzled table side with an Earl Grey sauce and was absolutely delicious! It was incredibly moist, yet not too rich. The Earl Grey sauce was subtle, but the orange slices helped to bring out the citrus rinds that the tea is traditionally flavored with. I can’t wait to go back to try this dessert, plus everything else we ordered, one more time! 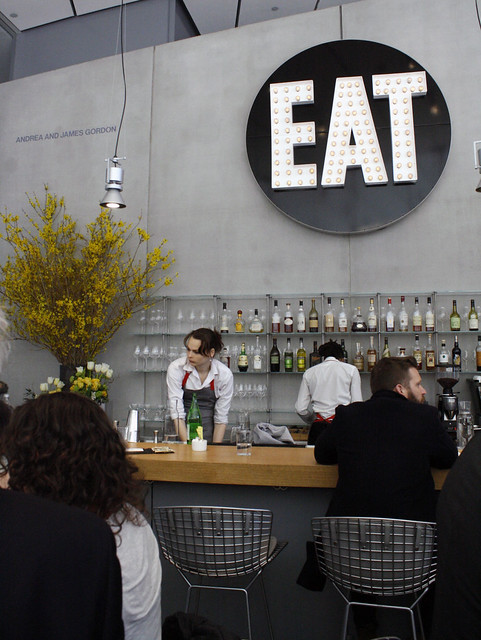 The Bitches say: A-. Brunch at Untitled was an absolute dream. The food is superb, and we loved the contemporary vibe. However, we would have appreciated a bit larger portions and a smaller number of servers.

One thought on “Untitled at The Whitney Brunch”

Untitled at The Whitney