If you don’t know, I live in the Ukrainian Village neighborhood of Chicago. It is just West of Wicker and West Town, and it goes without saying that I am a huge fan of my neighborhood. There is something about the fact that I can walk to my doctor, florist, dentist, all of whom are Ukrainian or Eastern European, by the way, and support the small and wonderful businesses that occupy this district. While the neighborhood is diverse, it is really cool to see a lot of the businesses only have signage in Ukrainian. I love the community of the UKV as the locals call it, and it is cool to experience another culture in your own environment. 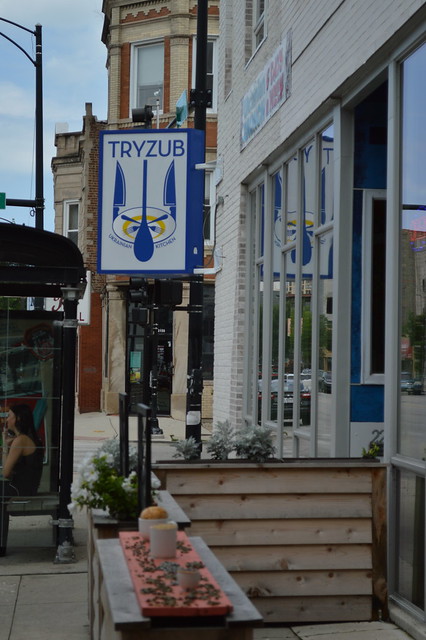 Additionally, there are some fabulous restaurants, of all different cuisines that are worthy of checking out in the neighborhood. About a year ago, a new space opened on the corner of Chicago Avenue in the heart of the UKV. It was a beautiful space, and the new restaurant looked modern and cool.  When it opened, we then discovered it was a Ukrainian Restaurant. Tryzub had officially arrived in the neighborhood. The husband and I were intrigued and had planned on checking it out, but before we knew it a year had flown by and we still had not stopped in. 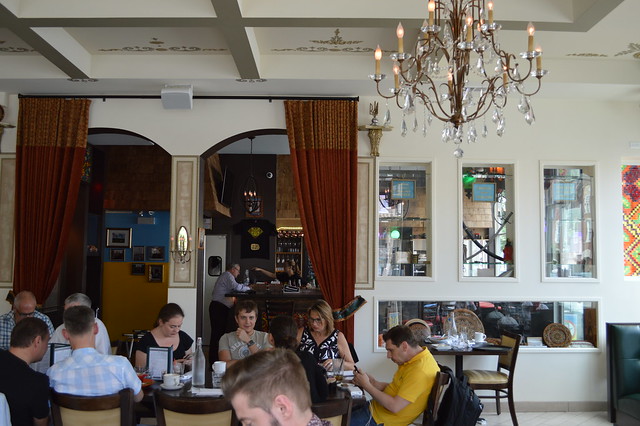 With a large sign hanging above their street front entrance that reads “Serving Ukrainian Brunch 6 Days A Week!”, Chris and I knew that we had to try this place, and finally decided to give it a go. I love pierogis, and am trying to become more familiar with Eastern European food, as one of my best friends here in Chicago is Russian and has made me explore the cuisine more than I ever have. Chris and I were excited to be adventurous and try a traditional Ukrainian Brunch. 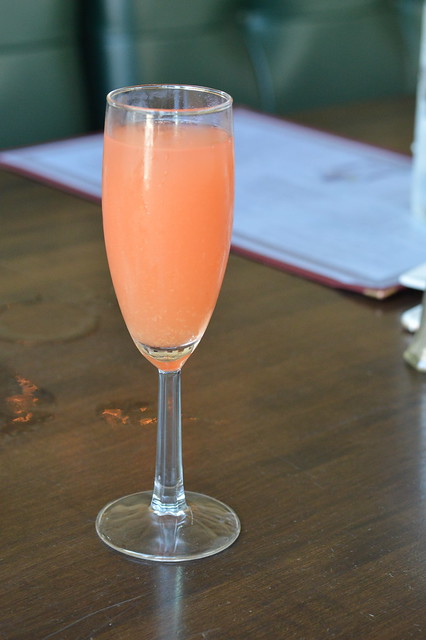 The restaurant itself is a vibrant, lively spot. There is a large patio outside with hanging lights and plants, the perfect for enjoying summer cocktails on the weekend. Inside the space is stylish;  there are high ceilings with gorgeous chandeliers, gold accents, and Ukrainian paintings and imagery to represent the authenticity of the restaurant. It certainly feels like you have stepped out of Chicago when walking in. While there were patrons of all different ethnicities, there was a strong presence of Ukrainians, with the few large family gatherings, and people laughing and chatting away in their native tongue. 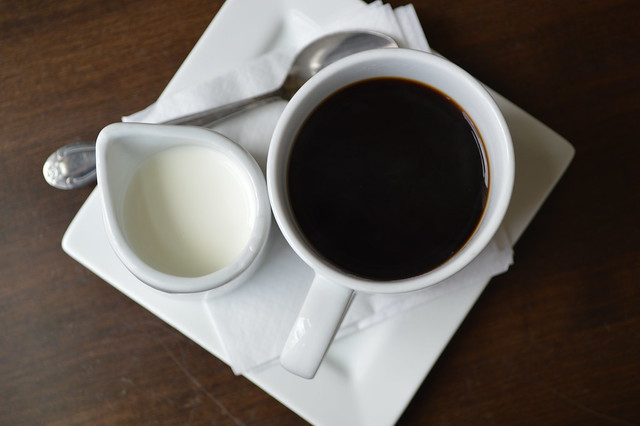 Our cute, young and I imagine Ukrainian server greeted us and handed us both menus. I was initially intimidated by the menu items upon seeing that they were all in Ukrainian. Thankfully, there were descriptions of each item in English below. Chris ordered a coffee and I ordered a mimosa.We decided to enjoy a couple of starters, and then order two brunch items to share. There was no chance us of not ordering pierogis. Tryzub’s Ukrainian-style pierogi’s are handmade daily in the kitchen. There is even an outside food-service counter where you can peek inside and see the kitchen staff making them. 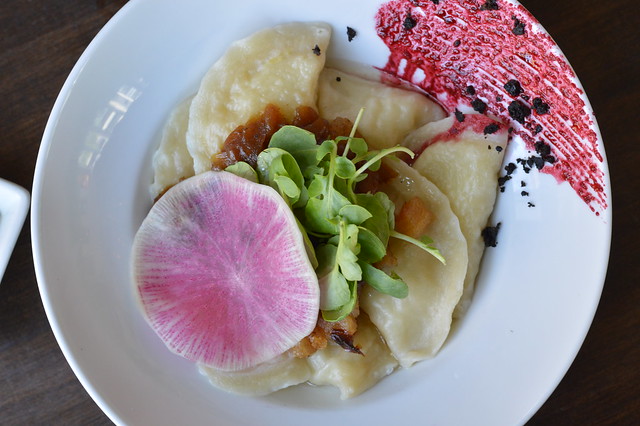 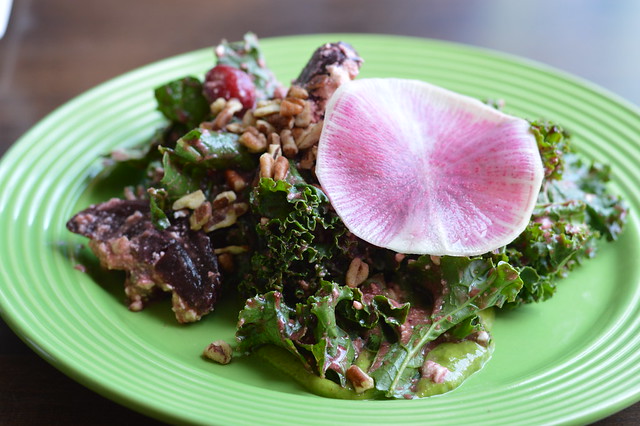 We also ordered a kale salad, made with kale, roasted beets, heirloom tomatoes, bryndza and walnuts. I love a good kale salad, and this one was unique and delicious, although it was a little heavy on the dressing. And by little, I mean a lot. The kale leaves were drenched in the thick and creamy dressing, and while it tasted delicious, I could have done with about half of the amount. 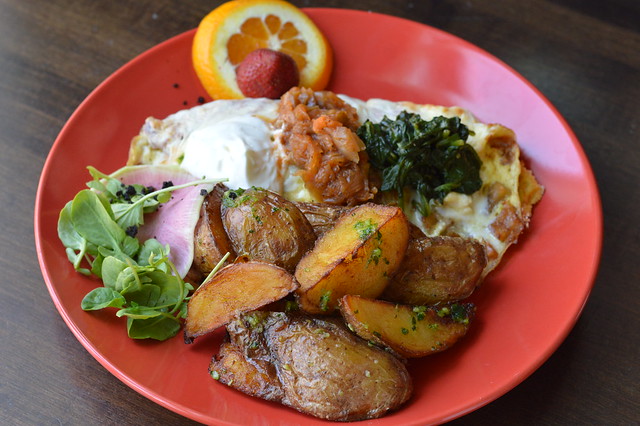 For entrees, Chris decided to order the Village omelette, made with pork belly, farmers cheese and onions. He was delighted when his plate arrived to table and there was a generous portion of food. The omelette was large, and topped with greens and some kind of salsa, and there were fresh fruit and potatoes on the side. 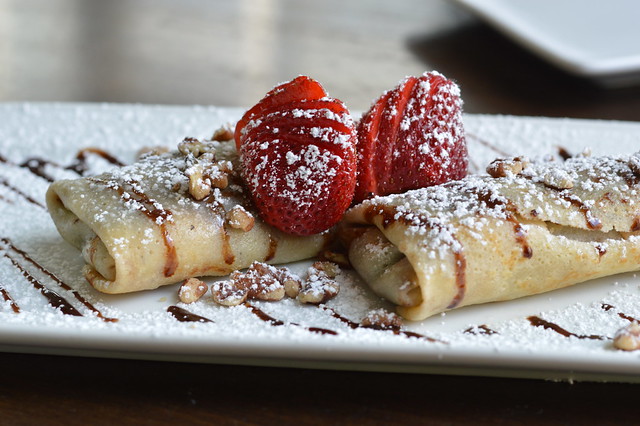 I opted for the crepes, an obvious choice, considering this is a specialty of the restaurant and I just love crepes… who doesn’t? After having a few savory dishes, I knew I wanted something sweet to finish the meal, so I went for the Nutella and banana crepes.  By the time they arrived to the table, I was beginning to feel full, but being the fearless bruncher I am, I powered through. They were delicious and worthy of the extra calories. The crepes were thin and delicately packed with the hazelnut spread and bananas. 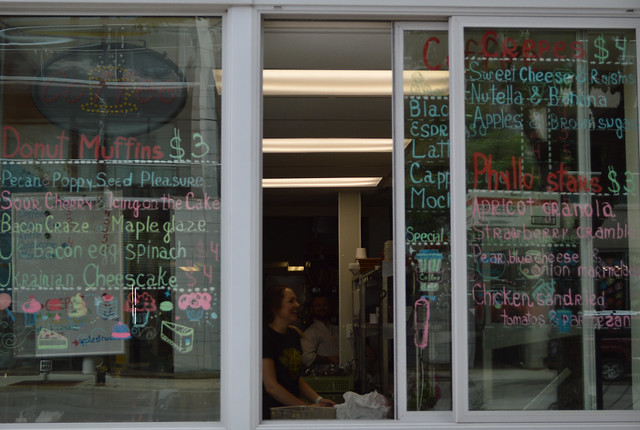 If you live in the UKV, you have definitely seen Tryzub and the large brunch sign that hangs facing the street. If you have been wondering what this place is like, I definitely encourage you to check it out. The restaurant is lively, vibrant and fun, the staff are friendly, and the food is great. Don’t be intimidated by the fact that it is Ukrainian fare if you are not familiar; the restaurants menu reflects Ukrainian cuisine with an updated modern twist, and there is definitely something for everyone, including non-adventurous eaters. You will get to enjoy the culture and feel transported out of Chicago for a moment, and additionally learn a bit of history during your visit, thanks to the run-down of “Famous Dates in Ukrainian History” found on the front of the menu.

The Bitches say B+.  The brunch menu is not extensive, but the Ukrainian brunch at Tryzub is certainly worthy of checking out. The space is unique, and the culture and heritage of the Ukraine is something everyone should experience. Additionally the quick-service coffee counter is great for weekday morning coffee and a quick bite. Ypa! Or, “Cheers” in Ukrainian!

Tryzub Ukrainian Kitchen serves brunch every day except for Monday.