Nestled in the renovated Ballston Quarter in Arlington is True Food Kitchen, a well-known restaurant with a reputation for colorful plates and fresh-squeezed juices. Fellow Bitches know that this national chain prides itself on signature beverages and meals that accommodate just about any dietary restriction from paleo to keto. After a quick trip celebrating my future sister-in-law’s bridal shower, I was ready to jumpstart a week of clean(-ish) eating with a visit to their newest Arlington location. 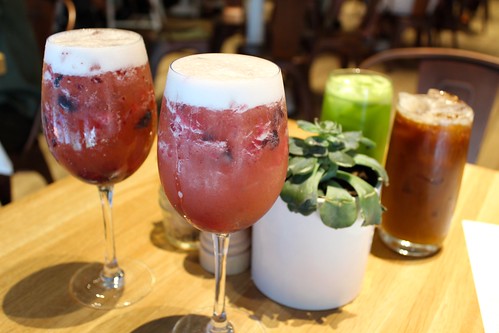 We were seated in their open-air dining room, bursting with the pleasant smells of baked goods and fresh-out-the-oven pizza. I needed something with caffeine, so I ordered the Cascara Cold Brew to start, and my guest Kelly went with the popular Kale Aid. As for libations, the rosé sangria was instantly calling both our names. If you’re looking for a refreshing cocktail to drink during these uncomfortable temperatures, this sangria should be at the top of your list. The pineapple aftertaste is a delight because it brings a subtle tartness to the slightly sweet organic wine.

True Food’s menu might seem overwhelming at first, but the culinary team has developed a diverse spread that caters to almost anyone’s cravings. We were informed of several best-selling plates by both the general manager and our wonderful server, and we capitalized on their suggestions by settling on the edamame dumplings. 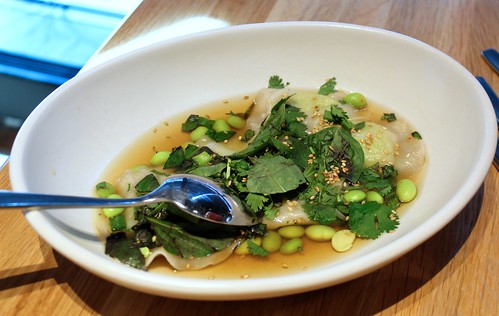 The aroma of the white truffle oil is the first thing I gathered from the plate, and the vibrant green herbs cued a reaction of glee. The filling inside is ridiculously light, and when paired with the slightly tender edamame, it’s an interesting combination of textures with each bite. The dumplings are rather large but won’t leave you feeling full as you await the entrée. Our only feedback about our appetizer was that the herbs weren’t minced as finely as we would have preferred.

The greatest of brunch struggles is deciding on savory versus sweet. While I wanted nothing more than to polish off a plate of their blueberry pancakes, the Korean noodle bowl was also calling my name. Plus, it’s a seasonal highlight, so I definitely wanted to try it before it potentially leaves the menu. Kelly went with the grilled fish taco. 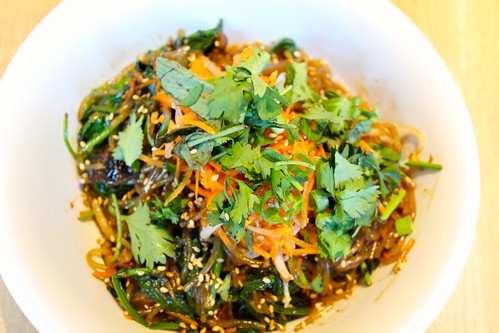 Let’s just say, I wish I could be eating this all over again as I write this review. Everything about this plate was extraordinary. I’d never had glass noodles before and now True Food has set the standard for what I’m expecting should I order them from another restaurant. Everything is made fresh, which really contributes to the overall presentation of the plate. The colors of the pickled shiitake and heirloom carrots were vivid, and the toasted sesame added a playful crunch without being a major distraction in taste. 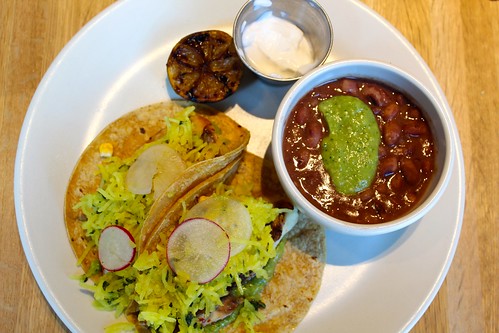 Kelly felt the same about her tacos, although she did remark that the chefs were a little too liberal with the pickled jicama slaw. Still, it didn’t overshadow the tender fish. Beans can make or break any meal as a side, and in this case, they were a great addition to an already satisfying meal.

We made a last-minute decision to order dessert, and I’m so glad we did. True Food’s flourless chocolate cake is one of the best I’ve ever had, and that’s probably because of the house-made vanilla ice cream scooped on top. It was like eating a molten lava cake but lighter and without the feeling that it’s possibly still raw. Another feature that separates this dessert from others is the addition of cacao nibs, which yields a somewhat bitter taste with each chew. 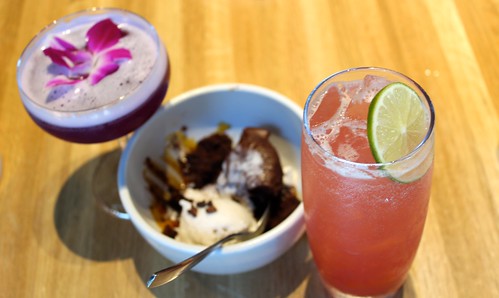 We also decided if we were going to stay for dessert, we might as well order another cocktail. A fan of lavender, Kelly asked for the blueberry lavender martini, while I opted for the watermelon mojito. Much like my noodle bowl, I wish I were sipping this as I write this review. It’s safe to say, I will definitely be going back to experience this meal again!

Between the cocktails and the fresh food, True Foods has already solidified itself as one of Arlington’s most sought after eateries.