I’ve walked by the St. Gregory Hotel, located on 20th and M, hundreds of times during my seven years in Washington. The hotel looks nice, but I’m not wild about Foggy Bottom, and I’ve got no reason to pay a visit to a local hotel.

Unlike the W Hotel, the Jefferson, or the Tabard Inn, the St. Gregory is not a destination for D.C. locals—until now. The Hotel is working to change that, upgrading its decor and its restaurant, with the opening of Tredici Enoteca. I’d heard buzz from industry friends about the Veuve Clicquot brunch at Tredici, and coincidentally received an invite to give it a review. I booked a reservation for two, and invited my lovely friend Ashley, who recently celebrated a birthday and joined the 30, flirty, and fun club.

We walked into the St. Gregory, which has vintage library elements, blended with glam, gilded modern decor. It’s an interesting, dark, and glamorous ambiance and it works well for the space. Tredici is quite literally in the lobby—we were seated on an elevated platform not far from the door. Somehow, they made this work so that it was not off-putting.

Upon entrance, we took note of the great, and rather loud, music, which we thought was the radio. It was, in fact, a stunning young lady, on the piano, who would give Adele a run for her money. Her acoustic, live renditions of songs by current female pop vocalists was beyond impressive and kept us entertained between our courses.

We were seated and promptly greeted by our friendly waitress, Cat. Cat was competent and lovely, swiftly whisking over two cappuccinos within minutes of our request. The cappuccinos were frothy and warm—topped with sprinkled cinnamon that really added a lovely flavor. 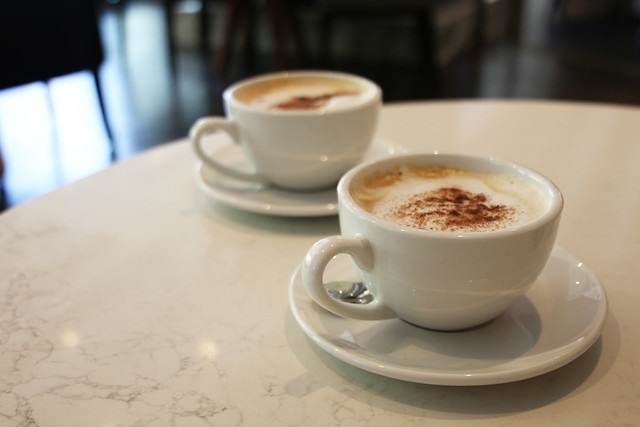 We ordered a round of cocktails: Ashley selected the Bellini, made with fresh peach puree and Prosecco, while I went with the sangria, a boozy, white sangria served in a tall glass, on ice, with macerated fruit. My sangria was spectacular—they do a great, classic brunch cocktail at Tredici. 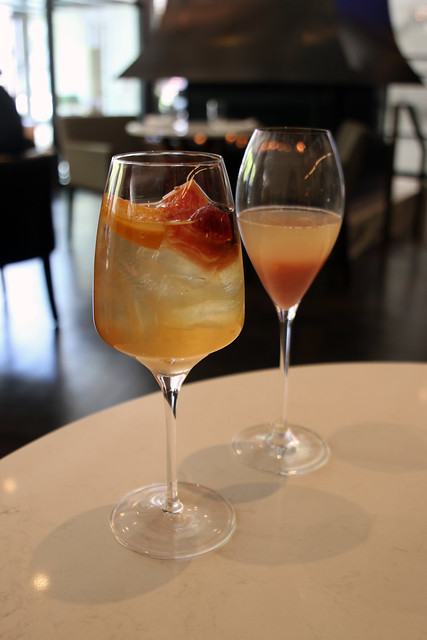 Ashley, my token vegetarian, really wanted the Tredici potatoes, a roasted side of potatoes served with onions and Shisito peppers, her favorite. We ordered a side dish to whet our palates and satiate our hunger as we decided on our plan of action. 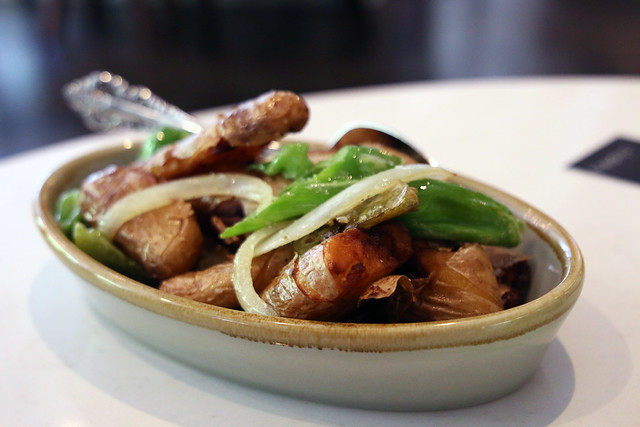 We would later discover these potatoes were served as a side on many of the brunch dishes, so we were a bit over-loaded on the potatoes. 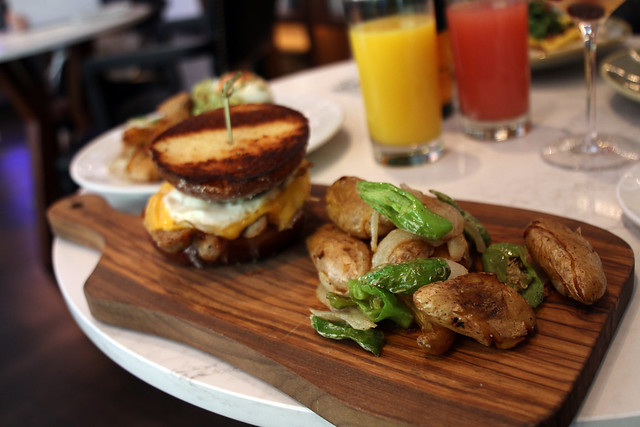 We began with the avocado toast, which was in fact guacamole toast. I am odd in that I prefer sliced avocado to guacamole, so this rather annoyed me. Ashley didn’t seem to mind. The bread was oh-so-thick and fluffy, topped with lots of guacamole, chives, shallots, sliced radishes, and a poached egg. The dishes at Tredici come in large portions and are great for sharing. 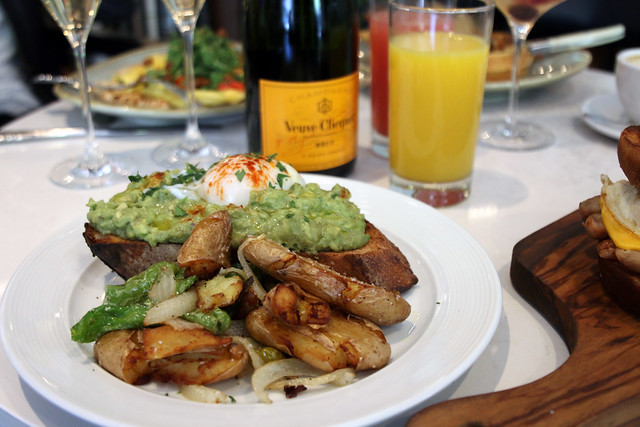 Ashley chose the Moroccan egg scramble, which we expected to be served in a cast iron pan like Shakshuka, which is also available at this Italian restaurant. The eggs were scrambled with arugula, red pepper, chick peas, and cilantro, and served atop a fluffy white flatbread that was pretty much pita bread. This is an excellent dish for vegetarians—hearty and healthy. Ashley said it was fine, but lacked any award-winning flavor. After one look and one bite, I was in agreement. 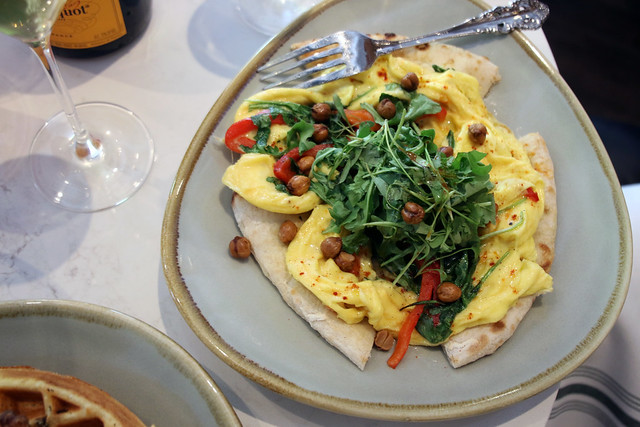 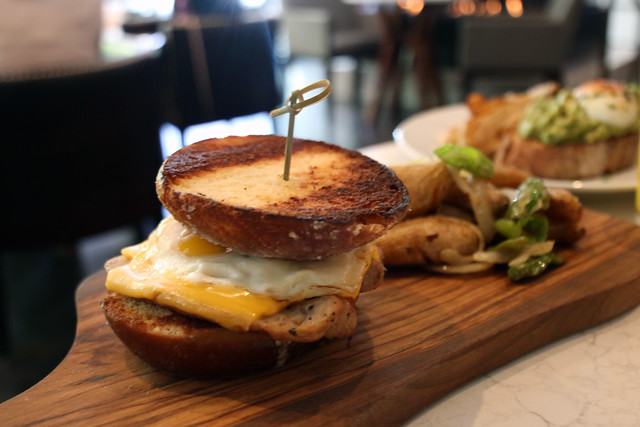 I’m pleased to report that my chosen entree, the fried chicken and waffles, was the winner-winner-chicken-dinner on the table. The rosemary-flavored waffle was topped with sizable portions of delicious fried chicken, and covered in the appropriate amount of maple sausage gravy. While I don’t normally love gravy, this sausage gravy was hearty and sweet, and added a lot of flavor to the dish. It was really quite delicious—and on par with other great chicken and waffles I’ve enjoyed in my years of brunch. 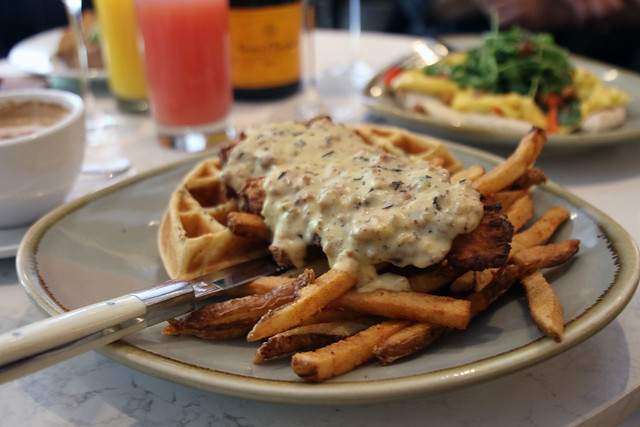 Sadly, this was really the only dish of our brunch entrees that had any memorable flavor.

Not ones to give up on a good time, we decided to order a bottle of Veuve Clicquot, one of the strong sells at brunch: bottles of Veuve are $45 for Brut and $55 for rosé. It’s a solid deal en lieu of bottomless, and the restaurant will provide fresh orange juice and peach puree. 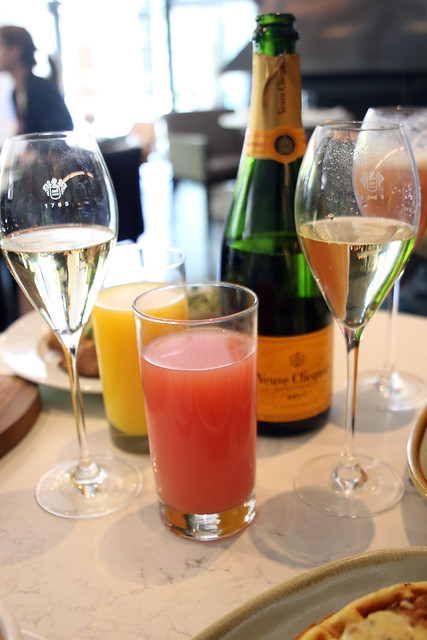 We concluded with the tiramisu, selecting that over a chocolate option. Served in a mason jar, the dense and fluffy tiramisu was perfectly executed in the classic style: moist lady fingers, lots of fluffy mascarpone creamy, sweetness, and layers of cocoa powder. It was topped with sea salt, which added a delightful dimension. 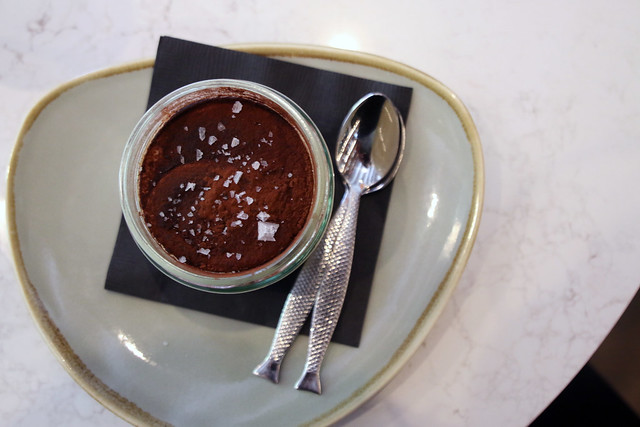 We both agreed that the dessert and cocktails were the selling points about the food at this brunch—it’s a good thing Bitches love both.

We were very taken by the lovely singer’s soulful renditions of Adele and other romantic tunes. A few cocktails deep, we both starting crying during Miley Cyrus’ “Wrecking Ball” as we spooned tiramisu into our mouths. This, as it turns out, is 30.

The Bitches say: B. You can’t go wrong with a great deal on Veuve Clicquot, set to incredible live music in beautiful space with friendly, competent service. That said, the food varied between solidly average and passably good, so we’d work on a few of the dishes.