If there’s ever a reason to brave the crowds at the Wharf, brunch is at the top of our list. Mi Vida, Officina, and Hank’s have some of our most beloved spaces and food offerings. New to the options is Tiki TNT, a rum distillery serving up Hawaiian foods and a beach oasis atmosphere.

There are no reservations at Tiki TNT, but there are plenty of tables and bar seating for the taking. We especially love the views of The Wharf from the open-air deck. They have a unique brunch menu on the weekends, but the regular menu is always available during brunch hours. 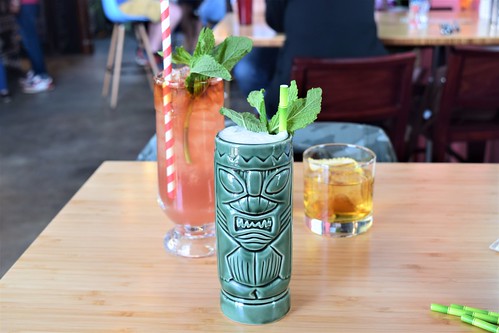 To start off the rum experience, we ordered the most popular drinks on the menu: the colonel T, the Zombie, and the feel better & get well. The colonel T tasted like a tropical lemonade and was playfully presented in a tall tiki mug. The Zombie was the strongest—similar to a Long Island iced tea, in that it was dangerously easy to consume. The feel better & get well as a rum version of an Old Fashioned. Whiskey skeptics may enjoy this drink, but I think a whiskey connoisseur would be slightly underwhelmed.

We realized this establishment was fast-paced, and heavy on the alcohol, making our expectations for food slightly skeptical. We ordered items off of the brunch-focused menu and the all-day menu. We started with the Trystan’s Dip, followed by Tiki Hash, chicken flatbread, poke, pork buns, and spam musubi. 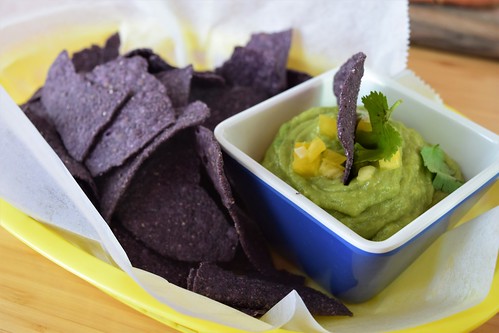 One of the many things that scream summer is chips and guacamole. Trystan’s Dip is essentially just that, but with pineapple. This didn’t taste like the refreshing, chunky, salty, avocado mixture we want out of a chip-scooping situation. 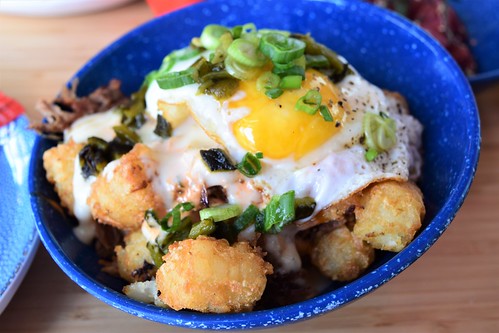 The Tiki Hash is a unique, “will travel for” item. Crispy tots smothered in barbecue pulled pork, crunchy scallions, and a fried egg, make this the complete brunch indulgence. The hash is rich but just right for sharing.

The chicken flatbread sort of reminded us of a bbq chicken pizza from CPK, but not in the best way. The bread had a bit too much chew and the cheese was stiff. The salty, garlicky, oniony flavors were spot on for a tiki party, though. 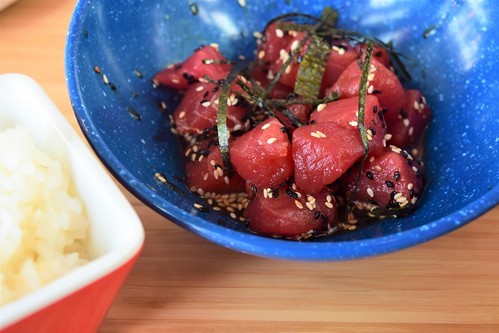 We were ready for some freshness to hit our palates. The poke arrived and I instantly knew I would be sated. The tuna poke comes straight from the wharf and is mouthwateringly sweet and clean tasting.

The Spam Musubi and pork buns were more unique items on the menu. The Spam Musubi was quoted by the chef to be consumed “five days a week”— we had high expectations. The Spam was slightly sweetened, and its densely preservative qualities were evident, but this was oddly satisfying against the chewy, vinegar-dressed rice and nori sheets. 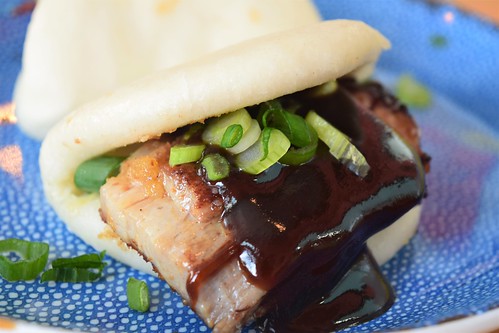 The pork buns are another must order. The buns were fluffy and not overly dough, and the pork was succulent and chewy, without being overburdened by fat. It also didn’t hurt that the most flavorful Asian barbecue sauce was slathered on top.

Whether that Zombie hits you harder than you’d like to or not, you’ll definitely be satisfied with the food offerings at Tiki TNT. After brunching, I understand the TNT component. This slightly atomic brunch comes with a warning: you’ll just need to be in a mood to socialize, push your way through a crowd, and consume an abundance of water afterwards.

The Bitches say: four Champagne (or maybe rum?) flutes for Tiki TNT. We’ll be back, but we’ll brace ourselves first.