January is literally the Monday of months. The bomb cyclone and blustery temperatures haven’t carved out an optimal start to 2018.  Nonetheless, a new year still means a year full of exciting adventures and cocktails to be had. While pop-up ski chalets are becoming a seasonal staple for bars, the Lodge at Gallow Green is anything but your basic ski Bitch’s retreat. We’re fans of the rooftop brunch in the summer months. 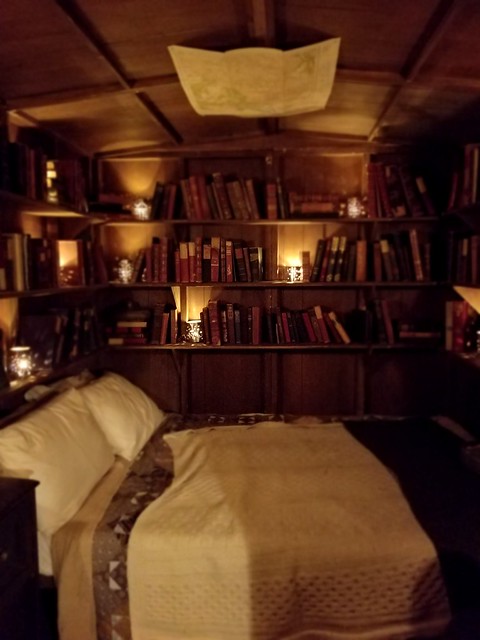 The Lodge at Gallow Green is an adorable rooftop hideaway bar and restaurant at The McKittrick Hotel in Chelsea. While it’s known for its gorgeous walkway and famed greenery during the warmer months, it’s transformed into a cute and cozy lodge for the colder months. Imagine walking into a mountainside ski cabin nestled in a sea of pine trees.  The lodge is inspired by Scottish bothies and equipped with fireside seating and plaid blankets complete with sleeping bunks and a library. There isn’t a single detail to be missed between the wooden chairs, cable knit linens, hand-written letters, and photographs. The lodge also includes an outdoor fire pit and mysterious train tracks leading to a bar. 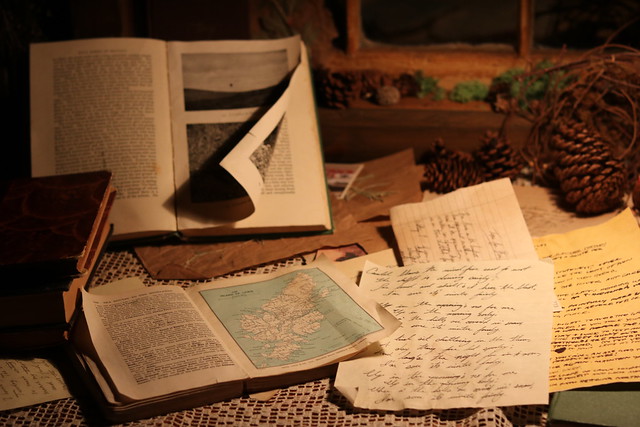 The immersive dinner experience and shows are the main event at The McKittrick Hotel. The cocktails at the Lodge are all inspired by either Sleep No More or At The Illusionist’s Table, the two performances offered. The team at Gallow Green is clearly doing something right. There’s something to be said when Sleep No More, an-award winning theatrical experience that tells Shakespeare’s Scottish tragedy is sold out every night even after a six year run. 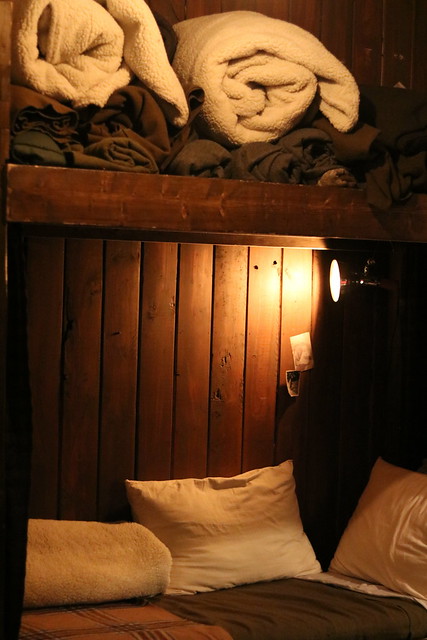 The Lodge at Gallow Green is the ideal place for a date. While still a suitable spot to catch up with friends, the cute and oh so cozy vibes make it even more enticing to bring a hot date. There’s plenty of conversation to be had surrounding the detailed decor over cocktails, shared small plates, and wood-fired pizzas. My darling cousin Ami joined me for the evening as we filled each other in on our respective New Year’s Eve excursions.

We were treated to cabin-side cocktails in the private adjoining space leading into the library. Seeking relief from the crisp temperatures, we decided to warm up with hot drinks. If there’s a shortage of anything (other than successful single men) in New York City, it’s delicious winter cocktails served warm. 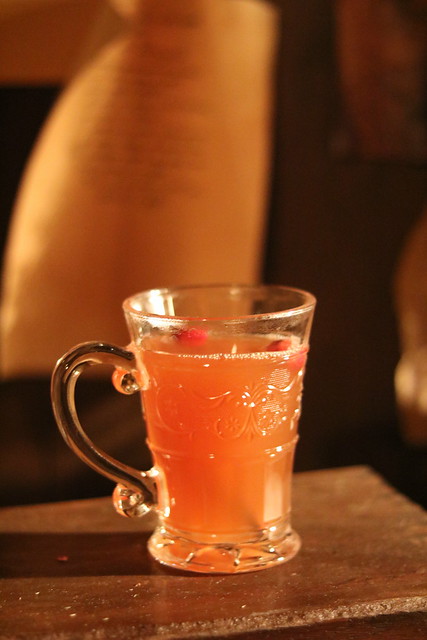 I decided to go for the Sleep No More cocktail as it’s the namesake from the show. The bright orange cocktail is served in mug and tasted even more delightful. The rye cocktail calls for apple cider and Amaro montenegro combined with three of my favorite seasonal flavors, ginger, cinnamon and fresh cranberries of course. 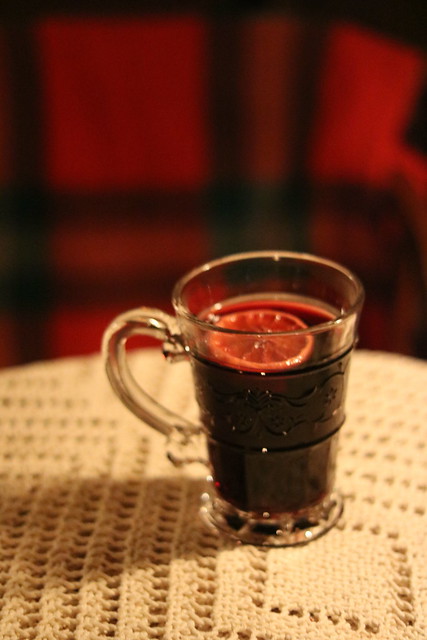 Red wine and Ami go together hand in hand. Ami was drawn to the Smoking Bishop cocktail with ruby port, red wine, CioCiaro Amaro and allspice. She especially liked the hint of sweetness the honey liqueur provided against the flavor from the allspice. The Dickensian-era holiday punch is garnished with a dried orange wheel adding citrus notes.

With a name like Witch’s Piss, what’s not to be intrigued about. The Witch’s Piss is a hot tea lover’s dream with Toki Whiskey, white tea, Strega, lime juice, and honey. The tea cocktail is adorned with rock candy for a whimsical element. 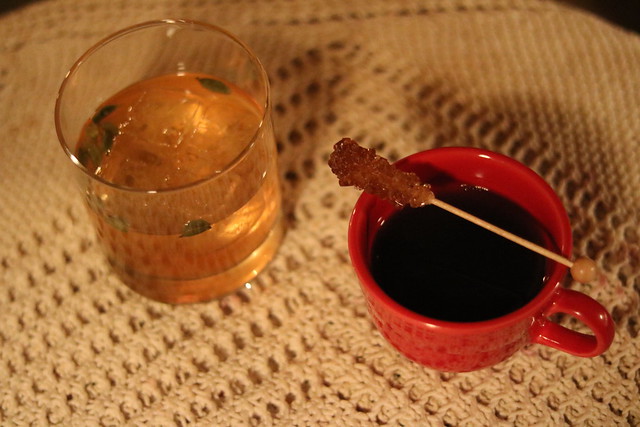 Ami decided to switch it up and decided to try a Birnam Lowball, a cold chai tea cocktail made with Brugal Añejo rum, and teapot bitters. Being Indian, we’re no strangers to chai or cardamom but the green cardamom pods were a surprising twist. 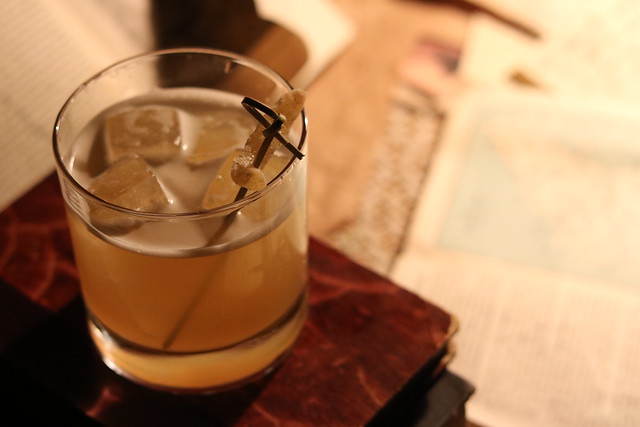 At this point we needed to nosh on something and split a Margherita pizza and roasted pumpkin salad with stracciatella cheese, both of which we highly recommend. For a nightcap, the Flight of the Illusionist seemed like a good choice as it plays an homage to the other performance in the Health downstairs. You might want to shy away from this cocktail if Scotch isn’t your spirit of choice as the cocktail is not only prepared with Scotch but also sprayed with it. The smoky libation calls for Glenlivet Founders Reserve, a mist of Glenlivet Nadurra, honey, lemon juice and garnished with candied ginger. 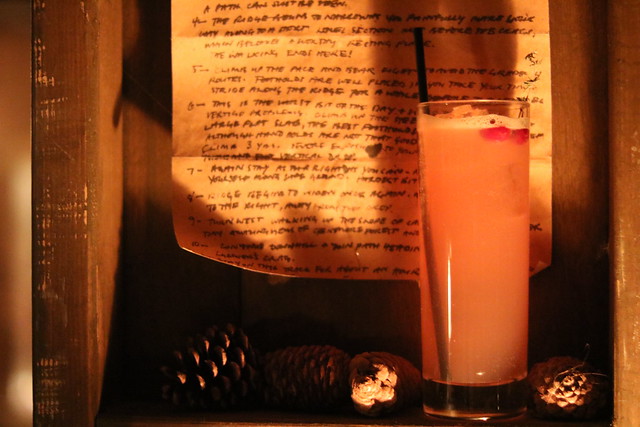 Ami ended the evening with a gin and cranberry cocktail called Mrs. Danver’s Run. The bright pink cocktail was stunning and tasted refreshing. Thyme and tonic provided a much needed balance from the tartness. We were both feeling pretty cozy after indulging in a plethora of fantastic cocktails at the Lodge. We’ll certainly be back to seek relief with cocktails from these dreadful winter nights.

The Lodge at Gallow Green is a charming rooftop oasis in an enclosed ski cabin complete with delicious winter cocktails and cozy vibes in the heart of Chelsea.

The Lodge at Gallow Green is open until the end of March.