Warm weather is in the air and with that comes the spring cocktail menu at The Gibson. Which also marks the beginning of patio season. Between friend-dates and first dates, I’ve spent a considerable amount of time at The Gibson. I was more than up for the task when it was time to taste test the new seasonal offerings.

The Movers and the Shakers

The prohibition-era style speakeasy is hidden in plain sight on 14th Street. The hip watering hole has become quite the staple in Washington over the last decade. Eric Hilton of the Thievery Corporation is one of the proprietors alongside his brother, Ian Hilton. The restaurateur brothers also own a number of other Shaw hotspots including American Ice Company, Satellite Room, El Rey, Brixton, and Marvin. 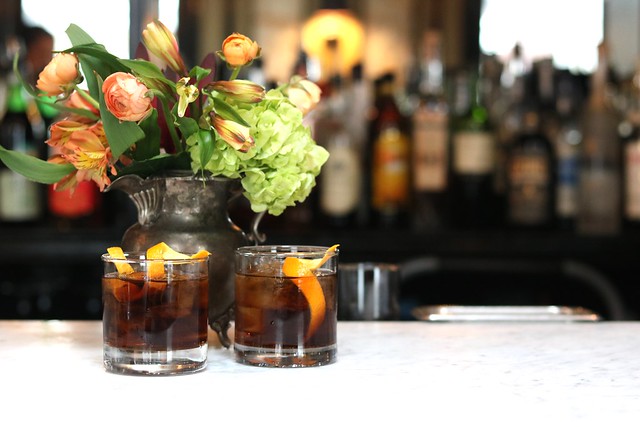 The Gibson may be difficult to locate initially but once you step inside, you’ll feel right at home. Reservations are recommended, but not always required depending on the day of the week.

The dimly lit bar holds a sense of mystery and seats up to 40. Candles help illuminate the intimate space. The bar is adorned with fresh citrus garnishes and herbs. The back room leads to a beautiful hidden outdoor oasis. The Gibson also has three distinctly different rooms available on the second floor. A collection of framed vintage prescriptions with handwritten instructions for homemade remedies provides a playful nod to history. 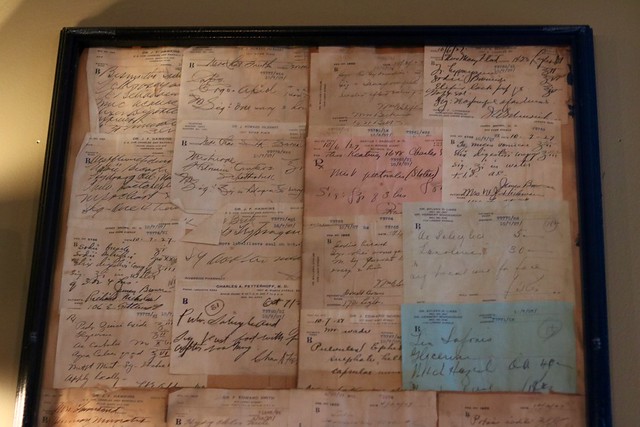 The Gibson is a sleek and sexy spot to bring a date. We especially recommend it for a first date as it’s quiet enough for conversation and just dark enough to set the mood. The lighting also works in your favor if your date isn’t exactly considered eye-candy. My favorite pal Jen joined me to indulge in the delicious libations, which is even better than a date in my opinion. 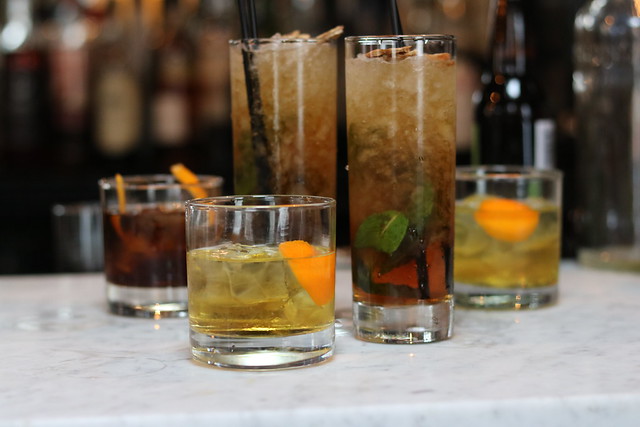 The always entertaining Master Mixologist, Frankie Jones, prepared our cocktails. I knew we would be in for a treat, especially since the recent winter menu was inspired by the mixologists’ past heartbreaks. I knew witty names and unique ingredients would certainly be involved again. It seems love has blossomed for the bartenders as the general theme for spring is less personal, but just as relatable if not more. It only seems appropriate being in the nation’s capital that the new spring menu incorporates a social commentary theme. The cocktails are inspired by pop culture references and hot button issues. 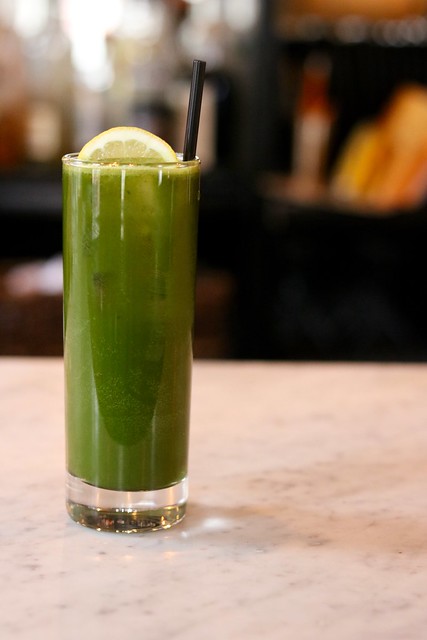 The first cocktail Jones concocted looked healthier than anything I’ve consumed in years. Appropriately named and presented, “Money in Ya Face” calls for a spoonful of matcha powder ginger liqueur, and a lemon wheel. The superfood and vodka-based cocktail gave me the supercharge I needed to power through after a late night. It not only brought Jen and I back to life, but tasted refreshing too. 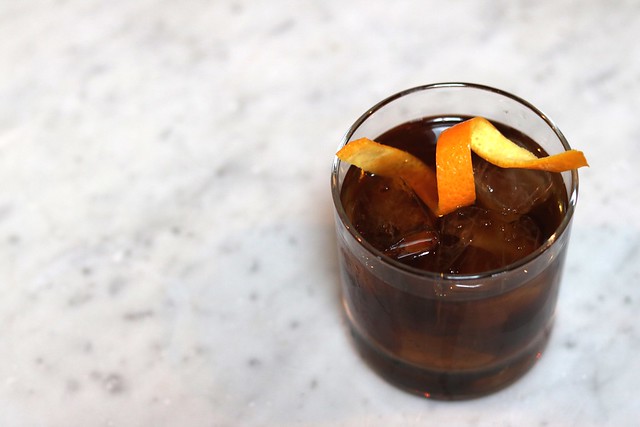 The next cocktail Jones prepared certainly packed a punch. With single malt scotch aged for 10 years as the base, this was too smoky for my weak taste buds. Jen, the whiskey connoisseur took it like a true champ and loved the combination with violet flower liqueur, amaro, maraschino liqueur, and bitters. The strong notes represented it’s namesake: I’m Remy, You’re Nicki. In case you weren’t aware of recent developments, the cocktail was inspired by Nicki Minaj’s epic feud with Remy Ma. We’re just not that cool and had no idea they were even beefing. 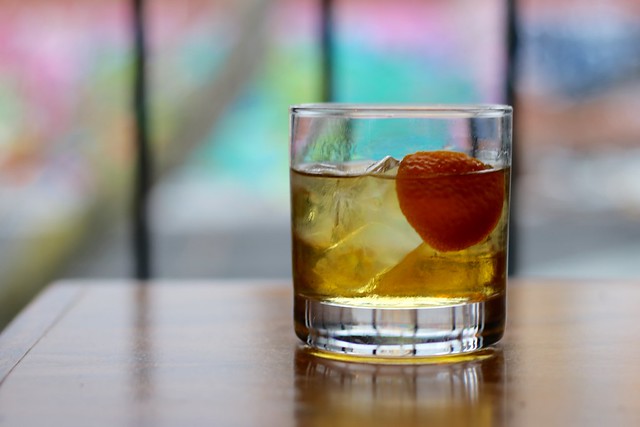 The third libation spoke to Jen and I, especially as products of immigrant parents. Jones created a cocktail in support of women and as an ode to the melting pot in our country. To combat present social issues, the cocktail is fittingly titled “Not Without Immigrants or Women.” The drink combines scotch with tequila, galliano and amaretto served in a rocks glass. We were in awe especially as it involves Cardhu Scotch which is proudly produced by women. 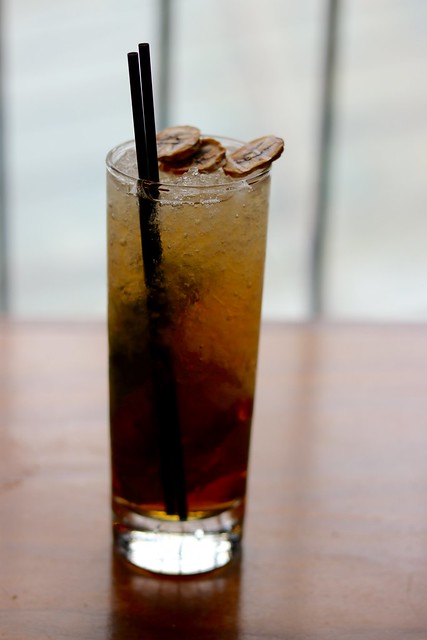 Lastly, the Josephine was served stylishly in a collins glass over crushed ice, topped with soda adorned with dehydrated banana chips. Vanilla syrup, fresh mint leaves, and allspice dram created the perfect blend of flavors against Cognac and bitters. The banana flavored cocktail is a play off French entertainer Josephine Baker’s iconic banana skirt in the 1920’s. With African roots, Baker redefined race and gender norms through her style and performance, which can be credited throughout fashion and music today. We went bananas over the cognac and banana liqueur cocktail. We don’t recommend eating the dehydrated banana chips, as you might break a tooth.

The spring menu also has 20 other interesting cocktails with a story of their own, including my personal favorite the 1900-DRUNK-TEXT with absinthe. Don’t say we didn’t warn you!

We appreciated the selection of cocktails Jones crafted for us along with the social commentary, pop culture references, and history lessons to boot.

To impeccable cocktails with clever names, creative ingredients, and a backstory behind the seasonal offerings. The Gibson isn’t afraid to open the conversation and take a stance on current social issues which we can happily raise our glasses to.