When a full duck, head intact, arrives at your table two thoughts go through your head: 1) thank God I didn’t bring my vegetarian friend and 2) this brunch is probably going to be epic. 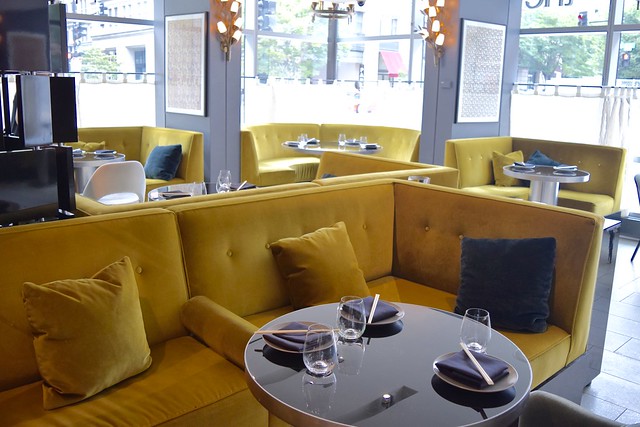 I arrived downtown at The Source, Wolfgang Puck’s innovative Asian restaurant connected to the Newseum and entered a stylish space laden with white table cloths and mustard velvet booths. I was digging the unexpected swanky ’70s vibe. 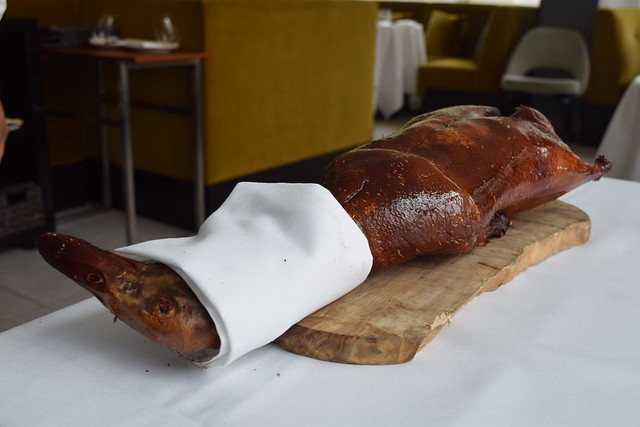 My brunch date, Holley, had already packed in a 9 a.m Saturday morning workout—crazy Bitch—so, by the time I arrived she was a few sips into a well-earned beer. 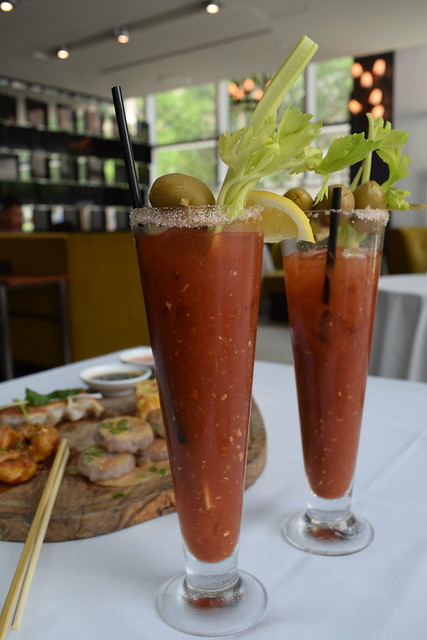 I jumped right on the Bloody Mary train and that caboose was large, spicy, and salty— striking the exact trilogy I yearn for in a Bloody. Holley quickly finished her beer, so she too could get in on the Sichuan Bloody Mary action. 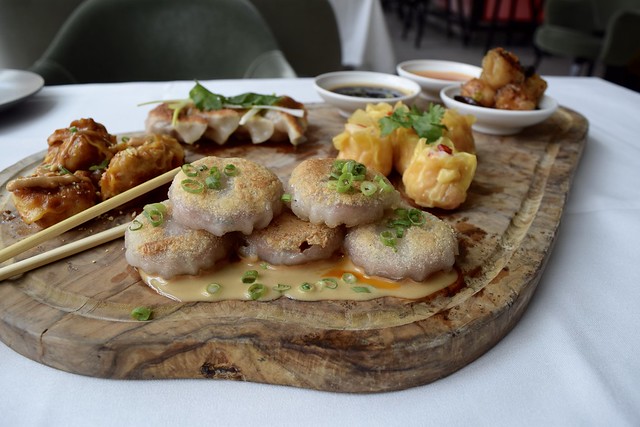 The dumpling platter was a feast for the eyes. We learned that The Source makes their dumplings by hand in house—the chef had already produced 1,500 dumplings that day and it was only 1:30 p.m.

Adventurous eaters, Holley and I both lit up at the sound of a Chai dumpling, but to our dismay we completely misheard our lovely waiter and learned, after one bite, it was in fact a chive dumpling and the flavor profile was a complete flop. It was almost an indescribable flavor and the dumpling itself was structurally difficult to consume. We were however, obsessed with the wok fried shrimp dumplings. They comprised a small bowl of crispy and salty chunks tossed in an XO sauce with blackened chili—we devoured the whole helping. It’s a good thing we didn’t polish off the entire platter because we had about two more hours of gluttony ahead of us.

Rarely do vegetables steal the show, but these sides were memorable. The wok heirloom carrots were perfectly charred and tossed in a honey-tamarind vinaigrette with crushed nuts. We couldn’t get enough of this dish. 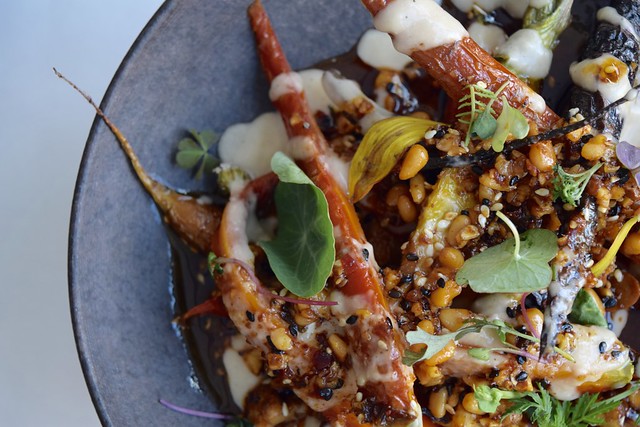 The wok corn, topped with jalapenos, was too smoky for Holley’s taste, but I didn’t mind the charred pork chunks peppered into every other bite. I guess a vegetarian friend would find some delicious options after all. 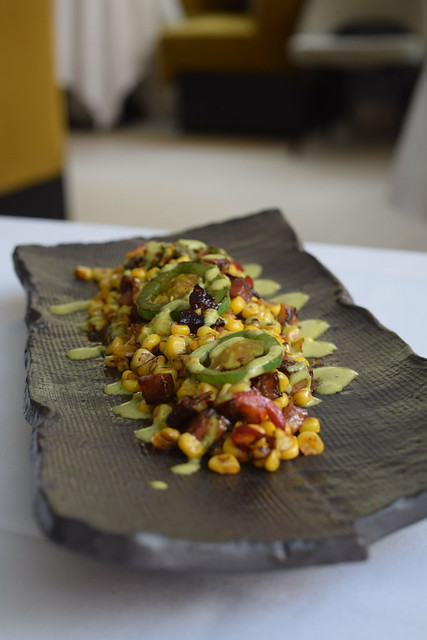 Speaking of pork, the only entree that was technically related to brunch was the salt and pepper pork chop which came with fried eggs on a bed of chili sauce. We thoroughly enjoyed this dish, as it was a nice respite from the Asian fare. 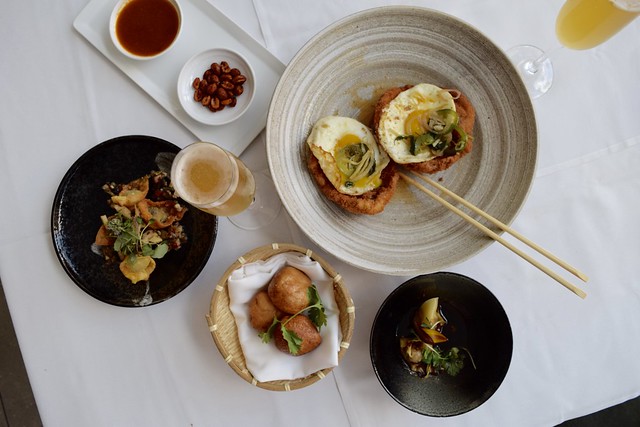 At this point, between two cocktails and laughing so hard our abs hurt, we had a couple of mishaps with stray corn kernels and rogue dollops of sauce. Our lovely server who was not overly doting, but perfectly attentive came to our rescue with a few clean napkins to visibly erase our clumsiness. 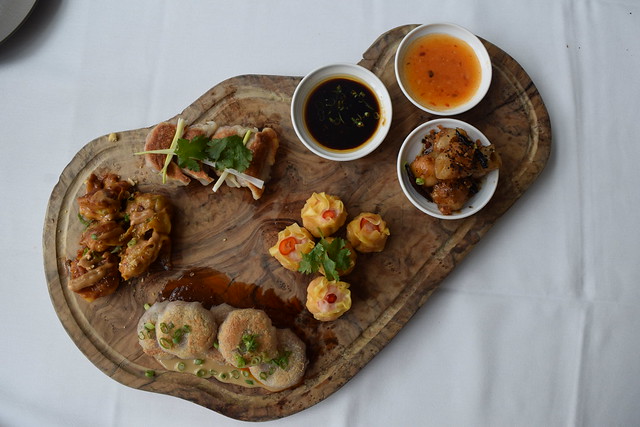 Remember the duck? That little guy served as the basis for our duck bao buns, another highlight of the gluttonous brunch. Two bite sized buns arrived beautifully plated stuffed with crispy skinned, tender duck and packed with slivers of crisp cucumbers. 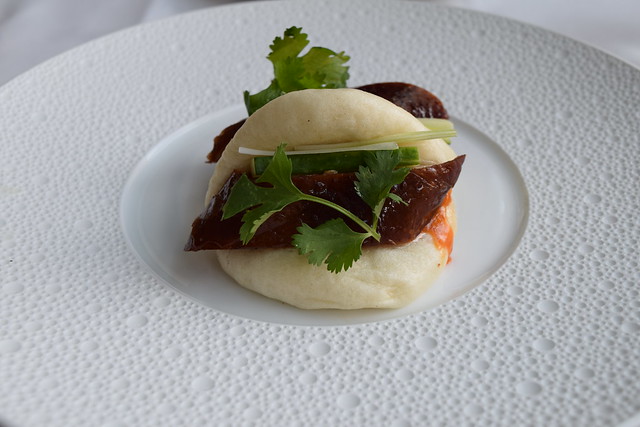 I think I’ve had more soft shell crabs this summer than I ever have in my life. I also think The Source is serving up my favorite version. Between the glaze it was perched in and the crunchy fried exterior, each bite was more delicious than the last. 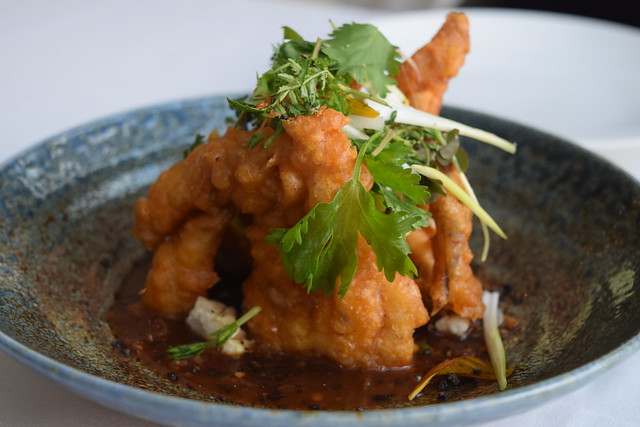 Holley and I see eye to eye on a lot of things and one of them happens to be our aversion to dessert. However, in the name of research, we dutifully dug into the doughnuts that came out at the top of our third hour of brunch. I thought the red miso glazed doughnuts were a leaner version of a glazed Krispy Kreme, which means they were divine. Maybe if I hadn’t filled up on so much soft shell crab, dumplings, and duck, I would have been able to swing more than one and a half bites. 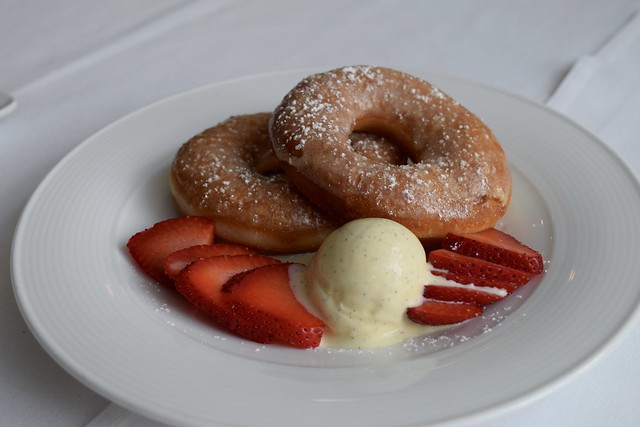 We were unimpressed by the profiteroles, especially because they just looked like they required a ton of effort to eat. Plus, one was made with a watery sorbet which just didn’t make any sense to us. To be honest, at that point we were more interested in filling what little room we had left in our stomachs with a crisp mimosa–the perfect bubbly end to our meal. 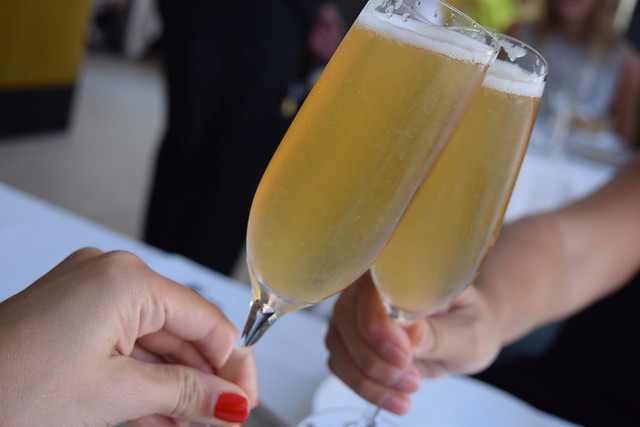 The Bitches say: B+. A swanky Asian brunch, with an emphasis on handmade dumplings. The ambiance and service make it a great daytime date!

The Source by Wolfgang Puck