I’m suspect of hotel restaurants in DC. Sometimes you find a unicorn, but most of the time they lack character and memorable food. To be fair, I’ve passed The Carlyle multiple times and mistakenly thought it was an apartment building. It is, in fact, a Dupont Circle hotel, with a restaurant named for the street that intersects the location, Riggs Place, of the former Riggs bank. Who knew? Now you do. 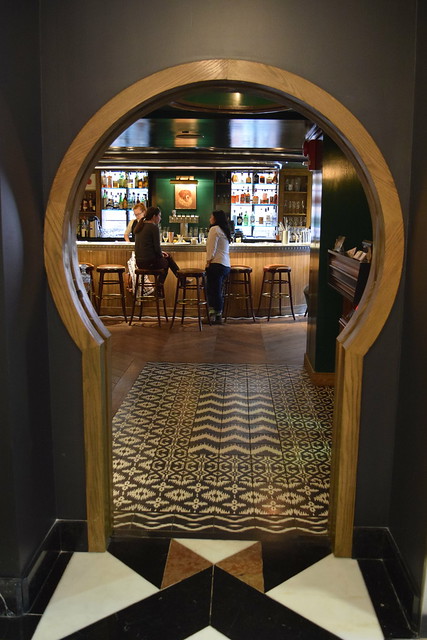 On an unseasonably warm Saturday, Gavin and I met my colleague, his wife, and their adorable two-year-old, Bo, for brunch in a cozy, retro booth at The Riggsby.

Upon stepping through the unique keyhole entrance, you are immediately transported into a different era, where hunter green walls, Old Fashioned cocktails, and leather booths set the scene. The space reminds me of somewhere Jay Gatsby might go for dinner. 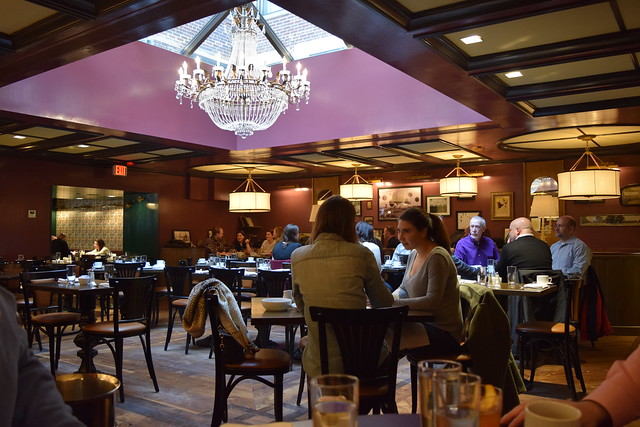 Eric and his wife, Erika (cute, right?) are foodies, but since the arrival of their little nugget, who has also developed quite the palate, they don’t get a chance to come into the city to dine as often as they once did.

This was a later brunch, so we quickly ordered two starters that caught our eye: the avocado toasts and deviled eggs—the latter is an atypical order for me, but Eric is a connoisseur, so we had to try them.

As we waited for our appetizers, Eric noted that he was sipping on a solid Old Fashioned. It was properly made with a thick, single ice cube, topped with an orange peel that “doesn’t get in the way.” 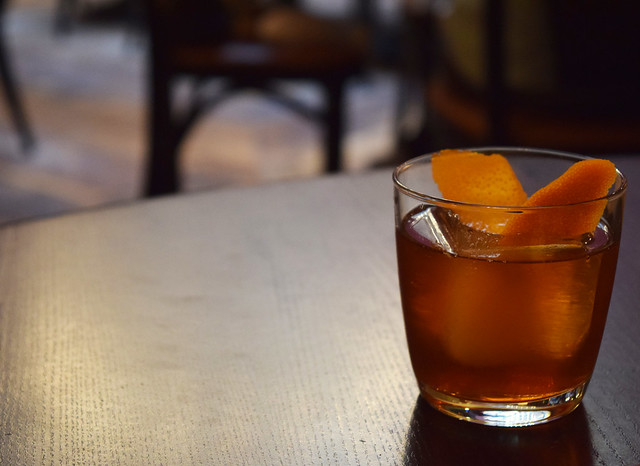 When the appetizers arrived, we noticed that jalapeños were prominent in both of the dishes, an unexpected theme that would ring true throughout the meal. The deviled eggs were tasty, but not the best Eric’s ever had. The crispy chicken skins gave them a salty crunch and the chilies definitely gave them a kick. 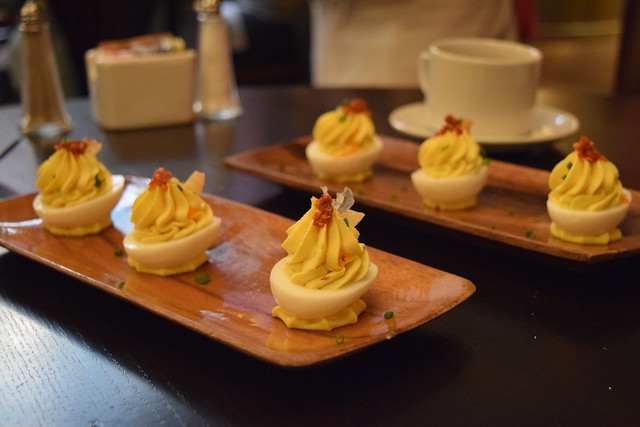 The avocado toasts were light and the perfect two-bite app. The toasts were topped with fresh Maryland crab meat, pickled onions, and finished with a small slice of jalapeño. I was glad we placed two orders. 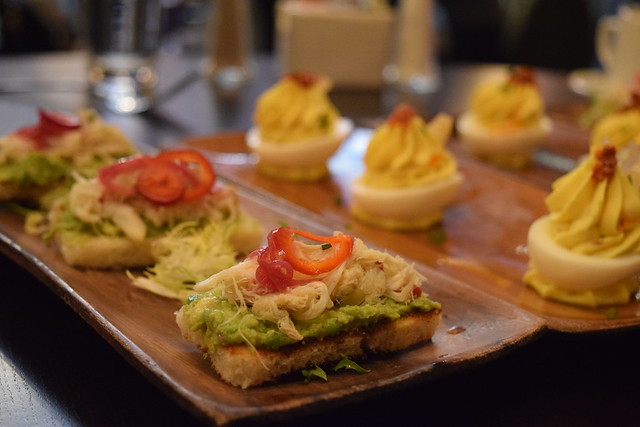 Still full from our gluttonous dinner at Masseria the night before, Gav decided to go with the Morning After sandwich, which aside from the egg white omelet, was surprisingly one of the lighter offerings on the brunch menu. He loved that the sandwich came stacked with prosciutto ham, two fried eggs, and pecorino cheese on a thick roll. There was a hint of rosemary on the sandwich, perhaps from his side of potatoes. 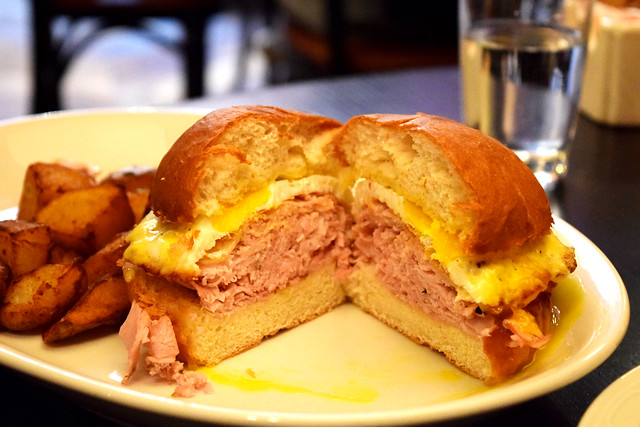 Remember when I said I didn’t love pancakes? Well, Bo placed a killer order for the buttermilk pancakes, and had me rethinking the whole game. The pancakes were spread on a long plate, doused with caramelized bananas, crushed hazelnuts, and powdered sugar. They tasted like a fluffy version of vanilla dessert crepes. He went to town on them for a solid 15 minutes and I couldn’t blame him. 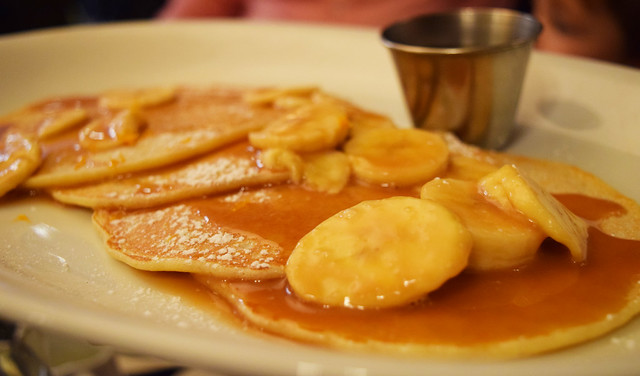 Eric and Erika both decided on the Maryland lump crabmeat hash poached eggs and ordered a side of bacon for the table.

The bacon came out in a hot skillet and was placed right next to me. Great. Two thick-but-crispy bacon strips later, I decided to share the love. 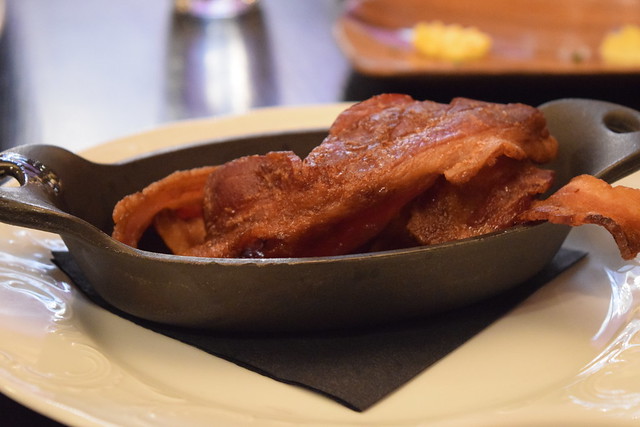 The lump crabmeat and poached egg entree came topped with jalapeños, no surprise there. Erika’s eggs were cooked well, but Eric’s eggs were a bit overcooked. The crab cake was tasty, but dry and the English muffin didn’t add much value to the dish. 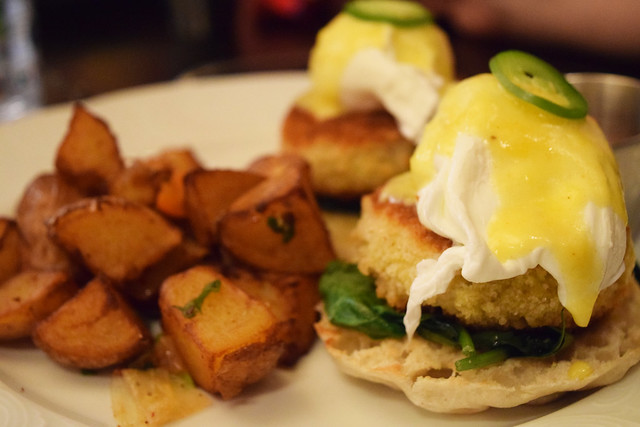 I was curious about the schnitzel “A La Holstein” and after a hard sell from the waitress, I panic ordered it. I’ve been into simple, thin meats lately, so I decided to take my chances. I was glad I did, as we thought it was one of the best dishes we sampled. However I somehow missed that it came with anchovies and capers, an unnecessarily salty combination, in my opinion. The side of roasted baby potatoes was my favorite part. They came with shaved red onions and a light dijon mustard sauce that was addicting. 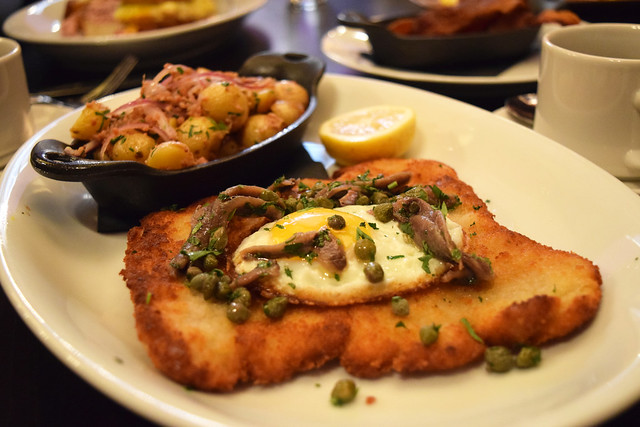 We felt like we stumbled into a hidden gem at The Riggsby, and couldn’t tell if the other diners were in on this secret or merely visiting for the weekend. Either way, we’ll definitely be back to try more craft cocktails at the sexy bar.

The Bitches say: B. The unique and glamorous, vintage-inspired space is not what you’d expect from a hotel restaurant, and that’s what we like about it. Its solid brunch menu and craft cocktail list will keep The Riggsby in our back pocket.

The Riggsby serves brunch Saturdays and  Sundays from 11 a.m. to 3 p.m.