Who knew there were so many different ways to have meatballs? The crew at The Meatball Shop, that’s who! 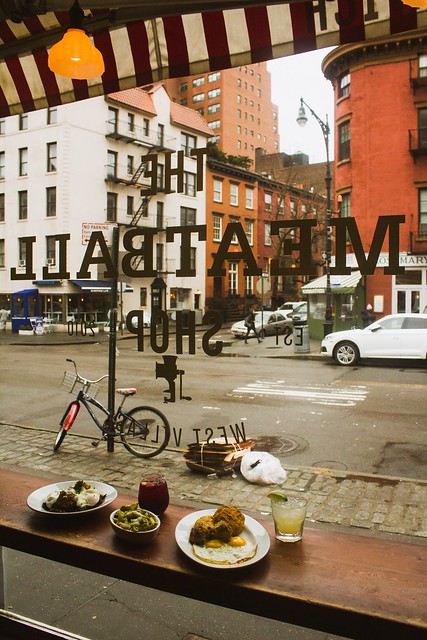 On a recent partly cloudy day (trying hard to make a Cloudy with a Chance of Meatballs joke here) a friend and I decided to hit up The Meatball Shop at their West Village location for some brunch. They also have outposts in Chelsea, Hell’s Kitchen, Upper East Side, Lower East Side, Williamsburg, and if you’re in D.C. they have one there too! Despite its multi-location structure, it manages to not feel like a chain restaurant in where each is a carbon copy of the next. This West Village spot boasts a cute little red and cream striped awning, all very fitting with the quaintness of this part of downtown Manhattan.

Now, let’s kick things off with cocktails. As fellow pun enthusiasts we put an order in for what they call, “Becky with the Good Pear” whilst having a giggle to ourselves. Then we also opted for the “Devil’s Juice Sangria” to try out something a little different. 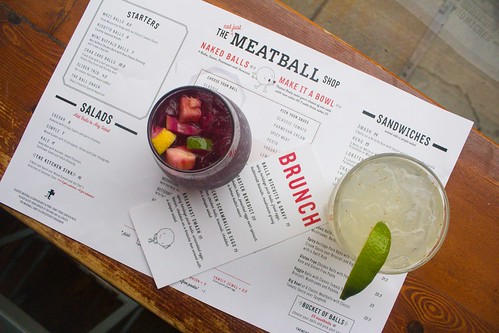 The “Becky With The Good Pear” wasn’t quite as interesting as the name set it up to be. Just a classic margarita-style drink over ice with a lime wedge. That being said, it’s refreshing and goes down nicely. As for the sangria, it was fab! Not to be dramatic but I think it’s the best sangria I’ve ever had! Nicely chilled with diced fruit like apple and pear all up in there helped to add lots of flavor as well as helping to balance out the brandy and red wine components. We were pleasantly surprised by how much the sangria knocked it out of the park.

For our entrees we chose the lobster Benedict and the balls, biscuits and gravy. There aren’t many gluten free options when it comes to balls (only the chicken ones) so we also ordered a pesto pasta, opting for  gluten free penne. 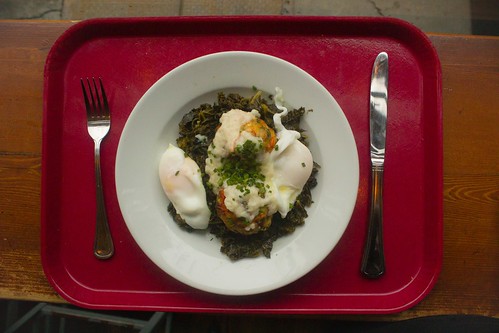 First up for review, the lobster Benedict. This dish came fairly different to what I was expecting, being nothing like any Benedict I’ve ever seen before. There’s no toast nor English muffin and no traditional Hollandaise neither. The lobster balls are served on a hefty pile of sautéed spinach accompanied by a lemon butter sauce and two poached eggs. I’m not saying it’s bad, just different. The balls themselves were good, the pieces of lobster were tasty and juicy as you’d expect. The eggs were perfectly poached and the spinach was yummy. I think the biggest issue here is calling it a Benedict. 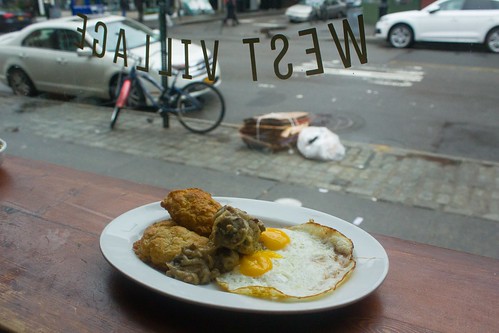 Next up, the balls, biscuits, and gravy. As a biscuit fan I knew I just had to get this dish and it came out how I thought it would. No bells and whistles but I was satisfied. The fried eggs were perfect; not too runny, not too overdone. The balls themselves were tasty, nicely cooked and were only enhanced by the delicious mushroom gravy that came with it. The biscuits themselves were okay. A little on the crumbly and flat side but the flavor was on point. As long as you don’t try make a sandwich out of it; just throw all that goodness on your fork and you’re good to go. 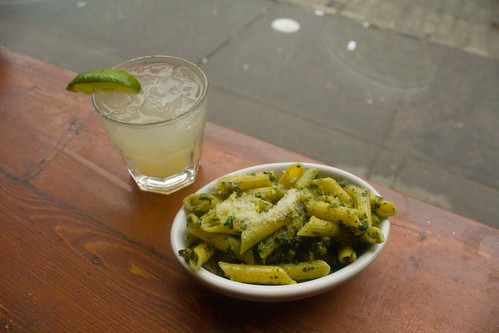 Last but not least, the pesto gluten free pasta. I’d say this is the least experimental dish we got but nonetheless a fantastic reliable one. The pesto is great – nice, fresh, chunky and not too runny or oily that it all slides off and collects in the bottom of the bowl. With gluten free pasta options this dish is an absolute crowd pleaser and a solid one at that. Definitely a dish I would re-order if I didn’t know what else I wanted.

The Bitches say: three Champagne flutes, (almost a four). The Meatball Shop has super friendly staff and a cool, industrial feel at this “chain” outpost create a relaxed vibe. If you’re looking for a fuss-free place to go with friends or family, go here and have a ball (or two).