I can’t remember ever feeling as cold as I felt on my way to brunch this particular Saturday. So cold, in fact, that my phone shut off and I was left having to ask a stranger for directions from the subway to The Loyal, my brunch destination where my good friend, Shannon, was waiting for me.

A chic neighborhood brasserie that opened its West Village doors late last year, The Loyal is the latest brainchild from John Fraser, the chef and restauranteur behind other NYC mainstays, like Narcissa, Dovetail, and Nix. I had read great things about the place from various outlets, and seen a few menu items that left me drooling on fellow food bloggers’ Instagrams. To say I was excited to have this be my first brunch of the New Year was an understatement.

The menu has a new American flair and offers something for everyone, with brunch classics kicked up a notch and made its own. Take the Bloody Sunday Set, for instance. Rather than whipping up a Bloody Mary behind the bar, like any restaurant can, The Loyal brings the bar to you and lets you play bartender with a mini banquet set. 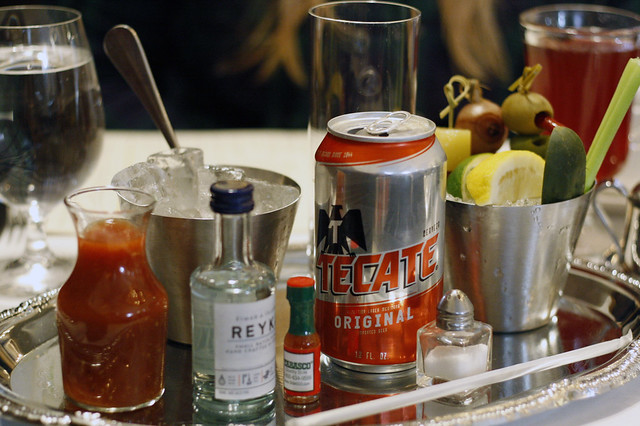 A mini bottle of vodka or tequila (your choice!) and house Bloody mix is flanked with a buffet of accoutrements, like olives, pickled veggies, cheese, and meats. Oh, and there’s also a can of Tecate for good measure–to either chase your cocktail, or add into the mix to become a Michelada of sorts. I loved the make-your-own feel, without having to leave my seat, and the house mix was top-notch. 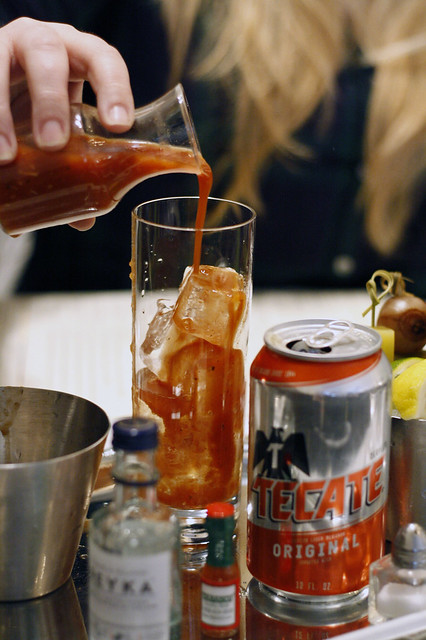 Shannon opted for a hot cocktail (did I mention it was FREEZING out?), and ordered the José. The José was crafted with mulled rosé wine, tequila reposado, and Autumn spices, balanced together nicely. This cocktail was reminiscent of a classic mulled wine with a modern twist. 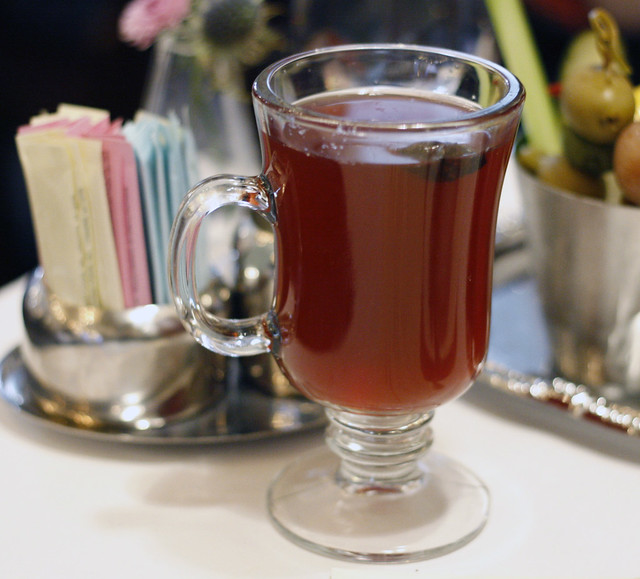 After taking our time catching up over cocktails, and making our way through the Bloody Sunday set, it was time to order. We landed on an appetizer and a few fancy toasts to share, as well as an egg dish and a savory skillet cake. 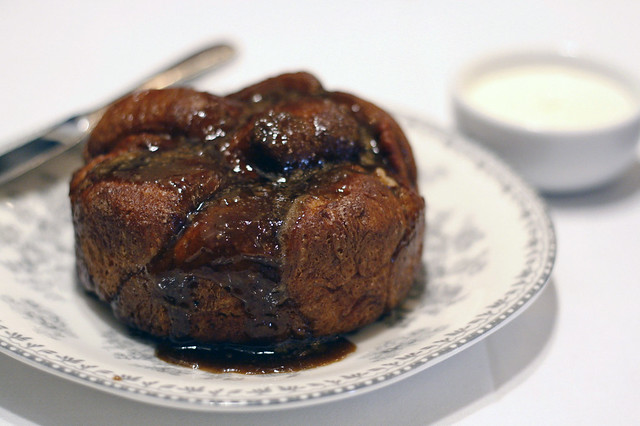 First up was the monkey bread: fresh out of the oven and served with a side of cream cheese frosting. This dish was utterly divine. Perfectly warm and ever so slightly crispy on the edges, with just the right amount of doughiness in the middle, the monkey bread was devoured in an instant. We debated ordering a second round to snack on during our meal—it was just that good. 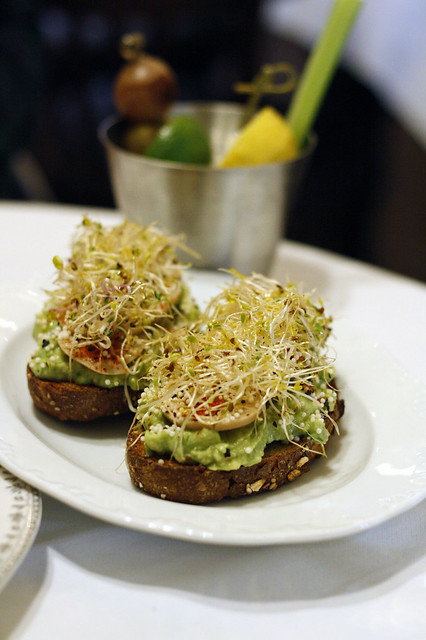 In an effort to feel a tad less guilty about how quickly we consumed the monkey bread, we opted for the avocado toast next. Thick, toasted sourdough bread was topped with a chunky avocado spread, lemon juice, a drunken egg, sesame seeds, and sprouts. This was your classic avo toast, but amplified. The lemon juice really helped the avocado shine, while the drunken egg provided a hint of spice.

We also ordered the smashed beets toast at the insistence of our server (who was absolutely delightful), after he had exclaimed it was one of his favorite things on the brunch menu. Smoked trout, Bulgarian feta, horseradish, and pistachios were piled on a layer of crushed beets. 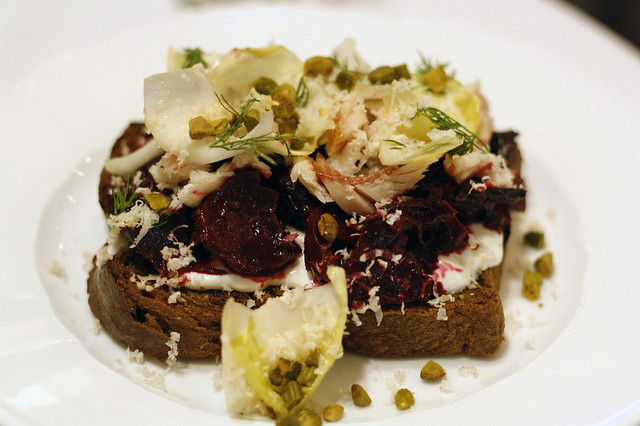 Our server was right, and I’m glad we heeded his advice–the flavors in this dish were absolutely explosive. The creaminess and richness of the feta and beets, combined with the smokiness of the trout and the earthiness of the pistachios made for the perfect mouthful. This may very well be one of the most elevated, and most delicious, fancy brunch toasts I’ve ever tried. 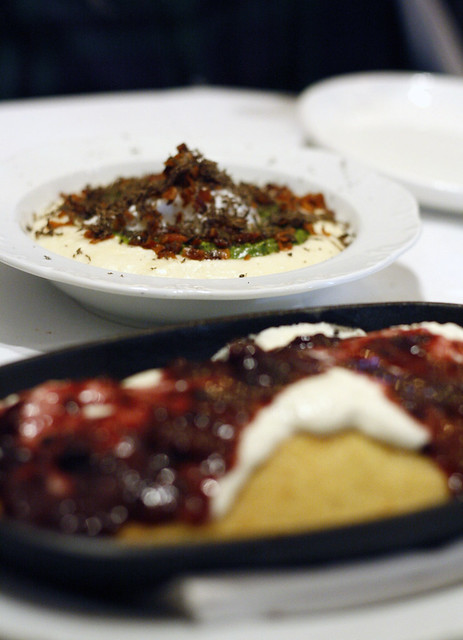 The truffle heirloom polenta and olive oil skillet cake arrived next. Creamy polenta was drizzled with a emulsified broccoli oil of some sort and topped with thick chunks of bacon, thinly shaved truffles, and a perfectly poached egg. 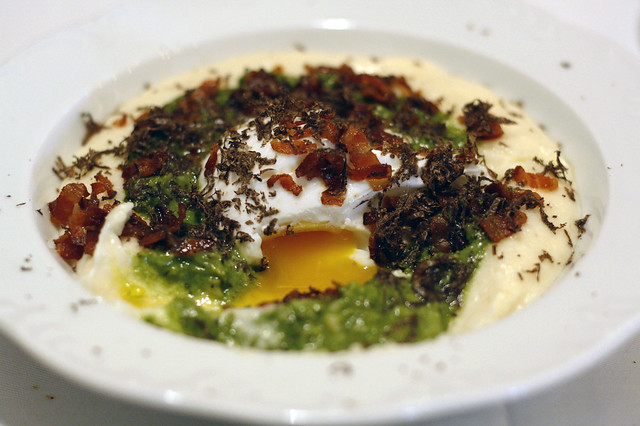 You can’t go wrong with truffles, but sometimes, they can overpower the other flavors in the dish. Thankfully, that wasn’t the case here. We still picked up on the rich, earthiness of the truffles, but the flavors from the bacon, broccoli oil, and egg still shined through. Everything was impeccably seasoned, and this was the other standout dish of the day. 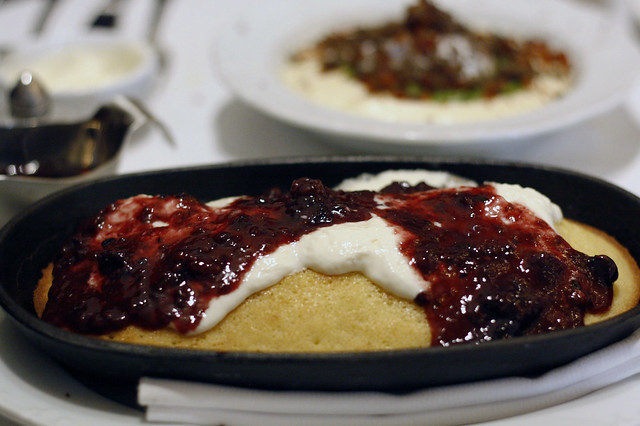 We rounded things out with the olive oil skillet cake with whipped ricotta and jam. Imagine a pancake and something similar to cornbread had a baby–that’s what a skillet cake is. I was worried the whipped ricotta and jam would make this dish overly sweet, but they perfectly complimented the savoriness of the olive oil skillet cake. Plus, the dish was served in the same skillet it had been cooked it, giving it a nice crust on the sides and bottom. Just like everything else we ordered, we ate every last bite and left the restaurant raving about our meal.

The Bitches say: A+ We don’t just dole this grade out for any old brunch. Trust us when we say The Loyal offers one of the best brunches in town–we’re already planning a return visit to this West Village brasserie.

While this article was written independently, The Loyal did have us as their guests for brunch.