I’ve long wanted to brunch at The Henry, a charming restaurant in downtown Phoenix. Admittedly, a restaurant in Phoenix is sort of an odd destination. But, I’d seen the adorable china blue, black-and-white restaurant in dozens of Instagrams from other bloggers and influencers I admire. And, these days my life tends to revolve around traveling to Instagram-worthy brunch destinations. There are certainly worse purposes to have.

We’d had an incredible weekend in Phoenix: paddleboarding in the Salt River, doing yoga with goats in Mesa, and driving up to Sedona for a Pink Jeep Tour of the gorgeous red rocks. In addition to our outdoor adventures, we were surprised by some incredible meals: an incredible dinner and unforgettable tuna crudo at The Gladly, mind-blowing craft cocktails and a ramen burger at Bitter & Twisted, and gourmet tacos at Crujiente Tacos to name a few. Our full guide to Phoenix publishes tomorrow—so come by for the full scoop.

We saved the best for last—fitting in a brunch at the Henry, on Camelback Road, on our way to the airport. The Henry is massive—it’s owned by a popular restaurant group, Fox Concepts, and sits alongside a coffee shop owned by the same company, and the Fox Concepts HQ. In front, there are charming French bistro tables under black-and-white umbrellas. Inside, it is a bustling, preppy and retro restaurant: it’s a mix of 1920s French chic meets New England prep—there are marble tables and Louis XVI style chairs in the front, and farther back, cozy leather tufted booths and a navy and hunter green color palette.

We chose to sit outside on the patio, which had a china blue and white aesthetic. There was ample seating under white marble tables under blue-and-white umbrellas with Spanish style, blue, white, and green tile and greenery on the walls. It was utterly charming. I’d like the decorator to call me—can you do my house? 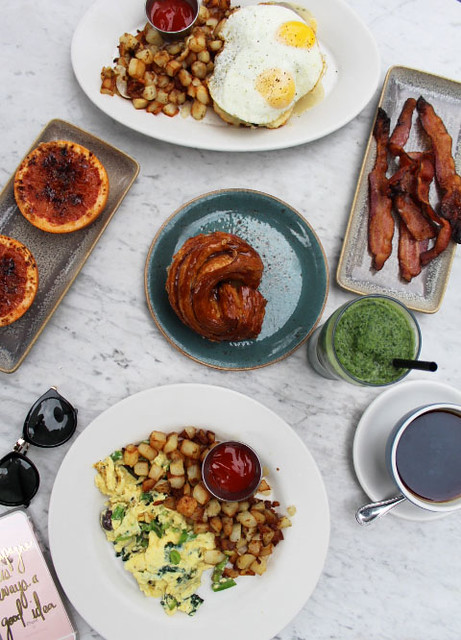 The waiters, who are mostly college-aged gents and absolutely adorable, were dressed in baby pink chambray button downs with navy knit skinny ties. Frankly, their ensembles are more stylish than most of the patrons. Every detail at the Henry is perfect. 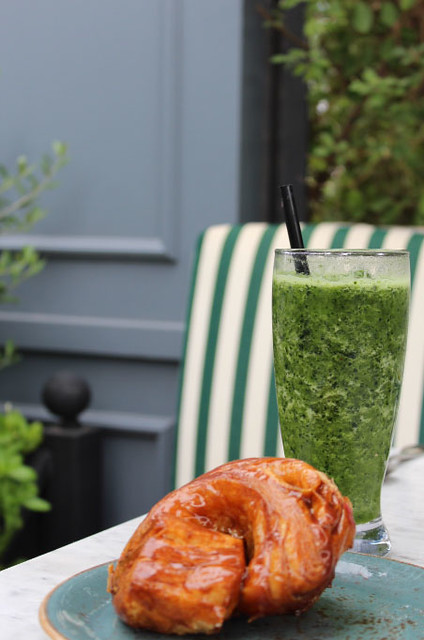 I was ready to detox after a gluttonous weekend, so I ordered a black coffee and a green smoothie of kale, spinach, and banana—hold the yogurt. I was pleased that the Henry offered healthy smoothies, and no less than thrilled when they made my smoothie as desired. Our darling waiter, Isiah, just grinned at us the whole time. (He’s lucky we didn’t take him to the airport, too.)

The pastries looked divine, so we ordered the cinnamon pecan roll and the Bundt cake. The pecan roll was structure—flaky croissant bread baked so that it was crispy and caked in caramel, but not at all too hard. 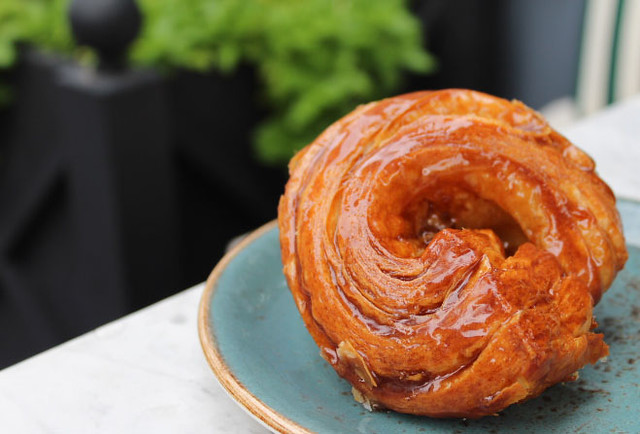 Meanwhile, the fresh-baked Bundt cake was moist and warm. A fluffy, classic vanilla Bundt cake topped with a vanilla bean glaze. Despite being gluten-free, it was incredibly fluffy—my guess is that it was crafted with rice flour. 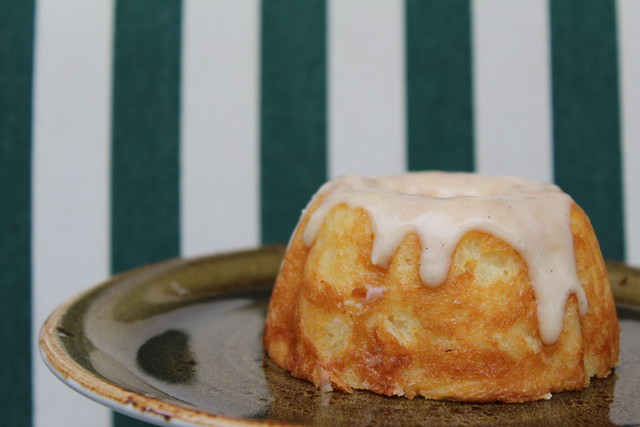 I always order a side of bacon—this bacon was pretty darn good. We appreciated that it wasn’t too oily, and not too crispy, but just right. 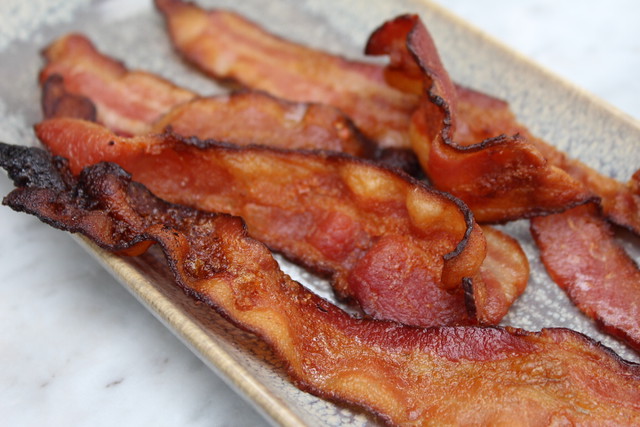 Caramelized grapefruit is also a must-order for the Bitches, and these babies were real beauts. The grapefruit was cut so that it was easy to eat, and the caramelized sugar was perfect, not too excessive. Bravo! 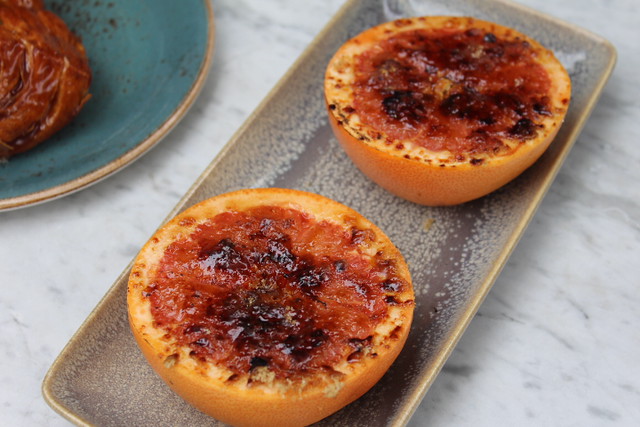 Sticking with my intention of a healthful start to the week, I ordered the veggie scramble, hold the Parmesan. The fluffy eggs were served with fresh peas, spring onions, and asparagus—so much greens! It was super clean and the veggies were very fresh. Admittedly, it lacked a bit of flavor compared to the rest of the meal and the rest of our meals in Phoenix. My fault for choosing to hold the Parmesan—but a sprinkle of salt fixed everything. 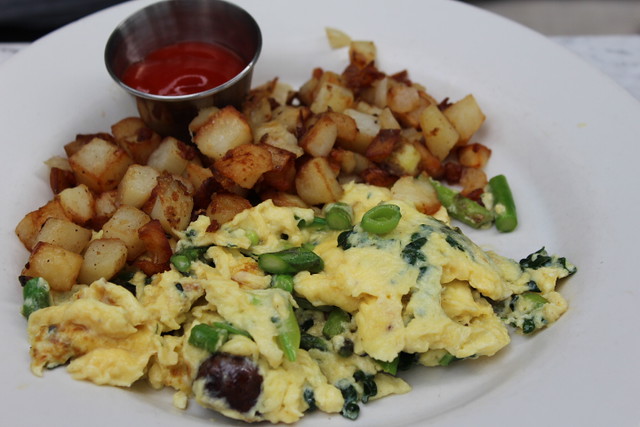 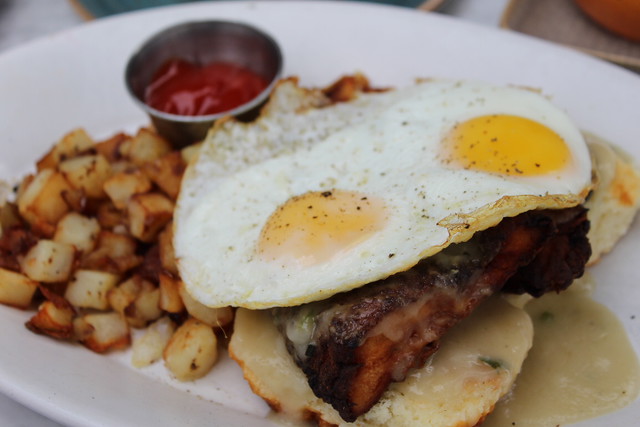 Armed with iced coffees to go, we departed for the airport ready to work and nap from the plane, respectively. We loved every minute of Phoenix—thanks Visit Phoenix—and a happy conclusion with brunch at the Henry.

The Bitches say: A. A charming ambiance, adorable, helpful service, and top notch cuisine, the Henry is a brunch destination should you find yourself in Arizona.

Thanks to Visit Phoenix for partnering on this post!