It was the first Saturday that truly felt like fall. We took advantage of a leisurely weekend in town. We walked around Georgetown, explored a new beer garden, and caught a Georgetown University Men’s soccer game. Invited in to try the Grill Room at the Rosewood Hotel’s new menu, we thought this brunch would round out a quintessential fall weekend. 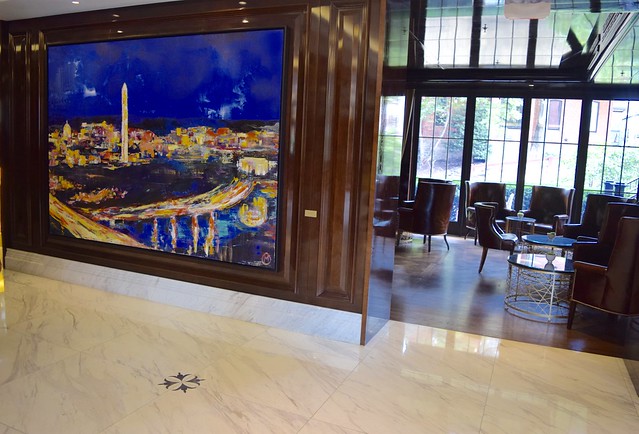 The dapper, upscale Rosewood Hotel is tucked away just off M Street in Georgetown alongside the canal. My husband and I have shared a nightcap or two at the Rye Bar, a cozy bar that feels like a swanky library filled with leather bound books. The Grill Room, however, is an upscale, white table clothed space that’s much brighter, thanks to the floor-to-ceiling windows that overlook the narrow patio on the canal bank. Despite its pleasant atmosphere, the restaurant was quiet and empty. 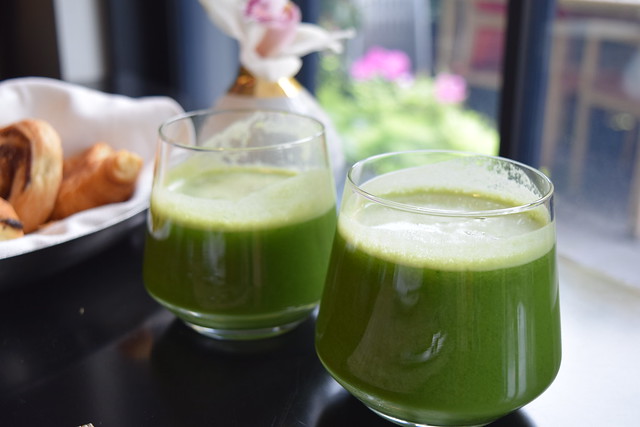 We were in a healthy mood, so we decided to start with a green juice made with apple, spinach, cucumber, mint, and ginger. It came out in a nice sized portion, was not too frothy, and left a refreshing taste in your mouth. We really enjoyed this start to our meal. 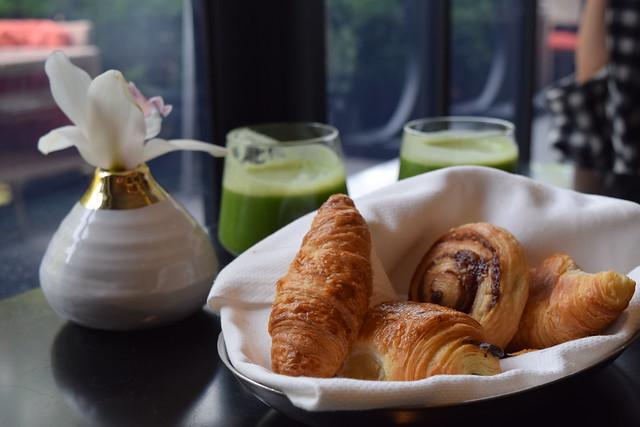 The pastry basket sounded tempting, so we placed an order for butter and chocolate croissants, a cinnamon-sugar pinwheel, fruit danish, and seasonal preserves. We were disappointed when a basket of mini pastries arrived, and the fruit danish was no where to be found. And, where were the seasonal preserves?  Each lackluster bite of carbs confirmed these croissants were on par with the offerings of a continental hotel breakfast and paled in comparison to some recent bread baskets we’ve sampled in our fair city.

The tuna tartare served with avocado mousse, chunks of pineapple, and a small serving of lotus root chips was a nice appetizer, but the sauce was overly salty. However, the tartare was one of the highlights of our meal. We just wish they would have stopped trying to clear the plate so fast! It’s rare we leave any ahi behind. 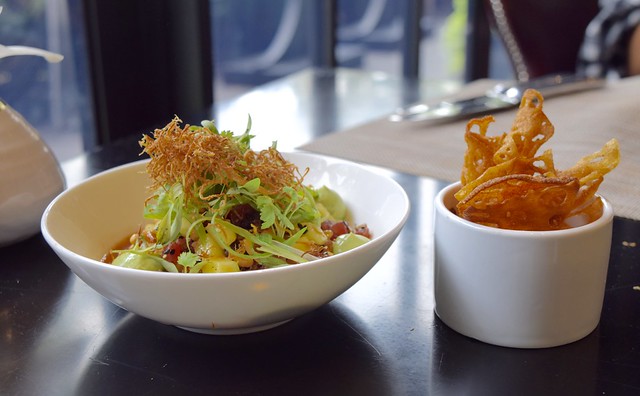 The avocado toast was light and flavorful. I enjoyed the multi-grain bread and the ribbons of red onion, but for the price tag I expected it to be a heartier helping. Evaluated for taste alone, this dish was one of the better items we noshed on. 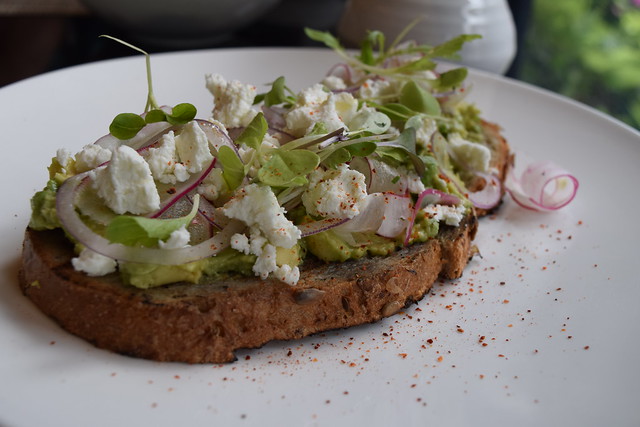 At this point, we had a lovely surprise visit from the bartender who welcomed us to the restaurant and encouraged us to swing by the Rye Bar for a drink after brunch. Learning we had back-to-back engagements, she sent over two handmade concoctions for us to sample: a virgin lemon grass sparkling water and a passion fruit gin cocktail. It only took a sip for us to agree that the drinks steal the show at Rosewood Hotel. 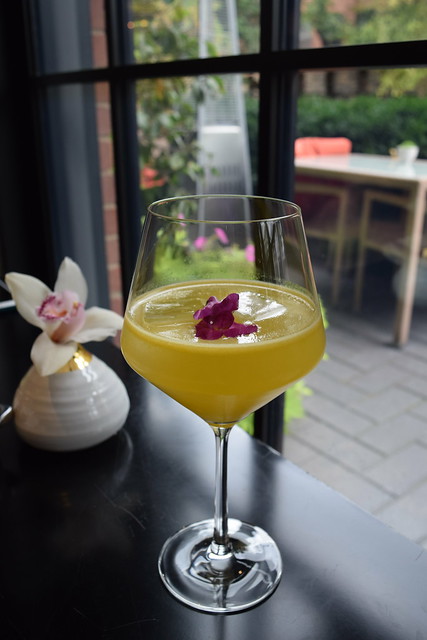 I opted for the spinach and goat cheese omelet, following the recommendation from our server. Much to my dismay, one puncture to the middle of the omelet revealed a completely overcooked, dry egg with undercooked mushrooms and burnt spinach. I hoped that each bite would be better than the last, but it was a lost cause and I quickly gave up on the dish. Eggs are a staple on any brunch menu, so if they aren’t cooked properly, it’s often a sign of more shortcomings. 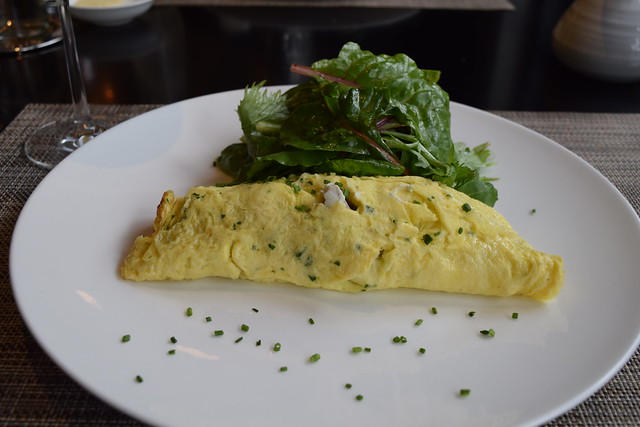 Things got awkward and uncomfortable when my date tried to order the griddled pastrami and gruyere. After ordering, he was told by our server that it was bad, not to order it, and to try something else. A bit befuddled, we both looked at each other over a long, awkward pause. He asked for the menu back, and then panic ordered the steak frites. My guy happens to be a master at cooking and consuming meat, and reported that, for the price tag ($30+), this dish was nothing special. Even French fries couldn’t make up for the awkward situation. 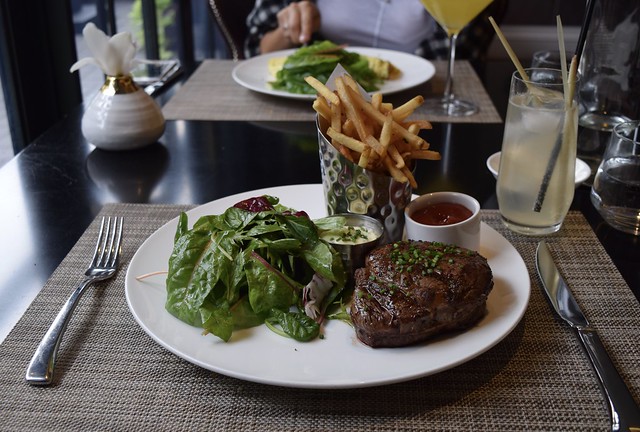 We were about ready to call it a day, when the chef graciously sent us an unexpected dessert. The sticky bun arrived looking decadent with a tantalizing sauce. But, once we dug into the dry braided bun we realized it looked better than it tasted. 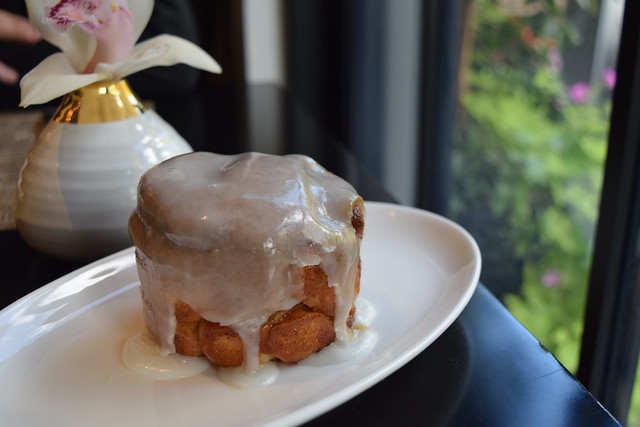 The Bitches say: C+. A luxe location where the execution did not match the price tag. The drinks are top notch–from green juice to gin and juice–so we’d recommend indulging at the cozy bar or on the quaint patio.