Few things make my husband and I happier in life than getting to spend time with our dog, Buster. I know everyone is obsessed with their dog, but we are really infatuated with our 12-year-old boxer. And, we really do work hard to give our dog a better life, as they say. From cross-country drives to D.C. to ensure he isn’t left behind in Chicago over the holidays, to planning weekend getaways around where we can find pet-friendly hotels and resorts, we take our guy everywhere.

In the summer, weekend brunch is no exception. When I was invited to come check out The Blanchard, an upscale French restaurant in the heart of Lincoln Park, I was delighted at the thought of brunching in Lincoln Park with my two guys, followed by a day in the park. 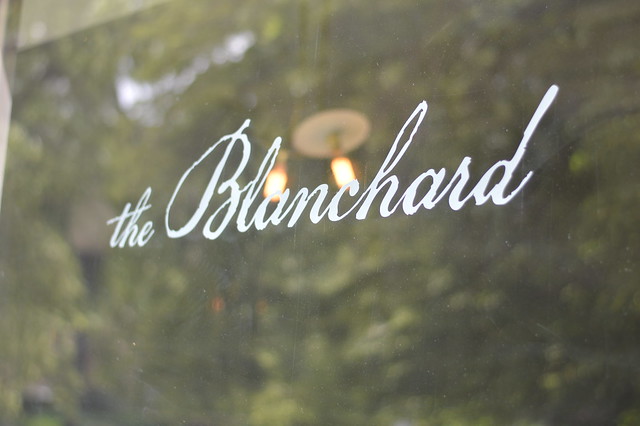 The Blanchard is a gorgeous, somewhat hidden gem, tucked just around the corner from the park, right off of Clark Street. Once you spot The Blanchard, though, you know you are at the right place. The patio is reminiscent of a Parisian pâtisserie, complete with wooden wicker chairs, stone tables, and twinkling lights hanging from the tree branches above. It would be the perfect place to host a wedding or bridal function, such as a shower or an engagement party.

With Buster in tow, Chris and I chose a seat on the open—and empty—patio. We were surprised that we were the only patrons at the restaurant; it is super charming and with a quiet patio I can’t imagine why it wouldn’t be packed every weekend. Though with the gorgeous weather, and it being Father’s Day weekend, they noted that dinner the previous night had been more bustling, and that such a slow Sunday was out of the ordinary. 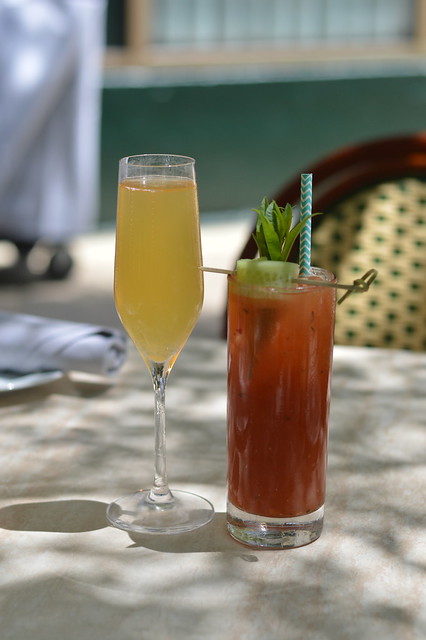 Parched, we were anxious to indulge in some brunch libations, first. There were two specialty cocktails on the menu; one was The Blanchard’s specialty mimosa, and the other was a watermelon Bloody Mary. Chris went with the safe choice of the mimosa, while I decided to be a little adventurous and try the watermelon concoction. 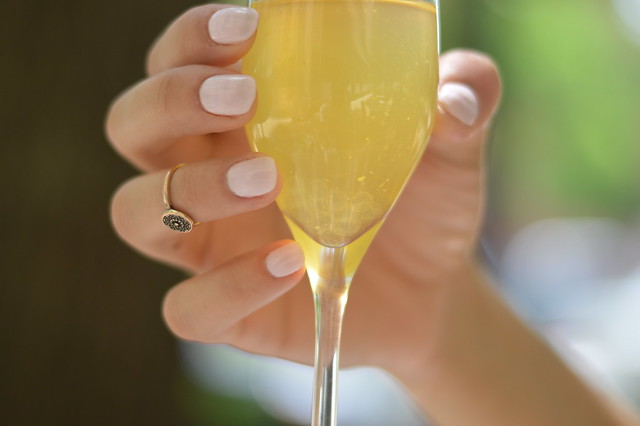 Both beverages were insanely delicious. My watermelon Bloody Mary was a flavorful: a sweet, yet spicy Bloody that was perfect refreshing for a brunch in 90 degree weather on the patio. I loved the mix of a watermelon gazpacho with green chile liqueur, and a hint of sweetness from a raspberry vinegar. I was so impressed with this drink, but was even more impressed with Chris’ mimosa, surprisingly. The mimosa had small little balls that had sunk to the bottom of the glass. The little bubble balls were a unique way for Chef to incorporate another flavor into the drink, and they burst in your mouth when you managed to get one in a sip. We were so impressed with this unique mimosa. And, in case you were wondering, Buster enjoyed his ice water. 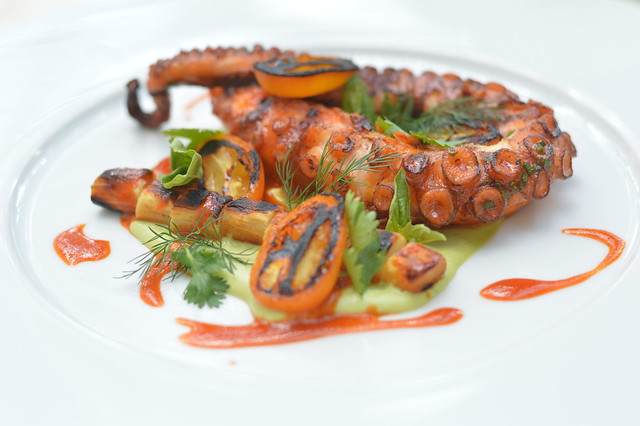 I must say that the menu at The Blanchard was full of so many delicious-sounding options, it was difficult to chose. Thankfully, our wonderful server was more than willing to help in our decision making. She recommended the Spanish grilled octopus to start, and we were not opposed. 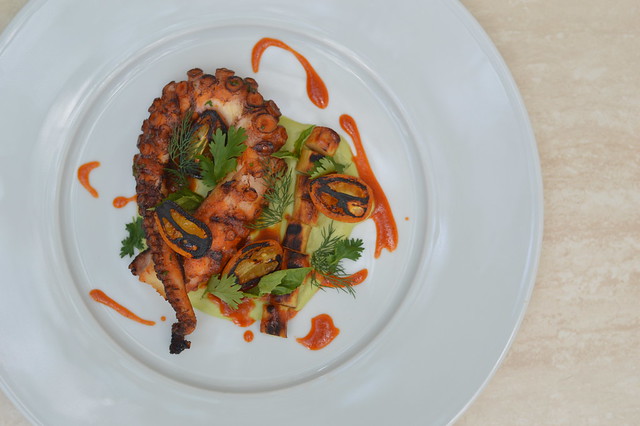 The octopus arrived; and we were in absolute awe of its presentation. It was cooked perfectly, and as we discovered, it was no coincidence. The octopus is prepared in a unique way every morning, cooked to release its juices, and then fired off on the grill upon being ordered. The result? A perfectly charred, yet juicy and tender octopus, that is anything but chewy. It was accompanied with charred kumquats, fire roasted salsifs, pepitas veloute, and chilis. 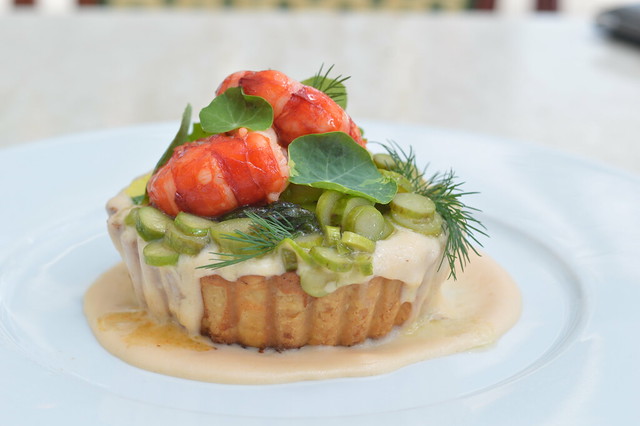 Additionally, I couldn’t resist ordering an egg dish that came with black truffle. So I had to order the Oeufs à la Yvettes “Egg Tart.”  A creamy and fluffy egg tart arrived at the table topped with Spanish shrimp, sliced asparagus, black truffle eggs, shrimp butter, and a sauce Nantua. This was the most delectable dish of the day, and it is a must-order at The Blanchard, if you ask me. 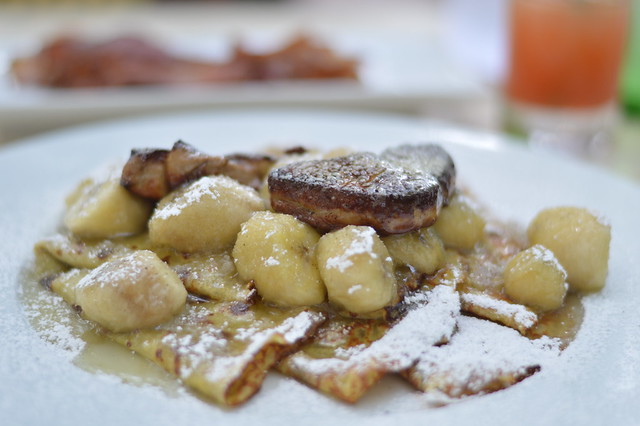 For entrees, Chris and I decided to completely over-indulge while on our culinary journey to France, by ordering the citrus zest crêpes, with the added 4 ounces of seared foie gras – do not judge us! These were absolutely incredible, I tell you. The traditional French crêpes came served with a dark rum spiced banana puree, caramelized bananas, and topped with the juicy seared foie gras and powdered sugar. This dish was the perfect combination of sweet and savory, with all of the components perfectly complementing each other. 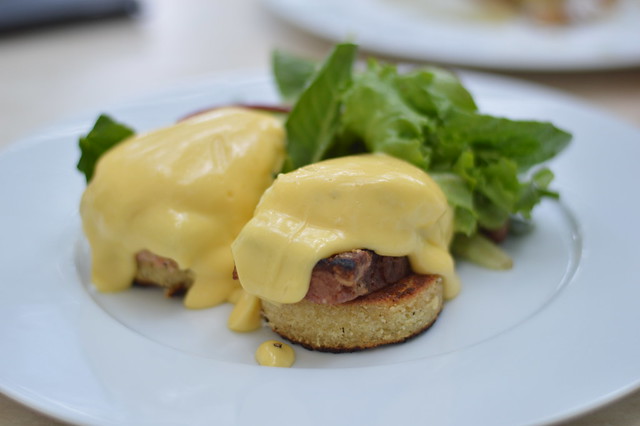 For our final entree, we chose was the Japanese pork belly Benedict, at the recommendation of our server. With so many choices, it was difficult to make a final decision so we went with her suggestion. It might have been that our other dishes were so out of this world, but I was not a huge fan of the pork belly Benedict, sadly. The grilled belly was served with poached farm eggs over toasted brioche, with a dashi Hollandaise, shiso, and parsley. While it wasn’t terrible, it was not the best pork belly Benedict I have had in my life. We enjoyed it, but agreed that it was our least favorite dish of the meal. 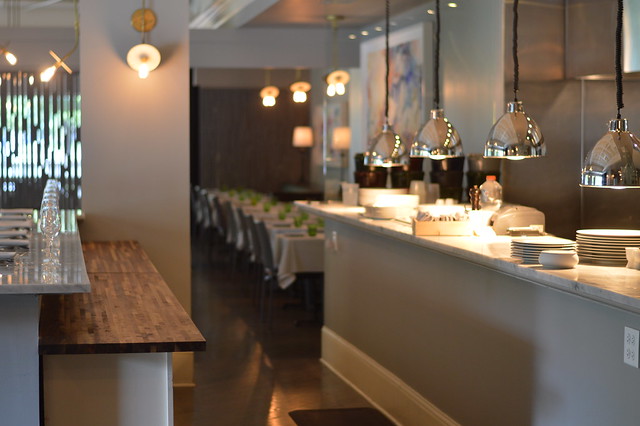 Chris and I have had a long, Parisian love affair with French food during our relationship: some of our best dates were at French restaurants, and we absolutely love a good steak frites. I am so glad that we discovered The Blanchard as the heart and soul in the dishes and cocktails are evident of a classically trained French chef, but with a unique twist on each dish.

I am most certainly looking forward to visiting The Blanchard again for dinner service. 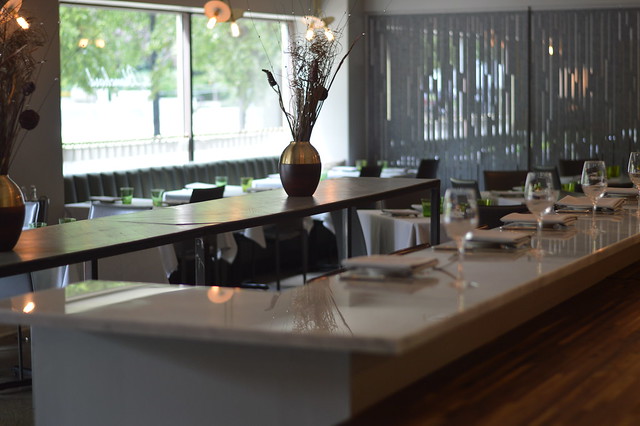 Overall, brunch at The Blanchard was wonderful. While the restaurant is upscale, you can most certainly come and have a relaxing brunch on the patio, and still enjoy the indulgent offerings of the decadent French dishes on the menu. Additionally, I certainly recommend it for a special occasion brunch or dinner with family or girlfriends. The Bitches will definitely be back again and look forward to trying more of Chef Ryan’s dishes.

The Bitches say: A-. The Blanchard is a lovely spot in Lincoln Park for a casual brunch on the Patio, or an upscale celebratory brunch with friends and family. The food is absolutely wonderful, and the cocktails are equally as thoughtful and unique.

The Blanchard serves weekend brunch on Saturdays and Sundays from 10 a.m. until 1:30 p.m.