It has been snowing a lot here in Chicago lately, which gives me little reason to leave my neighborhood. Deciding to get out of the house for brunch after a Saturday sleepover with our younger siblings, Stefan and Ashley, Chris and I led our foursome down the block to our favorite watering hole, The Beetle Bar and Grill.

The Beetle is a no frills establishment; a dark and somewhat moody bar in the evening hours, with the accents of a punk rock-and-roll bar throughout. On a sunny winter Sunday, though, the place was warm and cozy, thanks to the amount of light coming in through the windows at the front and the fireplace to the side of the bar. 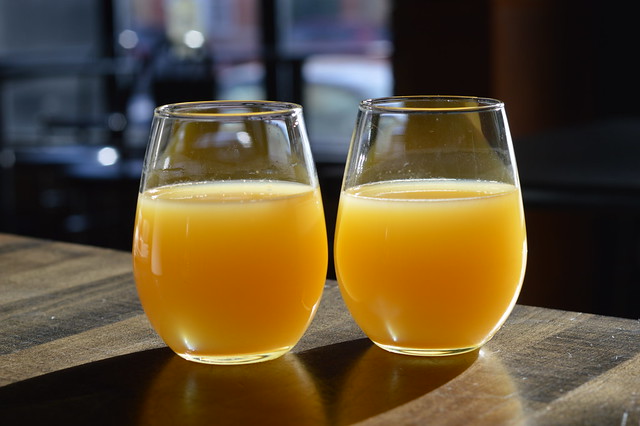 We were starving so we quickly settled in by the table at the fireplace. Being a regular here (truthbetold, during the darker hours of the day) I was fully prepared to order one of my favorite brunch dishes, but of course, we had to start with drinks. Ashley and I ordered mimosas, while Chris opted for a coffee. Bloody Mary’s and mimosas are $5 on Saturdays and Sundays, so naturally this is a brunch win. 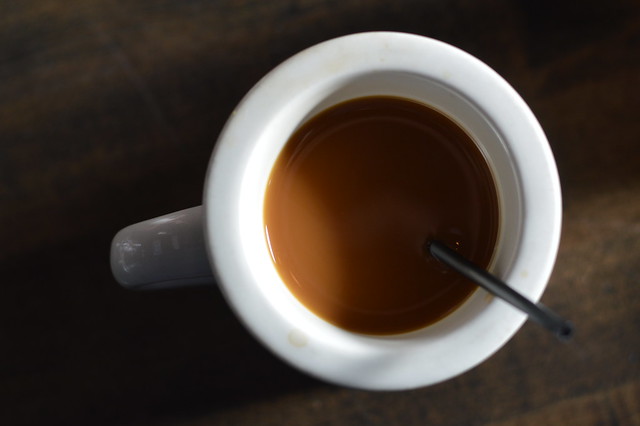 The coffee is from Dark Matter, which is a staple in the ‘hood and can be found at any restaurant or cafe within a three mile radius, at least. Strong and bold, we like Dark Matter, though the taste is an acquired bitter one, in my opinion. It is the crack of coffee. 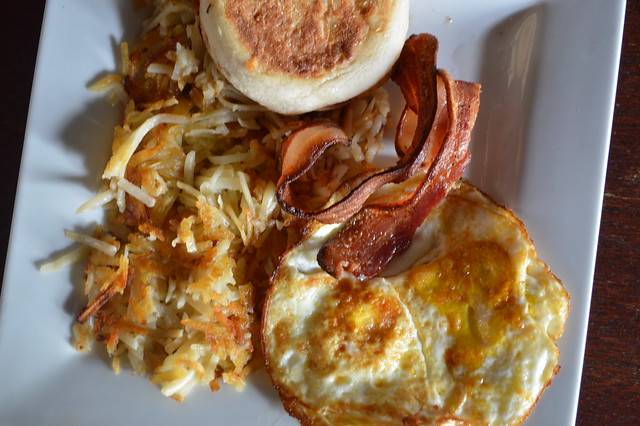 We went ahead and ordered entrees; Stefan ordered the Beetle Breakfast, being the plain Jane he is. Ashley went for the breakfast sandwich, while Chris and I decided to share two entrees; our very favorite breakfast burrito (seriously, it is the best) and the ricotta fig pancakes.

Stefan’s Beetle breakfast came two eggs, bacon, hashbrowns, and toast or an English muffin. While it is a no-frills breakfast, it certainly gets the job done. 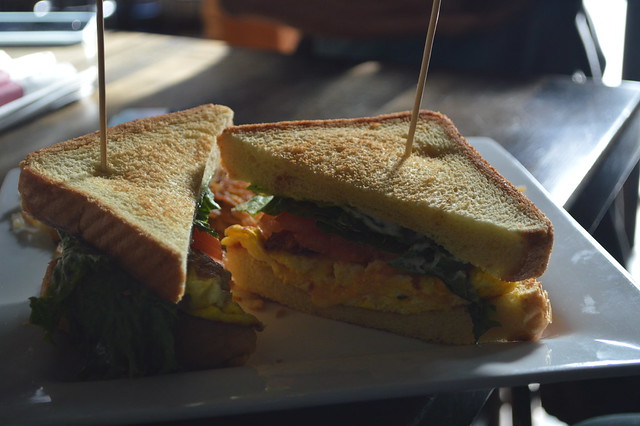 Ashley’s breakfast sandwich arrived to the table and it was a rather large sandwich, to which she was delighted. Huge slices of Texas toast sandwiched a fried egg, bacon, American cheese, and a house made aoili.  Ashley enjoyed it, though she said it was definitely not one of the best breakfast sandwiches she has ever had. It was super basic she noted, and the Texas toast was more filling than the rest of the accompaniments. Also, the menu didn’t mention the addition of lettuce and tomato, so it suddenly was more of a lunch sandwich than a breakfast one. 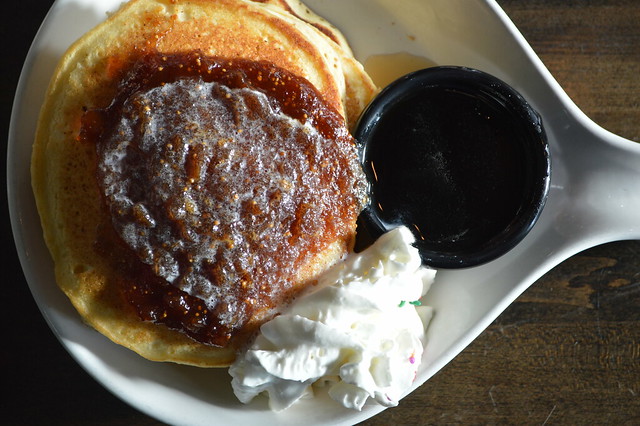 I had never had the ricotta fig pancakes before, and was delighted when the stack came to the table topped with the fig jam, whipped cream and mint. The pancakes were good, though they could have done with less fig jam; they smothered the pancakes in my opinion. Also, I wasnt a huge fan of the can whipped cream. I had hoped for a ricotta whipped cream or another fancy whipped cream. 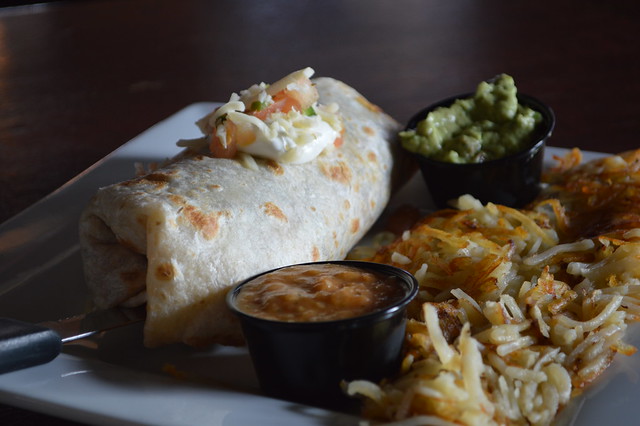 Chris’ breakfast burrito was awesome, per usual. The thing that makes the breakfast burrito so incredible is that it is filled with everything inside of it quite evenly, and it is packed together nicely and doesn’t fall apart. Additionally. you get a perfect amount of scrambled eggs, gooey melted cheese, chorizo inside. We love the salsa that comes with the dish, and the restaurant also gives you guacamole. Score. Topped with a dollop of sour cream and fresh pico de gallo, it is everything you would want from a breakfast burrito. 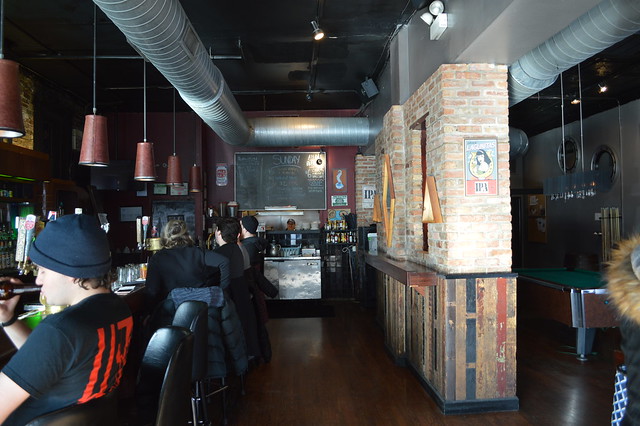 The Beetle is exactly what you would expect from a bar restaurant. Mostly friendly servers with sometimes mediocre service in an atmosphere that is perfect for day drinking and watching sports or playing pool. The restaurant has a closet of board games as well, making it ideal for a lazy weekend brunch.

The Bitches Say: C+. The Beetle is a no-frills brunch spot. The menu isn’t super extensive and offers some pretty basic options, but the food is good and you can’t beat $5 mimosas and bloody Mary’s. If you are in the UKV, keep this spot on your radar for weekend brunch.

The Beetle Bar and Grill serves weekend brunch from 11 a.m. until 3 p.m.