Despite having now lived in Chicago for four years, the city sometimes still seems new to me. I am pretty loyal to a few neighborhoods. While I look to explore many other neighborhoods, there are still many I have not familiarized myself with. This goes for the suburbs as well. Chicago’s gorgeous Lake Michigan shores offers some wonderful neighborhoods and towns to the north and the south of the city.

Evanston is a neighborhood that I enjoy, but because it is quite the hike from where the hubby and I live, I don’t get to go up north as much as I would like. I love the cute shops, vintage stores, and growing restaurant scene in Evanston. The community is home to people of all ages, from families living in the gorgeous brick houses in the neighborhood along the lake, to the young college-aged students that live in the downtown part of Evanston. 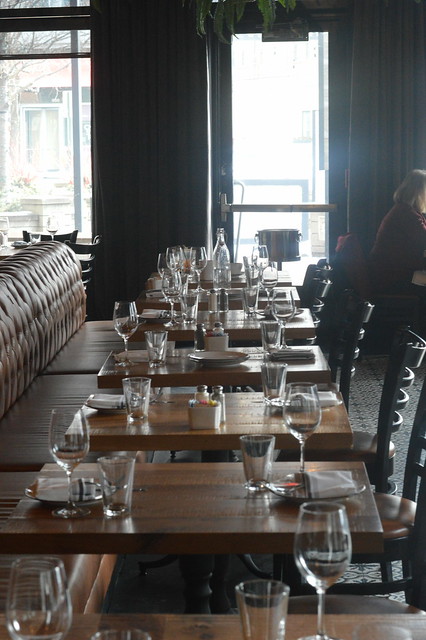 Terra and Vine is a restaurant that has been on my radar since its opening in 2016, so one Sunday, Chris and I decided to head up north and make a day out of exploring Evanston. Black Panther had just come out in theaters, and we knew that in order to get tickets to the film and secure decent seats, we would have to purchase our passes hours in advance, and hang around the neighborhood to be able to arrive well before the movie’s start time and get in line to enter the theater. 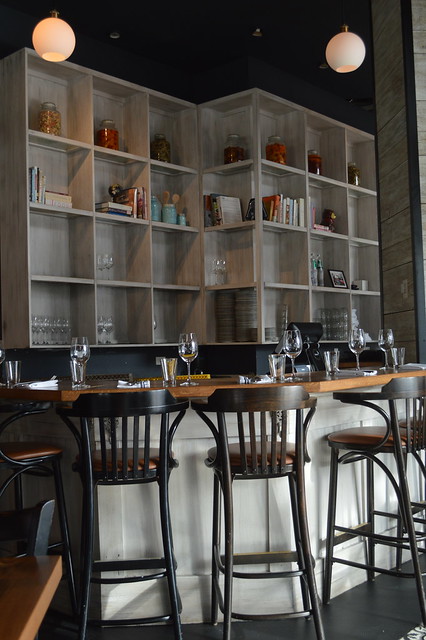 We arrived to Evanston to brunch at Terra and Vine, but not before purchasing our tickets for the 5:30 showing. This left time to walk around Evanston after brunch and check out stores like Blick and World Market, and grab a coffee.

Terra and Vine is the latest restaurant from Alpana Singh, host of Check, Please!. As a fan of Singh’s for quite some time, I was excited to finally check this place out. Offering casual, rustic Mediterranean fare with an Italian emphasis, the menu showcases bright, bold flavors and seasonal ingredients. I love a good Mediterranean brunch, so I was excited.

Considering Alpana is a Master Sommelier, I was really shocked at how limited the wines by the glass were on the cocktail menu. One sparkling, one rosé, five whites, and four reds is nothing to write home about, I think.

It was early afternoon, and while the restaurant wasn’t crazy busy, it still had a good number of parties dining considering it was after the first brunch rush. The dining area is comfortable and relaxing; the two walls of front windows allow for a lot of light, and I liked the open dining setup and the view of the kitchen and line towards the back of the restaurant.

Quite hungry, Chris and I anxiously perused the menu and began discussing what sounded good and what we were craving. It didn’t take us long to come to some decisions for both drinks and entrees, though I naturally had a few questions.

Unfortunately, we were sitting at out table for 10, maybe 15 minutes, before I finally flagged down the hostess and asked if our server knew we were here. Many of the staff were walking around seemingly busy, but it was strange because there were not many people in the restaurant. We couldn’t quite comprehend why no one had been by to even greet us.

Maybe it is a suburban thing, or maybe we are too city-like to want to eat in an hour or less, but the inconsistent attention from the staff was a consistent theme throughout our meal. It was quite disappointing. The staff was certainly nice, but not having been greeted after 15 minutes since or ordered food within 25 minutes of sitting down was painful to say the least. 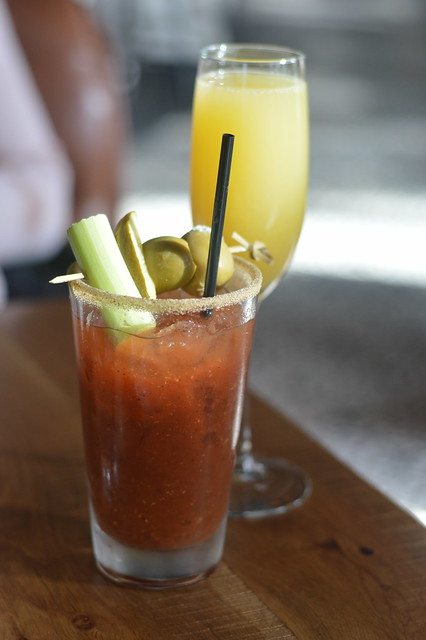 Chris and I were actually scared at one point that despite the gap in time from which we ordered our drinks to when we ordered our food, that our food might arrive before the drinks, just for one mimosa and one bloody Mary. Thankfully the drinks arrived to the table just moments before the food.

My mimosa was oddly super sweet; I asked the server if I could swap to a bloody Mary, for which I was thankful I did because it was really good. 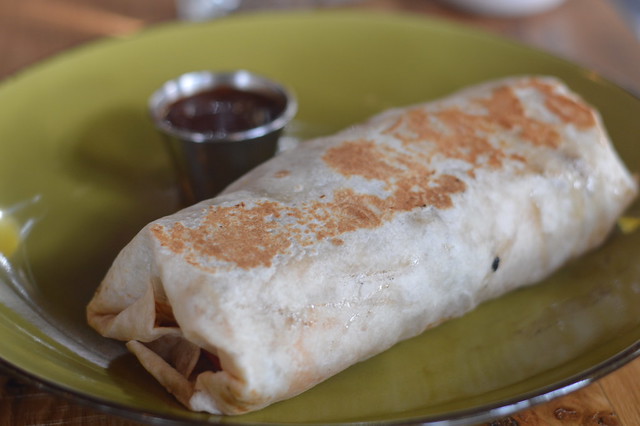 On to the food. Chris ordered the breakfast burrito and I decided to go with the prosciutto toast, and we were going to share. Chris’ breakfast burrito arrived to the table on a large plate, huge in size. Chris’ burrito was good, but when I asked for a side of sour cream I was surprised to find that the restaurant did not have sour cream. It needed a little sour cream, to be honest. 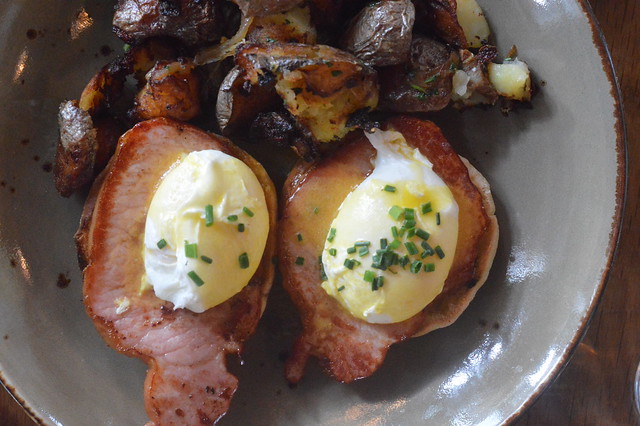 My dish arrived to the table and the appearance of the dish was not as I had imagined. The poached eggs were on top of what was too be thick to be prosciutto. Nonetheless, after snapping my photos I dug in as did Chris.

I was disappointed that my eggs were cold and runny; I had asked for them to be poached a little longer. I soon realized after a few bites that my dish was wrong. I had been served the eggs Benedict.

I decided to enjoy it regardless and maybe just mention it after the fact at the end of the meal, but about halfway through the meal our server arrived at our table having realized his mistake, with the actual prosciutto toast in hand. I did enjoy the prosciutto toast more than the eggs Benedict, but they were both average in my opinion. 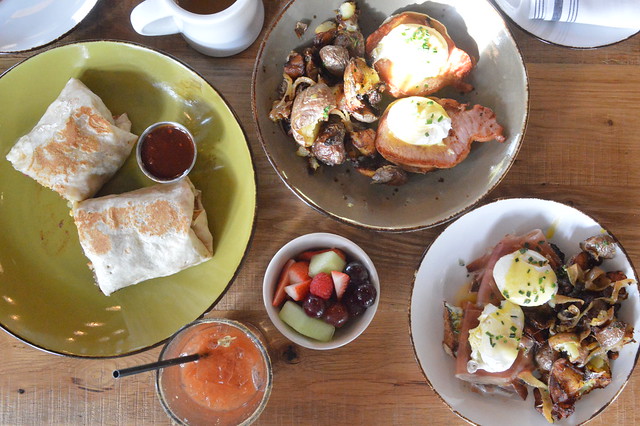 We wrapped up our meal, and after asking for the check, to no surprise we waited another 10-15 minutes for it. Seriously, Chris and I were quite giddy at this point wondering what everyone was doing. We saw that the staff was standing around, running silverware and resetting our table; everything but bringing us the bill.

Our bill arrived and neither my mimosa nor my eggs Benedict were removed from the check, which the server then corrected.

Overall Terra and Vine is a very pretty restaurant. I had high hopes for this spot but I was supremely disappointed, to say the least. From the terrible service, the mediocre food, and the kitchen screw ups, I can say confidently that I will not be back to Terra and Vine anytime soon.

The Bitches Say: F. Sorry Terra and Vine, but we would only recommend brunch at this spot to someone we didn’t like. There is a lot of room for improvement, from the dishes to the service. It is certainly not worth leaving the city for brunch here.