Ten Hope, as the name says, is located at Ten Hope Street in Williamsburg. The restaurant is beautiful with bright white with blue awnings and SO much greenery. It looked and felt like an oasis on this quiet and serene street. 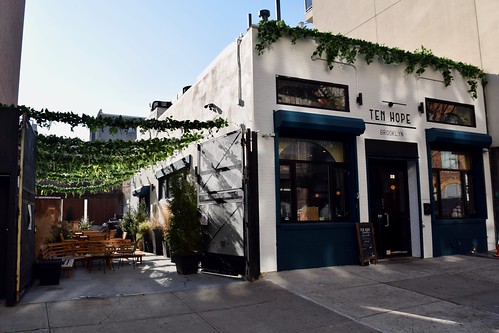 The interior is adorned with velvet club chairs, art, and a strong mid-century vibe. It’s not too big, so I wouldn’t recommend it for a fifteen person birthday brunch, but a family of eight nearby had plenty of space. A kitchen area is also exposed so nosy brunchers like me can get a glimpse behind the scenes. I was grateful they offered to host me and a guest for brunch.

Ten Hope offers an amazing boozy deal with unlimited mimosas, bloody Marys, or screwdrivers for $15 per person. In New York this is a steal, but it you’re not feeling that boozy, ordering a single mimosa is certainly worth your money. They are strong and come with my favorite fresh squeezed orange juice (barely any pulp! A delightful rarity). Tommy, my brunch date, stuck to the fresh squeezed and coffee. Both got the seal of approval from him too. 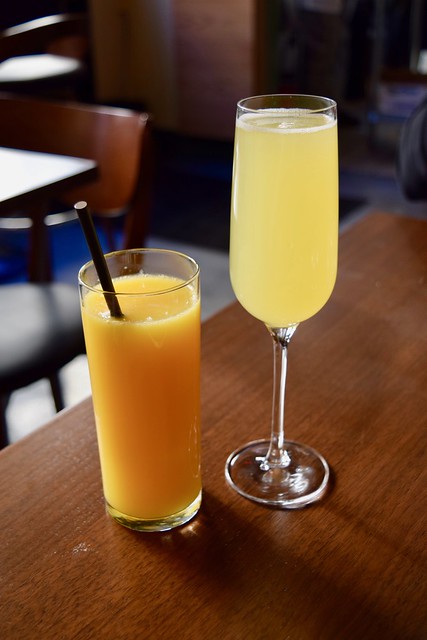 To start, we shared the za’atar spiced bread and dip, at the waitress’ recommendation. We chose the chickpea and sumac dip, but other options include hummus and a whipped feta with pistachios. This bread looked and smelled SO good when it arrived. I had to take my pictures super fast because our mouths were watering. The bread is soft, warm, and salty without making your lips pucker too much. The dip was smooth – a bit thin even – and a cool and savory contrast to the bread. We definitely should have ordered two. 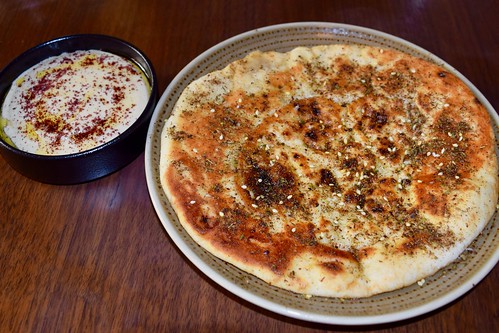 For entrées, we began with the pancakes. They’re made with Greek yogurt and served with roasted apples, whipped butter, and syrup. They were buttery and delicious. The kitchen somehow managed to make a stack that had a slight crunch on the outside but a soft cake-y inside. Tommy said they were some of the best pancakes he’s ever had. 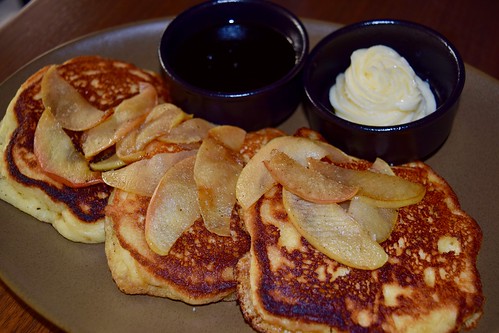 If you’ve read any of my other reviews, you know I am powerless before shakshuka on a menu, and of course I ordered it here. But Ten Hope does it a bit differently. They serve their shakshuka as a flatbread. I am pretty sure the bread was the same as in our appetizer (I was not complaining), plus two eggs and PLENTY of feta. The flatbread was sweeter than most with a perfect little kick at the end. This meal is definitely one of their heartier options. 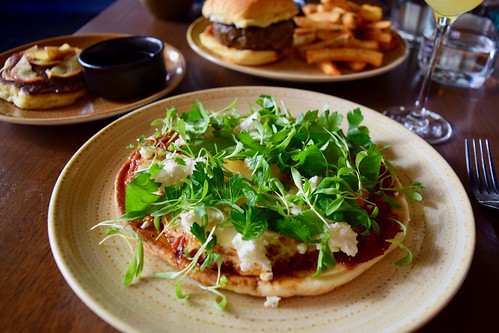 We also tried the Kofta burger, which was exceptional; it’s greasy and delicious like a diner burger, but has a sweet tzatziki sauce on the bottom bun that contrasts perfectly with the sour Kasseri cheese on top. Plus the fries are ridiculous! They were crisped to perfection and came with a green dipping sauce that was so fresh and light that we threw it on the burger. Wow. 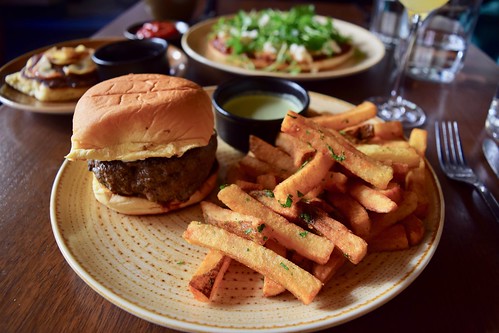 That said, the real surprise of the day came when the chef brought out a plate of their Greek yogurt with gooseberries, pistachios, sunflower seeds, pumpkin seeds, and almonds topped with honey and micro cilantro. Not only is it beautiful, but you can see how every bite had tons of texture. This tastes more like a dessert than an entrée, and was not only the best thing on the table, but easily the best yogurt I’ve ever had. Even if you don’t like yogurt, get it. It’s that good. I’m a yogurt evangelist now? The whole meal was insane, but I can’t stop talking about this dish. 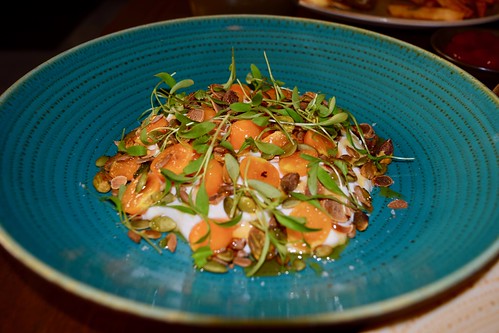