A lackluster curb appeal lends itself to a wonderful surprise-and-delight tactic. Upon entering Supra in Shaw, you are greeted with a large living wall and a fun display made from floating fluff balls—otherwise known as papakha hats—a nod to the restaurant’s Georgian roots. 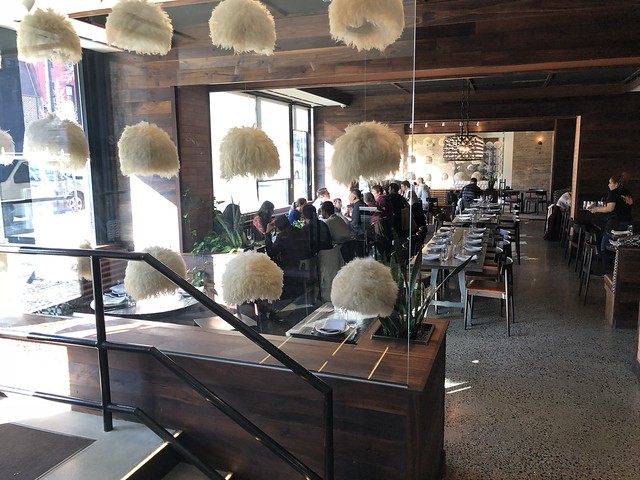 Brunch is not a typical meal in Georgia, so we were pleasantly surprised to learn that Georgian cuisine is known for many vegan and vegetarian dishes from our friendly, knowledgeable waiter.

After coffees and waters, we opted to try two of the more interesting brunch cocktails on the menu. The “PomPom” was made with pomegranate juice, pomegranate wine and Bagrationi NV. It was light and bubbly, a nice change of pace from the mimosa but it was a bit too sour for multiple sips. Luckily, the mimosas that followed were perfectly mixed.

We also tried the Bloody Mariami, which if made with vodka, red tkemali, red ajika, lemon, cilantro syrup, Svanuri salt, and a pickled beet. This is definitely not your regular Bloody Mary. It was super heavy on the spices and was overall a totally unexpected, but pleasantly surprising, cocktail. 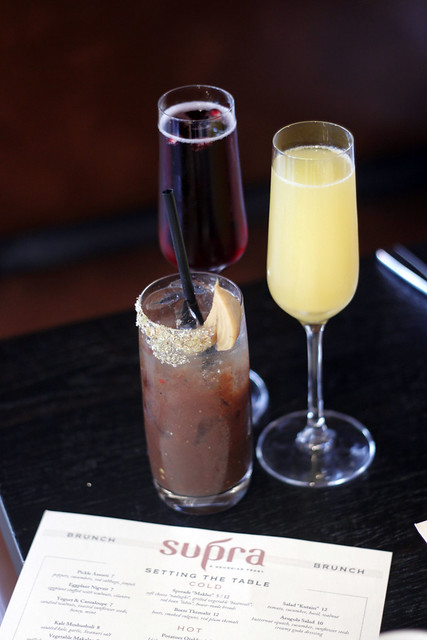 As at any Middle Eastern restaurants, we knew we need to try the dips. Supra’s variety of spreads included “makho,” a soft cheese; “nadughi,” grilled vegetable; “bostneuli” red bean “lobio” and housemade breads. I liked the soft cheese best, but we all had a different favorite. We were upset that there was so little bread to go around, because everyone was going back for seconds. 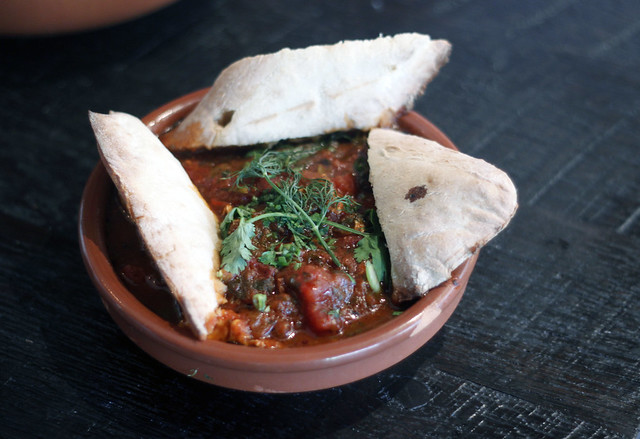 We had a good feeling about the yogurt and cantaloupe. Made with candied walnuts, toasted sunflower seeds, honey and mist, it was perfectly sweet. This dish was a great palate cleanser to start, but would also make for a refreshing dessert. 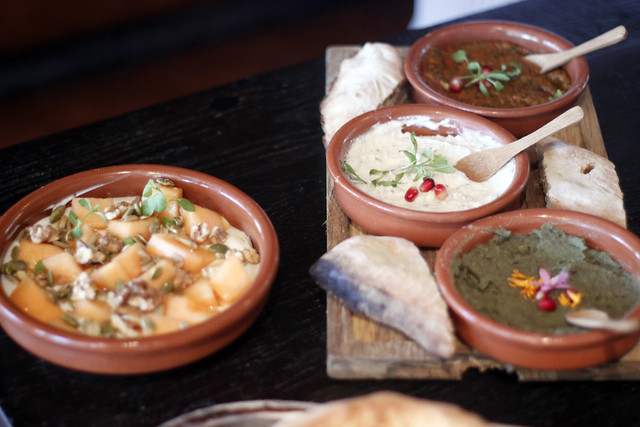 Steph started with the eggplant Nigvzit, thinly sliced eggplant rolls stuffed with walnut “cheese” and pomegranate, topped with cilantro. For a vegan dish, they were truly creamy and delicious. The portion was enough for us each to enjoy one, but we’d gladly have reached for another if it was available.

Never one to pass up cucumbers and tomato salad, we also settled on the Kutaisi which arrived with larger than bite sized mealy tomatoes, walnuts, and a creamy dressing. We weren’t in love with this dish, in fact, we were surprised this type of restaurant missed the mark on what we’d consider to be a staple salad of Middle Eastern cuisine.

Next we shared the Oraguli, essentially a grilled salmon in a creamy tomato-walnut sauce. This was a beautifully light plate. I wish they’d make it an entree portion and add a side. 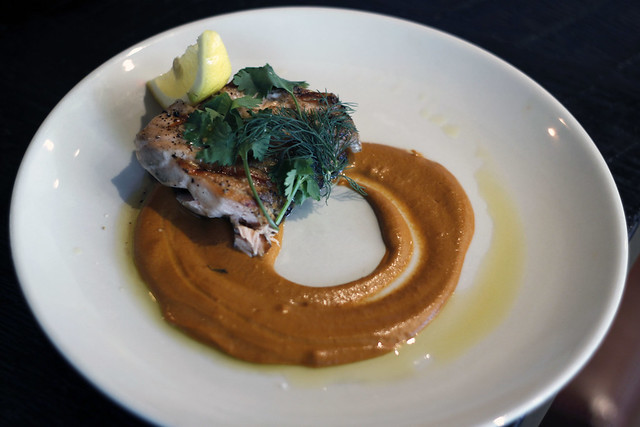 We knew we needed to fill up before a day of imbibing, so both the chicken and grilled vegetable sandwiches were ordered. The chicken sammie had roasted peppers, cucumbers, jonjoli, green ajika dressing and was our favorite of the two. We appreciate the vegetarian options though, with eggplant, squash, peppers, Georgian cheese spread, and spinach. 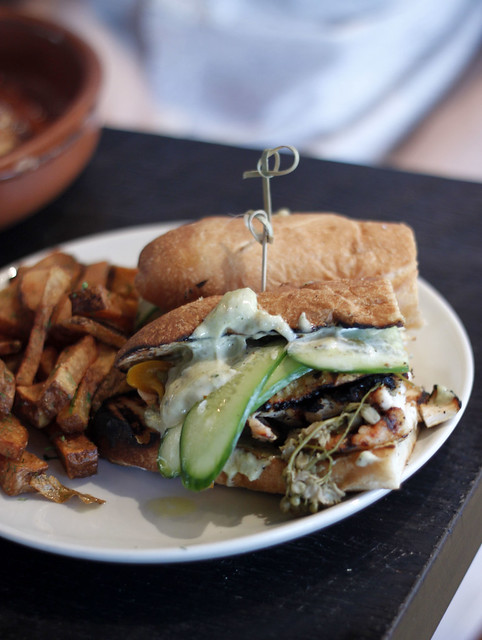 We gotta talk about the side of potatoes. The table raved about these potatoes. Two people had ordered them as sides and they were gone before I could even snag a second tater. They were fried perfectly and dusted with spice.

One of the highlights of the meal was the Ajaruli Khachapuri, a perfectly indulgent brunch dish if we do say so ourselves. The boat shaped bread filled with cheese and egg arrives semi-cooked and with a fork, encouraging you to whip the cheese, butter, and egg together. You wait a few minutes, allowing it to congeal in the bread boat, before consuming. The selection of Khachapuri alone is worth a visit to Supra. 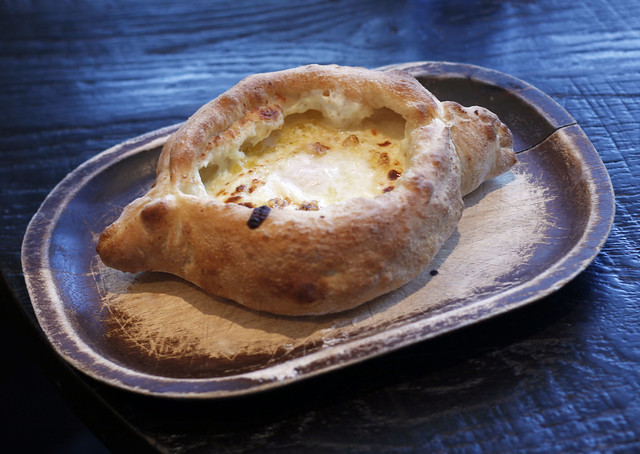 The Khacho cakes had us sounding like a “I can’t believe it’s not butter” commercial. How were these little guys gluten-free? Ricotta, that’s how. Once again, cheese saves the day. The creamy ricotta made these mini pancakes so tasty and moist. We loved the unusual apricot preserves and fresh apple chunks sprinkled on top of the dish. Again, this was a perfect sharing portion. 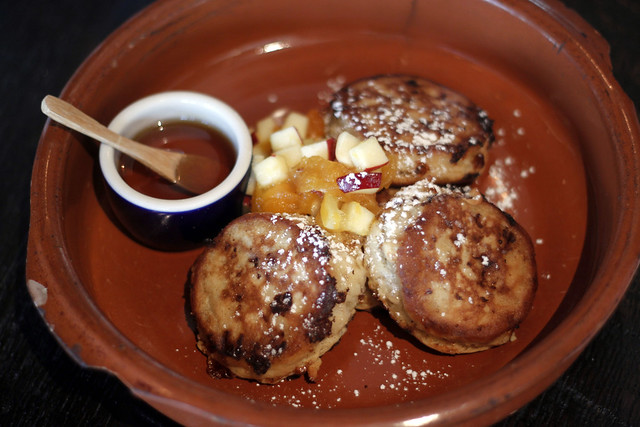 We’re still going. From the egg-heavy portion of the menu, we tried the kupati and feta omelet. A perfectly prepared savory omelet filled with pork and beef sausage, grilled onion, and feta arrived with a nice, light side salad. The Supra cheese omelet was a bit less adventurous, with mozzarella, smoked suluni, and tarragon. (I can’t believe I’m typing this, but it actually had too much cheese sauce.) 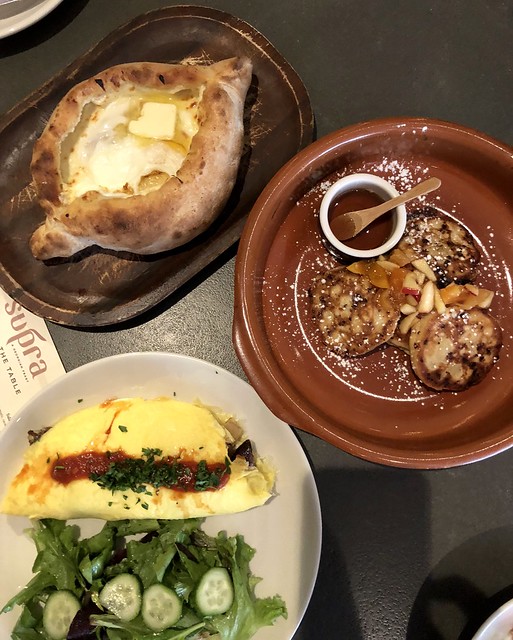 Keeping with the egg theme, the Chirbuli is a lot like shakshuka. Two eggs are baked in a skillet of tomato sauce, with shoti bread. It was ideally portioned, but not the best dish on the table we had tried.

Full and ready for an afternoon of day drinking at nearby Calico, we headed out into the Shaw sunshine.

The Bitches say: B+. Don’t let the unassuming exterior deter you from entering and experiencing a Georgian, vegetarian-friendly feast. Be sure to try the Khachapuri and the Khacho cakes.