I had set up a staycation for me and my new beau at the new MGM National Harbor Hotel & Casino. As we both work and travel quite a lot, and I have quickly decided that staycations and offline time are necessities for survival of both our personal sanities and our budding relationship. Ah, modern romance. 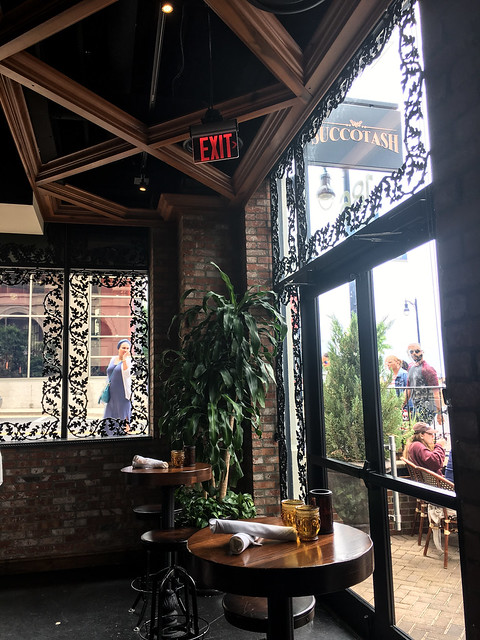 I was very excited to try the slew of restaurants from big-name chefs at the new MGM Hotel and casino: Voltaggio Brothers Steakhouse, Marcus Samuelson’s namesake brasserie, and Fish by José Andrés. But, I had also had Succotash, a Southern spot in National Harbor by Chef Edward Lee, on the top of my list in the D.C. area. So, we headed to National Harbor. As we’re both a bit snobbish, we were both initially put off by the strip mall vibes and big box brands at National Harbor. I had flickers of anxiety as we walked from the parking lot to the restaurant: “Is he going to judge me if this brunch is terrible?”

We walked into Succotash, which is a beautiful space with wrought-iron details and lots of greenery a nod to beautiful Southern side streets in Charleston and New Orleans, I have no doubt. The expansive restaurant has beautiful wood floors and cozy wooden booths, and a beautiful bar area to the right. The space was packed with families of all shapes and sizes brunching—it was a great, busy, convivial vibe for a Sunday at noon. 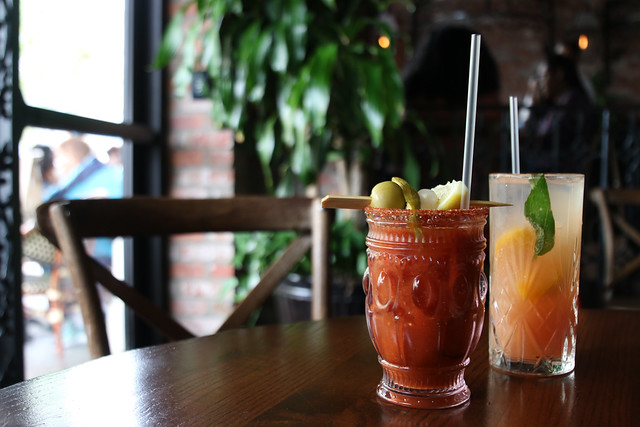 We were greeted by a friendly team at the host stand and seated in a cozy, round booth looking out onto the patio. As we’re both photographers, we were instantly pleased with the perfect lighting.  After getting situated, we began to peruse the brunch menu, which is rather large and equally expansive. The menu offers dozens of Southern appetizers like fried green tomatoes and skillet cornbread, and an equally large amount of mains, like biscuits and gravy and a pulled pork sandwich with collard greens. 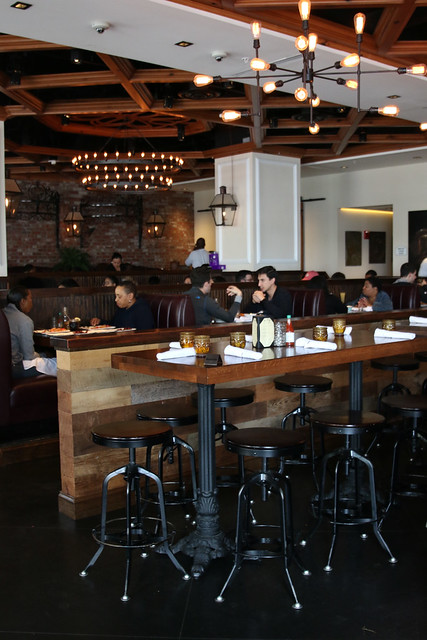 We were both excited to be cozied up together in a booth and to be presented with such a wide array of delicious food. Ah, young love between two hearty eaters. We managed to agree that neither of us love collard greens; and that the chicken & waffles were a must order. 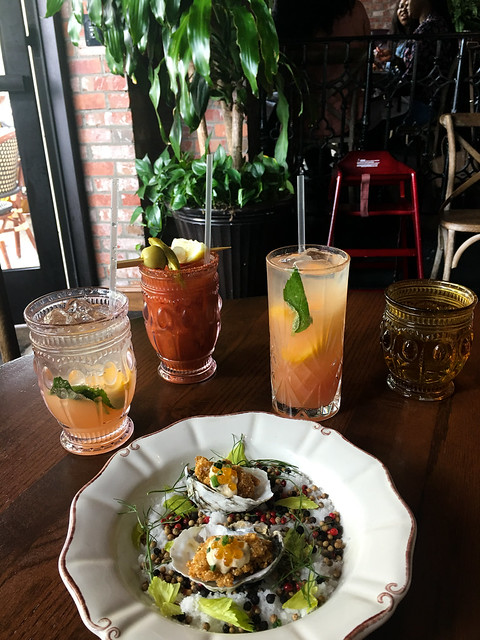 We began with cocktails, of which Succotash has a great selection: Bellinis, mimosas, and an Asian-inspired Bloody Mary, as well as an Old Fashioned breakfast with coffee, bourbon, and bitters. I ordered the Belle’s punch, a pink confection of vodka and bubbly—it was light, flavorful, and lovely. Beau ordered the Southern Bloody, which was absolutely packed with flavor and one of the best Bloodys we’ve had to date.

We started with the pecan sticky buns—because, obviously there is no better way to begin a Southern brunch. Served in a skillet, these classic pecan buns were divine. We had to restrict ourselves from going back for seconds. 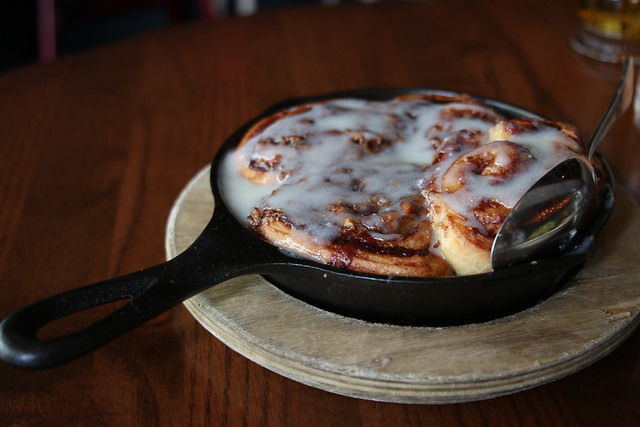 We also loved the classic interpretation of deviled eggs, made with Dijon mustard and liverwurst. Fluffy and packed with flavor, these eggs were a great, shareable starter. 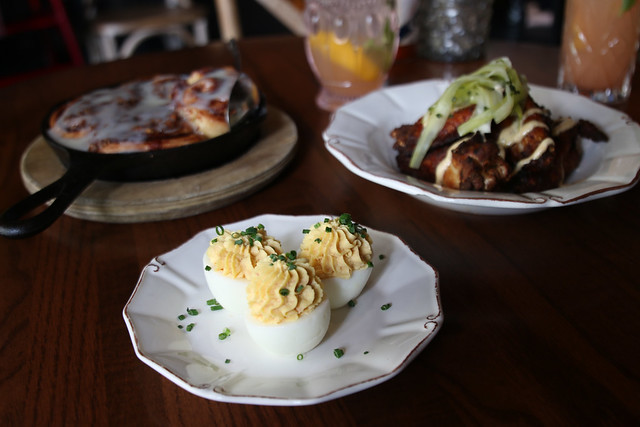 The chef sent out cornmeal fried oysters topped with a trout sauce and roe, and served on a bed of sea salt and peppercorns.  We could not have been more impressed with the presentation and the flavor. 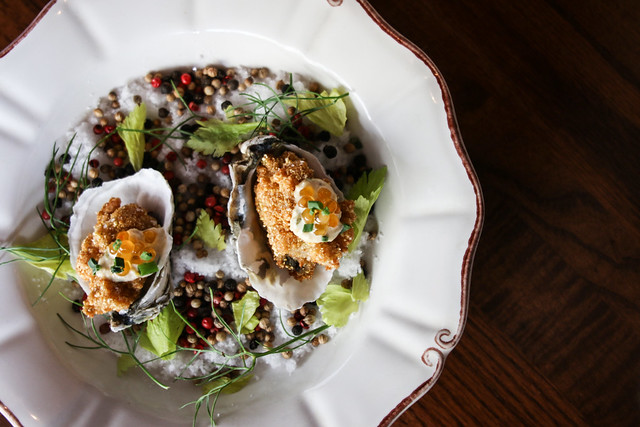 The chef also sent out his chicken wings, which to us implies that this is one of the dishes of which he is most proud. After our first bites, it was easy to see why. These divine, crispy wings reminded me of Asian fried chicken—with such a flavorful exterior and moist chicken meat with each bite. They were topped with a celery slaw and a white BBQ sauce, which absolutely blew our minds. Given that neither of us has ever had white BBQ sauce, it took us awhile to identify the sauce—but we knew it was damn good. 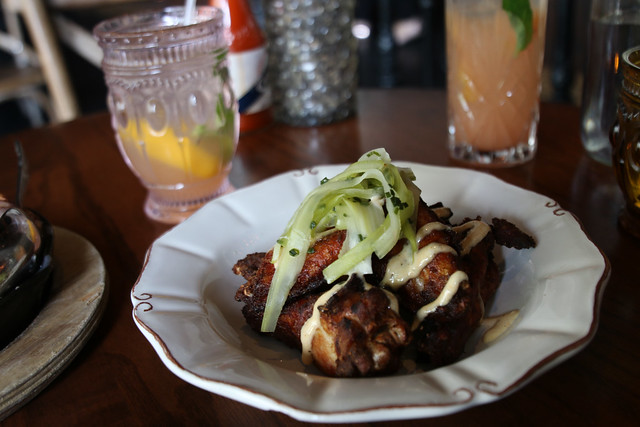 We had trouble deciding between the pimiento cheeseburger, served on a brioche bun with slab bacon, and the shrimp n’ grits. We went with the shrimp n’ grits at the waiter’s recommendation. It was actually our least favorite dish, though we did enjoy it. The egg was perfectly done—putting runny yolk all over the enormous shrimp, roasted portobello mushrooms, grits, and arugula. 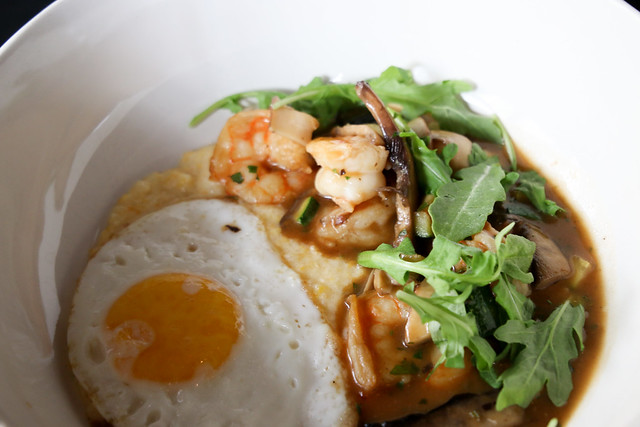 We loved the chicken and waffles: the fried chicken was moist on the inside, and fried and crispy on the outside. The waffles had shaved Manchego atop them—and the maple syrup was Bourbon flavored. Both of these details added an elevated, delicious touch that we so appreciated. 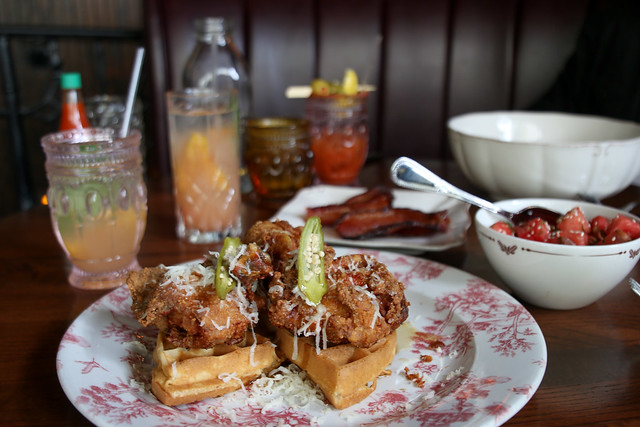 Of course, I always order the bacon, and I couldn’t pass up the maple-glazed slab bacon, which tasted just as good as it looked and sounded. We appreciated that it wasn’t overly sweet or caramelized, but just right.

The Bitches say: A. Inventive, expert takes on our favorite Southern dishes, with craft cocktails and friendly service. It’s worth a visit to National Harbor for some Southern cookin’—and much quicker than a trip down highway I-95 to the Carolinas.