Stella Barra the popular upscale pizza restaurant adjacent to the equally popular Summer House Santa Monica, recently debuted a new brunch buffet. So a few weekends ago, Chris and I decided to check it out.

We had errands to run in Lincoln Park, so it was a perfect day to swing by; we didn’t arrive until closer to 1 p.m., which was probably for the best, because both restaurants are known for having long waits. This particular Sunday, the weather was especially nice for fall in Chicago, so much so that the patio was completely full at Summer House Santa Monica. 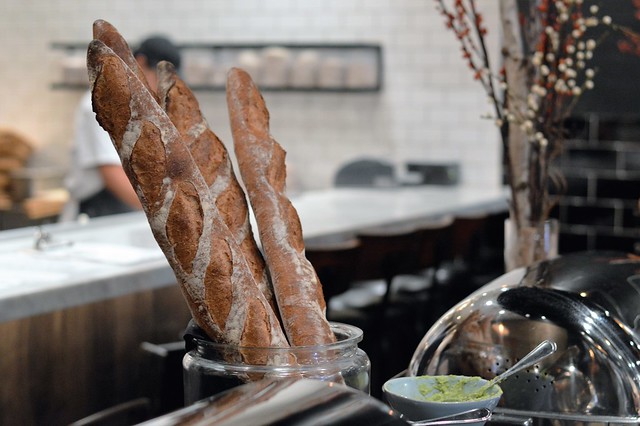 We were greeted by the host and promptly seated at a high top. The restaurant was bustling, and there were lots of families. Our server came to our table and we informed him we would be doing the buffet, and promptly ordered a coffee, mimosa and a Bloody Mary to kick off our meal. Our server took our beverage orders and told us we could head over to the buffet whenever. 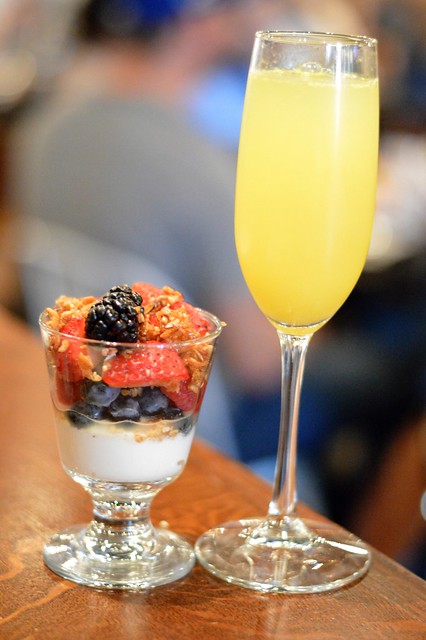 Chris’ coffee was really good, piping hot and strong. The mimosa was solid. My Bloody Mary was also equally delicious. It had a little bit of a kick, but was the perfect amount of savory and spicy. 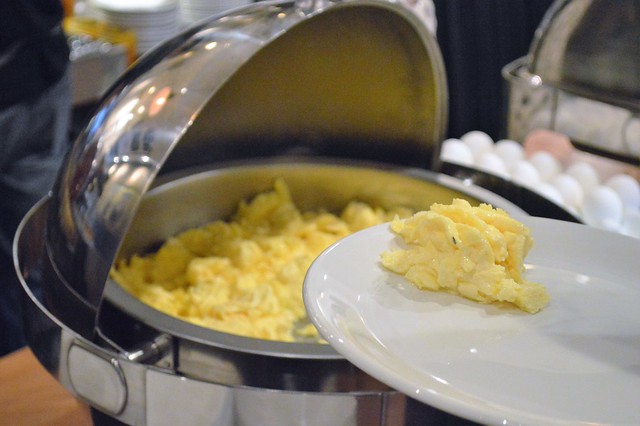 Upon approaching the buffet line, I must say the first thing I noticed was how small it was. It was just a few lined up tables in the back with breakfast offerings at each table. The first were scrambled eggs and eggs whites. 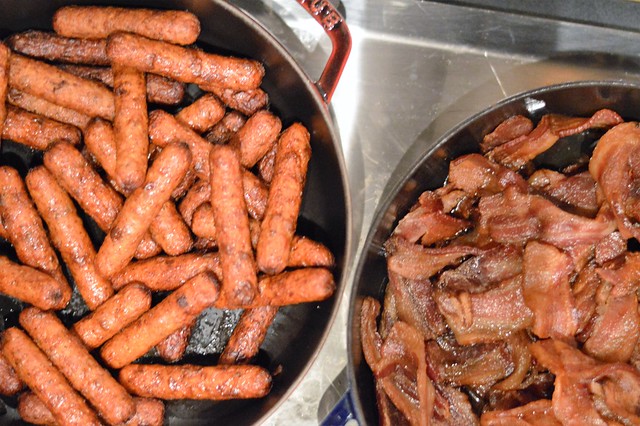 Next up were a breakfast strata, bacon, sausage, enchiladas with salsa and other topping offerings. After that there were some cute fruit and yogurt parfaits, as well as some sweet offerings such as sticky buns and Brioche French toast, as well as a bread and butter station. 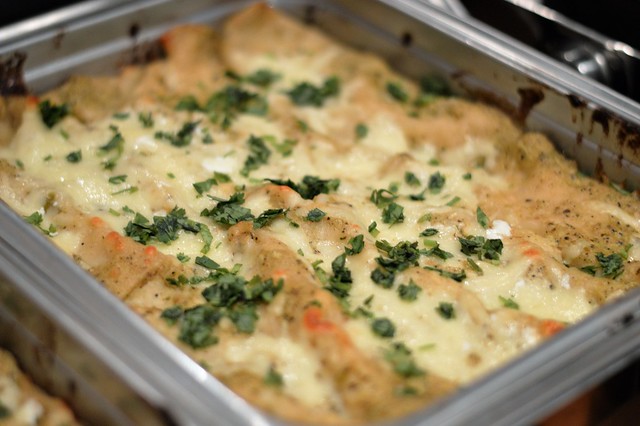 At the very end, there was a smaller table with a sign that said “kids table,” where they had crispy bacon and dollar pancakes. Clearly, this is the place to bring the whole family as it was scattered with loads of parties with children. 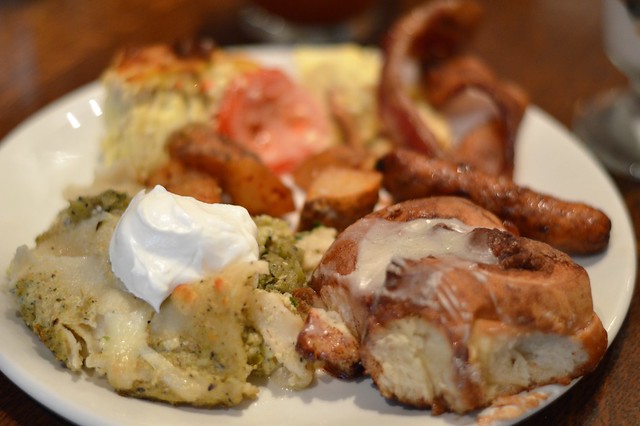 The breakfast strata was made with charred tomatoes and cheddar. It was okay; moist thanks to the big drops of bread throughout the dish that absorbed all of the yummy eggs and milk, but it lacked seasoning. The scrambled eggs were watery and mediocre, as well. 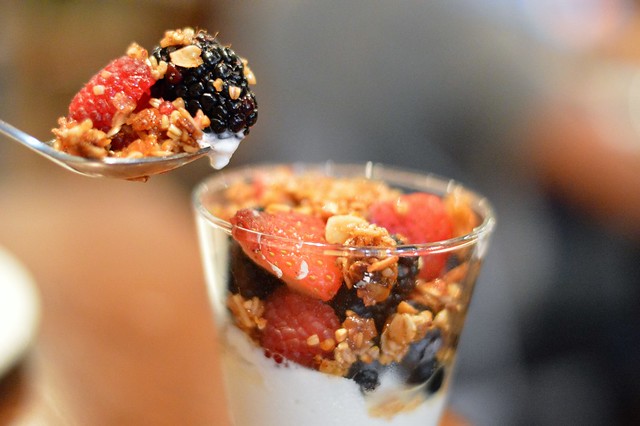 The yogurt parfait was quite delicious, as was the sticky bun. My favorite though, were the enchiladas. Boy, were they amazing! They were roasted corn and poblano enchiladas, and I added a salsa verde on top. Talk about delicious, these are just so good. Chris and I both enjoyed them greatly, and eventually went back for a big heaping of seconds. 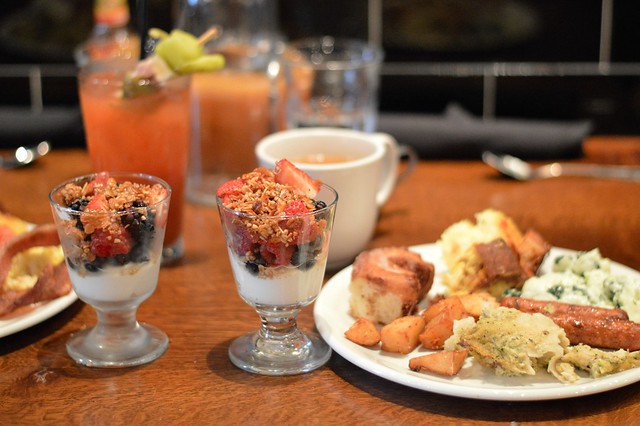 Overall, for around $20, I’d say the buffet is just okay. It is definitely on the less expensive side of price points for a buffet, but I’d prefer if they made it more expensive for people and stepped up the brunch game with some better offerings (read: breakfast pizza!) to have more than just mediocre items.

The staff seemed very busy, but it was nice when the manager came over to say hello. He was super friendly and when he asked how our dining was, I was sure to mention my fabulous, one-of-a-kind breakfast pizza idea.

The Bitches say: C. Stella Barra has a reasonably priced breakfast buffet, and good breakfast cocktails, but some of the breakfast items were a hit, and some were a miss. This is a good spot for family gatherings or group brunches.

Stella Barra serves weekend brunch on Saturdays and Sundays from 10 a.m. until 2 p.m.