Over recent years there has been an influx of Australian style and owned restaurants in New York City. The newest addition to the metropolis grid is Sonnyboy.

Created and opened just a few weeks ago by the team at Greenwich Village-located cafe, Banter, the boys seem to have mastered the equation. 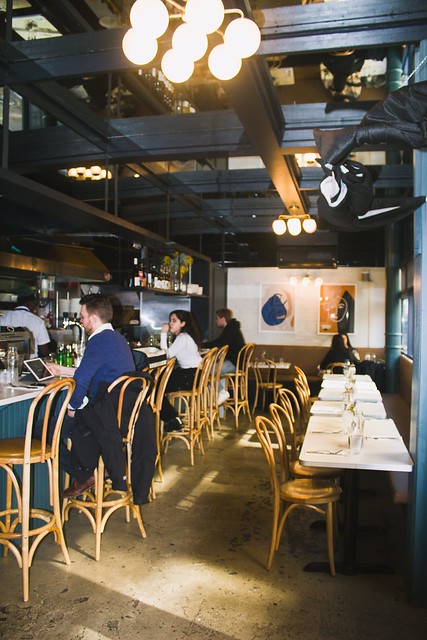 First thing you notice about Sonnyboy is how clear and open the space feels despite being quite small. This is thanks to large windows spanning the whole storefront that let lots of light in as well as an open-style kitchen where you can see everything being prepared right in front of you.

The concept is to create an interactive atmosphere for both the staff members amongst themselves as well as customers, especially those sitting at the bar. It’s not small, it’s intimate. 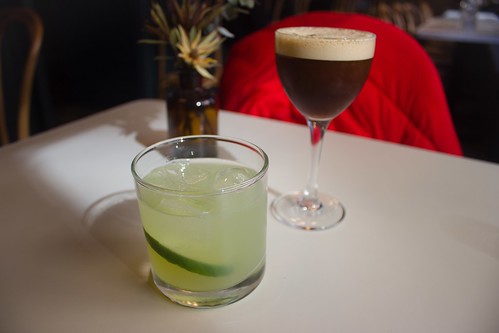 Sonnyboy offer a fair range of original and interesting cocktails, so naturally we were all over it. There was talk of an award-winning Espresso Martini (crowned by online magazine Punch) so the Bitches absolutely had to test drive that one. Boy, it did not disappoint. Mixologist Stefano D’Orsogna has mastered the ratio and ingredients on this one. Equal parts sweetness and bitter coffee, it develops an enticing aroma with a healthy covering of froth on top. Do yourself a favor and try one!

In search of something refreshing and gin based, we went for the one they call T-Shirt Weather (wishful thinking over the winter months in New York City). This one contains Four Pillars Navy Gin (another award-winning Australian export), vermouth, cucumber, lime, and absinthe. Served in a tumbler glass on ice, the drink was refreshing, subtle, and went down easy. For anyone who likes notes of cucumber in their beverages, this one is a good shout.

Now, what you all came here for … the food. 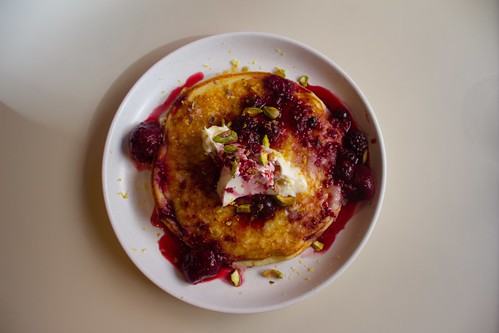 Being the sweet tooth that I am, the moment I laid eyes on the word “hotcake,” I was accounted for. Accompanied by mascarpone, maple syrup, mixed berries, lemon zest and pistachios, it sounded amazing. Not to mention it is gluten free!

Upon delivery the most noticeable thing is the colorfulness of the berries scattered over the top and the sauce running in all directions. You really do eat with your eyes. 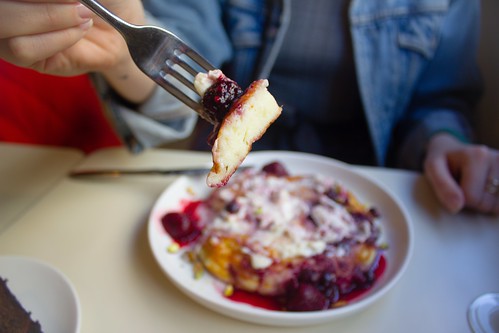 While it is a hotcake—singular—don’t let this fool you. It’s thick and fluffy with texture, and a little less doughy than a regular pancake. It doesn’t taste like your run-of-the-mill hotcake either. The lemon zest comes through and acts as the perfect balancing note. The berries are bountiful, and the pistachios  bring some satisfying crunch to the texture as well as more subtle flavoring. 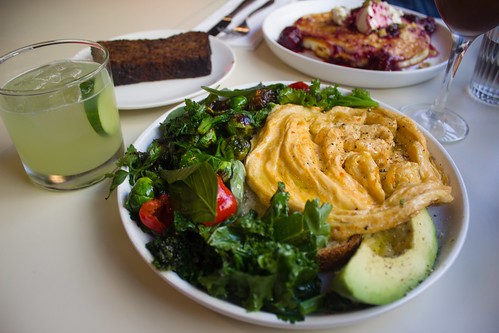 Of course, the perfect meal is all about balance so we also opted for the Harissa Folded Egg. It’s not an omelet but also not not an omelet. The anti-omelet I guess you could say, in which the Brussels sprouts, basil, avocado, and bell peppers aren’t mixed into the egg, but rather are on the side. Not only does it look better that way, but it also means you can eat everything at your own will. The harissa stirred through the egg adds the perfect amount of flavor and personality to an otherwise standard dish. We’re learning that the key to everything at Sonnyboy is to serve the dishes you know but do them the Sonnyboy way.

We were informed that the banana bread is made in house with gluten-free flour and is nut-free as well. This is served as the perfect sharing item and comes out quickly. So naturally we put an order in for a slice of that too. Do note: it doesn’t come warmed nor with any spreads but they are more than happy to accomodate any preferences. 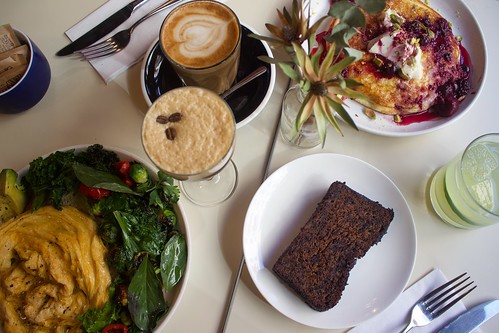 The Bitches say: four Champagne flutes. Sonnyboy is a solid choice for quality dishes at great prices, the food leaves you satisfied and full but not feeling like you need to retire to the couch. The drinks are well thought out, designed and executed — that Espresso Martini is seriously good! The atmosphere is relaxed but holds a chicness to it that means it can hold its own amongst a notoriously competitive restaurant scene. The Bitches highly recommend a visit.