As soon as the invite hit my inbox for the The Vibes Unlimited Bashment Brunch at Solomon & Kuff’s Rum Hall, I immediately RSVPed. This special brunch occurs monthly and is focused on exploring the multiple sounds and genres of reggae. In fact, I learned bashment is the word for party in the West Indies so this special brunch combines pan-Caribbean cuisine with good sounds, people and cocktails with a prix fixe menu and bottomless rum punch/mimosa option. 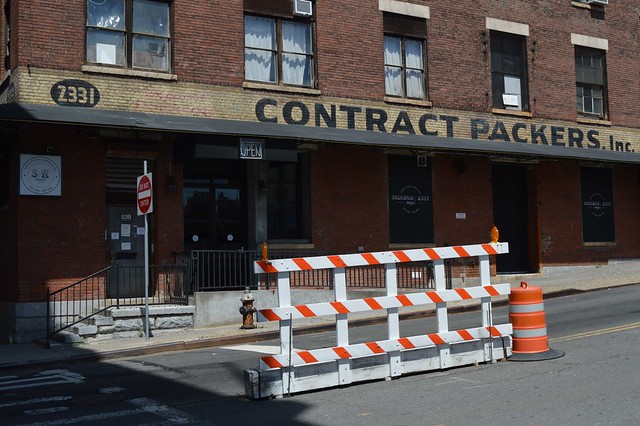 At first I was a little deterred by Solomon & Kuff’s West Harlem location, but once I got on the 1 train it was an easy straight shot. It was a great reminder that there’s so much to explore in New York and it really requires minimal effort to get there once you commit to it. 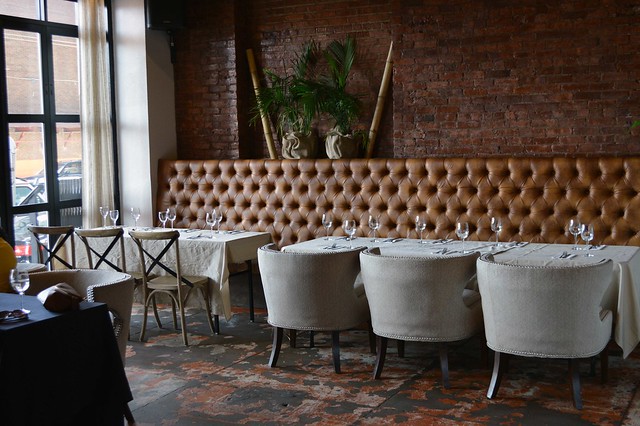 I was joined by my boyfriend Robert and his friend from back home, Colin. We were excited to explore an unfamiliar part of town for a friend. The restaurant in located in a huge industrial loft space in West Harlem’s Manhattanville Factory District, close to Dinosaur BBQ and the infamous Cotton Club. We were immediately drawn to funky artwork, the reclaimed patterned wood walls, and an impressive selection of about 100 international rums—this after all is a rum hall. 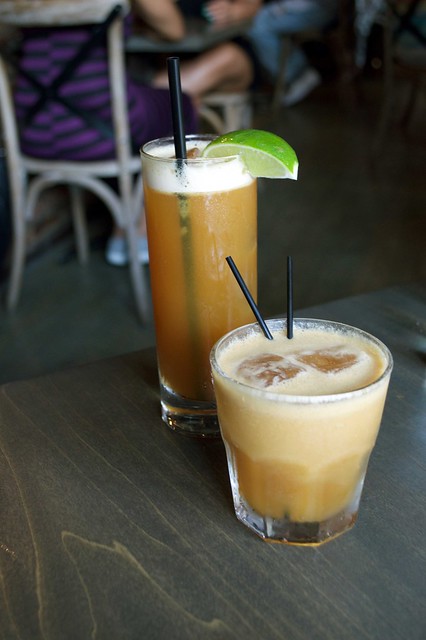 During brunch, diners have the option of ordering from the $32 prix fixe menu, which includes a drink, a starter, and a choice of entree with the option to make the brunch fully bottomless for an additional $20. You could also order a la carte and add on the bottomless option. From the looks of our fellow brunchers’ tables, it looked like pretty much everyone took them up on the prix fixe option and were fully enjoying a leisurely afternoon of bottomless drinks and grooving to the live reggae. 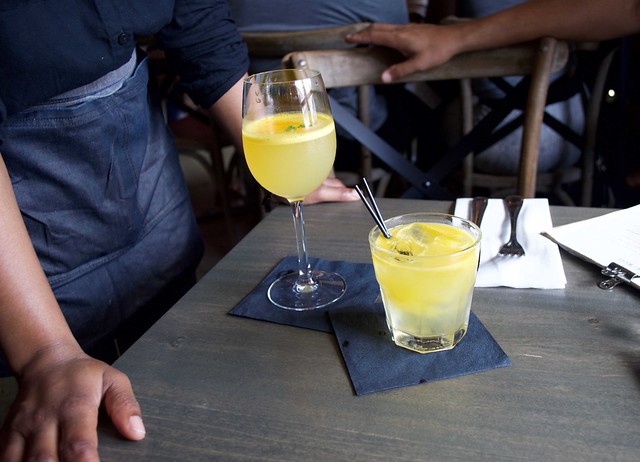 Solomon & Kuff’s has an impressive rum-centric bar program so we sampled a few cocktails, for the sake of journalism of course. In the end, the Bashment Punch, which is included in the brunch prix fixe as well as the boozy deal, was one of our favorite sips. The cocktail, containing rum, pineapple juice, mango puree, lime juice, and orange bitters, sounded too sweet for my liking on paper, but it was actually quite tangy, drinkable, and alcohol forward—it definitely packed a punch. 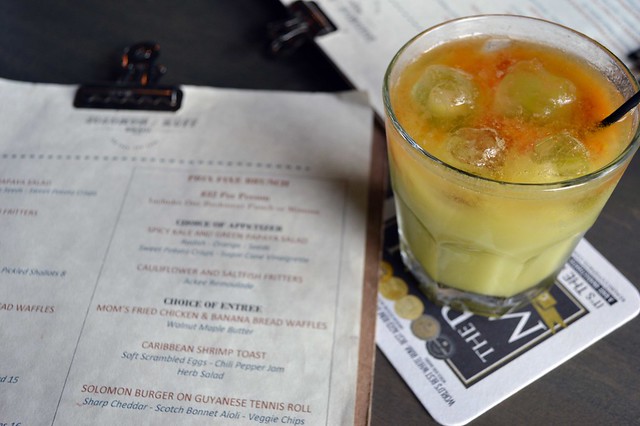 This brunch was on the house so we ordered a smattering of items off the menu to split, although most of our picks are included in the prix fixe. 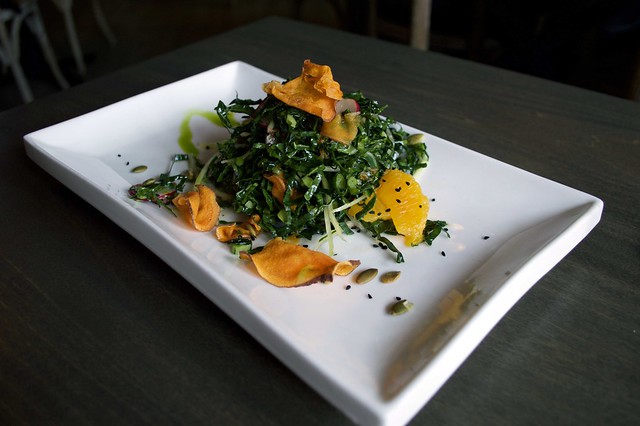 From the starter menu, the spicy kale and green papaya salad definitely caught our eye. The gorgeous green presentation matched the enticing menu description; a pile of greens was served with orange segments, pumpkin seeds, and topped with a sugar cane vinaigrette. This salad sounds simple, but was refreshing and had a surprising amount of spice, which was welcome among our crew. We also particularly enjoyed the crunch from the pepitas. 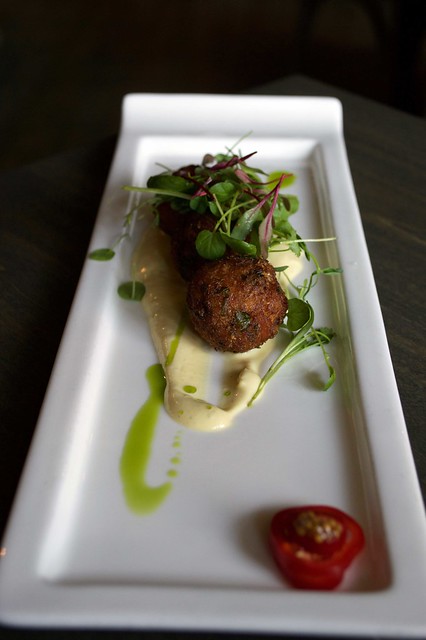 The cauliflower and saltfish fritters are featured on the prix fixe menu and our server ensured they were a must try. I had imagined fried cauliflower heads so was surprised to see these prepared as mixed fried balls with cauliflower and fish, similar to risotto balls. The fish flavor was definitive, but not in a bad way if you’re a seafood lover. 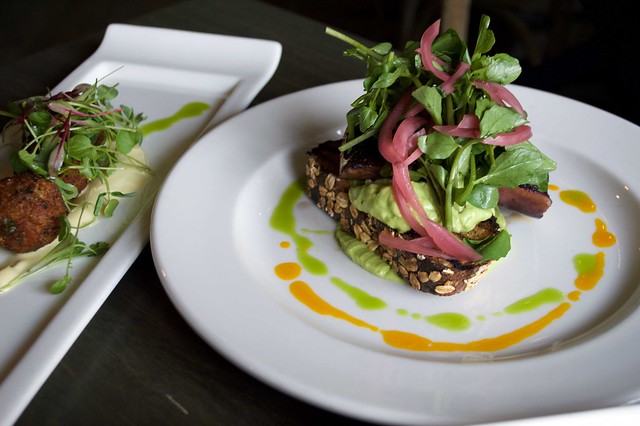 Finally from the starter menu, we had to order the jerked Japanese eggplant, out of genuine curiosity since none of our party had ever seen this on a menu. Generous slabs of eggplant were slathered in jerk seasoning and covered with avocado mousse, watercress, and picked shallots, atop a few pieces of toast. This was a fun, Caribbean interpretation of avocado toast and we loved it. I really appreciate when a vegetarian item is a showstopper, rather than a sad alternative to a meat-centric item. 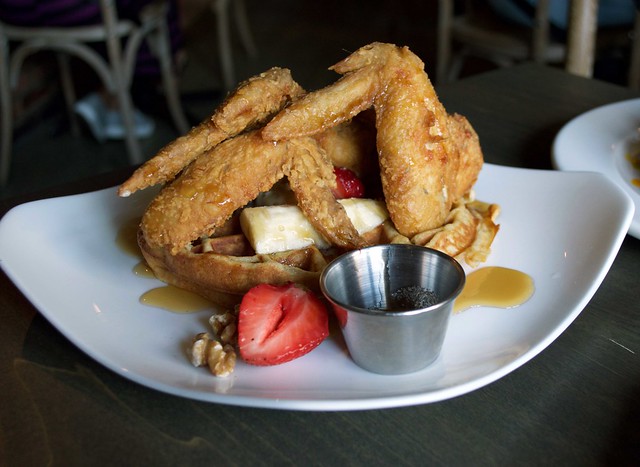 Practically every group around us had an impressive platter of chicken and waffles arriving to their table, so trying Mom’s Fried Chicken & Banana Bread Waffles was a no-brainer. The fried chicken wings looked pretty funny piled on the plate, but we got past the appearance and dug into the moist, savory poultry. The chicken was delectable and didn’t have too much breading, differing from many subpar chicken and waffles of brunch past. We also loved the banana bread waffles with walnut maple butter; an interest and tasty twist on a standard brunch dish. 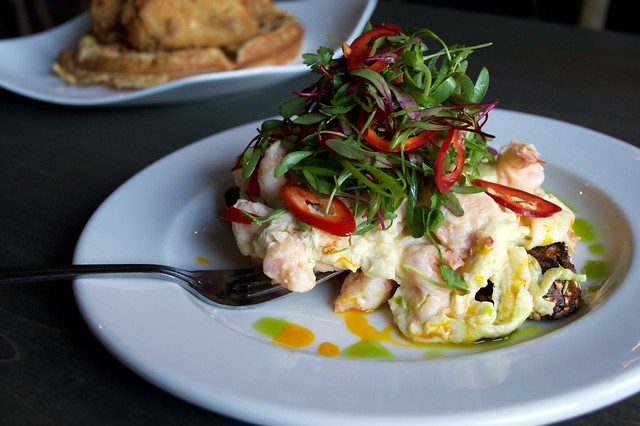 I was joined at brunch with two hungry, slightly hungover guys so the entrée ordering continued with the Caribbean shrimp toast. Thick cut bread was stacked mile high with soft scrambled eggs, shrimp, chili pepper jam, and herb salad. This main dish was bursting with flavor and quite filling. Our only critique was there was so many toppings, it resulted in a really messy bite. We weren’t sure whether to just shove it in or fork n’ knife it. 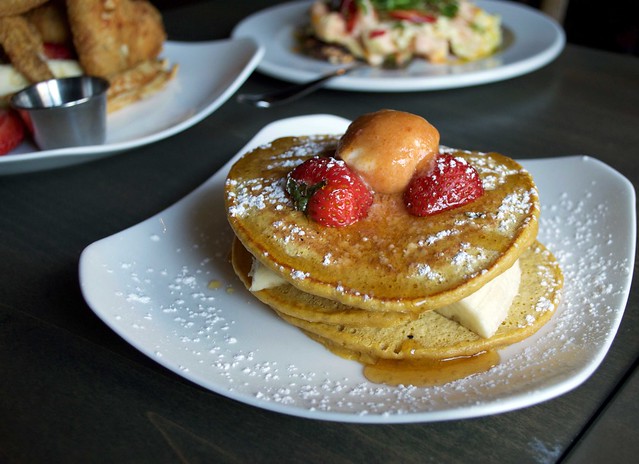 To end our meal on a sweet note, the owner insisted that we try the sweet yam pancake, a specialty of the West Indies region. Thin layers of almost crepe-like pancakes were sandwiched between fresh fruit and dusted with a generous layer of powdered sugar. This light side was perfect for sharing and was the perfect dessert bite, but also wasn’t too sticky sweet.

Brunch parties can be a gamble, but we struck it lucky at Solomon & Kuff’s. Although it can be out of the way for some, it was worth the subway ride for a unique experience in a part of town I rarely explore. It was especially memorable for our friend Colin, in town from San Francisco, and we gave it all two thumbs up.

The Bitches say: A. Awesome Caribbean vibes, great cocktails, and flavorful, inventive brunch fare in West Harlem. A welcome addition to this up and coming neighborhood!