When I moved to New York, I promised myself I wouldn’t become a “Manhattan snob.” But unfortunately, I kind of let it happen. Gone were the days when I’d happily suggest taking the subway up to the Bronx Zoo, or venture to the outskirts of Coney Island to tour a brewery. As soon as I realized this, I immediately kicked myself and vowed to plan a Saturday dedicated to exploring the various neighborhoods of Brooklyn.

We planned to swing by the Brooklyn Museum, meander through the Brooklyn Botanical Gardens, and end our night watching football at local beer and food hall, Berg’n. But priority number one of the day was to find somewhere to brunch. SoCo Brooklyn had recently invited us in, so I figured this particular Saturday was the perfect opportunity to take them up on their offer. 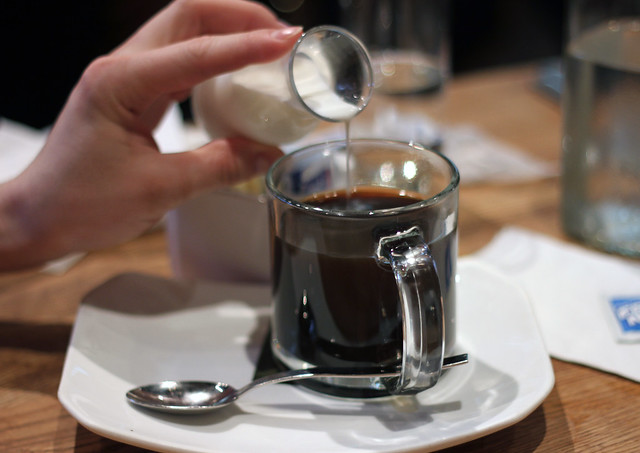 We arrived in Clinton Hill after about an hour on the subway. Just as I was beginning to regret my sudden urge to be adventurous, I remembered the soul food that was waiting for me at SoCo. The restaurant is known for it’s down-home, Southern-fused cuisine – specifically the buttermilk fried chicken and red velvet waffles they offer during brunch. Just the thought of getting a taste of home as we trekked from the subway to the restaurant made my mouth water.

Upon being seated, we were greeted by an incredibly friendly and knowledgeable server. He reviewed the menu with us, and described each dish we asked about in detail. We opted to add the bottomless mimosas to our meal (duh), which was only $15 extra. These brunch bevvies were served in stemless champagne glasses that were so cute, I was tempted to ask where I could buy some for my apartment. 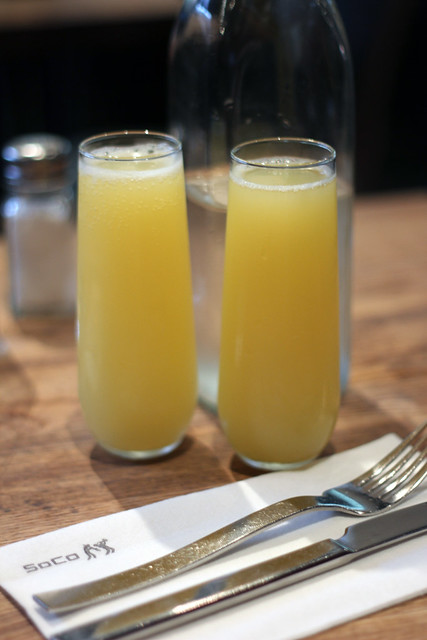 We were feeling rather gluttonous after our long walk from the G train, so we decided to each order our own savory entrees, plus a side dish and sweeter entree to share.

The beau decided to try the soul fried chicken sandwich: buttermilk fried free-range boneless chicken breast, topped with a pickle, tomato, and lettuce, and served on a kosher brioche bun (he also opted to have a slice of melted white cheddar cheese on top). The fried chicken was so delicious; crispy on the outside, juicy on the inside. He was surprised at just how much chicken was on the sandwich – it looked to be two hearty pieces of white meat chicken, rather than just one. While the french fries on the side weren’t his favorite, he said he would have no problem coming back and ordering this dish again. 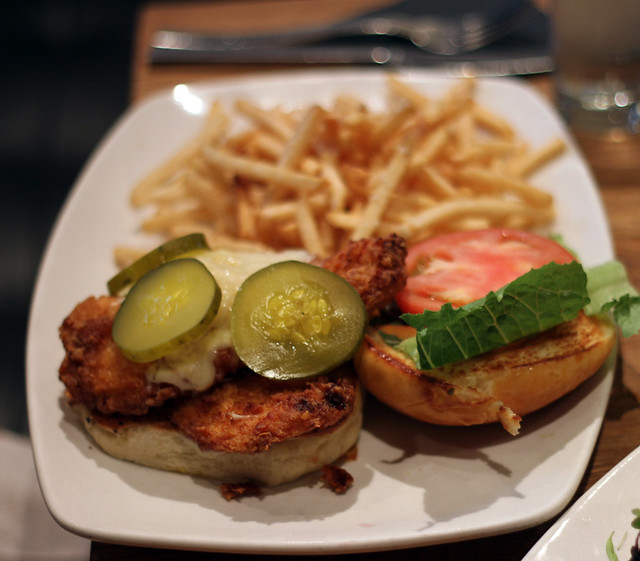 I knew what I was ordering as soon as I saw it on the menu: the Bourbon St. eggs Benedict. This is SoCo’s spin on a seafood eggs Benny. Rather than your typical crabcake, this dish is composed of a shrimp and crawfish cake, nestled between a toasted mini bagel and poached eggs, and topped with an Old Bay Hollandaise. It was absolutely divine! The shrimp and crawfish cake had so much creole flavor, and just the right amount of kick. The eggs were poached perfectly. And I loved the fact that they used a mini bagel as the carb in this dish, rather than your ordinary English muffin or biscuit. 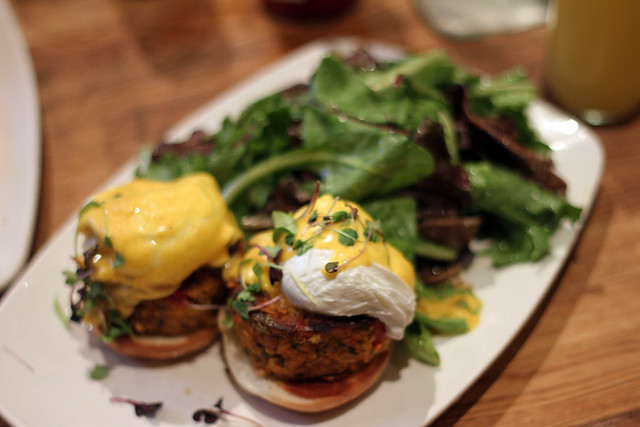 We were already pretty full at this point, but as I mentioned, our eyes were much bigger than our stomachs when we arrived, and we had preemptively placed an order for Aunt Cruz’s mac and cheese. Served in a piping hot cast-iron skillet, the mac and cheese was perfectly browned on top, with the cheese oozing out of the sides of the pan. When you look up mac and cheese in the dictionary, you should see a picture of this wonderful dish beside it. Seriously. It was that good. 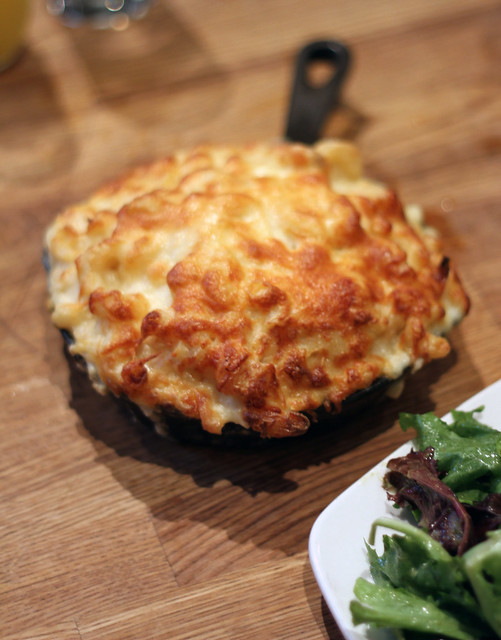 We couldn’t leave without tasting one of SoCo’s sweeter brunch offerings. Even though we were pretty much stuffed, we had already ordered the sweet potato pancakes. I was shocked (and somewhat taken aback) at their size when our server brought them out – they were HUGE! The flapjacks took up the entire plate, and were topped with a blueberry compote, a dash of powdered sugar, and a dollop of homemade whipped cream. 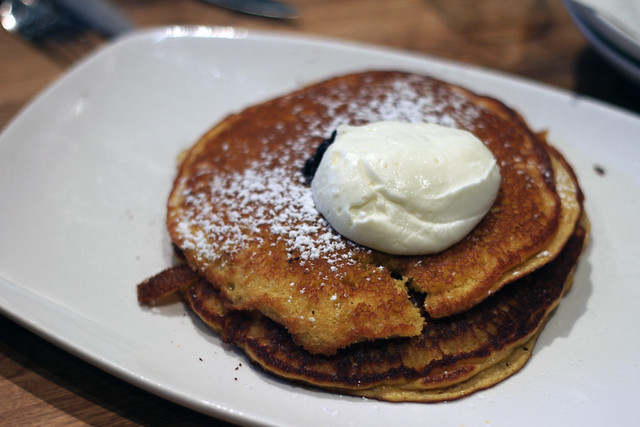 I typically eat my pancakes with syrup, and was a bit surprised that this accoutrement was nowhere to be found. But when I took my first bite, I realized it was because this dish didn’t need syrup – the pancakes were perfectly fluffy, moist, and sweet enough on their own. The natural sweetness from the sweet potatoes shined through, and the blueberry compote was the perfect compliment. Also, the homemade whipped cream was amazing. These are definitely some of the best pancakes I’ve had at any brunch in New York, if not some of the best I’ve had my whole life!

The Bitches Say: A. SoCo offers outstanding service, and even better brunch fare that is definitely worth the trip to Clinton Hill. The mac & cheese and sweet potato pancakes cannot be missed!

SoCo serves brunch on Saturdays and Sundays from 12 p.m. until 3:30 p.m. Bottomless mimosas are only offered on Saturdays.

One thought on “SoCo Brunch”