With its cheerful bright blue exterior in the heart of Greenwich Village, Shuka is hard to miss—and you certainly don’t want to, as the Middle Eastern fare coming from Chef Ayesha Nurdjaja is memorable and inventive. Coming from a home with Indonesian and Italian influences, Nurdjaja has a knack for exotic flavors. Shuka is one of the hottest restaurants in New York right now, and for good reason. 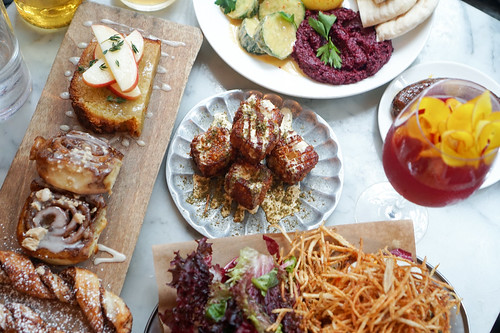 Inside, the space is charming, with wooden bistro-style seating, marble tables, blue tiles, and a large, mahogany bar with classic, Old World details and vintage style light fixtures. Initially, the restaurant seems quite small—but there are two massive rooms toward the back. The charming, sun-lit atrium is adorned with Kelly green palm frond wallpaper and French bistro chairs, giving it a cheerful vibe. The space would be perfect for a bridal or baby shower.

The brunch cocktails pay homage to the region, with beverage options including a Tunis cocktail with tequila, lime, lemon shrub, and tonic, and a Pomegranate Haifa. 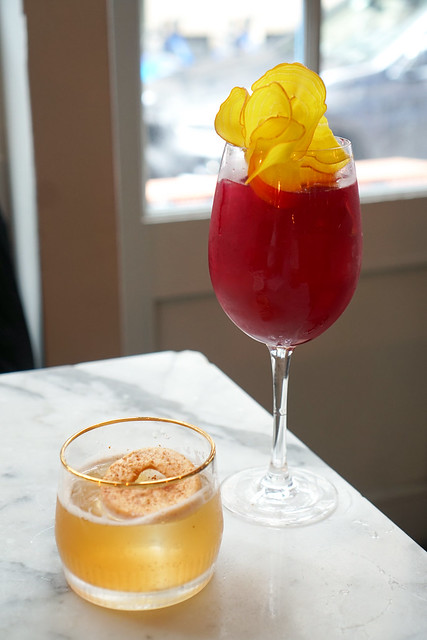 Served in an oversized wine glass, the Beet Amman Spritz was a bright fuchsia cocktail crafted with prosecco, Greenhook Beach Plum gin liqueur, Escubac, beet, lemon and agave. Though quite busy, with an adornment of a peacocking beet shaving, the cocktail was sharply acidic and refreshing, like a cold pressed juice.

The Sayan was a comforting whiskey cocktail, served in a low ball on ice with Catskill Honey Rye, apple shrub, cardamom, honey, and cinnamon. It was complex, sweet, and smooth — and went down too easily. This is the perfect winter tipple —  simple to sip on and cozy and seasonal. 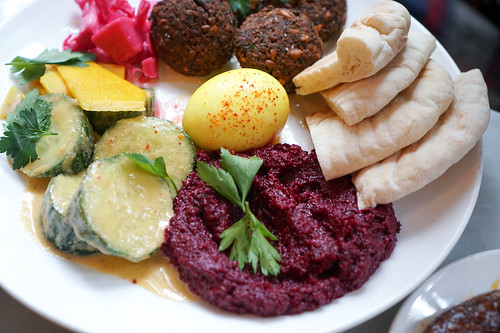 We began with the Mediterranean plate, which is an excellent option if you’re trying to keep things on the healthier side. The colorful platter was filled to the brim with beet muhammara, falafel, a hardboiled egg, marinated cucumbers, turmeric pickles, and pita. The eggs were pickled then boiled, which added an interesting acidity. The beet spread was simply perfect — and tasted great on the cucumbers or on the fluffy pita.  All the flavors on this platter were harmonious and intentional. The only downer was that the falafels were a little dense and cold to the touch. 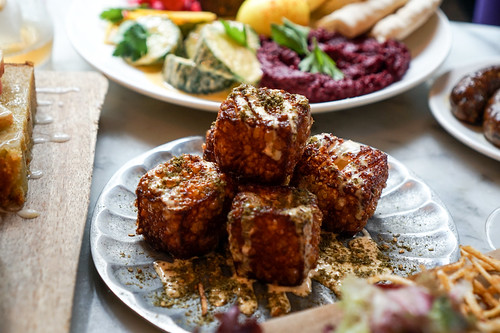 The fried halloumi appetizer is a must-order: enormous, fluffy squares of the fried Mediterranean cheese, served with toothpicks and a spiced yogurt dressing. If you’ve had delicious fried haloumi elsewhere, Shuka’s version will exceed other dining experiences. If you haven’t had haloumi at all, well you’re certainly in for a treat.

We couldn’t decide between the numerous pastries on the menu: the baklava cinnamon rolls, olive oil cake, and the chocolate pastry twists, so we ordered the sampler with all three. Turns out, we should have simply ordered the cinnamon rolls, as those were the best of the bunch. 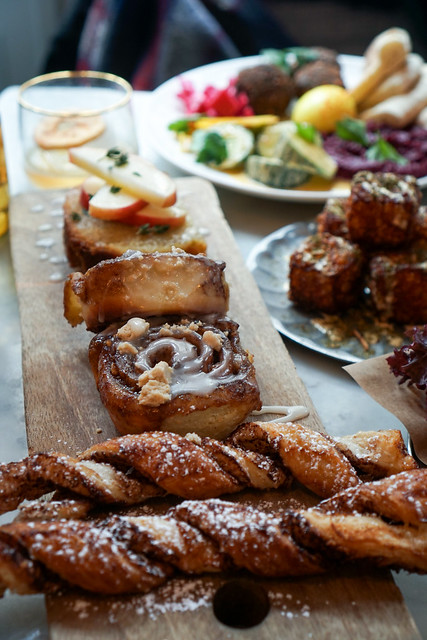 The olive oil cake was nice — it was an apple olive oil cake, though we could hardly taste the apple. It was glazed with a lemon sugar glaze, with sprigs of thyme for a nice touch and added flavor.

Meanwhile, the chocolate puff pastries were lackluster — dry and lacking in flavor. We recommend just ordering the cinnamon rolls. 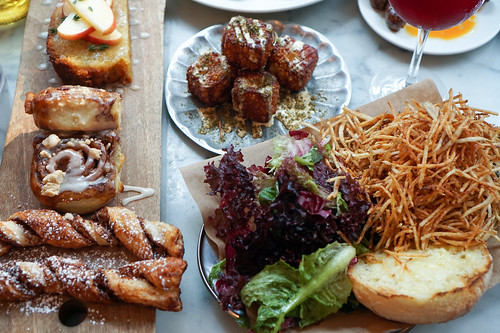 There are three shakshuka on the menu — a green chickpea, an arctic char shuka, and a classic shuka. We decided to try something different, opting for a pork belly sandwich at the waiter’s recommendation.

The pork belly was a luxuriously prepared piece of meat — as all well-prepared pork belly should be. The sandwich was served with a fluffy brioche bun to cradle the goodness of a runny egg atop the succulent pork. But, this was a difficult sandwich to eat. The sandwich was piled high with strings of fried potatoes. The potatoes were salty, delicious, and crave-worthy, but they would have been better aside the sandwich, rather than on it.

The flavors of Shuka are fun, fresh, and really one of a kind in NYC. There are some nit picky things we would change, but we only noticed them because everything else was perfect.

The Bitches say: five Champagne flutes for Shuka. There is an energy about this restaurant that shines through the atmosphere, the service, and of course, the food.