Brunch in the District sets the tone for all around good weekend vibes. There are, however, perks to living beyond the Districts borders in Arlington. Just outside D.C., the restaurant scene is quickly growing with Mike Isabella’s additions to Virginia Square and Tyson’s Corner, Ambar in Clarendon, and SER in Ballston.

On this rainy Sunday, I was thrilled to be having brunch just walking distance from my apartment. When I heard SER was a tapas restaurant from the same people who brought us Joselito (our best brunch of 2017!), I knew we were in for something special. 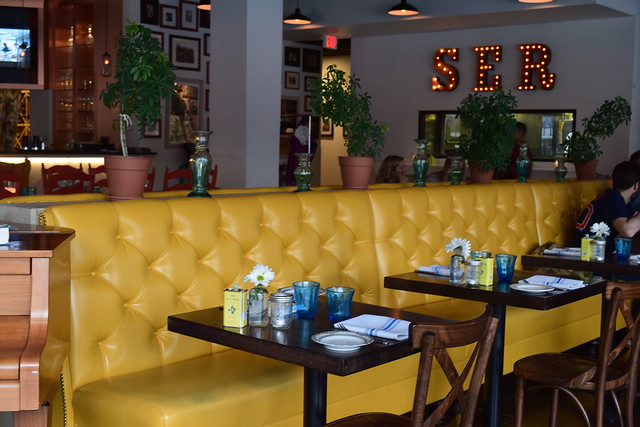 My boyfriend and I walked into SER freezing cold and dripping wet. The warm staff and atmosphere instantly brightened the mood. The space is modern and accented with vibrant colored seats and flowers, yet maintained the old-school, family style components we love to see in family-owned restaurants. 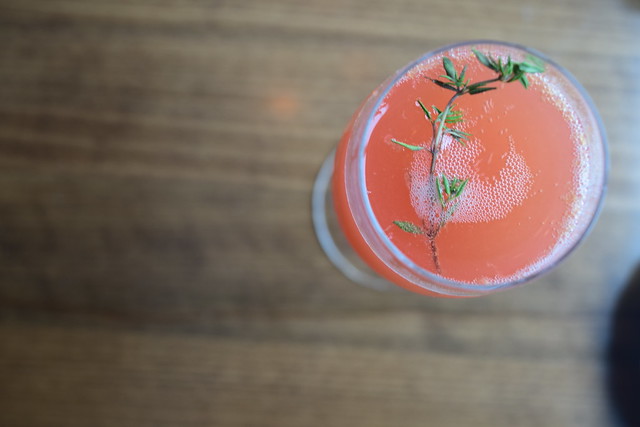 We were seated by the window and it was rather nice to be surrounded by the floor to ceiling windows as the rain trickled down. We immediately ordered a round of beautifully colored grapefruit Bellinis. They were refreshing, crisp, and far from shy on the bubbly. 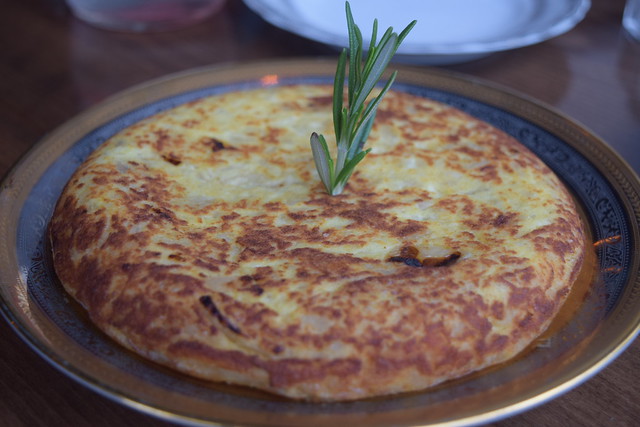 Although the brunch itself wasn’t tapas style, we wanted to try some Spanish classics. We ordered a tortilla de patata, an egg and potato frittata of sorts,  a Spanish egg sandwich called the Sara Montiel, tostada de aguacate, a Spanish version of avocado toast, the Spanglish, a rendition of the classic English breakfast, and some gluten free lemon and blueberry pancakes to top it all off. I know what you’re thinking, “how could I betray ordering French toast?” To be honest, I couldn’t decipher it on the menu at first glance because there was such a mixture of Spanish and English text on the menu. Next time.

I had studied in Madrid and traveled around Spain, so I had some pretty high expectations for these dishes. My boyfriend and I rolled up our sleeves and were ready to dig in. The tortilla was served first, crispy on the outside and gooey, caramelized egg, onion, and potato on the inside. This was a tortilla of excellence–a must order. 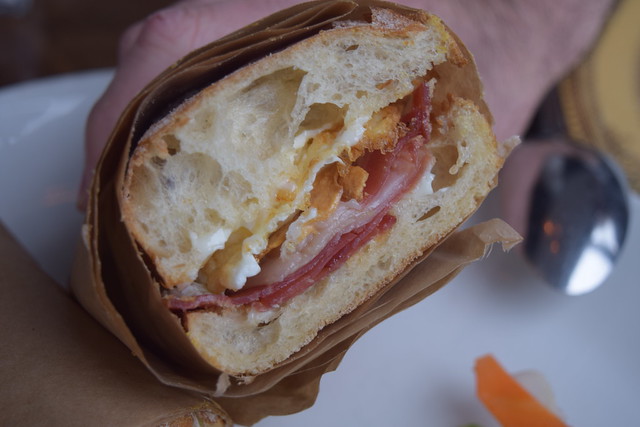 The Sara Montiel arrived shortly after. Served on a crusty ciabatta roll, this sandwich was awesome and nothing like we expected it to be. Egg sandwiches, although simple, aren’t typically found on menus of a restaurant of this caliber. Not only did this egg sandwich show up, it was the star of the performance. Probably one of the best egg sandwiches to come out of a kitchen like this. There was Serano ham, an explosive egg sunny side up, soft bread and a spicy aioli. We aren’t sure if we can go back to standard egg sandwiches now. 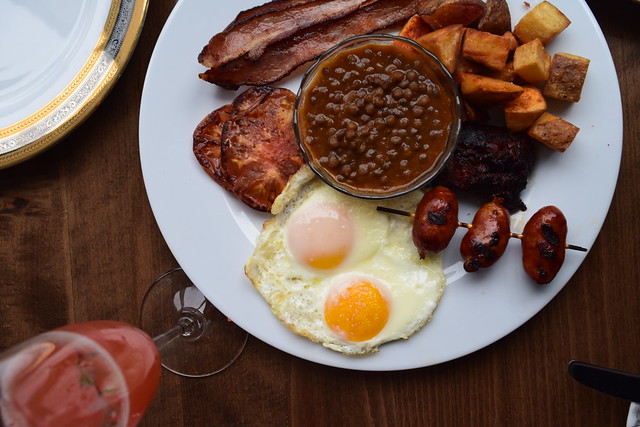 After being so impressed with these starters–yes, they were appetizers–we were excited to try our mains. Andrew’s Spanglish arrived and this was without a doubt an incredible and unconventional brunch dish. It came with a little bit of everything: some fried eggs, crispy potatoes, refried lentils, two different sausages, and bacon. A Spanish restaurant should have high quality meats and fix-ins, and SER did not let us down. 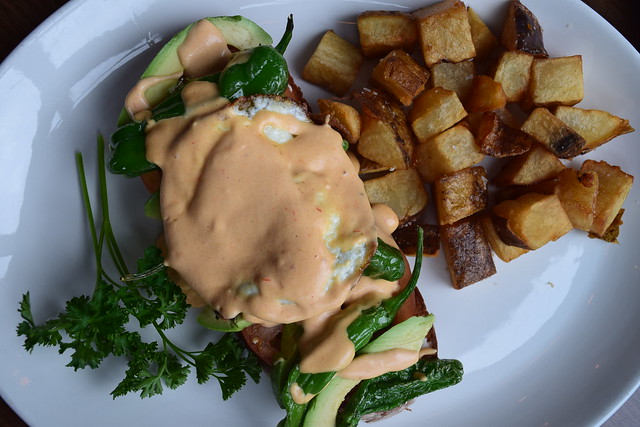 My avocado toast was on its way and I was excited for something savory, but fresh, to hit the spread. Unfortunately, I wasn’t impressed with this dish. The intentions and flavors were good, but it had more sauce (which was delicious and made with goat cheese) than the avocado. The avocado itself wasn’t seasoned, smashed, or tastefully presented on the toast, which I’ve typically been accustomed to. There are better items to dabble in at SER than this avocado toast. 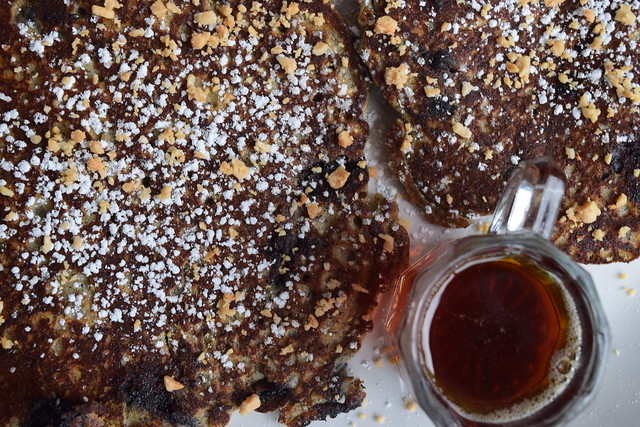 Although, I would have rather had French toast to finish this meal, I was just excited to have something sweet to compliment this ultra meaty and savory brunch. I love seeing menu items that have allergen-friendly or diet-sensitive options, especially when they are well executed. These pancakes did not live up to the standards of the rest of the meal. The texture was great, which I was pleasantly surprised about for something that was gluten free, but the lemon flavor had chunks of lemon rind and it was far too bitter.

The pancake wasn’t sweetened and required a hefty dose of maple syrup to compensate. Skip out on this dish and give the French toast a shot, or skip the dessert all together and just get a round of drinks; their wines and liquors are outstanding.

The Bitches Say: B+. SER has the Spanish dishes down to a science. Authentic food along with great atmosphere are a sure thing, despite some signature American-dish malfunctions.