Sadelle’s is one of those restaurants people tell you you have to visit when you move to New York City. I’ve heard it many times … “Have you been to the spot in SoHo that serves the incredible smoked fish towers and good ole Jewish deli fare?” If anything, you must go to Sadelle’s at least once even if it’s just for the ‘gram. 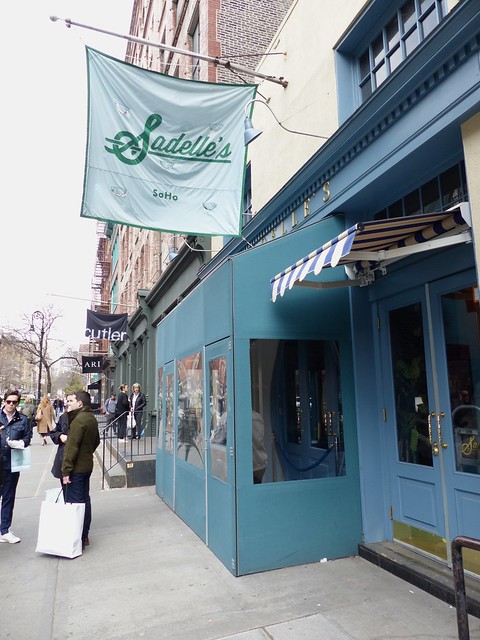 My friend Chelsea and I decided to make a notoriously difficult reservation at Sadelle’s to celebrate spring and our friendship. The facade is adorable of course and walking into the counter-serve area where the smoked fish is being sliced is such an experience. We were seated at our table right behind the counter almost immediately.

If you are looking for a quiet SoHo cafe brunch, Sadelle’s is not for you. No matter the time of day, this restaurant is overflowing. With guests squished into multiple levels of seating, I was so thankful we could stretch out in our booth.

Our waitress asked if we were ready to order almost immediately, which is something this Bitch despises about these type of touristy restaurants, but the food is good so we’ll let this one go.

After we had a chance to enjoy each other’s company and dive into the menu, we were ready to order cocktails. Chelsea got a mimosa with grapefruit juice instead of orange. She orders it so often I can’t believe it isn’t named after her at this point. She said it was refreshing and just how she likes it: nice and see-through. I gravitated toward the Moscow Mule, which was pretty standard, but boy, did the vodka creep up on me. 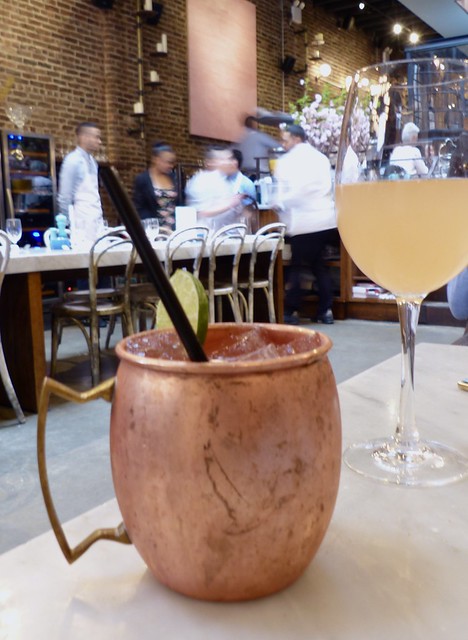 Last time we brunched at Sadelle’s they had run out of their famous sticky buns, so Chelsea insisted we order them this time. Turns out they had run out once more, but being the sassy friend that she is, Chelsea insisted they bake another batch even if we were going to be the only table to enjoy them. I don’t like cinnamon, so they aren’t my cup of tea, but there was no way I was combating that. They’d be ready after our meal.

You can’t go to Sadelle’s and not order one of their famous fish-and-bagel combos. I decided on the house salmon, a take on the classic bagel with lox. Several of the restaurant’s tables are a tight squeeze, which is potentially where their signature idea came from. We’ll have to ask next time, but Sadelle’s serves this dish (or dishes I guess) on a stacked tower. Wonderfully photogenic, the tower comes with a plate of fish, tomatoes, cucumber, dill, and all the fixings. On the side, I was served my bagel and cream cheese. Because I’m a true Bitch, I had to order a side of avocado as well. 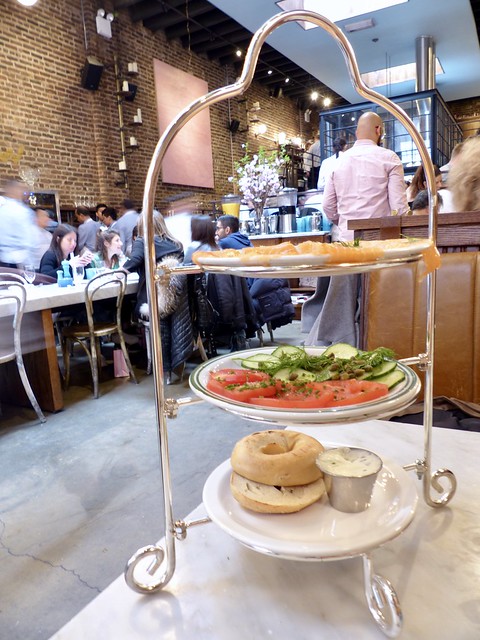 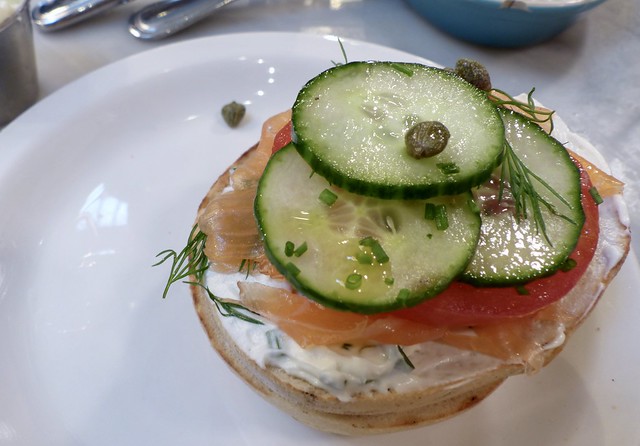 The build-your-own aspect of the entree is so fun. I loved being able to decide exactly how much of each ingredient I wanted to top my bagel half with. Each addition tasted pretty fresh, although none were wow-worthy, and my bagel was just okay. It’s more about the whole experience, in my opinion.

Chelsea had heard the tuna melt was a great alternative if you’re not in the mood for smoked fish, and our waitress told us it “saves her” on many a hungover morning. The absolutely ingenious thing about Sadelle’s tuna melt is that it was served on an inverted and toasted everything bagel. Chelsea loved the sandwich and said the everything seasoning soaking into the melty cheese really made all the difference. 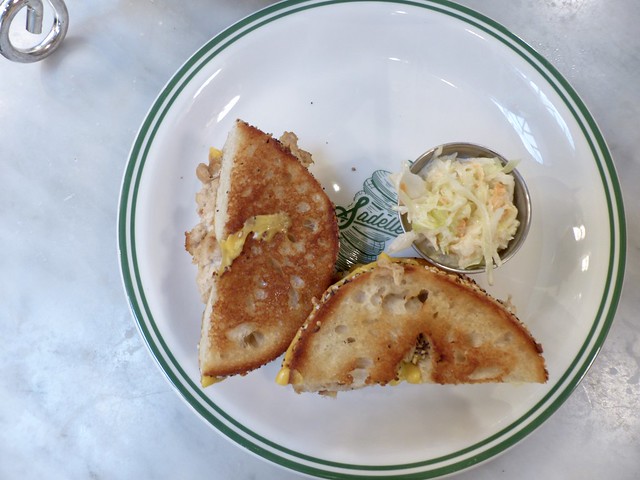 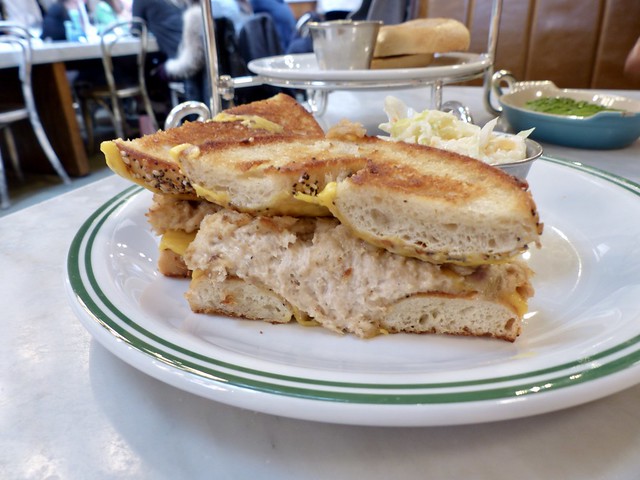 To conclude, we finally got our hands on those sticky buns. I wasn’t exactly sure what made them so famous. To me, they were three small mediocre cinnamon rolls, but Chelsea raved about them for days. Make sure to get in early if you’re a fan of sticky buns so you can snag yours before they’re gone! 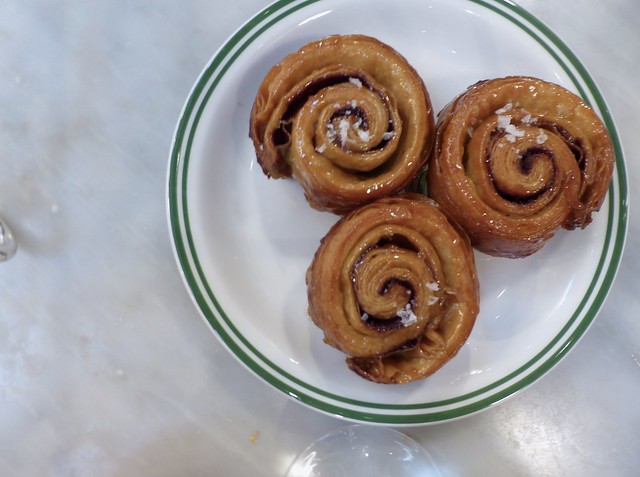 The Bitches say: B-. Sadelle’s is a spectacle and sometimes feels like just another place on the “must-visit” list for its photogenic food. The seafood towers are tasty, but not worth the screaming baby bound to be sitting within arm’s length. We say go at least once in your life.