I’m constantly making an effort to go outside of my convenient, Logan Circle/Shaw neighborhoods to explore—and to write about—brunch spots in various locations. Washington has an incredible food scene, and that extends beyond downtown to up-and-coming neighborhoods like Takoma Park and Petworth, and outside of the city limits to Arlington, Alexandria, Bethesda and as far away as National Harbor (which actually isn’t very far at all.)

I absolutely adore Petworth, which is home to Himitsu (one of my favorite meals this year), Timber Pizza Co., Petworth Citizen, and a few more great spots. I’d visited Ruta del Vino, a charming restaurant focused on South American wine, for a bottle of red as we waited for our table at Himitsu. I loved the decor, vibes, and service and wanted to go back. So, when they dropped us a line to let us know they were serving brunch, I made a reservation STAT. 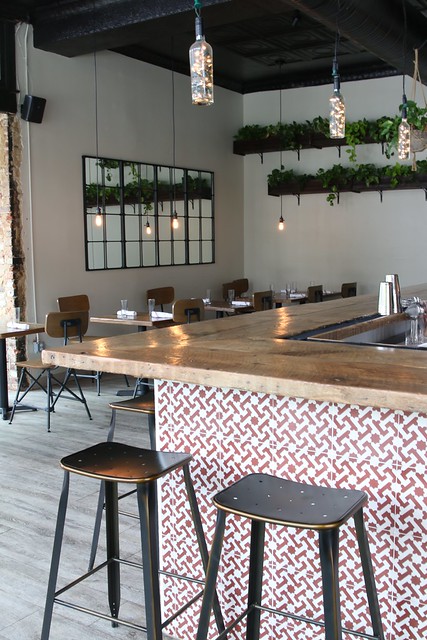 We walked into Ruta del Vino at 1:40, with the brunch cutting off at 2 p.m. The restaurant was entirely empty—not a good sign, but they had just launched brunch and we were obviously quite late. As I am totally enamored by my brunch date, it didn’t bother me that the restaurant was empty—as long as the staff were OK with us being there. They were happy to accommodate (and they were absolutely wonderful). 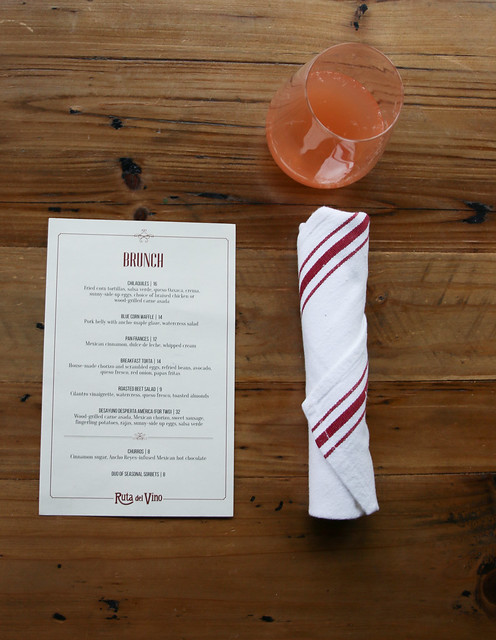 I ordered a grapefruit Bellini while my accommodating brunch date and sober chauffeur ordered his signature morning grapefruit juice. He’s starting to get used to me being drunk half the time. (And he probably should, as one mimosa still does me in.) Both were fresh, frothy, and light—the Bellini went down far too easily. 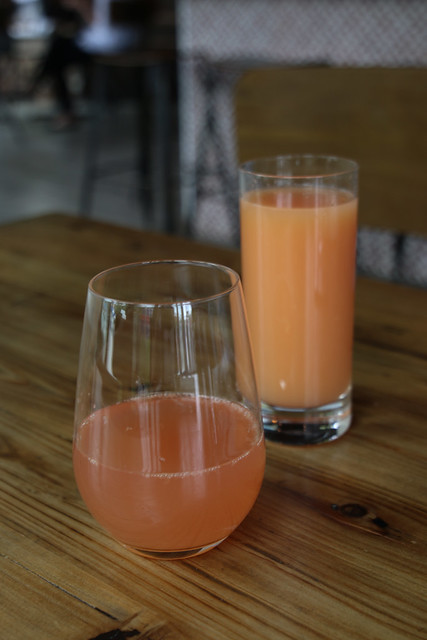 We opted to share everything, choosing the French toast, churros, pork belly on a blue corn waffle, and the chorizo and scrambled egg torta. 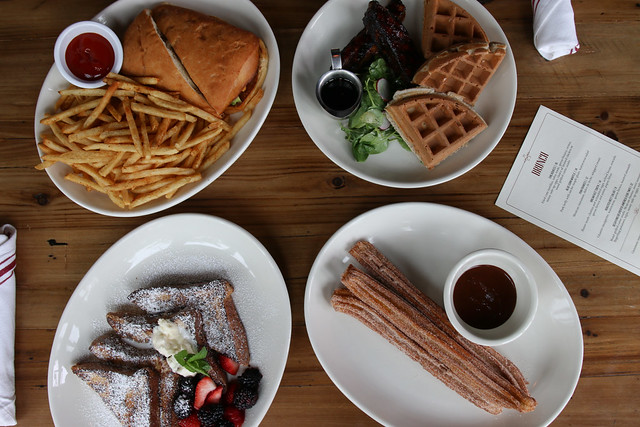 Tortas are Spanish sandwiches, and this one was served on the most divine, fluffy white bread. It was filled with scrambled eggs, chorizo, diced onions, avocado and a creamy mayonnaise. It was an absolutely epic sandwich, each bite had the correct proportions of cheesy, eggy chorizo goodness with mayo and fluffy, warm bread. It was served with a hearty helping of fries—this dish is a great value for brunch if you’re hungry or hungover. Or, God forbid, both. 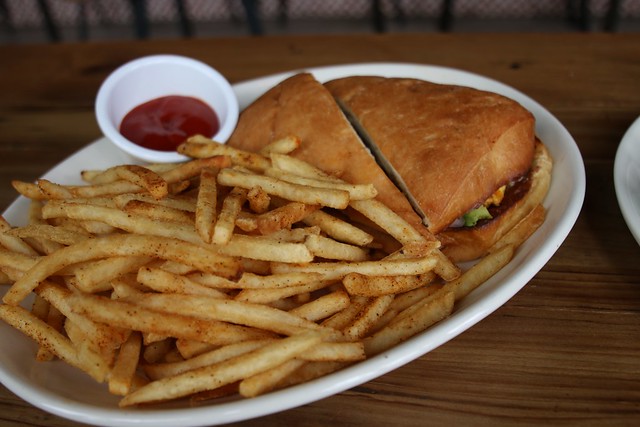 The pork belly was beautifully grilled and glazed in a savory, sweet chili sauce. It was served atop blue corn waffles, which were a bit dry, but made better when slathered in syrup. This was a very nice adaptation to the classic waffle and protein. 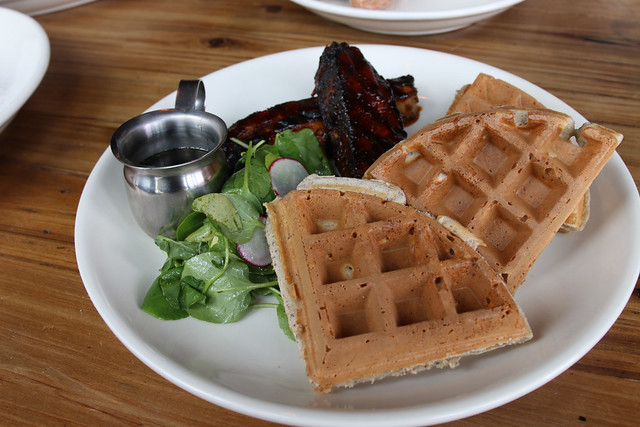 While we were super excited about the churros, it turned out the French toast was far better. So, we directed our efforts and our forks that way. The churros were served in the classic fashion: long and covered in cinnamon sugar. While served hot and crispy, they were a bit dry—the batter could have been more moist, or they could be more oily—in the good way. They were served with a Mexican chocolate dipping sauce, which was definitely helpful to add flavor but lacked flavor in itself. If this is a Latin American spot, we’re expecting mind-blowing churros, and these just didn’t live up to my expectations. 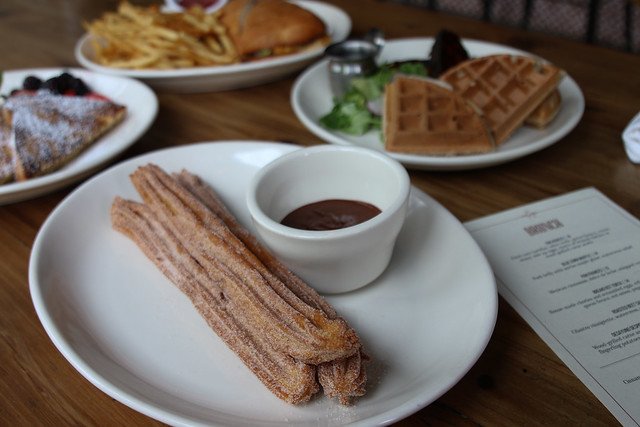 The French toast was moist and packed with flavor, however. Served in the classic style of triangular halves, it was topped with powdered sugar and fresh strawberries, raspberries, and blueberries. Inside, it was moist and rich with creamy, fluffy bread, clearly soaked in the good stuff for quite some time. If you’re looking to go ham on some carbs, order the French toast and skip the churros. 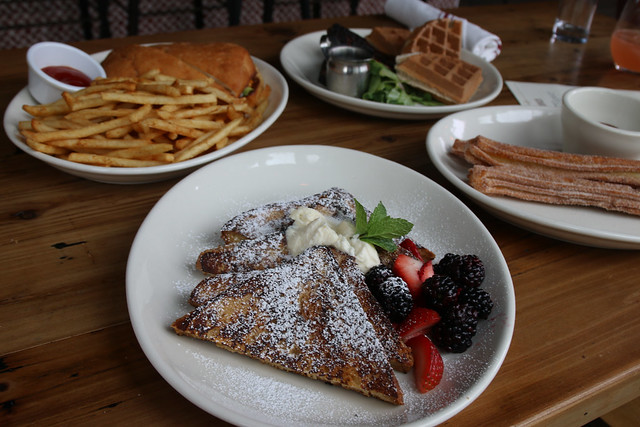 Ruta del Vino is an awesome neighborhood spot for Petworth folks and also worth the trip if you love brunch, Latin American food and wine, or both. We were charmed by the palm print wall paper and friendly service, and fully satisfied by the hearty, delicious food.

The Bitches say: A-. A beautiful restaurant with great service and a solid patio. The brunch menu offers a good assortment of dishes, and the only thing missing is a bottomless deal, and a bit of improvement on those churros.