I cannot believe I am saying this, but it is still hot in Chicago. So hot, that when Svetlana, Percy and I planned on getting brunch together in the West Loop this recent October Sunday, we considering taking a cab the two blocks from Svetlana’s apartment to Roister.

Marching fast and simultaneously maneuvering ourselves back and forth from one shady side of the street to the next, we made it to Roister, the supremely popular New American restaurant located right in Fulton Market. 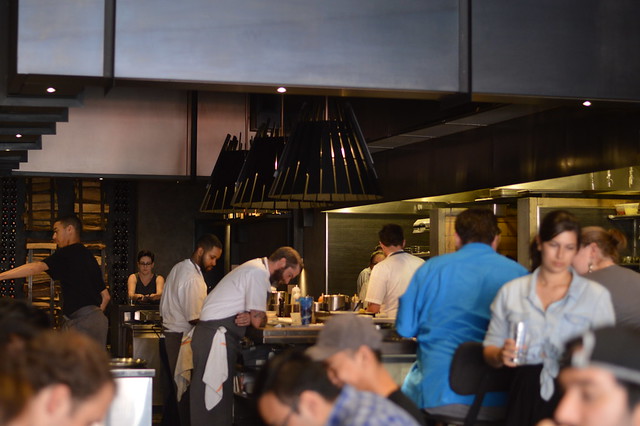 Roister is tiny, and with highly coveted dinner reservations made in advance, we assumed it would be pretty impossible to walk in on the weekend the restaurant is debuting brunch and score a table. We decided to give it a shot regardless.

When we arrived, the hostess informed us that they were completely booked for brunch and she couldn’t accommodate us. Dreading the thought of having to go back outside in the extreme heat, I asked her when the next table was set to arrive at one of the reserved tables, and when she said not for another 55 minutes. I assured her we would be in and out before they arrived, and she took the bait—SCORE! 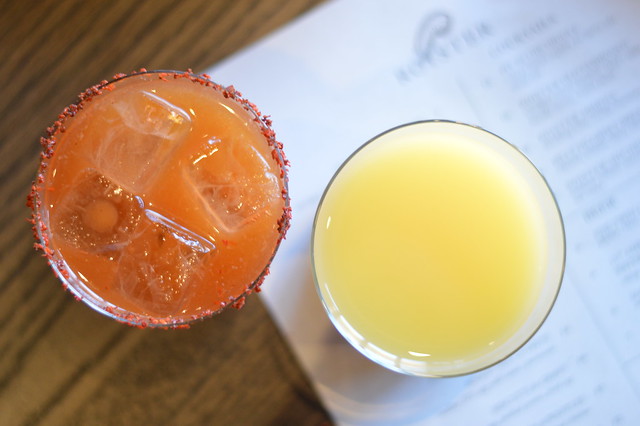 We quickly started with cocktails; two mimosas for Svetlana and Percy, and then a Roister michelada for me. We were all intrigued by the mimosa, described as being composed of sparkling wine, orange marmalade, and brioche, but upon tasting it, it didn’t seem to be more than a standard mimosa, though I am certain the sparkling was better than Barefoot Bubbly. My michelada was satisfying, and I especially loved the saltiness from the soy sauce hot sauce. 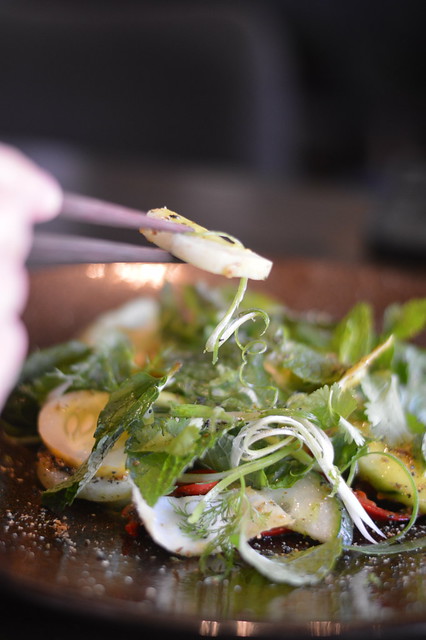 We decided to start with the spicy cucumber salad, topped with a pineapple-fish sauce dressing, hot peppers, and lots of herbs; you have been warned, people who detest cilantro! This salad was wonderful. It was light, tangy and refreshing, which was perfect for the hot day, and it came packed with a bunch of heat. Svetlana and I really enjoyed this salad—one of my favorites I have had all year, maybe; it is an elevated salad in comparison to most you find on a brunch menu. 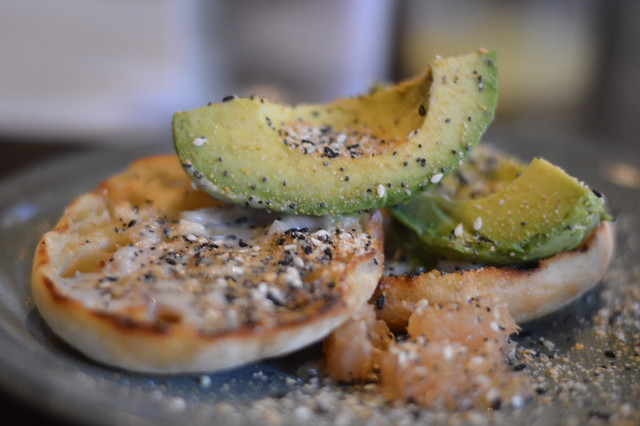 Svetlana (my mainly vegan friend) took one for the team and ordered the avocado toast that came served with “everything butter” and grapefruit. While you see avocado toast on brunch menus everywhere these days, I must say this wasn’t the most inventive avocado toast that I have ever seen, but it was packed with flavor, nonetheless.

The everything butter tasted just as one would imagine, like that of an everything bagel. The grapefruit did add a unique element to the toast, though in my opinion the butter was a little on the heavy side, and took away from the refreshing fruit flavor. 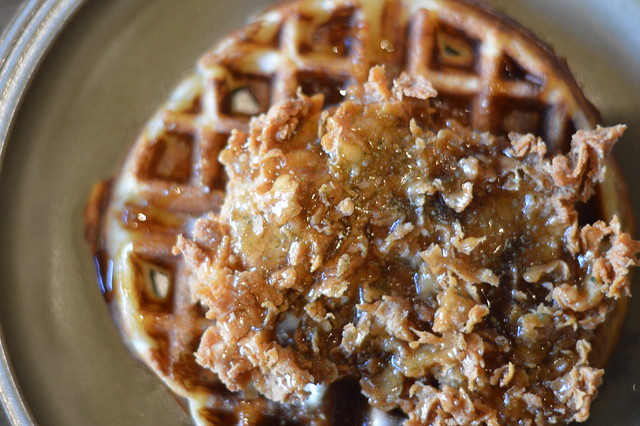 Percy ordered his favorite thing of all time: fried chicken. Percy makes some of the best fried chicken I have had, but the restaurant’s chicken served him well. The chicken came served with honey butter and whiskey syrup, but I think the best part of the dish, aside from the chicken’s crispiness, was the waffle. The waffle was fluffy, not too sweet, and simply put, divine. 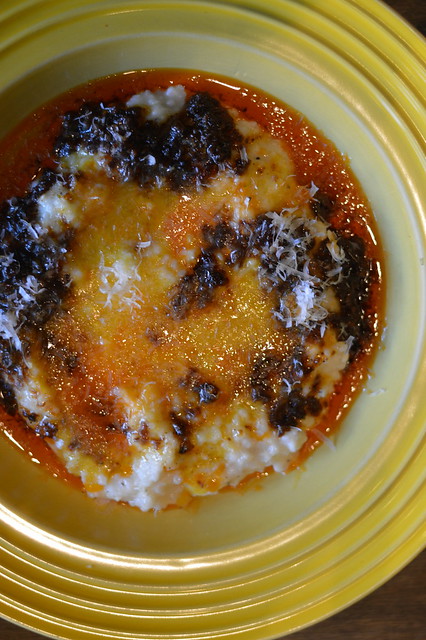 For the ultimate dish of our brunch meal, I present to you my brunch choice: the Anson Mills grits. This dish blew my mind.  The grits were made with scallop XO, egg yolk sauce, and parmesan cheese.  The scallop XO sauce is essentially dried scallop, red chili pepper, ham, dried shrimp, garlic and oil, and it is heaven on a plate. It is salty, tangy and greasy, but in all of the right ways. 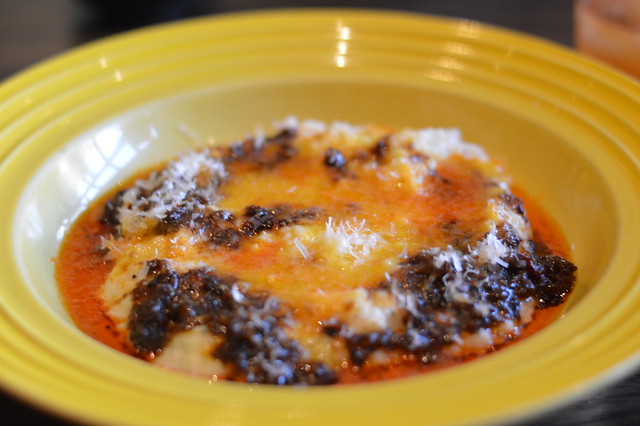 The grits were light, which was perfect because the sauces were very rich. Both the egg yolk and the scallop XO sauces were creamy and super flavorful. To be honest, the dish reaches that level of umami that is seldom achieved by dishes you typically find on a brunch menu. Svetlana and Percy agreed, and I must share that even after the grits were gone, we were still running our fingers across the plate and licking them shamelessly. 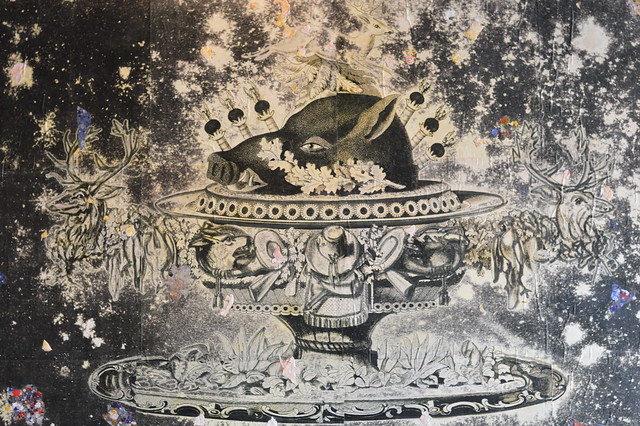 There isn’t much more you could really ask of brunch at Roister. The restaurant treats brunch as it does with dinner; it presents delicious food that is straight to the point, no BS.

The Bitches Say: B+. Well executed and flavorful menu items, pleasant cocktails, and a minimalist, yet cozy environment that is the perfect backdrop for Sunday brunch with friends. Don’t risk not getting a table and make a reservation ahead of time.