One of our favorite events of 2016 was The Village Voice’s Choice Eats tasting event. We had such a fun evening, filled with friends, booze, and food from more than 50+ restaurants, handpicked by The Villlage Voice. So when we were invited to attend this year’s soiree, we gladly accepted the invite, never one to turn down the opportunity to attend a food festival–especially one as amazing as this. 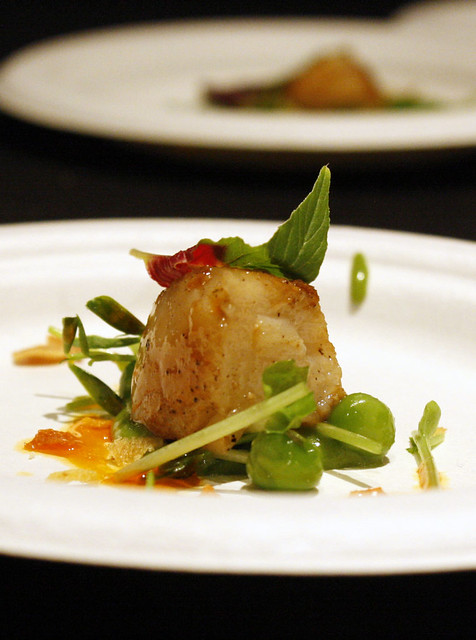 We were pumped for what was sure to be a fun evening, having previewed the featured restaurants before we arrived. From No. 7 to Lolo’s Seafood Shack to The Handpulled Noodle, there were a ton of restaurants we hadn’t tried before, as well as a few personal favorites we couldn’t wait to try again. The anticipation of unlimited booze from Asahi and Runs of Puerto Rico, among others, didn’t hurt either. 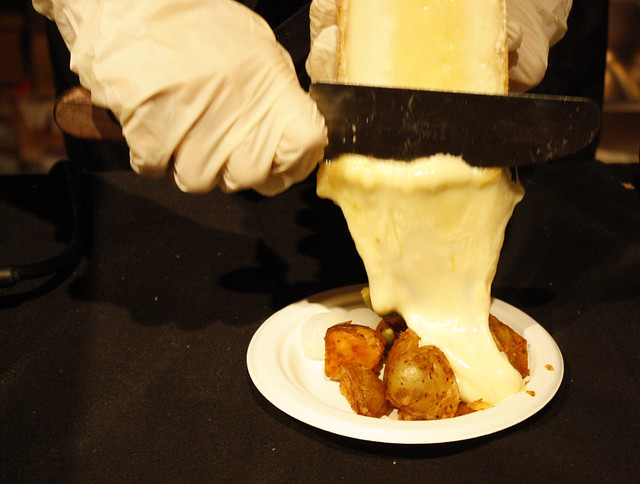 As soon as the doors opened, we immediately made a beeline to La Vrai Raclette’s table. Having tried their brunch, we knew they would be one of the hotspot vendors to have a long line throughout the evening. We could smell their signature cheese from a mile away! 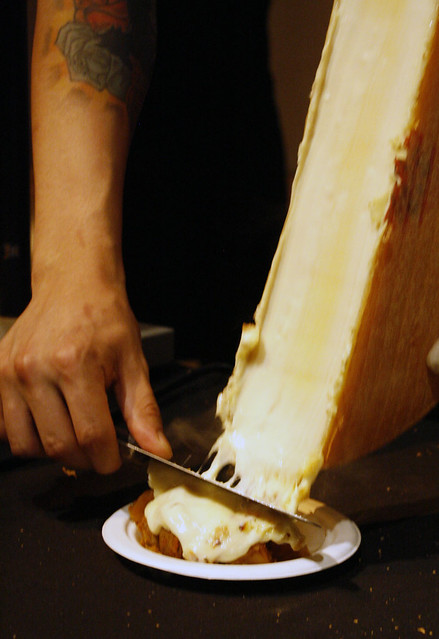 The halved cheese wheels were being warmed to-order, which was a nice touch. Served melted overtop cooked potatoes and a side of pearl onions and mini pickles, this dish was funky, savory, and a great way to kickoff our evening.

Next up on our must-try list was Nom Wah Nolita. The beau and I had been to their sister Chinatown location, Nom Wah Tea Parlor–a dim sum must when in NYC–but had yet to try this new, fast-casual offshoot. 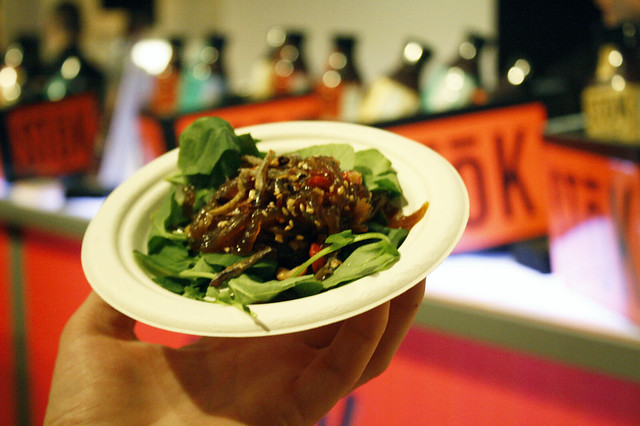 To our surprise, we discovered they were serving a jellyfish salad. You read that right–jellyfish. I’m the kind of Bitch who will try anything once, so I was all for it, but Fields was a little skeptical. It had a similar taste and texture to seaweed salad, just a tad bit chewier, and the authentic flavors were on point. I found myself finishing the entire plate. 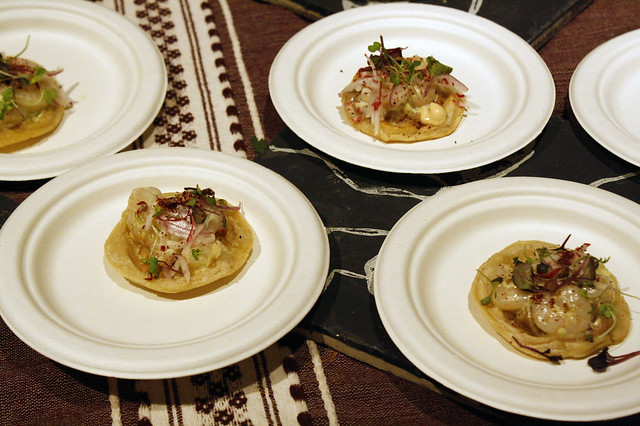 We came across a few more adventurous food offerings throughout the night–one from The Black Ant, and another from Kaia Wine Bar. Our brunch experience at The Black Ant left us prepared for an inventive spin on a classic dish. Poached shrimp tostadas were served warm, with an option of grabbing some crispy grasshoppers (!) to accompany your dish. 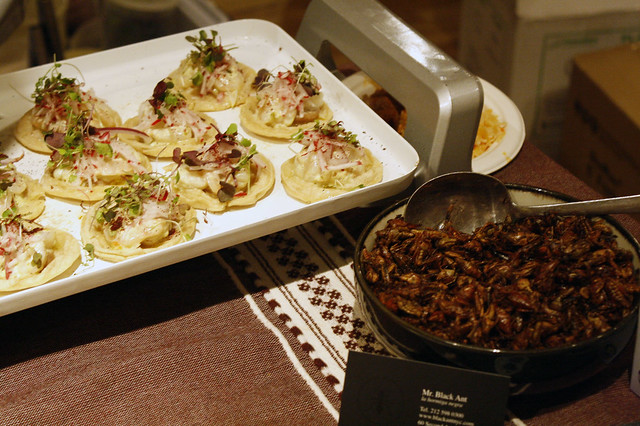 Again, my better half was too apprehensive to try the grasshoppers and I was left on my own to sample these for the sake of journalism. On their own, the shrimp tostadas were incredibly tasty–the shrimp was perfectly cooked, and the sauce was flavorful. The grasshoppers gave the tostada a slight crunch and a tang of saltiness. I gladly would have tried more.

Kaia Wine Bar was a new resto we hadn’t heard of before, but we were intrigued. Their menu reflects international influences on modern South African cooking, and at this particular festival they were serving elk heart tacos. A tad chewy, but incredibly hearty, this protein was worth trying and worked great in the taco. 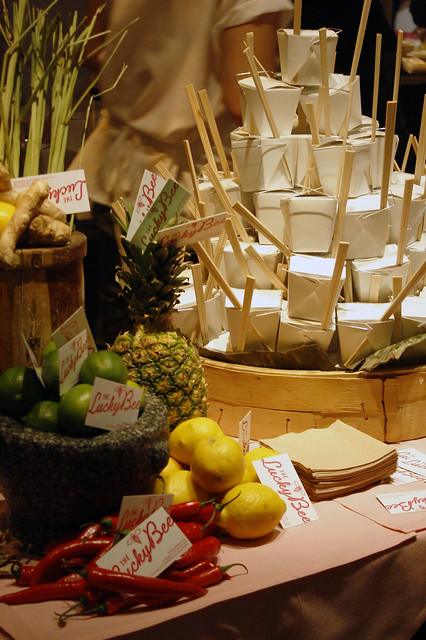 We were also excited to see The Lucky Bee as a featured vendor. At first glance, it looked like this Thai restaurant was still prepping their dishes, as their table was lined with closed takeout boxes and their sign had a blank spot where their featured dish should be.

However, their chef explained they were just having a little fun and keeping their dish a secret until we opened our takeout box. Inside, we found a freshly shaved green papaya salad, a classic Thai dish. While slightly on the really spicy side, this was refreshing and the epitome of Thai food. 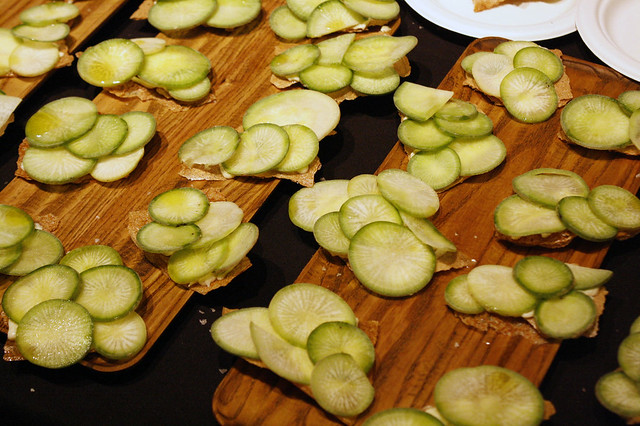 Alas, there always has to be one less-than-impressive dish at these kind of events. We had high hopes for Sunday in Brooklyn, as we had recently tried their brunch and were blown away. However, their featured dish here was essentially a homemade cracker with a buttery spread and thinly sliced green radishes.

“This is it?” we exclaimed to each other. This dish was sadly lacking in flavor and seemed somewhat thrown together. We took one or two bites and didn’t bother to finish. 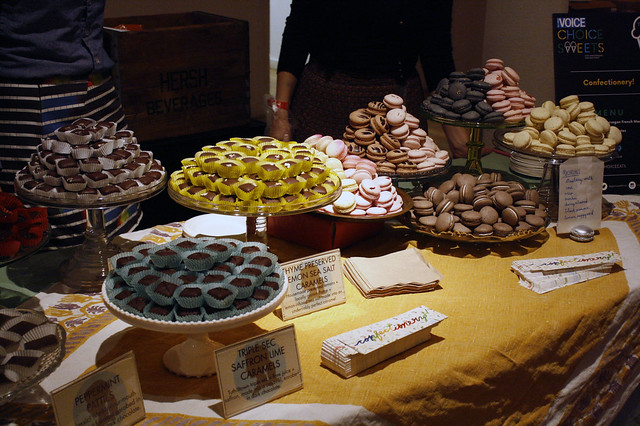 On the dessert front, there were a ton of amazing options to choose from, but with both of us being doughnut fanatics, we opted to close out the night with sweet treats Doughnut Plant and Underwest Doughnuts. Those Maple Waffle doughnuts never disappoint! 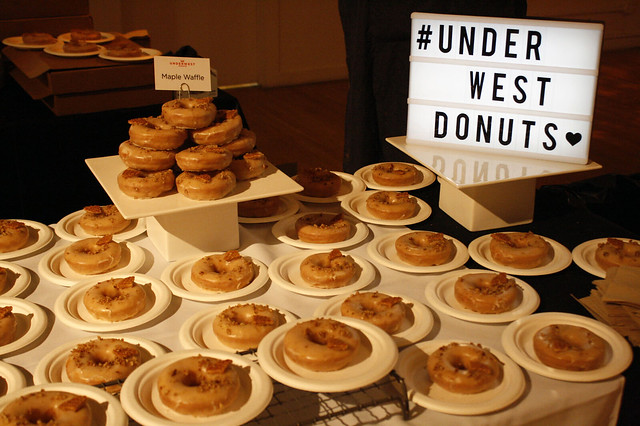 Just like last year, The Village Voice’s Choice Eats was a huge success, and one of the few food festivals we’ve encountered where you don’t find yourself stuck in line, waiting for food for hours on end. Everything was incredibly streamlined! For more information on this year’s event, click here.