It’s the most wonderful time of the year, in my opinion. The air is brisk and the leaves are gradually starting to change. I spend my Saturdays watching college football and cheering on my ‘Noles, while Sundays are dedicated to brunch and various food festivals. Like The Great Big Bacon Picnic! The Bitches were invited to attend for the second year in a row and I immediately volunteered myself as tribute due to my love for bacon. 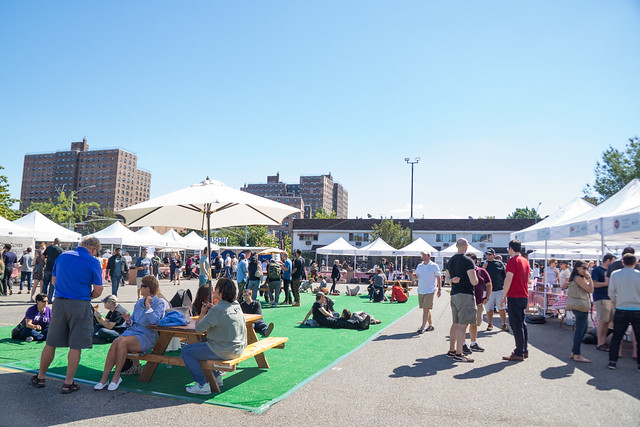 Last year, the picnic was both indoors and outdoors. This year, all of the food vendors were outdoors, with a Bacon Bloody Mary and Bacon Egg Cream bar plus a VIP lounge inside. Upon our arrival, we did a quick lap to scope out each vendor and hone in on any items we thought might end up having absurd lines later in the day. 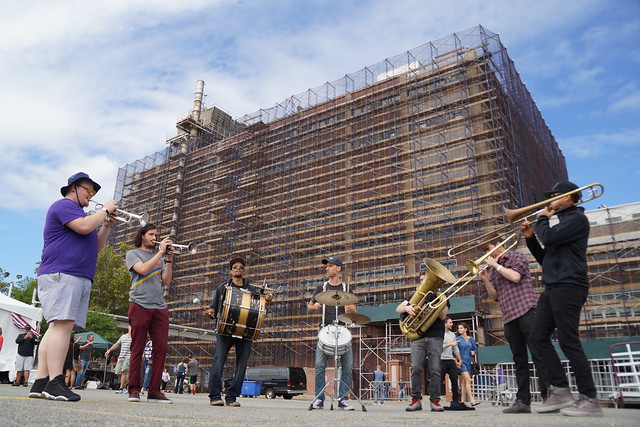 As we walked around, we grooved to the tunes of Brooklyn’s own High & Mighty Brass Band, who incorporated a mix of today’s top hits and oldies but goodies into their set list. I love brass bands, as they remind me of being in New Orleans for Mardi Gras during my college days. They even did a 2nd Line Parade through the picnic later in the day! 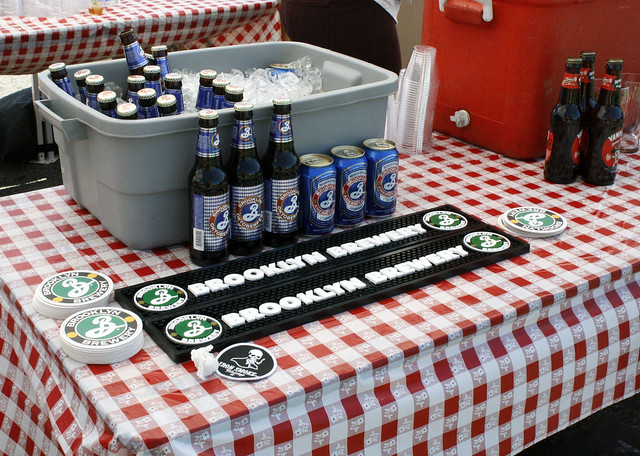 With over 100 brew masters, distillers, culinary experts, and restaurant chefs in attendance, our mission was to try every food item at least once–imbibing a bit along the way. As with any festival of this size, there were definitely a few standouts as well as a handful of items that left us wanting more. 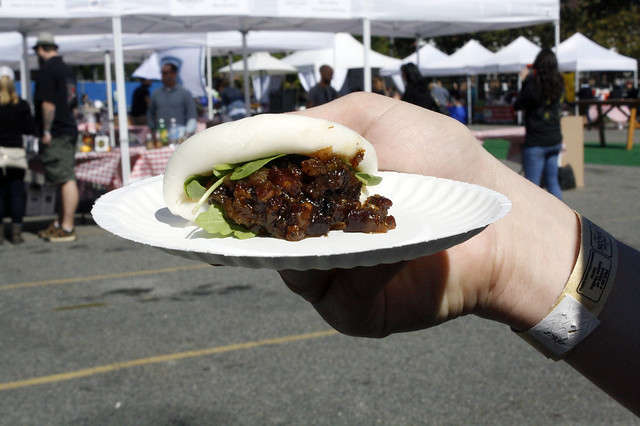 One of our first stops was Kingsley; they were serving a twist on your classic bao bun.  Rather than using a slice of bacon, they stuffed the bun with bacon marmalade, a dab of mayo, scallion, and sambal. a spicy relish. I was initially stoked for this dish, and while it was still unique and tasty, the bacon marmalade was a bit too sweet for my liking. 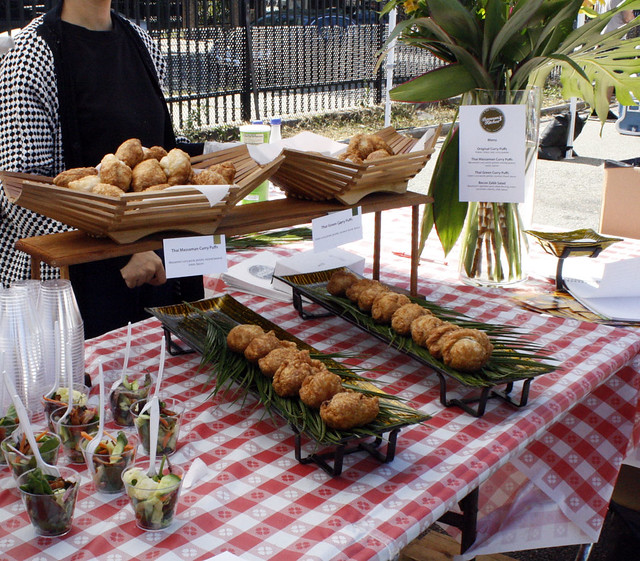 One of the more memorable food items were the green and red curry puffs from Boonnum’s Kitchen. Slices of bacon were baked directly into the flaky puff pastries, and spiciness of the green and red curries were a nice contrast to the smoked meat. I never would have thought to use bacon in this way and appreciated the originality of the dish. 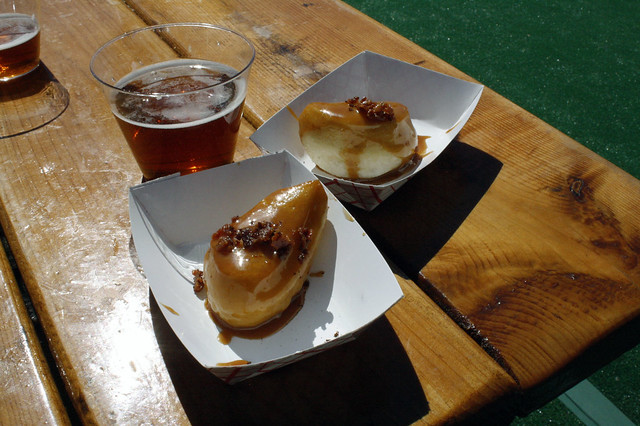 It’s not a true bacon festival without bacon doughnuts, right? Surprisingly, Traif was one of the few restaurants serving up a savory dessert. These yeast doughnuts were swimming in a dulce de leche and coffee glaze, then topped with bits of bacon. While I loved these sweet treats, I wish the doughnuts had more bacon. (Surprising, I know!)

Xixa had one of the beau’s favorite dishes of the day. Carnitas of pork belly & pork cheeks was served with a chorizo bacon marmalade. The presentation was super unique, as the bacon in this dish was a shredded blend of the aforementioned meats, but pressed together into the delicious (albeit tiny) rectangle of bacon-y goodness. Plus, the spices were a great compliment to the meat. 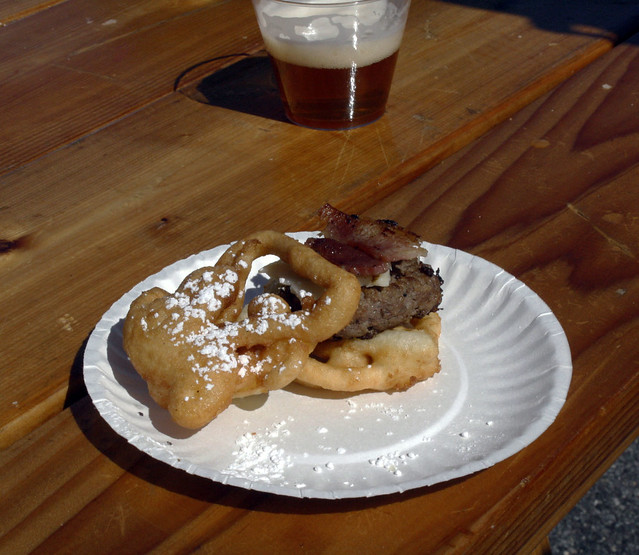 A Lil’ Bit of Fun was serving a “What the Funnel Bacon Burger,” a burger topped with bacon and sandwiched in between two funnel cakes finished with powdered sugar. This was a great concept but I was disappointed after my first bite. Maybe it was just my burger, but the bacon and burger were totally overpowered by the dense, sweet funnel cake. 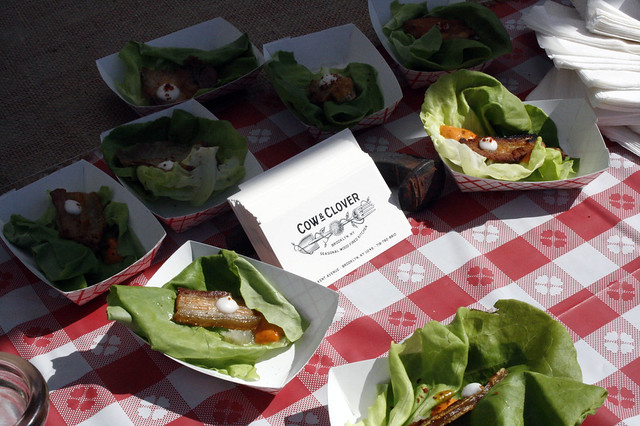 My favorite stop of the day was Cow & Clover. One of my fellow Bitches tried their brunch a while back to rave reviews, so I was excited to try it myself. Their BLT lettuce wrap was stuffed with pickled green tomato slaw, seared house cured bacon, sundried tomato and bacon aioli, buttermilk gel, and fried bacon skin chicharron. This dish was SO good! The lettuce wrap was simply just a vessel for the bacon and really let the meat shine through. The pickled green tomato slaw, aioli, and buttermilk gel were all such unique condiments and added the perfect amount of extra flavor. 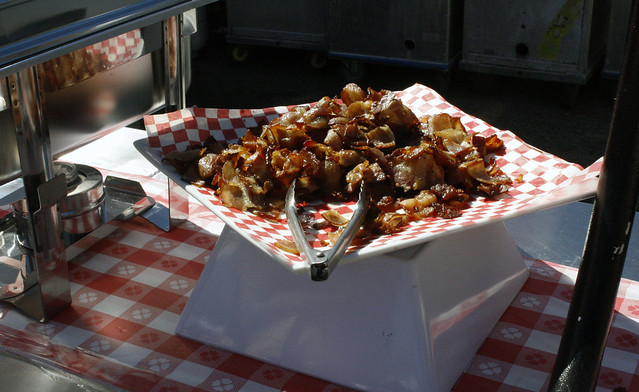 Our last stop was the famous bacon bar, where piles and piles of different kinds of bacon sit waiting to be eaten again and again. From applewood smoked, to black pepper, to maple bacon, there were so many varieties to choose from. The classic applewood smoked and black pepper bacon ended up being our two favorites, and we went back for multiple servings. 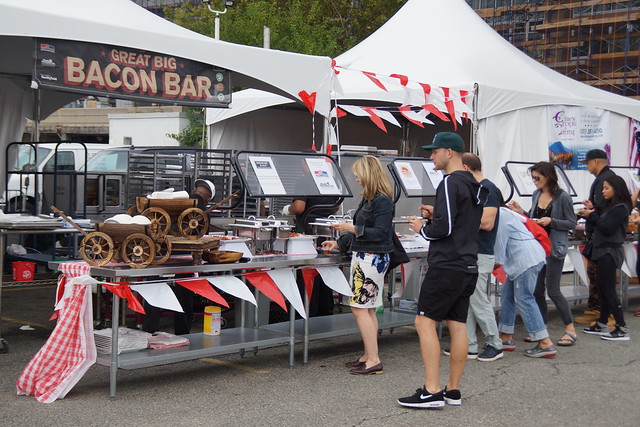 While mostly everything we had was fantastic, there were a handful of dishes where bacon was more of an afterthought. We wish it had been the star of the show in every morsel we tasted. It is called the Great Big Bacon Picnic, after all. Nonetheless, it was so fun to enjoy the day outdoors, sampling tasty bacon dishes from NYC’s best, with local craft brews & booze as an added bonus. This should be on your food festival must-list every year. I know it’s on mine!